„The design of the Veil is teaching us constantly. Alone we are nothing, but united we stand. A gifted mortal feels always somewhat incomplete as if a part of their whole is missing; we crave knowledge. An arcane animal feels the urge each and every day to finally ascend beyond the limitations of their mortal body created by magic means; they crave sapience. By allowing the spirit of the Veil to make themselves a home in our body both sides receive the thing missing to make their life whole; A partner from the other side. Being a Tainted, Bound, Rooted or even Ascended is the most natural thing in this world, it is what the unwritten rules of Prius want us to be.“
The Arcane Arcanum

It is in our blood to crave becoming an arcanist at some point in our life. From birth onwards our body feels strange, not strange in a bad way by any means; only a curious neverending sensation slightly tingling under our skin. A curiosity that is marginally but steadily growing as we grow up.   As we then witness by our surroundings, while we grow up, how nearly every adult around us has some kind of supernatural ability, like the ability to animate flames out of thin air, or freeze the air creating solid objects and and and, we eventually start asking ourself why we can‘t achieve similar feats? We begin asking our parents about what we fail to comprehend and eventually they consider us ready to answer our questions. They will be talking about the design of the Veil, about the vast arcane abilities you could possess; about how you acquire those and why it is a crucial decision for the coming act of your life. Your choice is final and needs to be a well thought out one.   If you want to become a mage just like the others, you have to accept the thought of letting a part of the Veil, in form of the sapient spirit of an arcane animal into our very mind and soul. And depending on how much we will care about our future coexistence, besides getting granted arcane abilities, we might be able to achieve a higher grade of relationship with the symbiont. But these special cases are of no matter for us as they require a strong bond with our future partner, a bond that can only get forged with time, care and love.

The ritual of accepting the Veil

When we found the specimen holding the magic of our desire and managed to forge a basic bond with the majestic beast, you will have the option to undergo symbiosis with the being‘s consensus. To initiate the ritual, you have to be the one initiating the first push, holding something sharp or spiky of your partner against your palm. In that case even the tiniest wound is enough to overcome your currently lowered barriers allowing the spirit of the creature to begin getting absorbed into your body. The process is painless but requires you to hold your partner until all of their spirit underwent the transition.   You will definitely know it, when your partner is inside you, they will make notice of them testing out their newly acquired voice. Trust me!

The powers of the Veil

Choosing the partner, you want to undergo symbiosis with is a task much more difficult than simply seeking a bondship. If you want to have access to certain powers, you sometimes have to leave your home going on a journey in search of the arcane creature most suitable for your desires. So are for example Gravettes nearly exclusive to the scorching sands, the desert that is Duvara, rendering this merciless environment worth a pilgrimage o those desiring to master gravity. But as every animal is an individual with a distinct personality, even searching for your partner in its environment can be a difficult task. Especially as it would be the very last you desire to undergo symbiosis with a spirit, who is not at all compatible with you. You could even risk experiencing traits similar of being Taken with the spirit trying to harm you to gain your attention. 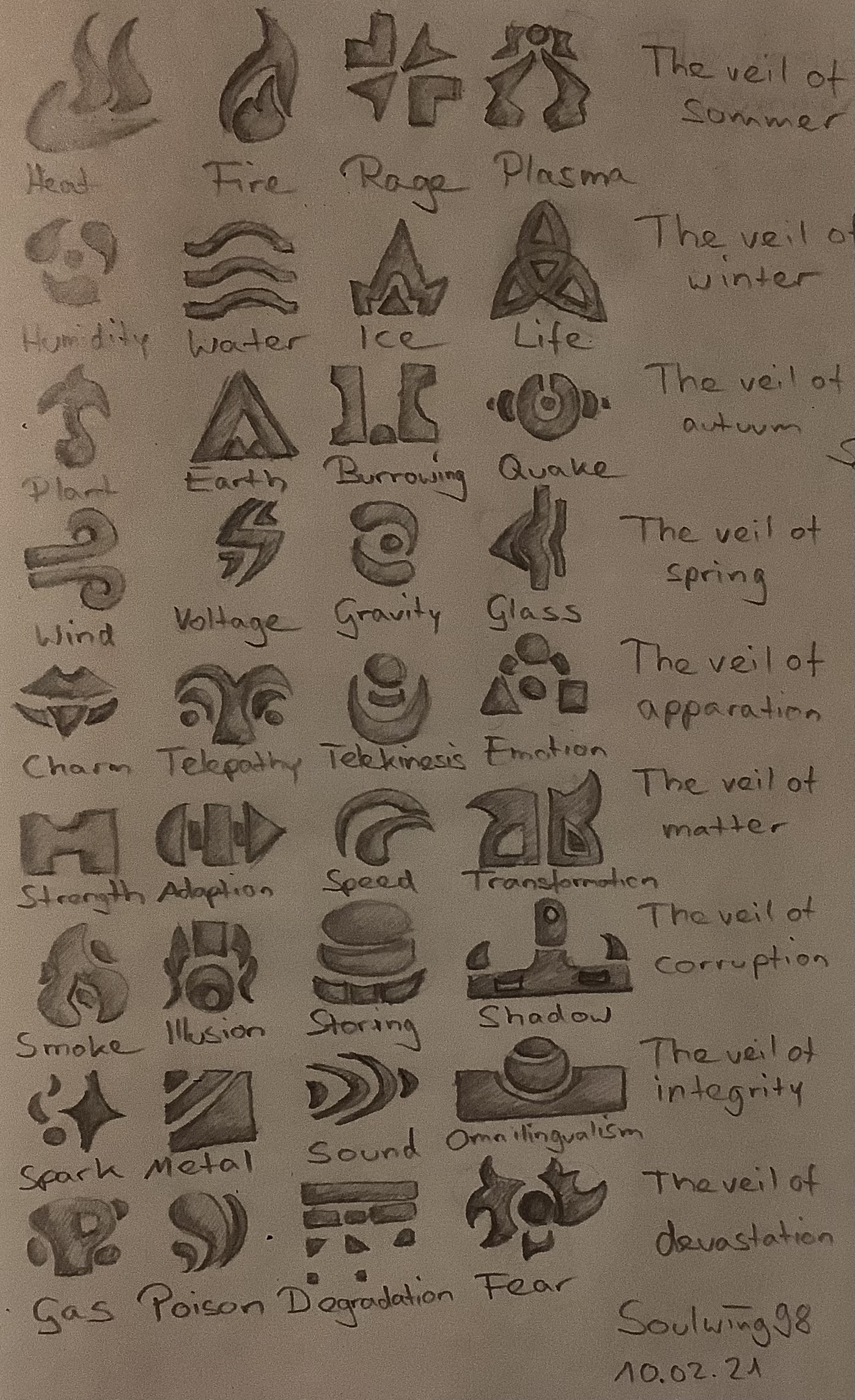 The arcane Symbols by Soulwing
However as much as it is important to choose the who, it is also crucial to think about the why. What ability would complement your life the most or buff out your most glaring mankos? What could a pilot get from being able to control plants? Questions that need to be considered when thinking about the most important decision of your life.
Especially as you can't undo nor switch your decision. It is the final step to complete you whole. Don't act prematurely!

Being a Tainted in Etherium

While the Purist country usually sees themselves as being better than others, Purists are actually the minority in Etherium. Most of the industry, agriculture and military is only possible because of the Tainted foundation holding the country up with their abilities. Most of the electricity gets produced by Livewires, and the list goes on.   While never openly claiming it, Tainted are the backbone of Etherium and are living therefore a good life just outside of the Purist's range.
Type
Magical
Children
Origin
Magical
Cycle
Chronic, Acquired
Rarity
Common
Affected Species

Being Tainted comes with a huge load put down on your imaginary shoulders never letting go ever again. The spirit, who delivered your magic will take your end of the agreement seriously, using your smarts, memories and feeling to evolve within your mind from a barely sapient voice quickly into a full-fledged personality growing and changing as you will grow and change over time. You two share now one body and that means you will be never alone again.   While the symbiote is under minimal affection unable to link their consciousness into your sensory system, essentially remaining blind to the world around them, growing affection not only allows them to actually witness your life outside of your thoughtscape, no. Growing affection allows you as well to grow your powers in unique ways. With assistant of your Veil-afflicted partner, you will be able to Overstretch your mental mind creating new and unique spells to use. Furthermore the deeper the affection with your symbiote is, the better and faster you two will be able to cast big spells.

"I would never be able to sustain a prison made out of animated fire without my partner. You can't hear him, but he is the one holding my channelled spells up mumbling the ritual to my soul allowing me to act independently.   Breaking my concentration won't break the spell; only knocking me out will. And good luck with that, filthy trespasser."
Duvarian fire lord

Being the most basic way of coexistence, being a Tainted comes with limitations for you and your partner. With Overstreching being the most important way of advancing your abilities, your fairly weak connection with your symbiote allows only for shallow mental explorations into the mysterious Veil. Only with much passion, you will be able to tear down walls specializing your abilities in unconventional ways. And as knowledge is power, each opened passage will put permanent stress on your connection eventually resulting in an Arcburn if you don't know your limit.   Your partner is also limited in their actions in this basic relationship. Only with much dedication and affection, they will be able to briefly take over the helm and interact with the world, but that usually only happens in situations of immense stress. To easily interact with the livings, the symbiosis must be at least be as deep as being a Bound arcanist.
All Content, including Artwork and Music, © ℗ 2019-2021 Copyright Soulwing98, unless stated otherwise. All Rights Reserved.
Cover image: by Vertixico
Article template
Condition
World
Kingsmaker
Category
Symbiotic Relations
Author
Soulwing98
Publication Date
7 Oct, 2021
Creation Date
9 Feb, 2020
Last Update Date
7 Oct, 2021
Visibility
Public
Views
307
Favorites
4
Comments
0
Work In Progress