"There are four major and four minor directions present on a compass. North, south, east and west as well as Northeast, Southeast, Northwest and Southwest. My army is too large for me alone to handle, so I shall repurpose the old rank of a general, retreating them back into Etherium to help me coordinate and lead our forces. In their place, there shall be commanders on the fields, inspiring personalities dividing the forces into eight armies leading the charge for this holy nation."
Marshal Ingratus Fide

Becoming a Commander has a few requirements, some of a formality nature and others showing devotion to the cause. First of all, a future Commander should have already served in the army before climbing the ladder to that of a Field sergeant. It is also advisory to be a burning follower of Vigor's religion, the Flaming Zealots and hold true to the war gods morals of a fair and balanced fight. A commander shall not enjoy crushing his opponents but subduing them in a non-one-sided war. The god of war will not approve of any ignoring his morals demoting them at an instance.

Field commander Belladonna Blight ... you are intolerable. I could have forgiven you carrying out the Blitzkrieg on Nemthi on the marshal's behalf, but no. I heard how you treated your enemies, how you enjoyed killing the helpless with fire and acid. I strip you herby of all your ranks and let Marshal Fide decide your remaining worth."
Vigor, god of War

But a commander shall not only fulfil the requirements on paper. A leader is only powerful if they have the full support of their subordinates able to hold up the morale in all situations.

"Who here has anything bad to say about Sergeant Vulpes? Nobody, that's right. We all owe our life to her cautious tactics and her having the balls to correct our former commander in preventing suicide missions. Let us all unify our voice for her to become our next commander. Let Vigor hear our all prayers!"
Lieutnant Finnery Borsello

Elsoi Tris Cosly (4979 - ) A cold-hearted tactician, who currently commands the south-eastern army of Etherium. Cosly got notorious for his outrageous plan to settle a victory in the 'battle at Lux Peak ' 4989. Using a majority of his army as a distraction to draw fire from the Duvarian army, cosly willingly sacrificed many good soldiers to surprise the enemy general with a small group forcing a surrender against sparing his life. Accompanied by his second in command, Field sergeant Vaani Mox, became the salamander the first instance of the General Field Marshal carrying out his orders supporting other commanders with his effective battle style.   Aurelia Vulpes (4990 - ) Soft-hearted and inspirational caracal commander of the southern army. Aurelia got popular amongst her people through her feats in successfully annexing the Duvarian city Lixor without even a single causality ... but her body getting blown to pieces. The first of her many surgeon visits piecing her together, again and again, earning her the title 'cyber angel' by her subordinates. Field Sergeant Finnery Borsello, the hot-blooded voice of reason, is leading together with Vulpes the southern army acting as the shield of the angel imbued by his subordinates with the important task to keep their beloved leader alive.   Belladonna Blight (4979 - 4987) Pyromaniac former leader of the western army got nominated by Marshal Fide himself before the requirements got added after multiple controversies. Her affinity to fire and destruction rendered her to Fide's go-to commander for all kinds of dirty work. Her putting her loyalty exclusively to the marshal and not to the gods caused her to lose integrity continuously until her annexing under Fide's secret command a majority of Nemthi scorching the lands with superior firepower ignoring the methods of Vigor for the final time. She got demoted immediately upon her return but got reinstated under Fide's direct command leading the Phoenix Squadron from that point onwards. 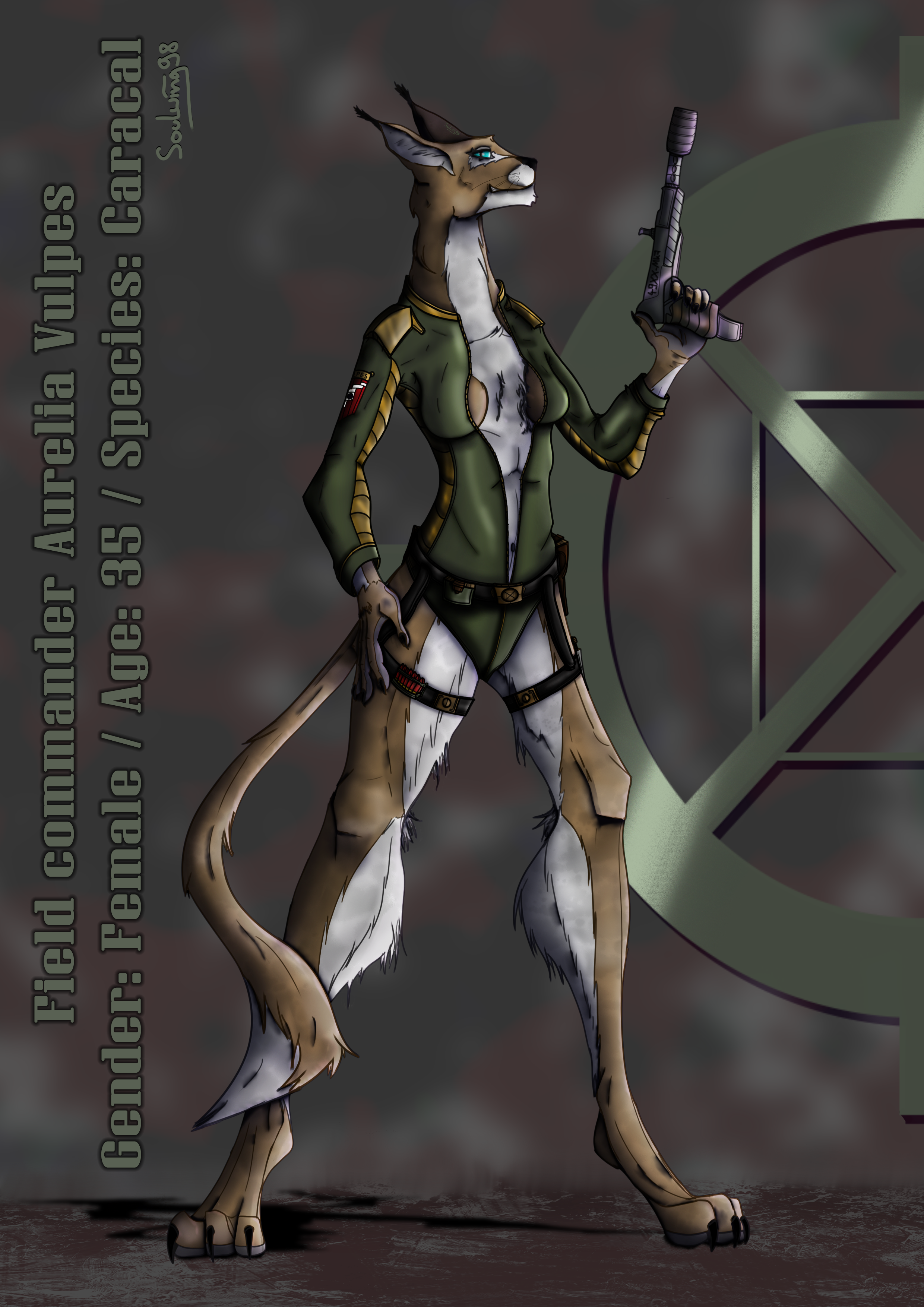 Etherium's army of peace consists, since its reformation into a superior military power under Marshal Fide 4979, out of eight armies, each lead by one field commander, a master on the battlefield. Every commander has four subordinates, called Field sergeants, who assist the commander in carrying out their orders each leading a part of the army. However, one of the Sergeants will act as the right hand, while the other three act more independently. A good commander has usually decent relationships with their Sergeants, as they are the true source of their decisive power and the backbone of the army.

To assure each commander to represent themselves truthfully, are the requirements of how to wear their uniform quite lax. They can alter the long-sleeved green and gold uniform to their liking, as long as their status in the army is still clearly visible and the suit is coherent looking with that of the army.

"I really like those long sleeves and the uniform is looking fancy on the other commanders, but I am really more of a no clothes type. ... I have to show my status and a no clothes policy is forbidden? Bummer. Well, can you at least tailor one of my jumpsuits and sew those fancy sleeves on them? You can? Great!"
Aurelia Vulpes