This Article is still a wip!
Needs: reformatting

Eidoz Island is located in the southern portion of the Coldol islands. Its not too atypical for an old volcano, except for maybe its size.

The upper west coast of Edioz Island is swarming with the 'small' colossi that the island is named for. The beasts are far more ravenous and active here than many of the sort one finds on the main land.
They all seem strangely fixated on Ciarn, across the ocean, causing them to congregate in the portion of the island closest to the city.

The remains of a fishing village called Jiah Zoau.
Some HavocBreakers claim to have seen people wondering the ruins of the old village still. All investigations into this have ended very poorly. 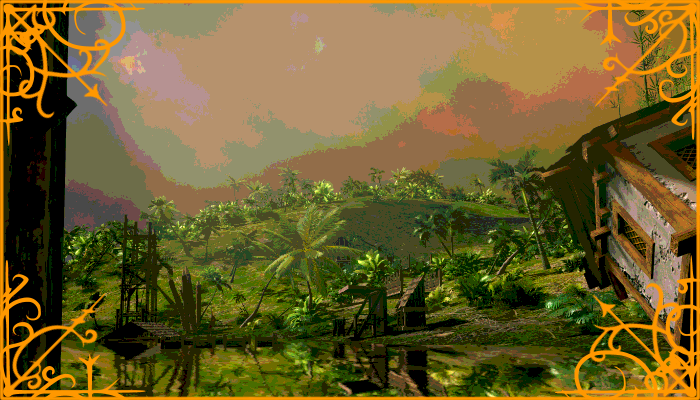 A seemingly endless stream of smoke. While the Ciarn Tech Consortium insists its a sign of oncoming eruption, they've been insisting that for longer than anyone's been alive...
Strange shadows and shapes can sometimes be seen moving around in the haze.
The once unpredictable and active volcano seems to be stuck in a pre-eruption state. Its activity seemed to freeze not long after the arrival of the Eidoz on the island.

A makeshift cloudrunner landing site where HavocBreakers land before venturing onto the island proper.
It's still used by colossi hunters, treasure hunters, miners, pirates and other sorts of reckless HavokBreakers. 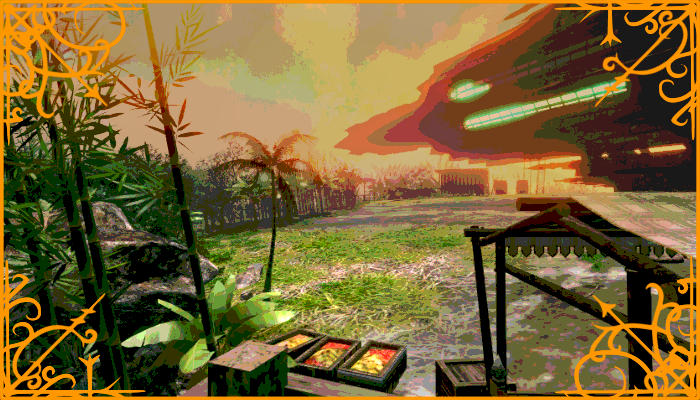 One of the few areas of the island one can still step foot without alerting the Colossi on the island, at least in the day time. Miners prize the area as a place to find materials that are in high demend in the Ciarn for electronic components.
One bad move and you alert the colossi to your location, causing them to swarm in from across the island. Its still unclear how they seem to always just know.   Apart from eldritch horrors, however, there are more mundane dangers to worry about as well.
Other miners looking to steal your dig site, pirates in the waters looking to steal your goods or your ship, and Coldol fishermen with their advanced weaponry and fighting skills looking to take a chunk out of anyone who'd come to the island.

A rich source of volcanic minerals and exotic wildlife that that can only be found in the area.   Cryolidhium can also be found there, though who's to say if such a thing is natural or not.
Eidoz Island
Open full size
An old source of contention between the Coldol Empire and the Ciarn Tech Consortium.

The story of Eidoz island starts in Ciarn, where the leaders of the Ciarn Tech Consortium came up on a dangerous idea. They wanted to clear out the Border District and make it an extension of the city proper.
This meant not only taking care of the Border Cartel, but also the numerous Eidoz type Colossi that stalked its streets at night.
The logistics of this where dangerous and more than a bit foolhardy, in both regards.   It was a well known fact that, unlike the larger Colossi, Eidoz go dormant during the day. So a great effort was made to move dormant colossi away from the city durring that window of dormancy. HavocBreakers where employed to either hunt them down or take them off the main landmass. But if they were to go they needed a place to set them, or there would be chaos (more so than this idea already was).   At first they tried simply dumping them into the, alread colossi infested, Zoen Ocean, though in the end they settled on a large unnamed volcano island in Coldol. Due to its unpredictable and violent eruptions it was thought to be uninhabited.
The thought being that the valcano would destroy them, and it was jsut close enough to reach in a day on a Cloudrunner.   And so the project began. This was before the the invention of Cryosynth, so many a brave breaker was lost to Cryolidhium poisoning. Though transport was safer than fighting the beasts, even as they slept they were a danger.   A few cartel bosses went missing around this time as well, though it was not hard to guess what had happened to them.   Unfortunately the area wasn't as uninhabited as they had believed. The village of Jiah Zoau was located on the island. The project was well underway when the village found out what was going on.
At first they tried to reason with the Havokbreakers, then with Ciarn when that led to fighting. The majority of the villagers refused to move and battled the colossi and HavocBreakers alike for a few generations.   Those that did leave, thouhg, told the story of what happened to them to every other village they could find in Coldol.
This transgresion, accompanied by unfair trade practices on the part of the Ciarn Tech Consortium and the Kingdom of Ncia, lead to the formation of the Coldol Empire and the fisherman's war.