I find your enthusiasm at the prospect of my demise highly unprofessional.
— Doctor Clarroy, without looking up from his work.

Clarroy is an emotionally detached medical genius.
He is an incredibly gifted surgeon, but finds the practice extremely boring, leading him to become increasingly dispassionate the more he is made to preform it.   His habit of talking much to frankly, and treating others as if they are too stupid to waste time on, leads him to make many enemies and very few friends.
He lost his medical licence to politics involving the Bhcu Cuhcil Medical Society and his, as they put it, 'irredeemable disposition'.   There are few who tolerate him and even fewer to whom he returns the favor.

Clarroy has a tall overly thin build that makes him look some what skeletal and alien. He's relatively weak and brittle, but has a very high pain tolerance.   Since his time working for the government he's gained a bit of flexibility and resilience, due to the daily exercise and carefully planed meals forced onto him by his overseer.

His smooth skin is various shades of blue and grey

Most of his life he wore the same sort of attire, the black, grey, and white of the Cuhcil U uniform.   Though after he began working for the government though, he has upgraded to a blue, black, and gold suit of high tech, light weight armor. Over the years upgrading it with Rovertech Armor.

Crizdov was born to bankers Abijail Clarroy and Jodvrey Forazd. As a small child he had a penchant for taking apart his toys to see how they worked. His parents would joke that he would grow up to be mechanic or a surgeon.   Unfortunately, although his father did send him to Diamond Lake Technical School in Lord Ciwn to learn mechanics, he dropped out after on year and enrolled himself into Cuhcil University. It was around this time he started taking drugs to help him relax or think differently.   Clarroy was a promising young medical student, top of his class. But his personality and mannerisms garnered him much disdain from his elders. They only let him graduate because he was so gifted, and because his best(only) friend was the school darling and fought on his behalf.


Hands down the most gifted student I've ever seen, and, frankly, I couldn't be more happy to finally be rid of him
— Doctor Bhilvot, head professor of Cuhcil University


Once they graduated though, the two had a falling out and the community elders took the opertunity to get rid of him by stripping him of his medical licence.   He resigned himself to doing labwork, and found he liked it, but was only at it a year before he was kidnapped by pirates.   He was with the pirates for 30 years before he was kicked off the ship due to his additude and was proptly arrested for piracy, due to Vondren's laws. Apart from a bad reputation he also gained two children durring his time as a prisinor to pirates.   His talents, though, were quickly recognized and he was commissioned to help in the war effort. He made an attempt to reconnect with estranged son right after the Vida Disaster.   Clarroy still works for the Vondren Military, doing minor experiments that fancy him and teaching young surgical students.   Due to his status as an ex-pirate he isn't widely accredited for his work. 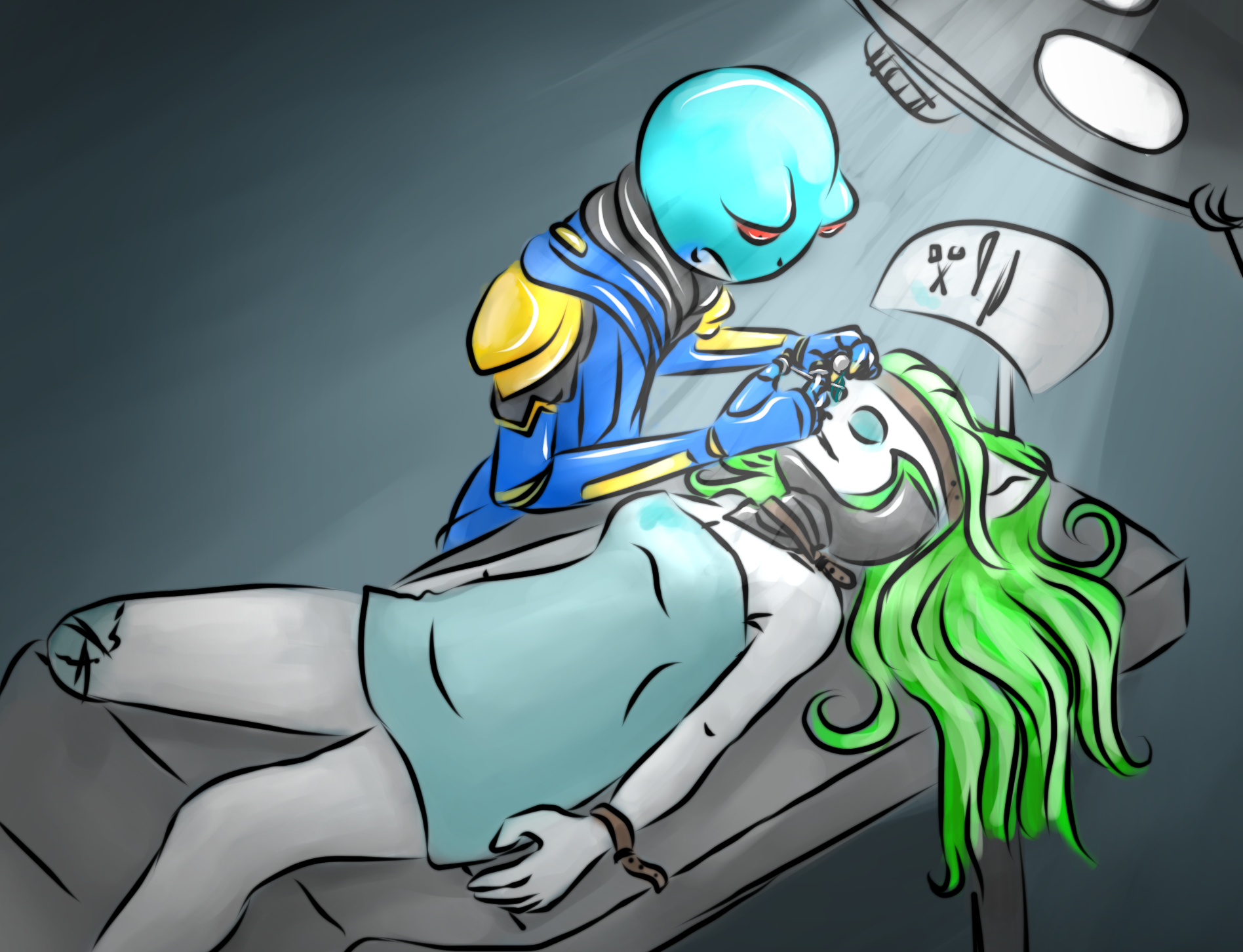 8ball Eye Get by Lengna

Studied at Cuhcil University of the Medical Sciences, top of his class.

Loosing his medical license, getting captured by pirates, falling out with Coar

Clarroy spent a good portion of his childhood locked away in his room, he never learned social skills or how to deal with people. He had one breife taste of freedom when he ran away to study at Cuhcil University of the Medical Sciences, but as soon as he graduated he was snatched up by pirates to be locked into a new room, and once he was free from that he waslocked away by the government.   Becasue of all this time spent in small spaces he has trouble in wide open areas or in massive crowds of people, often freezing up or having a panic attack if alone in such situations.

Incredibly sarcastic. He's smarter than most of the people he has to interact with and that wears down on him and his mood considerably.

Clarroy's philosophy on medical research is that it should be shared freely and pursued aggressively.   He's also more interested in truth than opinion, making him even odder to others than he already seemed.

Can not stand being called by anything other than his last name.

Boredom, mild loneliness, impatience, and a deep-seated desire for knowledge.

Clarroy enjoys discovering new things, and when his experiments produce results better than he'd been expecting.

He despises idiots, small talk, wasting time, and above all else, being locked in a room left to his own devices with nothing to do and too much to think about.

Snarky ass, rude, looks down on everyone, easily bored, doesn't show or understand his own feelings most of the time. Morality is dubious at best.

Clarroy is easily excited by and extremely focused on whatever project has his fancy. He is known to rushedly over-explaining about discoveries and things that interest him if asked something even tangentially related. He also has a bad habit of forgetting to eat or sleep when engrossed in a project, to the point of falling asleep at his desk or getting a bit faint. He works best when forced to stop and take care of these things, but will complain endlessly about it.   He has been know, on a rare occasion, to laugh uncontrollably when extremely excited. Though its so rare, and out of character seeming, for him that it catches people off guard.

Clarroy likes everything to be neat and tidy. Everything has a place and should be kept organized and labeled. Though he understands that when he's in the middle of a project some mess must be made, and some clutter must stay cluttered. Even still it is a contained and organized mess, everything is where is should be for quick, easy, and regular access.

He has a strangely personal dislike for the Four Es Corporation. When asked about it he will go on a rant about how terrible he thinks Emma Edwardc was, without really explain anything. 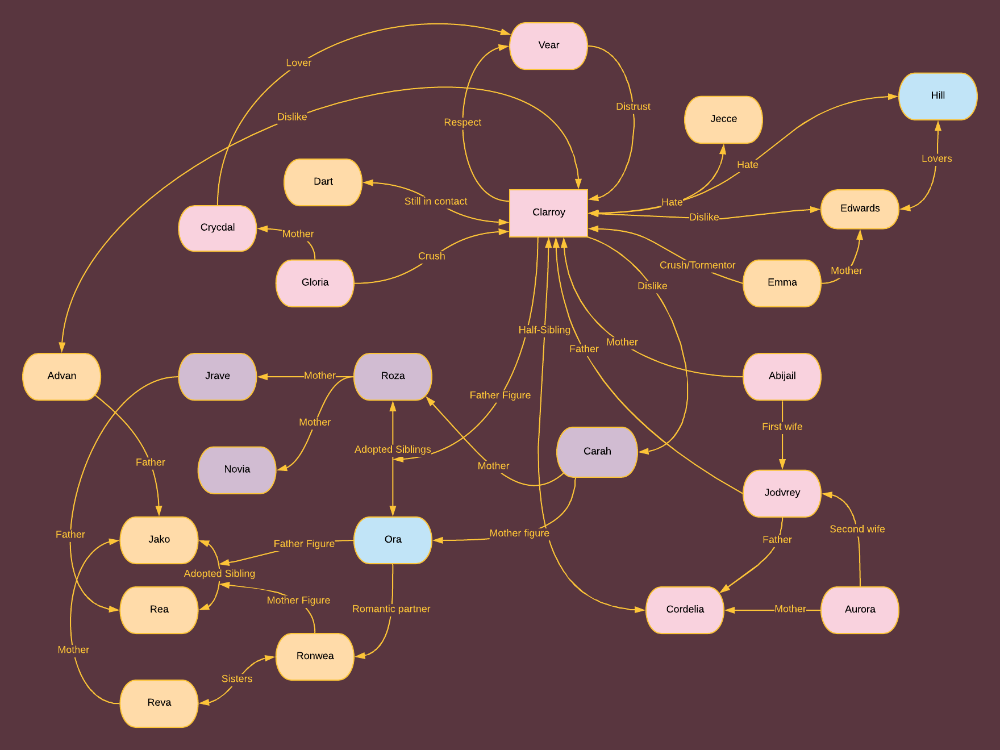 His ability to preform social is severally negatively effected by his Involuntary Caustic Superciliousness. If he's not made you mad with this attitude, you likely couldn't hear him.

Gestures a lot with his hands, usually in a dismissive and flippant way to those round him.

They met in medschool. Jloria found the aloofness of Crizdov attractive while everyone else found it irritating. Jloria was the only person in the school Crizdov could stand. 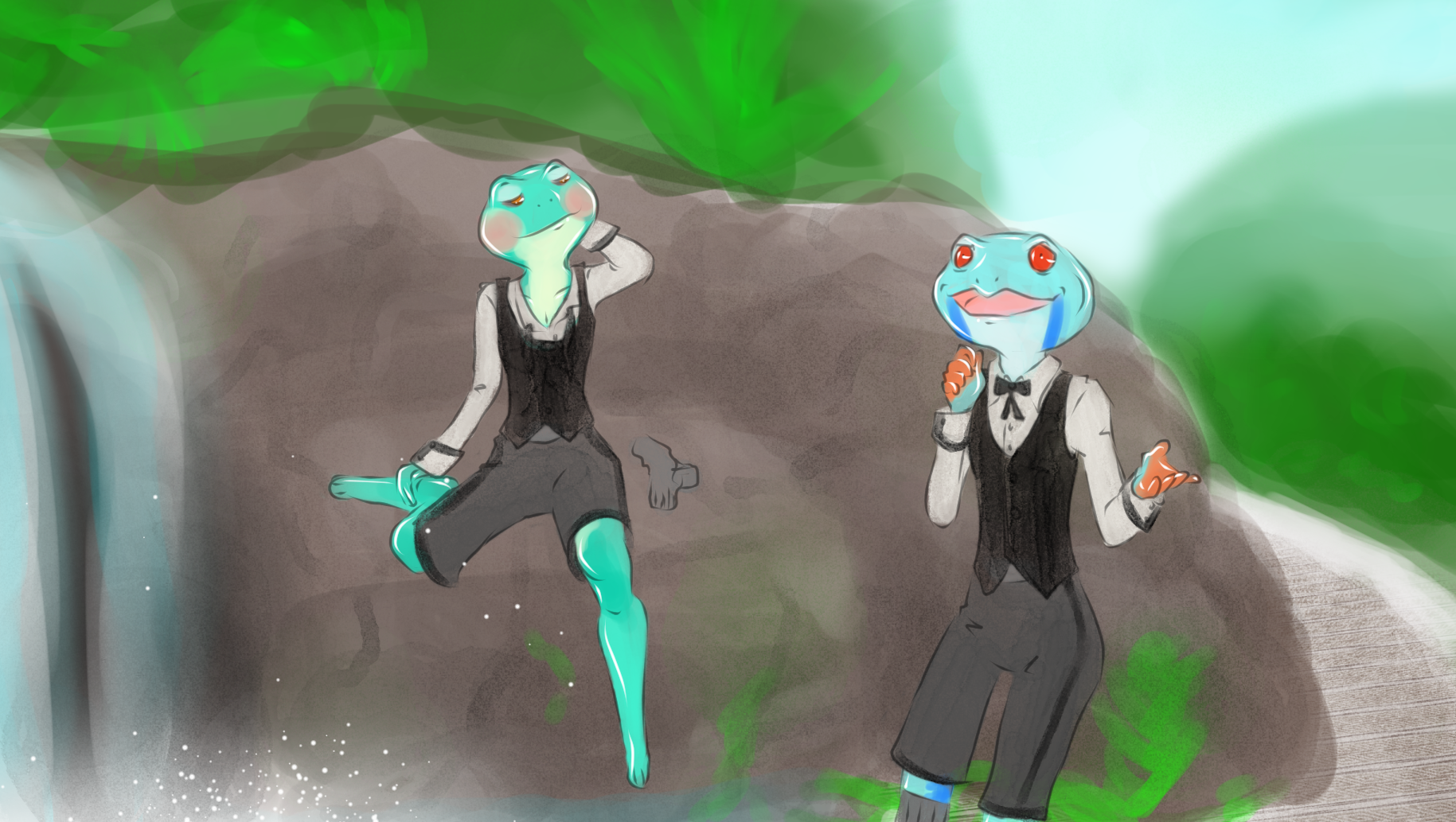 So much better by Lengna

Some girls just like the badboy, and to Jloria that's what Crizdov was.

They have a stoic respect for each other's accomplishments, but Clarroy's excitable outbursts and boredom make him more a research subject and liability than friend. The two seem to both fear and respect each other, in a confused and complicated relationship that neither seems to fully understand.   After the escape of Bori2 and Vear's 'rebirth', the two seem to suspect the other has done, or is doing, something to undermine the project.

Clarroy is a prisoner of the Vondren Military, and works on what he's told, where he's told. Vear was assigned to keep an eye on him and carry out the second half of the Bori Project.

The detailes of the Bori Project

They met in med-school where Clarroy mostly ignored Darc, who looked up to him.
They met again later when Clarroy was rented by the Raycravd Orchestra to preform a life saving surgery on Darc. Though Clarroy claimed not to remember Darc, he seemed open to talking with him and keeping in simi contact.

Darc is ever hopeful and fairly desperate to have friends outside of the syndicate, Clarroy tolerates him because Darc seems to excuse his abrasive personality and gets along well witn Ora. He also has a grudging respect of Darc's accomplishments.

The two never really got along, but that isn't rare for either of them. They got around it by barely speaking to each other, instead using Vear as an in-between.
Though when Vear had his 'accented' they had to work together to bring him back. Advan, getting tired of the disrespectful and very wordy Clarroy, threatened something important to him. Turning himself from an annoyance to an enemy in the mind of the Doctor.

Both are willing semi-prisoners of the Vondren Military and work at West Winds Medical. 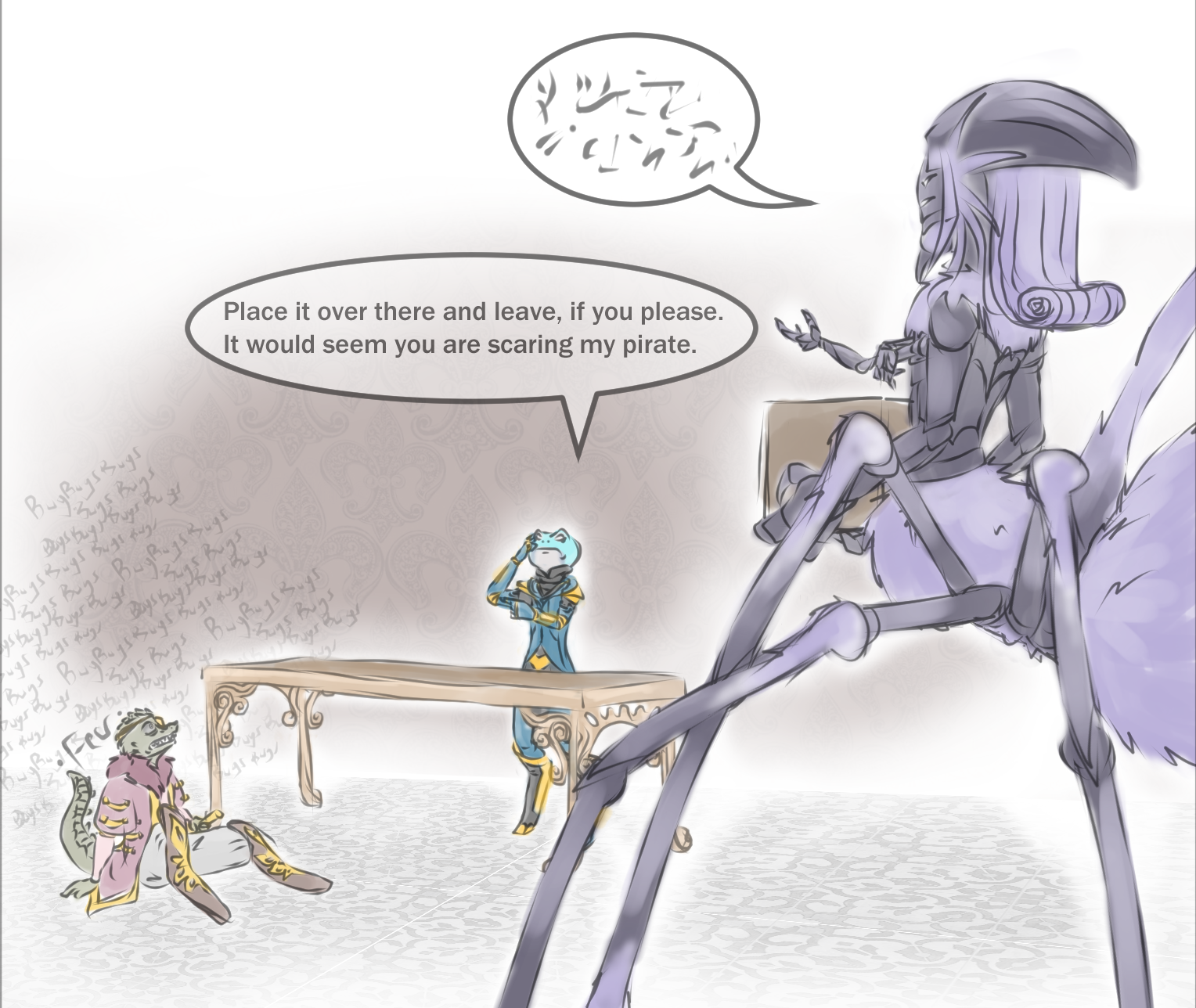 You're scaring my Pirate by Lengna

Clarroy for Terri: Doctor DinDinna (His attempts at pronouncing her name failed enough that he gave up on it)
Terri for Clarroy: T'ucsur'Cror'Ruae (Her best attempt at his name)

They get along well enough, better than they do with anyone else at the facility as Clarroy has no fear of her and Terri isn't bothered by his sarcastic demeaning way of talking.

They had a bit of a strained relationship ever since Clarroy was 11. The last time they spoke was when Clarroy was sent to Diamond Lake Technical School at 15.

They have never met. Cordelia knows he existed, while Crizdov has no idea he has a sibling.   Cordelia has often thoughts about one day meeting her half-sibling, but has no idea how to find him and is a bit nervous to look too hard into it.

It's Mar's job to keep an eye on, and cater to, Clarroy. He's been at if for a few years now and has gotten used to the old man's fussing. Clarroy is often annoyed by Mar's chatter.

Jordan and his friends looked up to Clarroy in school. He was an upperclassmen who seemed to know more than the teachers and didn't back down for anyone. They had a falling out though when Clarroy broke their mutual friend's heart in an overly callous manner. Jordan took it personally and actively helped his father and the Bhcu Cuhcil Medical Society strip Clarroy of his licence.   After Clarroy started working for the Vondren Military though, Jordan made attempts to somewhat patch things up. The two have gotten along as colleges, for the most part.

Dazani spends most of her time playing in Clarroy's lab when her mother is working. She learned to speak Ailja from him as well as JauVonian ways, especially Cuhcil Traditionalist views.

Clarroy tolerates Dazani's presence as much as he tolerates anyone else, which is to say hardly at all. But to her that's a step up from how others treat her, like a some monster.

Wealth Although he doesn't technically earn any money, he is usually provided with the tools and resources he needs to live comfortably and do what he enjoys. Though he is never allowed to leave of his own volition.


While in medschool Clarroy often spent time telling Jloria all his ideas, as she seemed interested in listening.
Clarroy's response to his duaghter asking for help with her own daughter, Novia. His answer is basically 'don't contact me again', but wordier.
After the war Clarroy stuggles to peice his son back together.
Clarroy reflects on his life as he waits for its end. 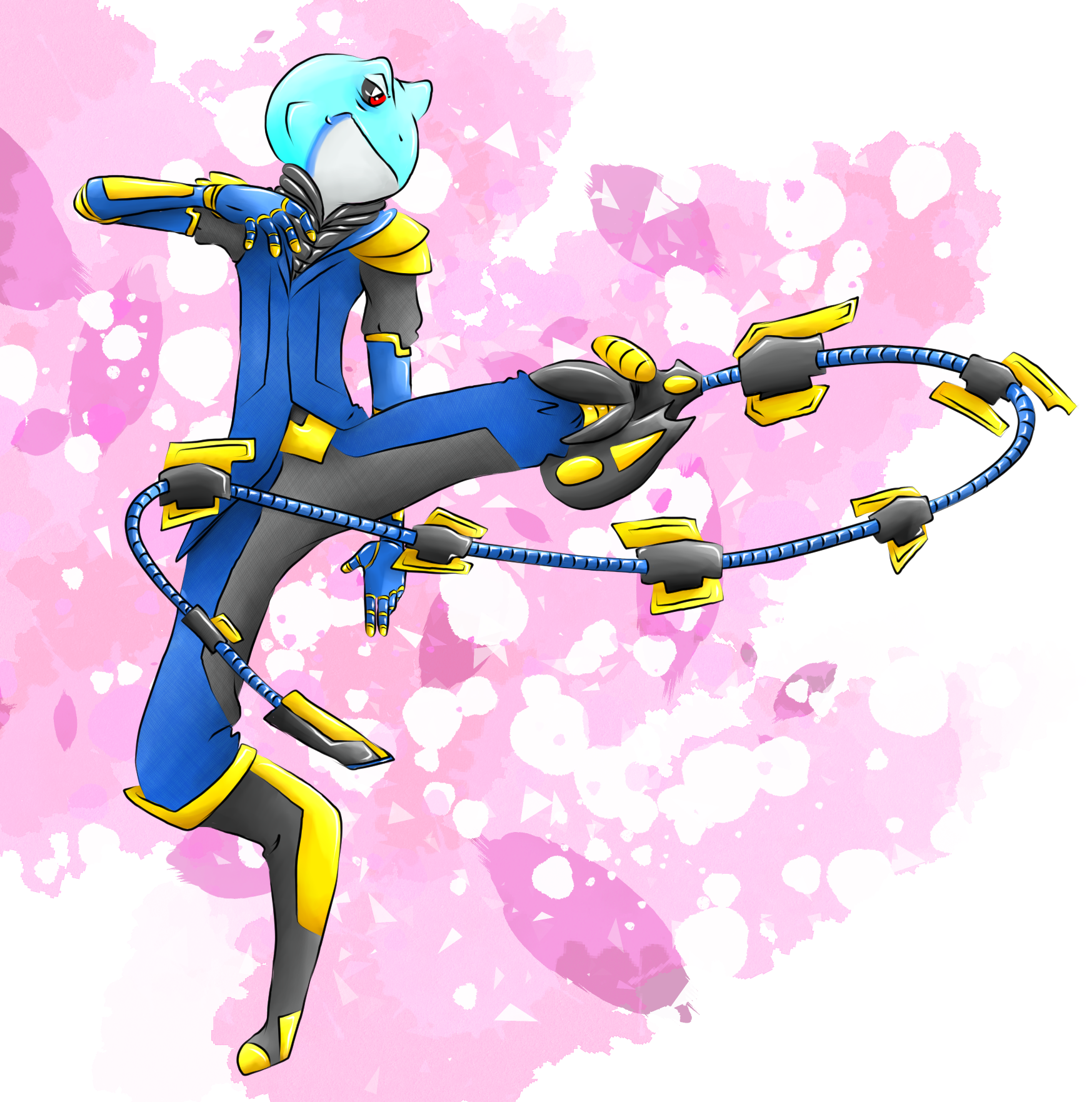 Chiuov
Click here to see more form the Kriocesocr System!
Or you can peep other tangentaly connected worlds in the Misc World Index!
Consider supporting Lengna on Ko-fi.
Cover image: Baz and Merry2 by Lengna
Character Portrait image: Follow you Down Ch.1 Pg.5 by Lengna
Powered by World Anvil