The world will be pitch black. You will awaken in a hallway, alone and cold. The walls will press like sharp knives against your skin, and in the distance you will hear nothing but the echoes of the screams of people long gone. You will be forced to walk the maze until your feet bleed, until your skin grows tight against your bones as you slowly starve. You will rot as you wander the labyrinth of entrails for eternity, until you are nothing more than an empty shell of what you once were. That is the fate that awaits you, and all who follow your path.
— Priest of Kirïal to Barin Shef-sek after his sentence.

In the Saohri mythology, Almayot is the Great Beast, the incarnation of the empty, primordial state of the world. An otherworldly, unintelligible being who seeks to consume all that exists, and return the world to nothing. The Gods have kept it from destroying the world more than once, but even their limitless powers cannot kill it completely- one cannot erase what comes from nothing.

Almayot is described as a monstrous beast, with thousands of legs, millions of eyes, a long body that coils and slithers and slides in a large, black mass of cold sharp scales. It knots itself together, locked away from the realm of mortals, beyond even the realm of Gods. Harund keeps watch,

The Fate of the Unjust

There are a few legends about what fates await those who end up trapped in Almayot. All will suffer alone, walking the eternal maze of tunnels and streets that make up the beast's insides. The Book of Ikaron describe tunnels of rock and dirt, suffocating and weighing on those who desperately try to claw their way out. The Book of the Dead describe a limitless town with empty streets, where a black sun shines and faceless crowds drown any who attempt to fight its current.


All legends describe the crushing feeling of isolation, the eternal suffering of those forced to walk through Almayot alone. Since the coming of Magic, there are a few accounts of people having been brought back from Almayot. However, time passes differently in the stomach of the beast, and all who are resurrected are only shells of who they once were. Often, they die once more mere days after their return amongst the living.

The Danatelian culture has a dual conception of the Afterlife. The natural fate that awaits all who die is too suffer eternally in the entrails of Almayot, the Great Beast who seeks to consume all. But in most cases, the souls of the dead are saved from this fate by Kirïa the Silent, who escorts their souls to Ayshabiu, the Isles of Eternal Rest. 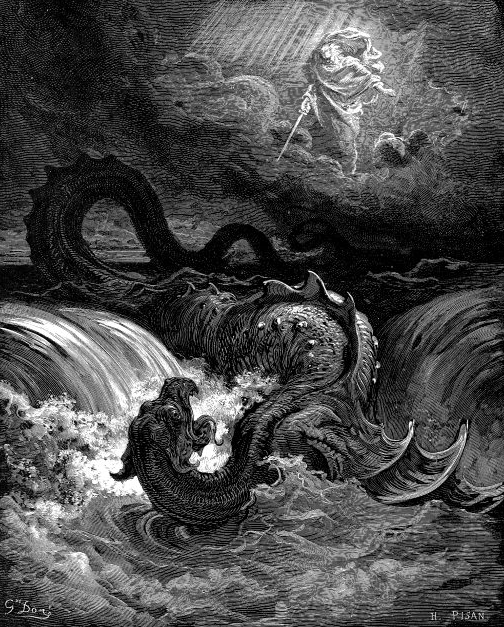 by Gustave Doré
Harund slaying Almayot as it tries to escape

Saohri scriptures rarely talk about the Nihearal. Only the Book of Ikaron holds any mention of it, and it says only that one day Almoyt the Devourer will triumph of the Gods. It will swallow the sun, the dead will die once more, it will eat and eat until all that is left is the Beast. It will devour itself, and from its death a new world will be born.

Hey everyone! Back with a new article, this time one of the two afterlives of the Saohri religion. Writing this reminded me of just how much work I have to do with my pantheon, and I should really get to making my to-do list for worldember.

This article was written in the context of the Afterlife Flash Challenge.

Wow, the quote at the beginning is just spine-chilling. I'm so glad that most people are saved from that horrible fate.

Oh, thank you! I tried my best to be as evocative as I could, I'm glad it came through well :)