Within The Atlassian resides one volcano: Mount Stoll. This volcano is known for housing Stronghold Geisl, a stronghold engulfed in myths and legends. Whispers are going around that a mighty dragon once lived there and vanished before the world turned into chaos.   Mount Stoll is a colossal volcano, larger than many have seen before. It is possibly the largest on Hesli. Standing tall at roughly 5,000 meters (16500 feet), it's the highest volcano recorded on Hesli. Its crater is vast at almost 1,000 meters (3300 feet), packed with viciously bubbling lava.   Right in the middle of the lava lake, the tip of a watchtower sticks out. However, at first glance, there seems no way possible way to cross to the tower.

In the ancient days, Mount Stoll began as a relatively small volcano. The, at the time small, lava lake bubbled away graciously and was the centre of the world. It was the favourite spot of Luna. She used to meditate near the lake since the bubbling sound of lava allowed her to fully focus. Some said that her wisdom came from the lake.   Later, when she became the Dragons' guiding figure, she built a castle atop the lake. For dragons, it was easy to enter it as they could fly. However, there was also a secret portal to the stronghold for those unable to fly. Her philosophy was that everyone should always be able to ask her for advice, whether be it a dragon or otherwise. The location of this secret portal has been lost in history since her disappearance.   Over time, Mount Stoll erupted numerous times during The Draconic War, growing colossal with each eruption. It was as if the volcano and lava lake were enraged by the events and loss of their beloved dragon. With each blast, parts of the stronghold became one with the lake. In the end, what was left was the tip of one of the watchtowers from the fortress. After the war, the volcano has erupted twice only. It has maintained its current status for thousands of years now. 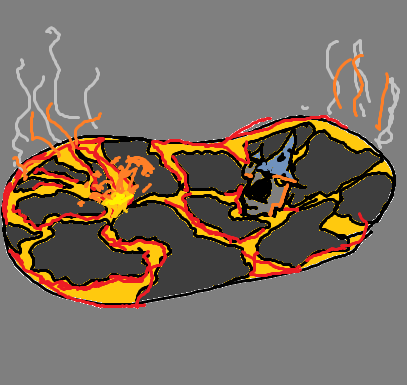 Answering: "an area or geographical landmark wrapped in myth, legend or superstition"
Visit Sh4d0wPh03n1x's Competition Page Check all other answers to this prompt Competition Homepage

Intersting how the volcano grew over time and a good link with the Luna article :) Love that you made an image for it ^^

Thank you! It'll be one of the major plot points for my players in the far far faraway future. ^^ Hehe, yes, that image is just brilliant imho. Thank you Annie!

The image is amazing, I love it so much. And a kilometre wide? Awesome! (I don't actually know how wide volcanoes are so it could be really small)