"This is your new home, puella."   As she stepped into the darkness within, the area began to glow with soft light, as bioluminescent flowers on the roof blossomed.   Elyithon was surprised, "I've never seen it welcome us like this before. The tree must like you, Naiara."   She looked around as more flowers bloomed and a fair light filled the interior. It looked like an old barracks within the tree, with private quarters in the back for perhaps an officer. It didn't seem like anyone had been here for quite some time and it would require some tidying up.   "The Vigilate no longer stays here? What sort of troubles does this place have?" Naiara asked.   Elyithon entered the main chamber and walked about the room, "Beyond the rangers saying they felt like they were being watched or hearing voices, there's practically nothing that threatens the area. I've had no issues taking rest here, nor encountered anything unusual. I've always thought of it as a retreat brimming with life. It is a very fertile area, probably why this elder tree got so large, although I'm sure the druids had some part to do with that as well."   She saw in the opposite corners of the main chamber, basin-like depositories with a vine dripping into each. One collected freshwater, and the other sap, "This is so very unnatural."   Elyithon chuckled, "Standing with a huge maple-leak oak tree with bunks grown from the walls themselves, of course, none of this is natural. I can't quite explain it myself, but druids have a way of shaping nature to suit their needs, and now may they suit yours, like a home away from home."


Druiarbor was claimed to have been enhanced home belonging to an old druid, with amplified growth as well as shaping within for various rooms and furniture connected to the tree.   Vermin seems to not be an issue here, and creatures like the gryphus will not approach beyond the stone circle, preferring to rest on the rocks surrounding the grove. Birds and squirrels nest in the canopy, the tree providing for them just like it does for its guests.

At one time it was a home of an elder druid, but after as uncertain amount of time the Caelumari Vigilate repurposed this place as they took refuge here and used it as one of their stations in northern Zephyrus, but some inhabitants claimed it was haunted due to strange noises and other unusual circumstances while others like Elyithon had no issues resting within.

The living room is a long room, with a pillar in its center. A door at its west, and fireplace to the south and the kitchen and pantry to the east. To the northwest a small private restroom. To the northeast is a depository of fresh water, and to the southwest, a delicious maple sap. Bunk like alcoves were shaped from the walls around the chamber.   To the north is a room reserved for an officer of the Vigilate, formally the druid's personal quarters with a bath and closet on either side of it. The bedroom also serves as a study, with a desk and bookshelves around the chamber. Finally there is a large bed at the center of the room. Naiara Nesethal claimed this room as her quarters after spending some time there and after the departure of her companions Malyrra and Sihnion.

The room is illuminated by the fireplace when lit, as well as Moonflowers that grow on the ceiling, but are not guaranteed to bloom and emit light for everyone that enters. They emit a soft white-blue glow.

Shelving, stools, tables, and bedding are part of the tree, although guests within often lay their bedrolls out for additional comfort in the bunk like alcoves. Windows are covered by large leaves, and with a gentle push, the swinging branch would open, only to close once more at night.

Personal effects left by the druid which are of little value to anyone by the druids of Arventus.

The tree is capable of defending itself with roots and vines, capable of grappling enemies and strangling them.

The stone circle is believed to contain certain wards that keep beasts and vermin away.

Stone fireplace, Vigilate Beacon on the outside of the druid stone circle.

First there is a circle of stone pillars, the majority of which is still standing but a few have collapsed. Within the cirlce grows a ring of trees, and at its very center is an unusually large maple-leaf oak.   The tree's structure is unusual but keeps an organic look to it. Tree like pillars exist in the center of each room for additional support, while the interior walls have an arch like design.

Naiara Nesethal was stationed here by the Vigilate at 476 of the Fourth Age, for ~16 years.

Alternative Names
The Haunted Great Tree
Type
Tree house
Parent Location
Zephyrus
Environmental Effects
Although it is unable to provide warmth during the colder periods, it seems to be well insulated in trapping the heat provided by the fireplace, the windows sealing shut during such times. During the warmer months the interior is well ventilated and cooling moisture subtly fills the air.
Owner
Naiara Nesethal
Owning Organization
Caelumani Vigilate 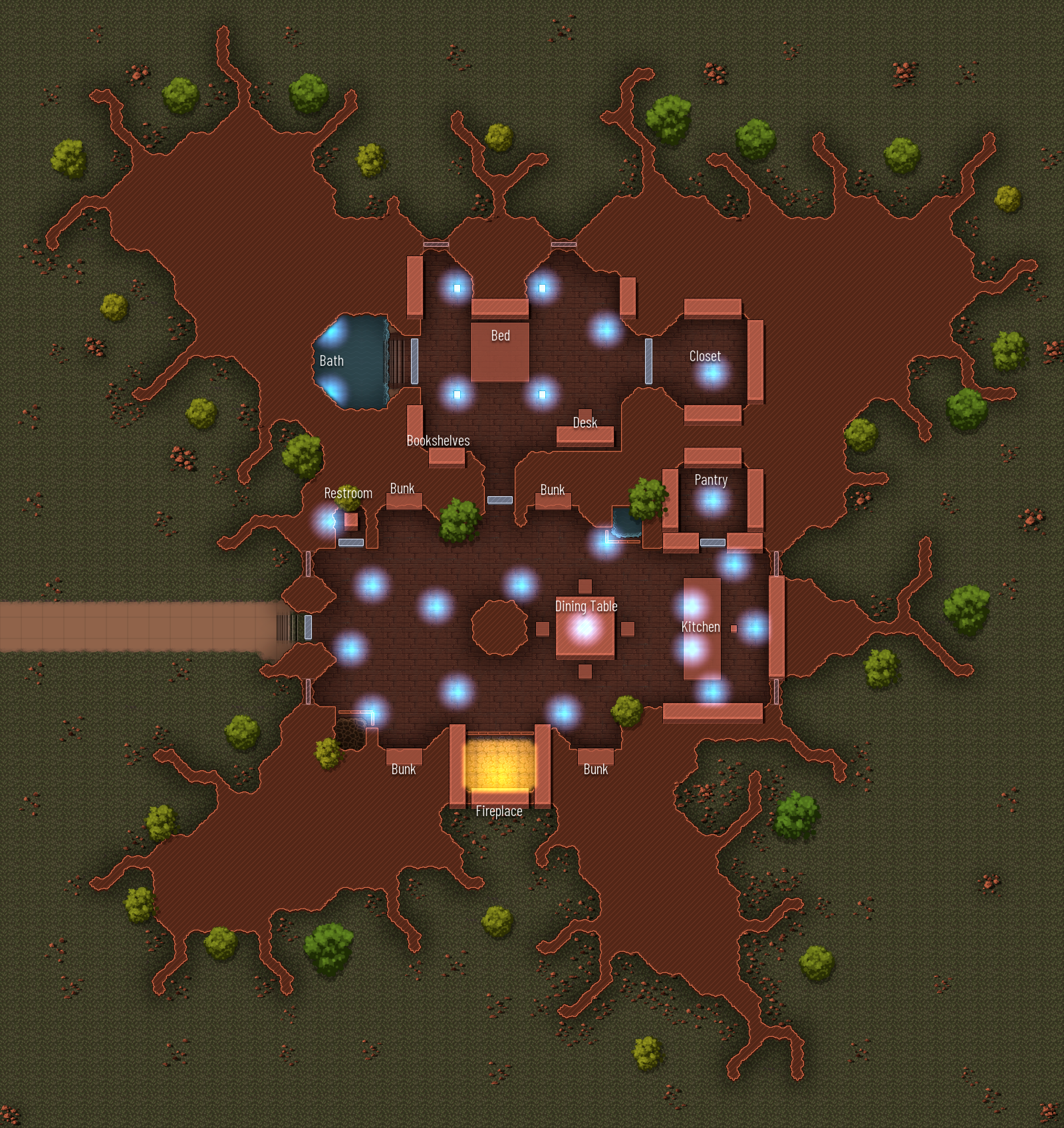