Staring down at the bottom of his mug, Vladimir took one giant sigh. Hoisting his cup into the air the dwarf cried out "Innkeeper! Another drink for Vladimir!" The innkeeper just shook his head amused and slid the new mug of ale down to the dwarf monk. Vladimir was quite happy and eagerly took the foaming mug into his hands and took a long and hardy drink. Master Breas was gone, and with that, Vladimir's place at the monastery. The old man was the only real thing keeping him there. His guidance and wisdom was everything to Vladimir and without him...nothing. Looking at the bottom of his mug, the dwarf raised it high "Vladimir shall have another!"

Living in the Northern Hills made Vladimir quite hardy. Living the sailor's life helped him build up even more strength, and becoming a monk kept him quite healthy. Now though, with all the drinking he's put on a bit of weight. He's still pretty agile and strong, but he now has a bit of a beer belly to go with it.

Vladimir belonged to a clan of hill dwarves that lived in the Northern Hills, which bordered the Northern Wastes. His clan was under constant threat from raiding orc tribes, frost giant clans, and other goblinoids. Even though the dwarves of the Iron Mountains and the knights of Rheged helped the hill dwarves in the defense of their homes, Vladimir had, had enough. Venturing south, Vladimir wound up on a ship crew in Skara Brae. They'd venture to Finnias, Dalraddia, Rowland, Hebrides, and Gondwana for reasons such as trade and transport. Vladimir's happy sailors life wouldn't last though. He had taken up to drinking, and it almost killed him and the rest of his crew. One day he was drinking at the helm, and then a storm blew up. Vladimir lost control and floundered the ship causing it to perish, but they were close enough to land for the crew to make it to the beach alive. Ashamed at what he had done, Vladimir wound up in a tavern to drink his sorrows away. He was found by a monk, who took Vladimir up into the Blue Mountains where their temple, and griffin sanctuary was. Vladimir would study under him and learn their ways. That wouldn't last forever either however. Vladimir's master eventually passed, and having the one stable thing in his life gone, Vladimir found his place back at the bottom of a bottle. The head of the monastery, Master Turi, was forced to evict Vladimir from the monastery because his habits would not be corrected. Vladimir left the temple and found a tavern in Clonabridge. There, he'd meet a half-elf barbarian, human paladin, firbolg druid, and human ranger. His life would change once again…

Growing up in constant fear of what the next day would bring, Vladimir has embraced a lifestyle and philosophy of living every day to the fullest. He believes that every day needs to be enjoyed no matter the circumstances. In his eyes, no one can control or change what has already happened to them. But what they do have control over though, is how they deal with it. They can either let it bring them down, or like Vladimir, make the most out of a crappy situation.

Optimist, always tries to make the best out of a situation. Has a great sense of humor.

Booze. Sometimes isn't too observant of his surroundings.

Likes to speak in the third person a lot. Has a tendency to break the fourth wall. 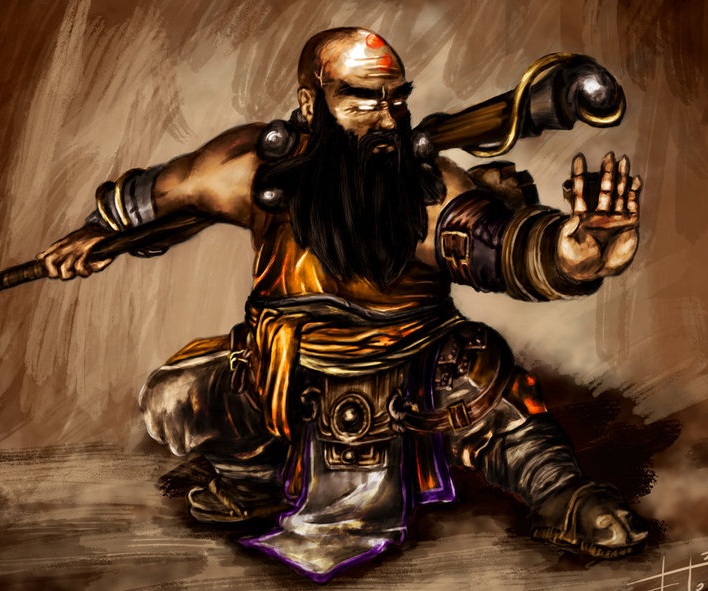