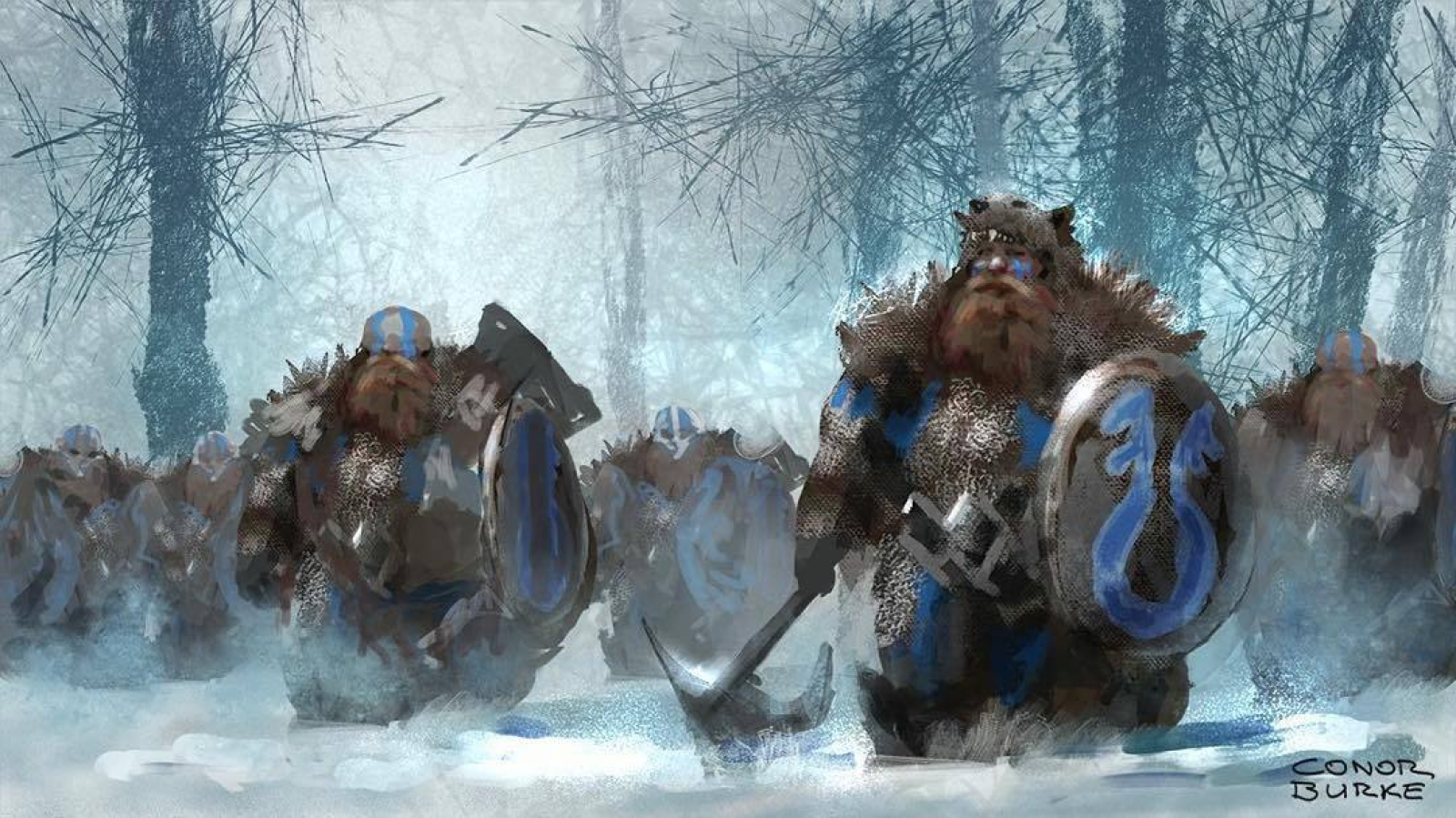 The dwarves are a strong and resilient people that can live well over 400 years. They are a loyal and determined people who are true to their word, and quite stubborn. Their long life span gives them long memories which helps them re-call events from centuries ago as if they were yesterday. This also enables them to recall the most minor of slights. The dwarves are not a forgiving people and carry immense grudges over those who have wronged them. They are also skilled and gifted artisans that prize their work above almost all else.

Dwarves tend to live to around 400 years old. They typically stand anywhere between 4 and 5 ft. tall and weight around 150 lbs. Like humans, dwarf females tend to live longer than males. In the aspects of reproduction, dwarf females have a period of heightened fertility that comes around once after several months. Dwarves don't breed as often or as much as humans do, but they certainly do more than elves.

Like humans, dwarves reproduce sexually. Dwarf females have a period where they're extra fertile once every months. This is due to them having longer life spans as humans; so they don't have to reproduce as much. Dwarves still certainly reproduce more than elves though.

Dwarves mature around the same rate as humans, but don't really hit full adulthood until their thirties or forties. It is unclear when the dwarven pubescent stage begins because dwarf children begin growing beards at around the age of either 6 or 7.

Dwarves are an omnivorous species in that their diet consists of both plants and animals. Even though this is so, dwarves tend to have quite the fondness for eating and drinking more meat and ale than eating healthy green food.

Most dwarven societies are divided into clans. These clans having been built upon strong familial ties and political alliances. Each clan is led by a hereditary ruler who in some way is descended from the founder of said clan. Loyalty to the head of the clan and the clan as a whole is highly valued, and often times dwarves will side with their clan over anything else. A dwarf without his or her clan is nothing. If a dwarf commits an act so heinous and taboo that results in them being disowned from the clan, it is a fate considered worse than death.

Dwarves have about the same sight and hearing perception as humans, except dwarves have the ability to see in the dark. This is because of how their race began as a subterranean species and they adapted this darkvision over time. They also have a keen geological knowledge over just about every rock and stone they come across.

Dwarves highly value the ties between family members and friends. This has helped them form tightly knit clans, in which the elders are expected to provide either leadership, wisdom, or advice. Elders are highly respected along with clan founders and ancestral heroes. This has given the dwarves a bit of a cult of ancestor worship. This reverence for elders seems to carry over into dwarven relations with other races, as dwarves seem to also greatly respect elders of non-dwarven ilk.

Dwarves trace their lineage back to Dain and Vistra, the first dwarves. They had three sons: Brottor, Bruenor, and Baern. From these three sons the first dwarf clans sprung, which are still in power today. The dwarves are in a loose confederation in which one of the three clans rules over a mountain range. Each clan has three lords that rule over a dwarven mountain fortress. From the three original clans sprang numerous others that populate the dwarven realms.   The dwarves made their first appearance after the First Great War, claiming that they had been in existence and awoke before the elves, but remained in their subterranean cities and didn't choose to appear until now. As one can imagine, this is highly debated by the elves. As the dwarves spread themselves throughout Laurentia they came to inhabit the mountain ranges, with each clan ruling over their respective territories. The Frostbeard Clan came to rule over the Caledonian Mountains, the Ironfists possessed the Iron and Dark Mist Mountains, and Clan Rumnaheim came to acquire the Blue Mountains.   Dwarves lived in relative peace with the other races of the world until the Great Catastrophe. The Great Catastrophe ushered in the fall of the great human kingdom of Ceredgion. After said downfall, the orcs and other goblinoids marked their entrance into the world and carved a bloody swathe over the once great kingdom that became the Northern Wastes. The dwarves of the Dark Mist Mountains (Kingdom of Nal-Khaldur) fell victim to this onslaught and were pushed out of their home. These dwarves ventured south, settling in the Northern Hills near the Iron Mountains and the Highlands -- which lay ever further south. These dwarves would soon develop a culture that was uniquely their own and eventually became the hill dwarves.   Dwarves as a whole haven't forgotten this slight against their people, and have declared war eternal on orcs and goblinoids alike. Dwarves have also developed a hostility against frost and hill giants as the two giant sub-races constantly threaten dwarven homelands. The Iron Mountain dwarves also carry disdain for the Picts as during the Great Catastrophe, the Picts all the sudden appeared and massacred their way through the Iron Mountains to the former dark elf kingdom of Galadhos to where they would make their eventual homeland.   As of now, the Caledonian Mountain dwarves continue to mine the resources around them and protect the human kingdoms of Caledonia and Berwick from the horrors of the Northern Wastes. The Iron Mountain dwarves fight alongside their hill dwarf kin and the knights of Rheged to stem the tide of marauding giants, orcs, and goblinoids, as well as the Picts. The Blue Mountain dwarves are by far the most wealthy due to them rarely ever being in any conflict with their surrounding neighbors, but they often do send warriors and other resources to their kin in an attempt to help and give aide.

The dwarves believe that they were created by their god Moradin. The dwarves believe that Moradin took the goddess Freya as his wife (even though the Skofnung and Rheged are stark opponents of this belief), and they created the first dwarves from the rocks and mountains: Dain and Vistra. They had three sons, Brottor, Bruenor, and Bairn. Moradin and Freya eventually revealed themselves to the three dwarven sons, and gave them the one time ability to create a mate from the stone and mountains. The three dwarf sons had obtained their wives, and from them the three great dwarf clans sprung, which are still in power to this day. 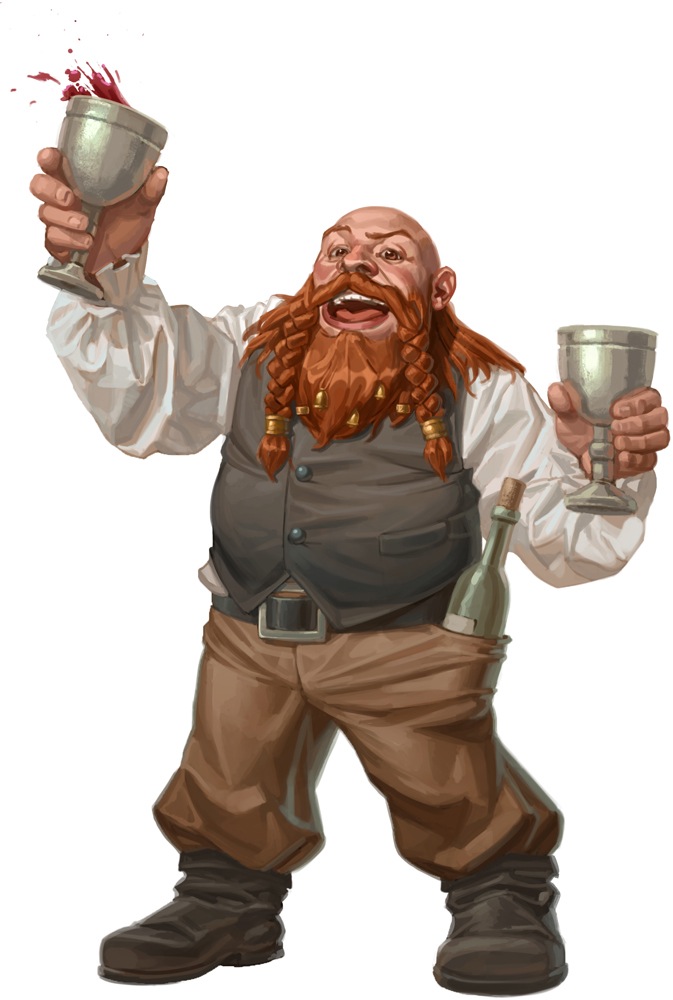