This wiki is currently undergoing some restructuring and redecorating. If you see anything out of place or notice anything difficult to read/access, then please let me know!


Industrial, magical, political; the dual-moon planet of Neyush is on the precipice of change.

People of many different species, reeling from the effects of the Great War almost two centuries ago, are accelerating into a new age, fueled by innovative discoveries and forgotten secrets. The event that ended the war and decimated an entire people is referred to as The Blink.

No-one knows how or why it happened, though many have theories.


The Blink also brought change to the Dozen.

Empty metaphysical Spheres of existence, or the homes of unknowable, ancient gods? Opportunities for life-enhancing magitech, or eldritch traps waiting to ensnare the curious? Aspects of reality as normal as time and gravity, or complex creations of the Drake herself?

Are the secrets behind the Dozen the key to saving it, or the catalyst for its doom?

Beyond our physical world are multiple Spheres of existence; The Drake is the over-arching Sphere, and there are twelve others. They obey vastly different laws to ours, and sometimes bleed into each other. If you've ever witnessed someone channelingmagic, then what you've actually seen happen is someone conscously drawing energy from one of these Spheres into our own.

Each Sphere has a conceptual area. There is some overlap between them, but generally you'll get similar effects by channeling from the same Sphere as someone else.

Flight isn't attainable for anyone except the kliasta, but if you can draw energy from the Nomad (and control it, which is the tricky bit), then you can float around to your heart's content.

What do we say?

If you can tap into the Pull at just the right time, you can draw your life energy from there instead of the Push (where all natural life comes from) and join the ranks of the undead Revenants.

There is still a lot of mystery around the Spheres. Were they created? If so, by whom? Did they always fit so neatly together, or have they been worked and shaped? How does channeling work, exactly? What are the downsides of transferring energy between different aspects of reality?

That said, many people over many years have made many efforts to understand as much as they can. Their findings and theories can be found below. Be sure to check back; this page will grow over time as more is learned about the Dozen.

The Drake is arguably the most powerful Sphere, and definitely the least-well understood.

Technically, anyone who Channels magic from any of the Spheres does so through the Drake; the connection between consciousness and the Drake is what allows the other Spheres to interact with the physical world.

It is unique in that it doesn't have an opposing Sphere, although some scholars have posited that the physical world itself opposes the Drake.

The are no Drake Conduits, and only the most dedicated (and luckiest) of Speakers manage to channel energy directly from the Drake. 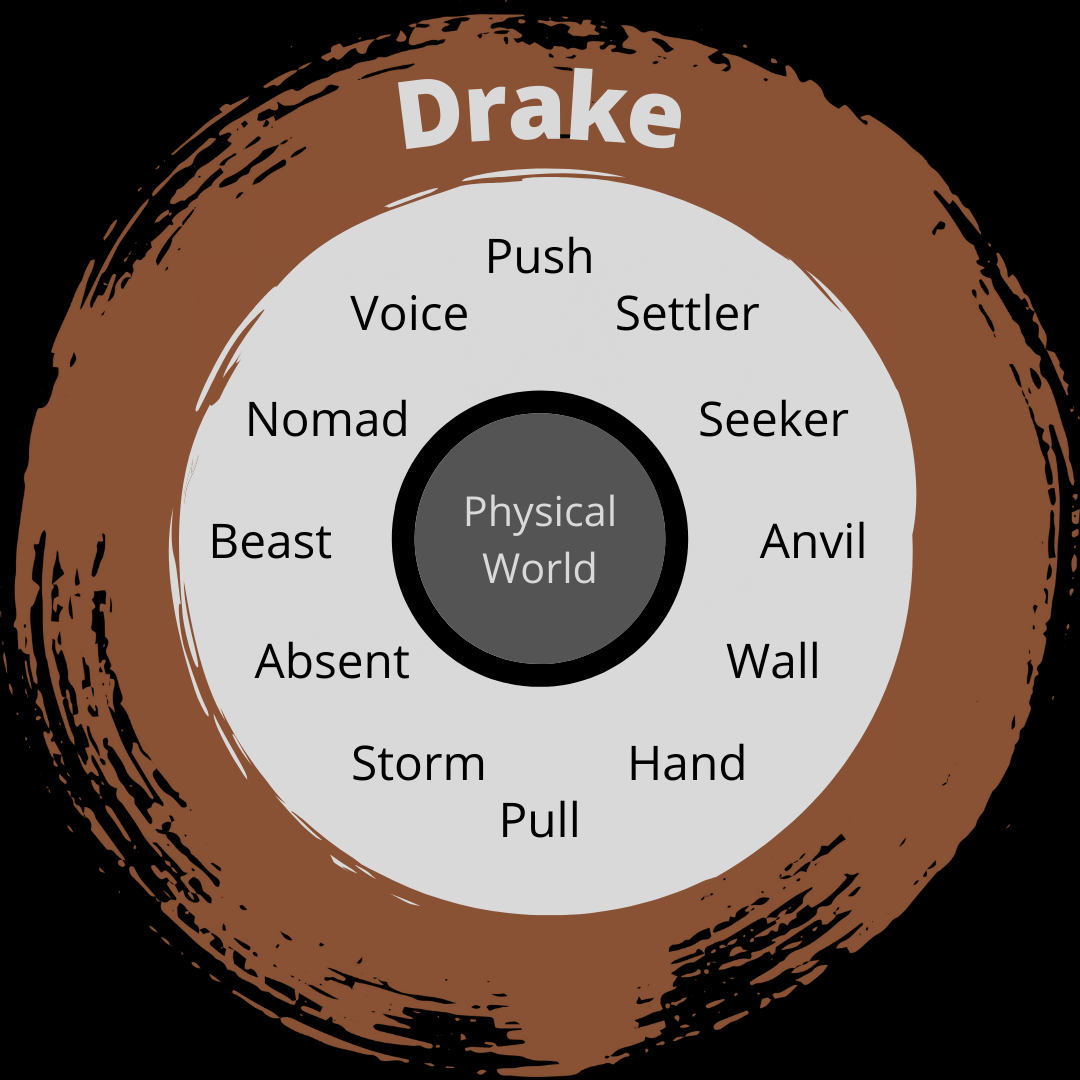 The Dozen
Open full size
A visual representation of the currently accepted conceptualisation of the Spheres.

A catch-all term for anyone who channels extraplanar energy

It's been suggested by some that energy from the Push is what first created life. Neither chaotic nor ordered, and strongly positive, its energy is lifeforce. Healing, farming, fertility; these are all governed and strengthened by links to the Push.

As with all Spheres, however, it's important to remember that the Push is not inherently 'good'. Uncontrolled and untempered growth and indulgence lead to selfishness, and energy from the Push fosters the spread of harmful biological matter as much as it does helpful.

Opposite to the Push is the Pull. This Sphere opposes life energy, and is represented by alchemical salt.

Aside from that, few people understand much about it at all. It has been hypothesised that the Pull may hold sway over the flow of time, but breakthroughs in that field, if any, have been kept largely secret.

The most well-known aspect of this Sphere is the Revenants, people who have survived long after they should (and, in most cases, have already) died. Recent figures like Tsainu and Captain Bloodscale are starting to redefine what it means to "live".

Articles under The Dozen

The various demiplanes from which magical energy can be channeled

All art by Pan unless otherwise stated.

FAQ: I didn't purposefully make a pantheon of 13 gods led by Drake so I could refer to them as a Draker's Dozen. Just one of life's happy accidental puns.

Could do a Dirty Dozen to off-set them, haha.

I really like that each sphere has its own properties and planes and stuff - I think I'm most intrigued by the Push, but that might be because of the little thing about revenants you wrote at the top. You've obviously put a lot of thought into the spheres and your magic system.

Thanks for the kind words! Yeah, some of them are definitely more fleshed out than others at the mo.