New Thebes spreads across the surface of the shallow Chrysean Sea like the white geometric web of a technologically advanced spider, radiating outward from the great spire of Jacob's Ladder that trails up until it meets the vanishing point. The Martian capital is truly a labyrinthine wonder of human engineering; the site of many interplanetary pioneering discoveries.
— Naomi Esperon, author of Rustfeet: A Brief History of Martian Habitation (2794 CE)

The settlement of New Thebes on Mars is a very densely-populated city tucked away in Da Vinci Crater, just off the coast of Xanthe Terra. New Thebes was the first extraterrestrial human colony, built when the crater was above water, but the city was modified as the sea level rose to produce a complex, multilayered web.

New Thebes is almost exclusively populated by humans, with small numbers of other sophont species comprising the rest. Prometheans are conspicuously absent, as the Martian atmosphere is poorly suited to their physiology.

We went from the Commander picking us, to us picking the Commander. It was an odd switch, but we didn't have to worry about it for too long before Daedalus had the bright idea of implementing a system of citywide referendums that made the Commander's job moot. So we call him the Commander, now.
— Ashwani Chatterjee, first human born on Mars (2178 CE)

New Thebes, as the first permanent extraterrestrial settlement, had a highly unusual governmental history as it transitioned from a loosely-followed standard space mission power structure (Commander > Lt. Commander > Officers) to an Athenian democracy as it gained more civilian inhabitants (as extraterrestrial societies have commonly done). This transition was assisted significantly by the habcity's AI, DAEDALUS, who coordinates the public votes on city policy. However, as the managing AI, DAEDALUS is allowed to nullify a collective vote if he perceives the outcome to be detrimental to the city and/or its inhabitants.

New Thebes is perhaps the most storied city on the once-red planet, in both the metaphorical and literal senses. Its evolution can be tracked in the design of each module; decades upon centuries of techoarchitectural fads radiating in rings from the Ladder and stacked upon each other from the seabed to the surface.
— Naomi Esperon, author of Rustfeet: A Brief History of Martian Habitation (2794 CE)

New Thebes started in the early 2100s as a modular fabricated-habitat network with large sections bored into the floor of the crater, with sections added on as the need arose. Over the centuries, the city has followed the modular-necessity trend, but the change in technological architecture is visible as pseudo-bands outward from the 22nd-century core. On the surface, buoyant buildings are connected by a web of long pathways that float on the water's surface and flex with the swell and chop. Below this, however, is a geometric tangle of habitat modules and corridors that descend hundreds of feet to the crater floor. Even further down, a network of tunnels and chambers bored out of the Martian crust extend for miles, linking outlying homesteads to the main city with dry, dim halls.

If you're lookin' to get off Mars for cheap, take the ferry to New Thebes. The city don't have a shuttleport no more; nah, they got the Ladder. Get a day trip up to orbit on that and you're a free 'phont.
— Lars Milhaus, Schiaparelli Crater irrigation technician (2329 CE)

New Thebes' primary power grid is supplied by massive floating solar plants and several wind turbine arrays along the coast of Xanthe Terra. However, Jacob's Ladder is not hooked into the main city grid; instead, the space elevator is powered by a set of hydrogen fusion reactors deep under the surface of the crater.

As of 2164, New Thebes became the site of an orbital elevator, called Jacob's Ladder, tethered to the IMORS in martiostationary orbit. Jacob's Ladder is the most efficient way to transfer goods between the surface and orbit, and as such, the city is a bit of a bottleneck for Martian offworld trade.

In the early days of the base, New Thebes had to be largely self-sufficient due to the two-year gaps between BIFROST deliveries. As the city grew, however, the cricket farms and hydroponic gardens could not feasibly sustain the gradually blooming population, and the underground sections were expanded to accommodate larger livestock. As the sea level rose, it became clear that seafood would be a much more dependable and economical source of sustenance, and so began the now-abundant kelp and fish farms visible from the city's lower levels.

After over half a century of no human activity on the Martian surface, the Cadmus V mission established New Thebes in Da Vinci Crater: humanity’s first permanent residence on a planet other than Earth.
— Naomi Esperon, author of Wandering the Sky: A Brief History of Human Interstellar Exploration (2815 CE)

New Thebes was initially established in 2100 as a permanent research station to monitor the progress of the Martian terraforming program, Cadmus, and started with a contingent of just 10 semi-permanent human occupants. Each 10-member contingent lived in New Thebes for roughly 200 days before the shifts were switched, but by 2125 the shifts were extended to 400 days and the occupancy was doubled as well. By the time the first extrasolar colony was established on Fortuna in the Alpha Centauri system in 2138, New Thebes had over a hundred inhabitants, at least half of whom were permanent residents of the Red Planet. After another half century’s worth of terraforming, the surface conditions of Mars were somewhat amenable to unprotected humans, and New Thebes was practically a small town. 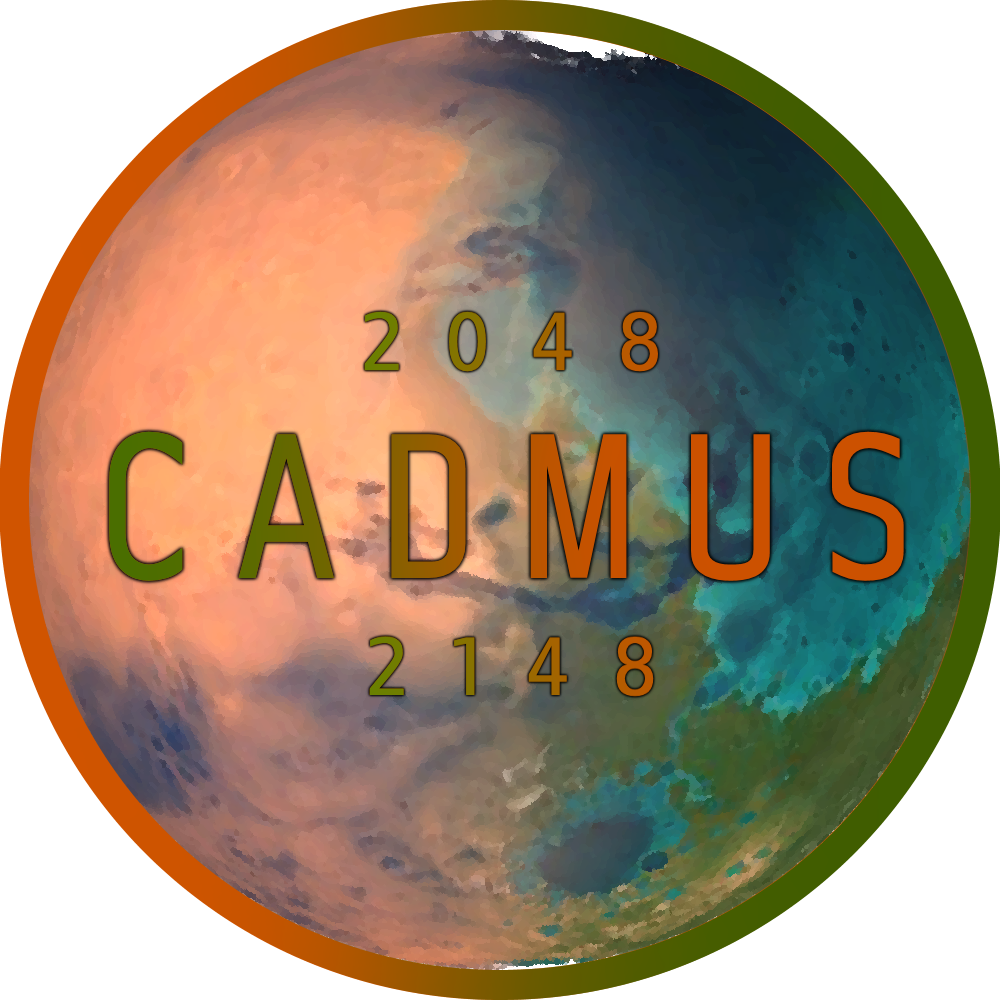 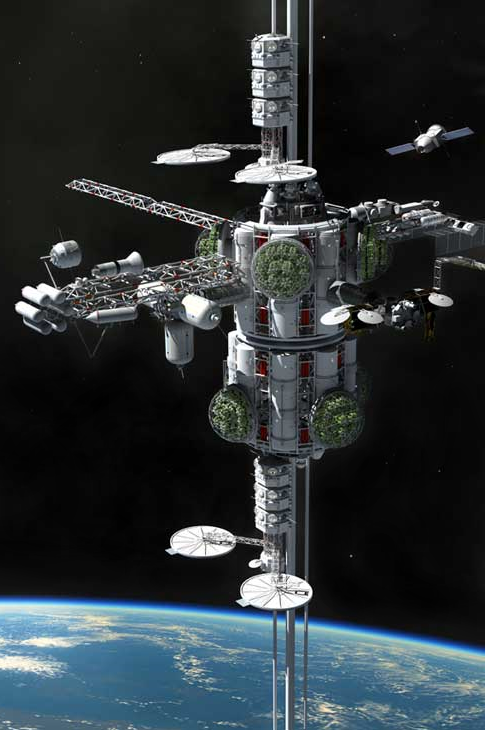 The Diaspora universe and all related works © 2018-2019 Douglas Marshall ("SpyglassRealms"), all rights reserved.   Art assets not created by SpyglassRealms are either public domain content, Creative Commons Attribution, or displayed with the permission of the creator(s).
Cover image: by Unknown (unlocatable)

Hmmm. Sophont huh? I've heard that term before. Haha.   Seriously though, this was a great entry into the competition! You wrote up this colony with a well-thought informative mindset You explain the architecture and the unique challenges, as well the history and functionality.   One thing I am curious though which I thought was missing was what the colony provides besides a place for population? Is there any unique that New Thebes provides? Resources that can only be found on Mars? Or is population such a problem that just having that is a benefit on itself?

I’m so glad you liked it!! The primary function of New Thebes in the modern day is as a trade hub, specifically between the surface and orbit, thanks to the space elevator. In this way it’s essentially like a port city: it grew mostly thanks to the goods that pass through it. I should probably mention that its economy is embellished by both the agriculture explained in the article and a few commercial fishing operations. If you’re asking why the colony was founded, however, that’s an entirely different answer. Humans simply wanted to figure out how to live on Mars, so we could shift some of our more intrepid population from Earth to Mars to allow our efforts in repairing the damage to our planet to succeed. And succeed they did; modern Earth has struck a balance between ecology and society! (Only took a couple hundred years, lol)