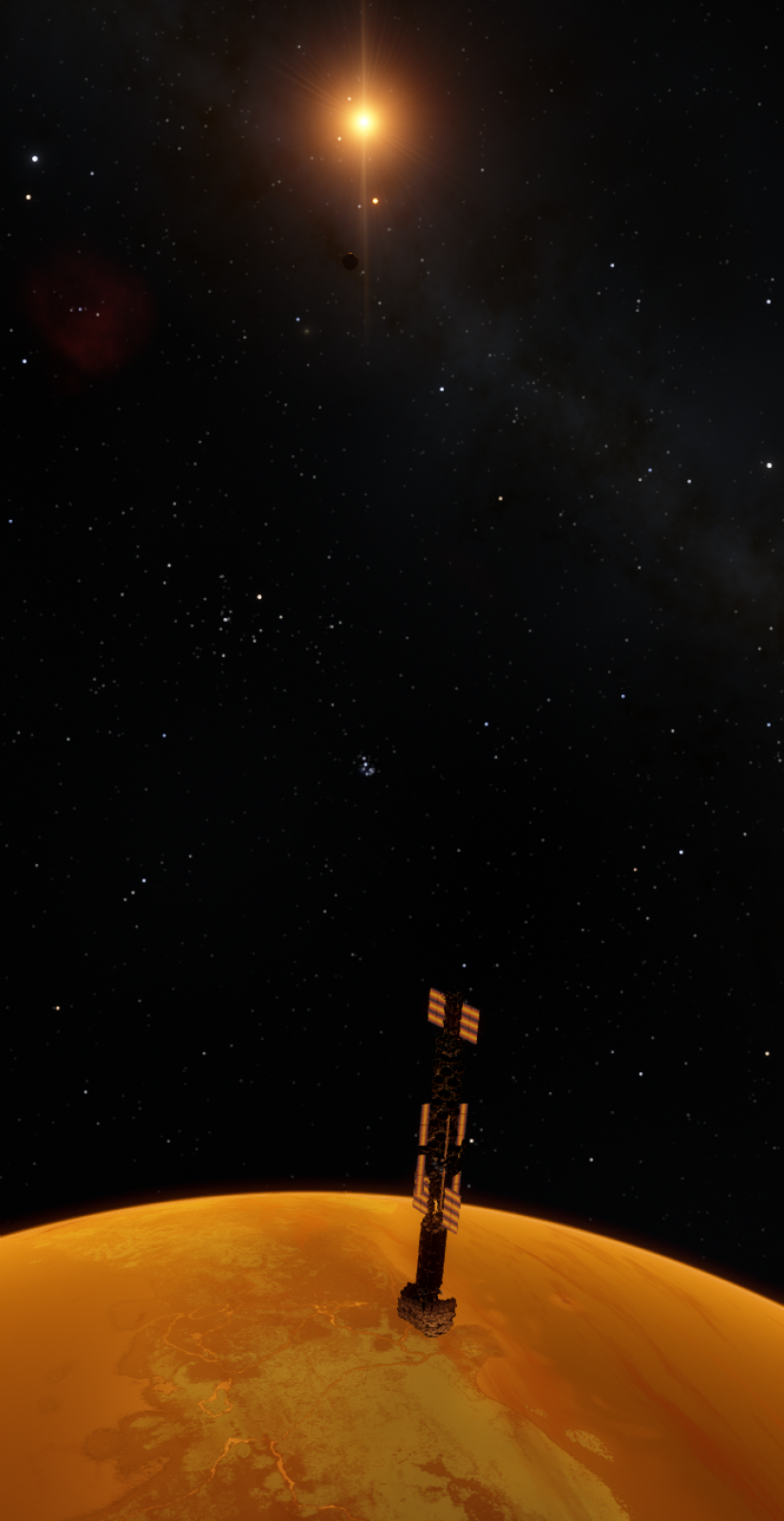 The Arete mission was a 24-year expedition to the planet Prometheus in the Proxima Centauri system, and the first crewed interstellar voyage humanity undertook. Six humans from Earth aboard the UNSS Skyward Spirit dedicated two and a half decades of their lives to the study of an alien world, and their courage and dedication paid off in unimaginable ways.

After several years of poring over the Copernicus data, the United Nations Aerospace Coalition drafted the outline for a manned mission to Prometheus and commissioned all spacefaring countries to contribute what they could to the endeavor. The mission, dubbed Arete for the Greek spirit of virtue and knowledge, was planned in stages (see sidebar.) 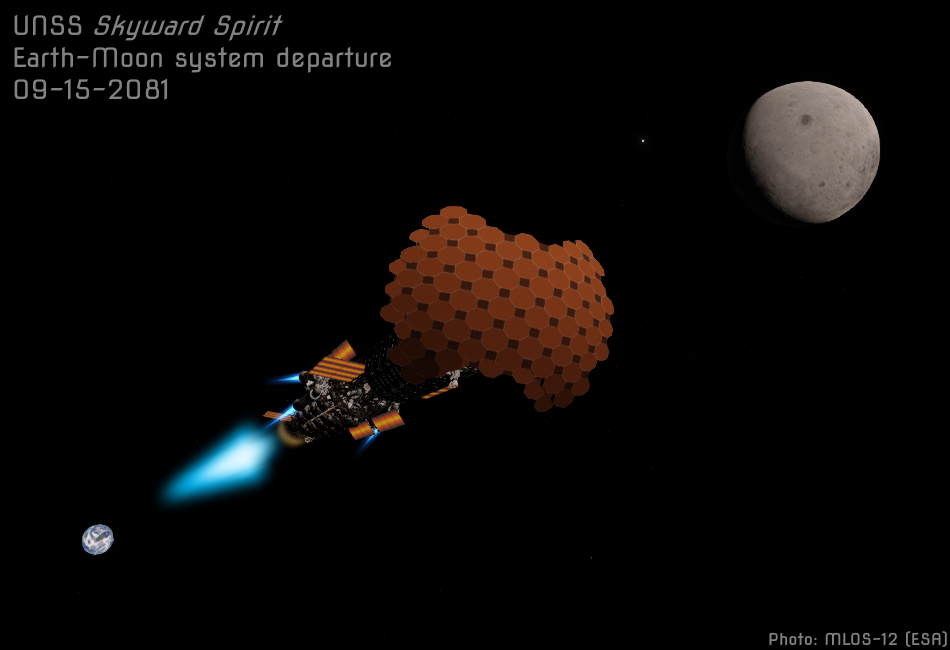 Soon after the mission outline was drafted, the UNAC developed rough plans for the United Nations Star Ship Skyward Spirit: the first crew-capable interstellar spacecraft made and operated by the human species. The components of the Skyward Spirit were designed and manufactured on the surface of Earth, and subsequently transported to the Deep Space Gateway to be assembled.

Equipped with a high-efficiency D-H3 fusion spike engine specifically designed for its mission, the Skyward received its full crew complement of six over the course of the year 2078 and left the Earth-Moon system in 2081 after two years of rigorous testing and training. 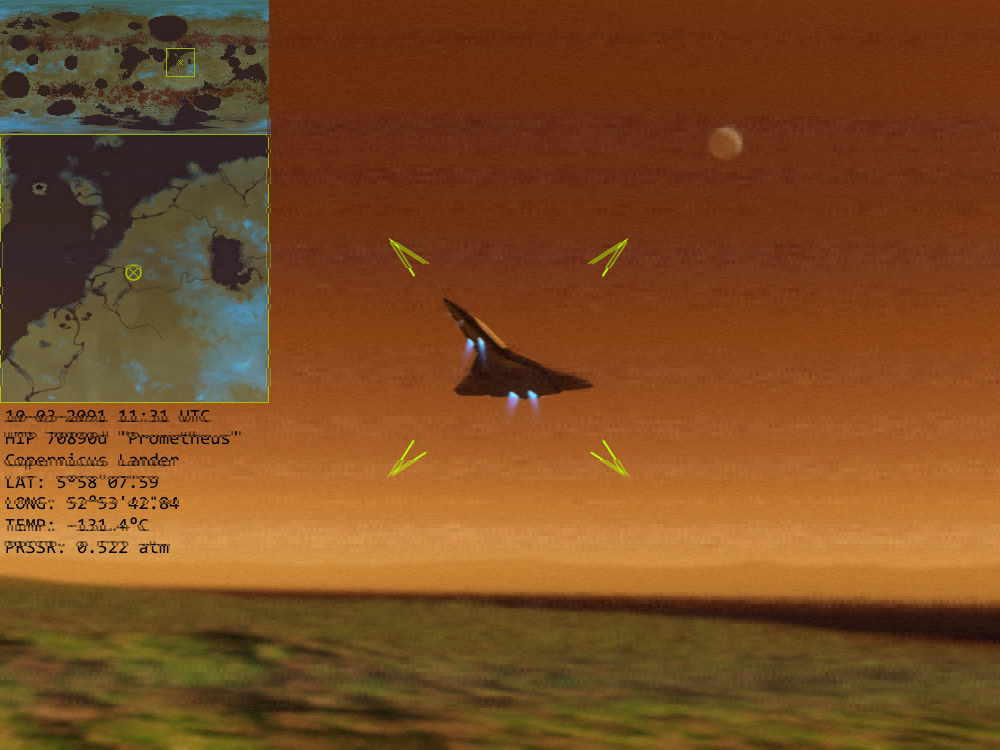 by UNAC (Copernicus) / Doug Marshall
The craft achieved its maximum velocity of 0.5c as it exited the Sol system, and reached the Proxima system approximately nine years later in 2090. While in transit, the crew was placed in and out of cryostasis in paired shifts, to ensure that there was a minimum of two humans conscious at any time aboard the vessel should any issues arise that the automated systems were unable to resolve independently. Fortunately, the voyage encountered no such catastrophes. Upon completion of the initial deceleration burn, the rest of the crew was revived to begin preparation for arrival. The Skyward completed deceleration and entered stable orbit around Prometheus in October of 2090. The vessel completed five orbits while communicating with the Copernicus probe before discharging the surface base modules for descent. All six autonomously-piloted surface modules achieved safe landing in a shallow depression on Planum Hecateris and deployed solar generators without error. After a full year in orbit around Prometheus, the first landing party was dispatched, consisting of Calder, Kasiobi, and Castañeda. The shuttle Deucalion touched down on Planum Hecateris near Mare Ballard on October 3, 2091 -exactly 75 years after the first human landing on Mars- bearing the first humans to ever set foot on Prometheus or any other extrasolar planet.

Surface operations proceeded as expected for the first several months, with little to no incident. The crew occupied the surface and the orbiting spacecraft continuously in triplicate shifts; every six months, the previous surface party of three would return to the Skyward aboard the shuttle Deucalion, which would then return to the surface with the next group who would occupy the habitat camp for the next half-year. The first surface group discovered large concentrations of bioluminescent chemosynths, and after tests were run on samples of the "glowplaque," it was determined that the Promethean biosphere had a chemical basis rooted equally in carbon and silicon. However, the autotrophs and nonsapient macrofauna were not the only organisms endemic to the region. Roughly two years into the landing mission, the habitat camp was approached by a group of beings which, as evidenced by their clothing and rather primitive tools, were clearly sophonts. Now painfully aware of how much of an oversight it had been for the UNAC to have neglected to include a xenolinguist on the Skyward, the Arete crew spent several months constructing a basis on which to make Promethean speech intelligible to humans. Once complete, it was put to effective use, making Dr. Anwuli Kasiobi the first human to communicate intelligibly to extraterrestrials.

The native Prometheans expressed their concern as to the intentions of the mission crew, whom they referred to as “Sky Beings”, and marveled at the comparatively magical technology used by humans. Amused, the crew reassured the natives that they came in peace and asked to be shown the local civilization. Thus began an unprecedented cultural exchange that caused extreme waves in Earthly society when the mission reports returned home almost four and a half years later. At the time of first contact, Promethean society was at a technological level analogous to the human medieval period; through the guidance of the Arete crew, they understood even the secrets of spaceflight by mission’s end. An agreement of interstellar cohabitance was reached in lieu of proper political machinations on the part of humans: the Proxima Accords.

In 2096, the final surface group returned to their mothership for the last time, leaving the habitat camp on the surface for the Prometheans to reverse-engineer in the hopes that Promethean technology would improve considerably until the next interaction between the two species. After its initial escape velocity burn, the UNSS Skyward Spirit left Promethean orbit and began its nine-year voyage home, returning just after the dawn of the new century. The crew, quarantined for some time before being released to Earth, described their time spent on Prometheus as “incomparably exhilarating.” Indeed, the success of the Arete mission encouraged humanity to personally explore a great many more worlds. 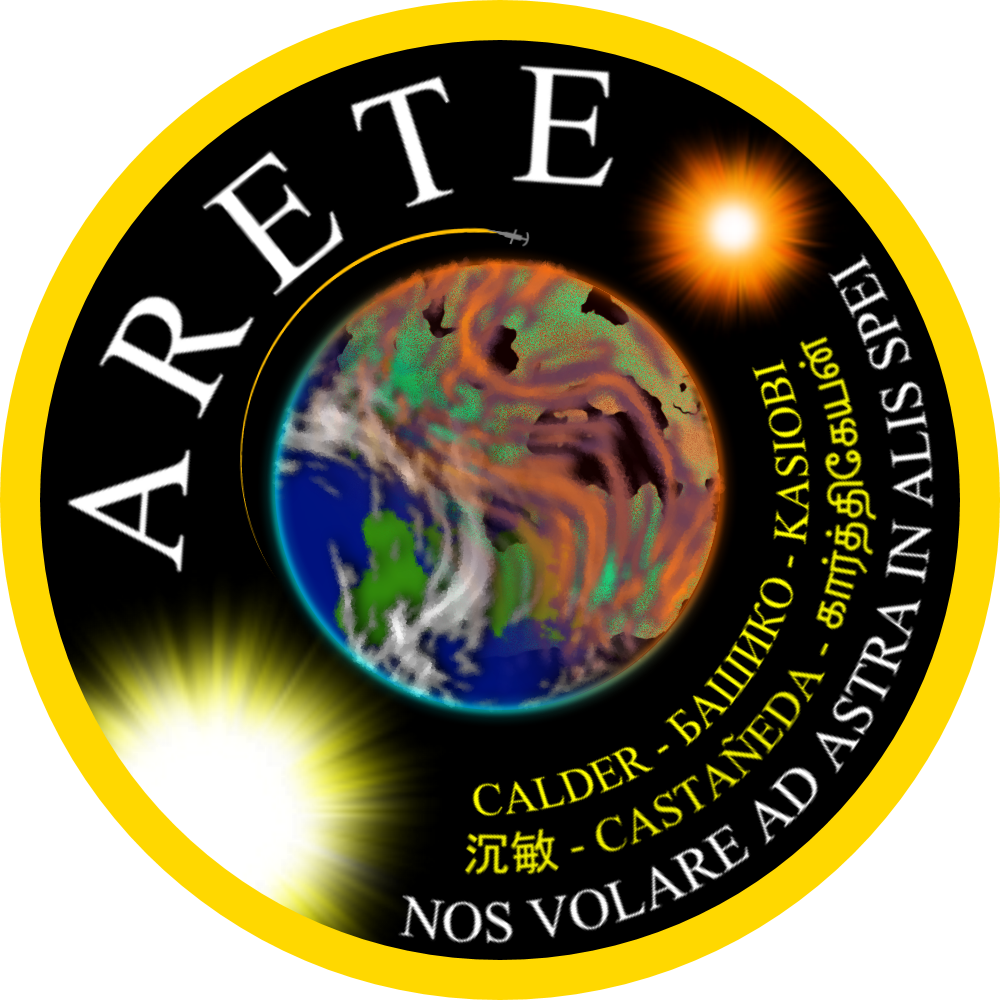 Calder to Earth; hope you’re getting this, Earth. We’re here, and it’s breathtaking. The ground lit up when I stepped on it, like it’s glad to have me. If it could understand me, I’d let it know that the feeling is mutual.
— Cmdr. Tegan Calder

Commander Calder's day-by-day record of the Arete I mission to Proxima Centauri.

Commander Calder's day-by-day record of the Arete I mission to Proxima Centauri.