Ignoring the fact that it is a pirate and criminal nest, it is a pretty great place to live or sell your goods. There might be bad people, but the city security is very good. And they punish crimes harshly so I don't think its a bad place to be. And the goods sold there? They are exotic AND cheap, what more you need to move there?
— ??

Blackdenn is one of the main cities in the Misty Islands, located in the Thessagus island. It is a well known pirate city, but it is a safe city, one of the safest cities in Drucor.

Located in the Thessagus island in the Misty Islands, it is mostly a merchant city and a stopping point for long sea travels. It is also know for being a refuge, a place where people that had to run away can come and live, and a pirate nest. The city, even if its a refuge exiled people and pirates, its a safe place, where almost never one would see a crime. People came here running away from conflicts so they punish crimes with very high prices.

Surface side of the city. It is always busy, and many houses also function as shops. Visitors (unless they are know in town) usually only see this part of the town, even if they ask to see the undercity. They are being watched during all their visit, and if they cause problems, they are kick out of the city.

Owned by Melina Mecer, its one of the busiest buildings in the over-city and the tallest. Being the main place where visitors stay, it is busy during the morning and evening, and it is calm during night. Most inhabitants stick to the undercity's inns.

Controlled by Angrin Cachin, you can always find movement of people, be it day or night. Visitor ships are always docking and leaving. Resident's ships know that they have to dock in the harbour outside the city.

A busy market place that is open from morning to late evening. Many of the things sold here are exotic, but not illegal. Visitors can put a stand for their goods, with a tiny fee. The market grows and shrink depending on the quantity of merchant visitors.

Managed by Gailse, this building holds shrines to many gods of different religions. A nice space where one will almost never see a resident worship, only visitors, as the residents use the temples of the undercity. It is open all day and night, but Gailse can be found only during day.

Used to be a fortress, Allira Dorsys made the building open to public with a few restricted areas. It has the city's library and residents (and visitants) can come in and talk with the mayor or any of her assistants. The building becomes closed to public during night.

Where most of the guards sleep, and store their armours and weapons. It is private to public and thus it usually has a couple of soldiers guarding the entrance. Krovabuch, the capitan of the guard, is usually in here during most of the day.

At a first glance, it is a happy home for a interracial couple (a human and a half-orc) of peasants. The couple are soldiers in disguise, guarding the main entrance to the undercity. While being an entrance to the undercity, the couple live here and do normal life. They let visitor pass in the undercity if they come in with a resident. While they can recognize many residents, they ask for a password.
Type
City
Inhabitant Demonym
Blackens
Location under
Thessagus
Owning Organization
Drucor
Ruler
Allira Dorsys

There are stories about hidden treasures on the undercity's cave walls, from when pirates used the cave to hide their treasures. Treasures that the old pirates hid on the walls and never managed to recover for whatever reason. These stories are backed as sometimes people have found treasures while carving stairs into the walls.

The undercity is divided in layers. The constructers used the natural formed terraces in the walls of the cave to be able to construct more buildings. Many houses were constructed in the cave's walls for even more space. To reach different layers of the city, there are stairs carved in the walls. There are 5 layers in the city, all differentiated by the heigh they are located. The layers are marked by the colour of the roof: red district, green district, blue district, yellow district and purple district.
The layers where a resident lives shows off their riches, the higher they live, the more money they have.

The undercity is hidden from visitors, only allowing to enter the regular visitors. The reason about why the undercity is so protected is unknown, but the residents have grown to like it to be this way.

There are some illegals goods that are allowed such as drugs, ingredients, weapons and exotic animals. While these are allowed, there are other illegal goods that are not allowed to sell: stolen goods and slaves or other goods that do not inflict with intelligent species' rights. 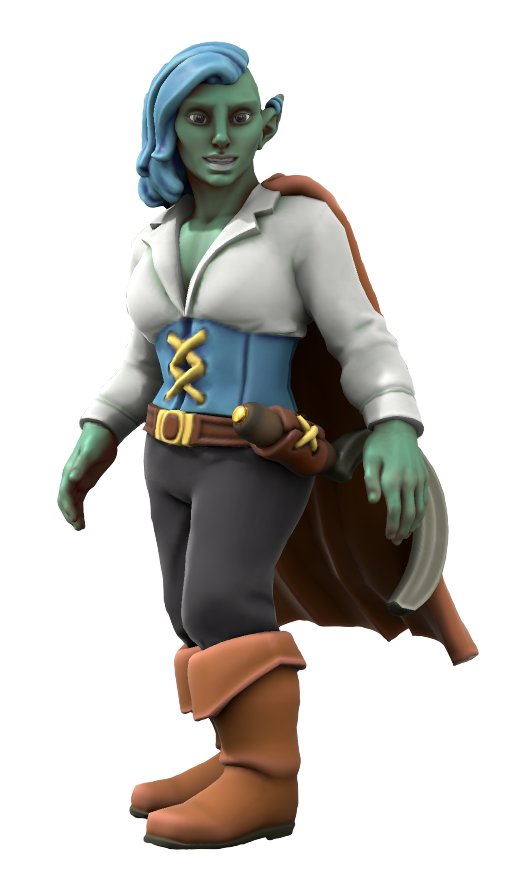 Allira Dorsys is a water genesis that used to be a pirate before starting ruling this city. She comes from a long pirate family and is both respected and feared as she sometimes acts as a wildcard when there are grave problems. 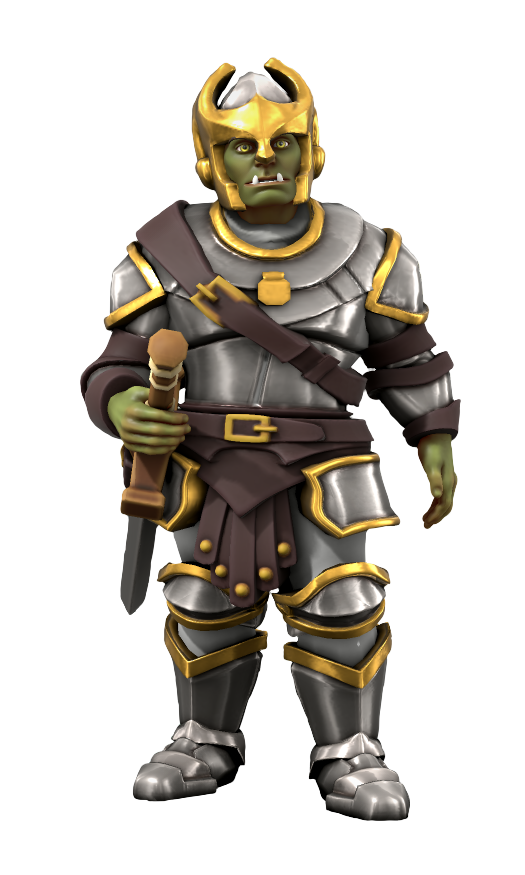 Korvabuch is a half-orc and the capitan guard of Blackdenn. He controls the city with an iron hand, he is usually found patrolling the over-city or in the barracks, leaving the control of the undercity to Quon. 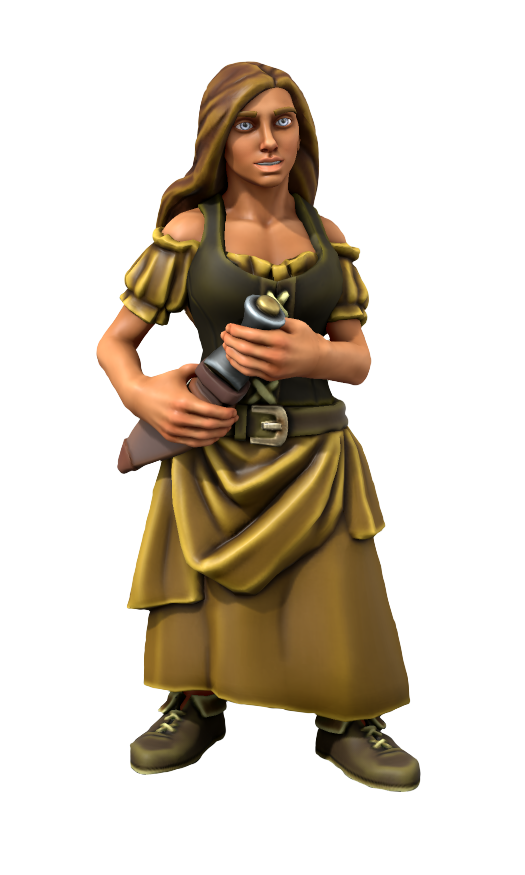 Fanni Kaila is a human guard that guards the entrance of the undercity, located in her house, with the help of his husband Creth Kaila. While she is wearing peasant clothes as part of her job, she always has her dagger.

Creth Kaila is a half-orc guard that, together with his wife Fanni Faila, guards the undercity entrance. While most of the time guards the entrance, he also replaces guards that for any reason cannot do their job. 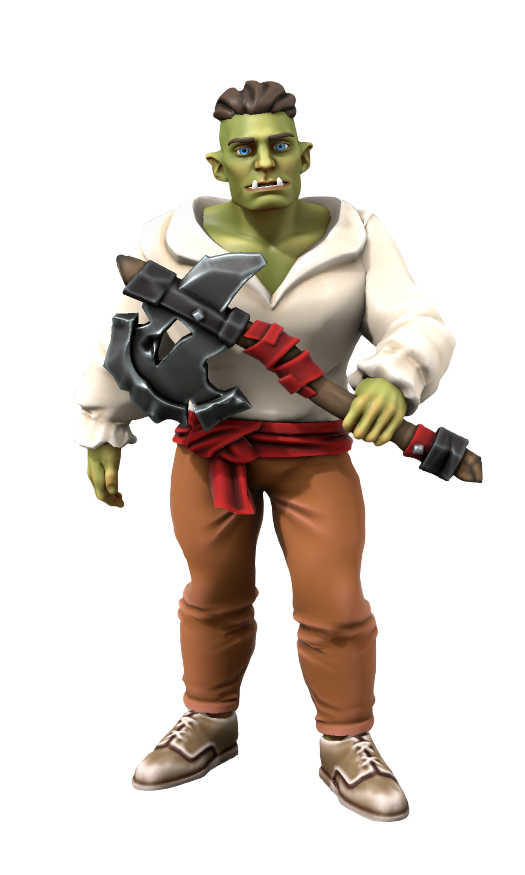 Melina Mecer is a halfling who owns the over-city inn. Her family have been in this city for many generations. She lost her left arm a while ago while helping Quon save the dragon from when Gailse tried to kidnap. 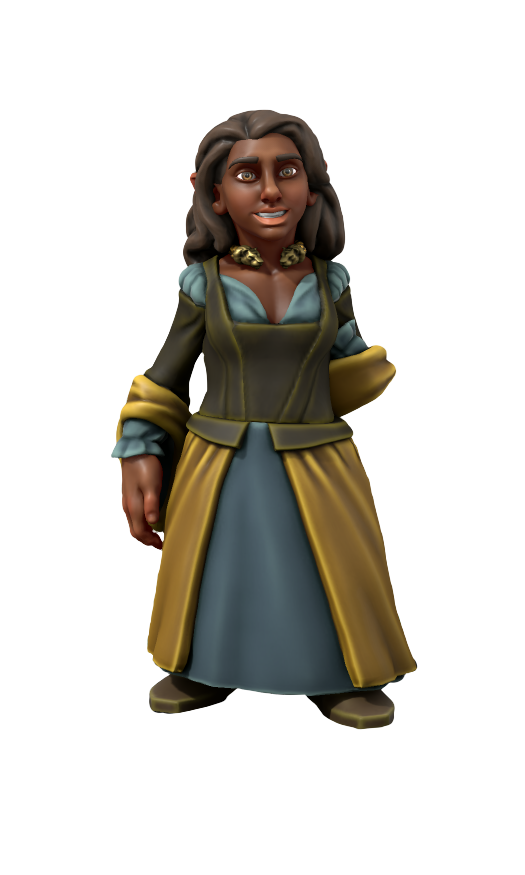 Assath is a kenku waiter in the over-city inn. Little is know about Assath other than he is young and one day he appeared in the city. Since then, he is working in the over-city and sometimes helping in the inns of the undercity. 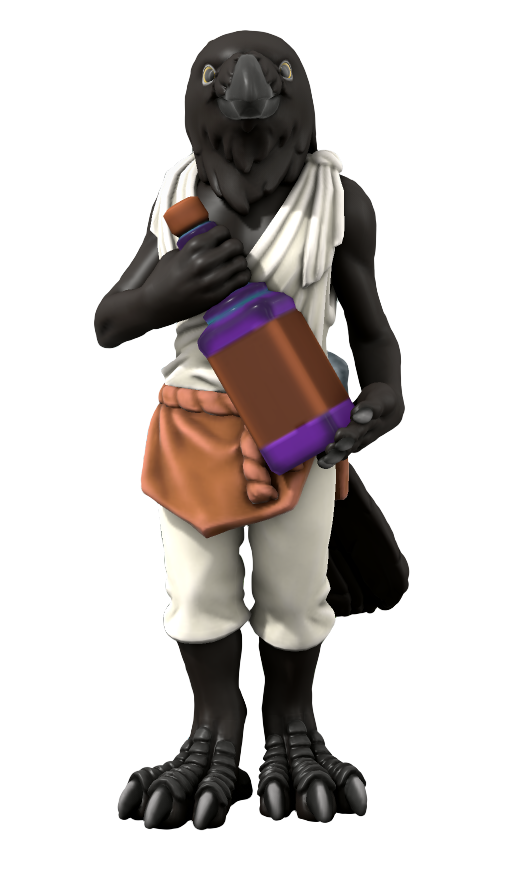 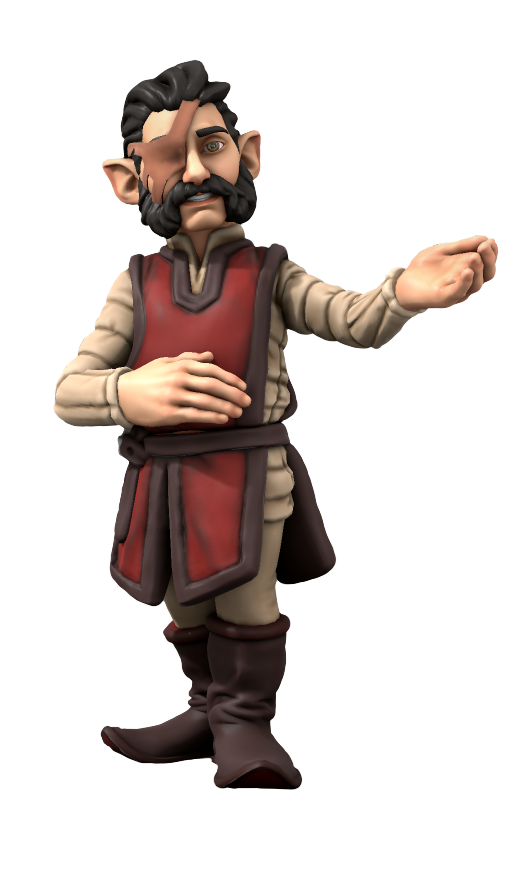 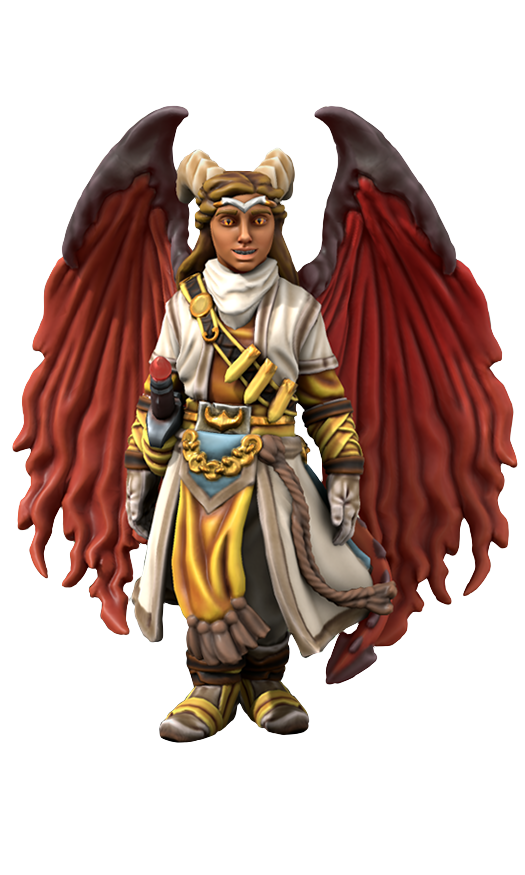 Gailse is a dragon and the priest of the temple of the city. She was been giving this job as with all her travels she came across many religion and thus was the most adequate person in town to follow the last priest steps. 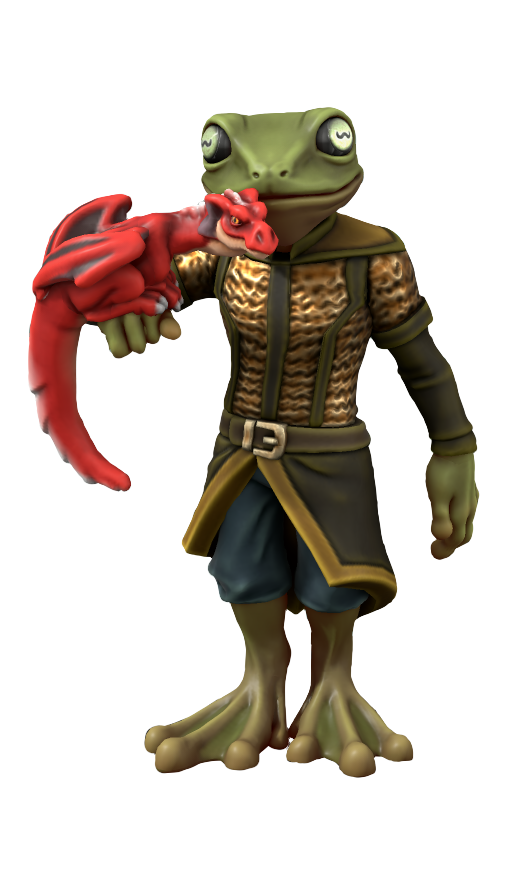 Quon is a grippli that was left here as a kid. He has been grown and trained by Korvabuch and now is his second in command. He found a dragon egg and now has a small dragon that brings when patrolling the undercity.

Starting as a pirate's camp, it grew slowly when various pirates groups merged when there was the Danter's war to increase their possibilities to survive. After starting the bases of a town, the pirates found the nearby cave that is located under their new town, and used it to hide their treasures. For years, the town slowly grow, not only with pirates but also with exiled people.
When the Danter's war ended, the pirates left behind their criminal ways to became sailors and the city grew even more, starting to accept people without criminal past. They took seriously the security of the town, punishing harshly thieves and killers. The city started to be know as one of the free secure cities.

A year ago, Quon found a dragon egg and took care of it until it hatch. Quon and Melina Mecer took care of it. Somedays later, Gailse heard about that dragon, she tried to take care of it, as she is a dragon and unlike the other two, she knows how to deal with dragons. The conversation did not end well and Gailse could not keep the dragon and Melina Mecer lose an arm.
For decades, the city grew and became a common stopping point for long travels in the Minneville ocean. The city started expanding in the cave, carving houses in walls and filling the floor space with houses, slowly living the surface for tourists. One year, the major decided that in the town, it would be legal to sell illegal goods if they were not stolen and do not break any intelligent species' rights. The illegal goods were only allowed to be sold in the undercity, to visitors that had visited enough times to be allowed to enter the undercity.
Location

All art of the NPC is from Hero Forge, done by Catoblepon.

Thank you! Glad you liked it! :D

Everyone loves a pirate settlement! As we say in Italy "Campagna pirata, figata assicurata" that roughly translates "Pirate campaign, certainly cool!" but in Italian rhimes.

Pirate town, pirate town! <3 I love the map work on this, particularly your use of layers. Sounds like a really interesting place to visit. I love all the npcs too. :D