Frogfish are small, long legged mammals that live on Hell.

Frogfish have a bipedal stature, with long arms and incredibly long legs, and a small body. Their heads are small, with small eyes and thin layers of armour plates on their crown. This armour extends along their backs and down their long tails. Their arms and legs end in three fingers/toes, their hands possessing partially opposable thumbs. They have a reddish appearance, with their legs maintaining a purplish colour while their armour scales are a lighter orange.

A clear difference between males and females, male frogfish are roughly 30% smaller with darker purple legs. Females are the dominant of the two, and easily overpower males. Females have longer tails too, usually a few inches longer.

The rosy-cheeked frogfish is a subspecies of frogfish, with rosy cheeks. A slight pink tinge on the face is all that separates other frogfish from this subspecies, yet this subspecies is much more valuable on the pet trade. 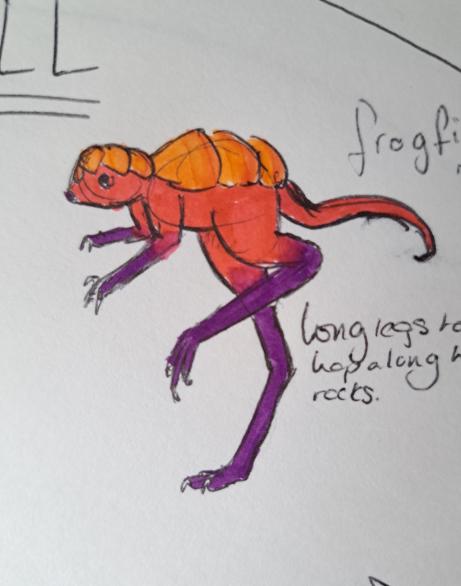 Frogfish use their speed to their advantage, spending their days chasing tiny insects like horned fireflies. They have to catch hundreds of insects a day to keep themselves from starving to death, considering they lose a lot of weight from constantly running about to escape predators.

Frogfish live in forest environments around the equator of Hell. They hide in tall red grasses away from predators, running up to 30kph. They are adapted with pads on their feet which protect them from the warm soil and burning rocks.

In order to please females, male frogfish will use their strong legs to dig out holes in the ground, where they can nest. The pair of frogfish will travel closer to the north or south pole, where the ground is colder and it is safer for them to nest. Once they have arrived at their chosen destination, the males will dig out the burrow while females will watch out for predators, alerting the male with a high pitched squeak if one gets too close.
Once the burrow is dug out, the males will find vegetation to cover the entrance and hide it from predators. The female will enter, the male following behind, and they will mate in private. The female is then left alone in the burrow to give birth to their young, and to raise them. Males will make frequent appearances with food, for the females and their young.

To those not living on Hell, frogfish are seen as popular pets. These tiny creatures are very easy to look after, only requiring insects to eat and rarely ever needing any kind of liquid, as well as the occasional dust-bath. The rarer subspecies, like rosy-cheeked frogfish are most popular, and they can be rather expensive.

Trans-Planetary Corporations are common on Hell, harvesting the abundant minerals in the ground. To the people working on the planet, frogfish are seen as pests, as they often break into buildings and carry many diseases. The diseases on Hell are particularly vicious towards foreigners, so they pose a great threat to those not from the planet that work there.
Mammals 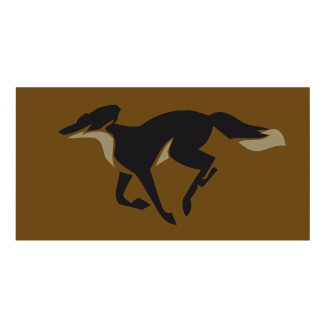