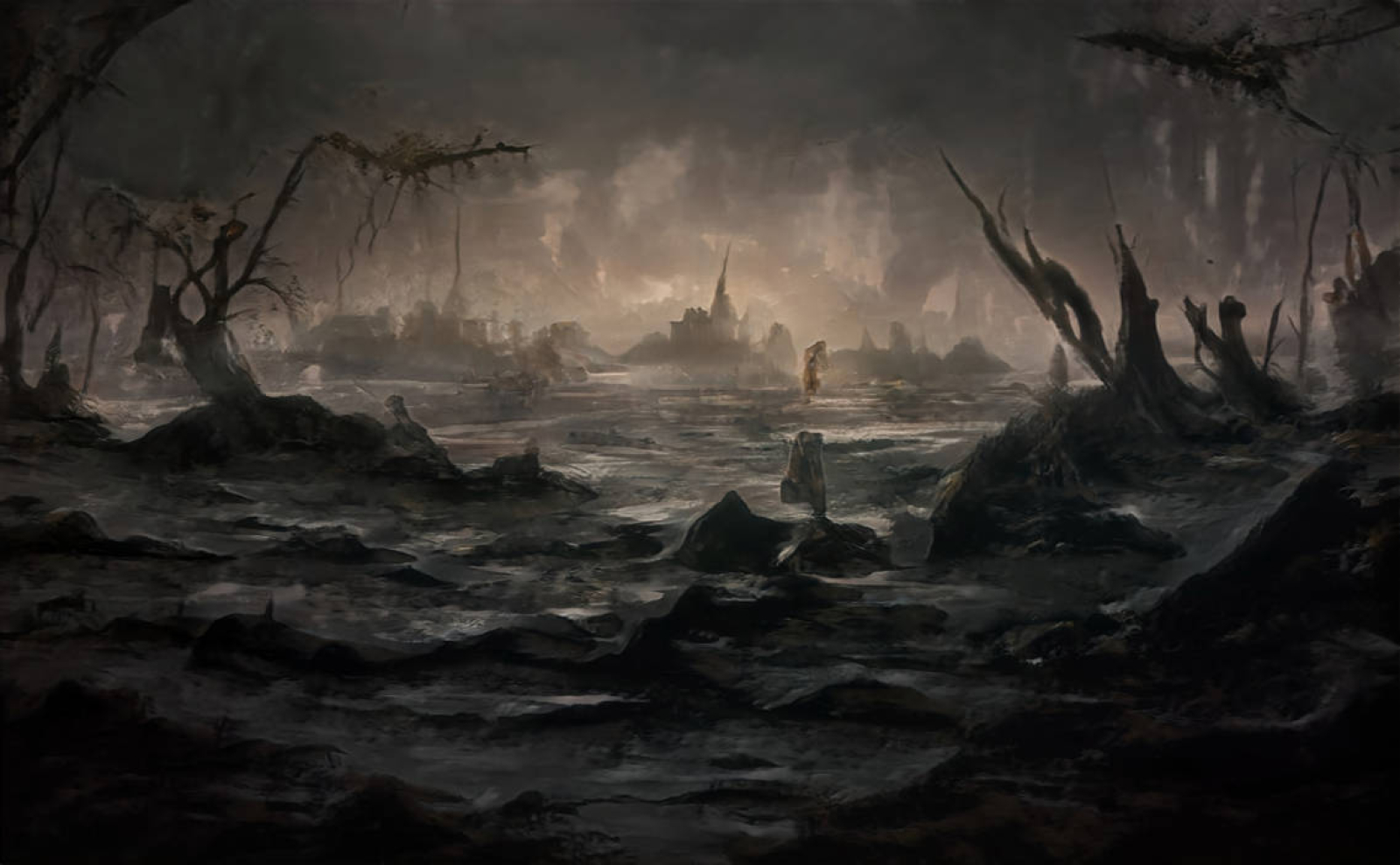 The Plane of Shadow is a dark reflection of the Mortal World; a plane of despair and darkness that holds no visible sun nor stars in the sky. It is a world of darkness and decay where color, sound, taste, and perception is lessened and necrotic energy and shadow magic rule. It shares similar features to the Mortal Plane, but twisted and distorted, and has strong ties to necrotic energy and undeath.

Necromancy and, to a greater extent, Shadow magic are enhanced while within the Shadowlands. (While within the Withering, Necromancy spells are cast as if at a 1 level higher than the spell slot used. A creature with a connection or specialization in "Shadow" magic - such as Shadow Sorcerer - can also cast Illusion and Conjuration spells as if they were 1 level higher.)

Living in the Withering

Anything that produces light dims and darkens in the shadowlands as the very realm rejects the illumination. The longer one exists within the Withering, the more one seems to lose their ability to feel positive emotion, succumbing to apathy or dread. As time goes on they may begin to lose their color as well. While plants grow, they are in a constant state of decay as they grow making most plants inedible. For this reason, beings within the Shadow are either carnivorous, cannibalistic, scavengers, or require no food.

A unique form of matter, deemed "shadowstuff," exists in the Withering, formed from darkness and thriving within the constant dim and dark illumination of the plane. The strange material reacts to certain kinds of magic and little else, dissipating or pulling away at most physical interaction.

While devoid of most of what the Mortal Plane would consider "life," there are plants that grow and creatures that live there outside of the undead. Dark creatures find their way to the Withering to make their homes. The nilalain, fetchlings, and other peoples who inhabit the darkness of the Withering have mostly lived so long in the shadowy plane that their body and soul has been altered by it. These are in addition to the Withering's unique breed of creatures such as shadow dragons, nightshades, undead - both small and great - and twisted versions of animals and other creatures that exist within the Material.
The most known type of creatures existing within the Shadow Plane are the undead. Undead of the Withering are corpses infused with shadow that wander the ruined lands of the plane in groups and alone.

In addition to those twisted by the magic of the Withering or animated by it, the plane of shadows finds itself to be the home of a number of aberrations that seem to thrive in the lifeless space. Perhaps they find it most similar to their home within the Void or perhaps the shadow energies embolden them, but regardless of the reason, they flock to it.

Sometimes confused with the native ancestry, the Nilalin, the shadow fae are twisted forms of their Faerie kin, devoid of the life and light that used to make them fae. Faerie tales speak of a bloodline of fae that was cursed by Titania millennia ago and banished from Faerie into darkness, never to stand in the light again. These shadowy fae are cruel, capricious, and heartless - even compared to their Winter kin - with a deep disdain for all other fae. They have formed their own twisted court within the Shadow where they plot their revenge against the Faerie courts, especially Summer.

The Nil are born in the shadowed lands of the Withering, as such they retain a suppressed empathy and a closer connection with death, yet claim some resistance to its pull. They come in various shapes and forms, but judging from the majority, the original Nil were humans or human-like humanoids. Though they have inhabited the black sands of the Withering for as long as they remember, the oldest stories they tell elude to them not originating from the Withering. With a large number residing in their capital of Ombos, it is believed that the first Nil could have been changed when they transported to the plane of shadows before the fall of the Black Empire.

Several theories are floated about the plane's origins. The earliest prevalent accounts of the existence of the Withering began between the formation and the height of the Great Eldar Princedoms, the former empires of the elves of Eldaria, when House Lomefaire became the first mortals to knowingly harness the power of shadow magic from the Withering, causing fundamental changes to their forms and becoming the first of the Shadow Elves, a subspecies of elf more commonly referred to as Drow - though not all shadow elves are drow. Prior to this, no written histories made any solid evidence to its existence, causing some to speculate that it was formed spontaneously, though if so it would be the only major plane to do this. Others speculate that the Withering is remnants of a plane that succumbed to some apocalyptic catastrophe or that it is a failed copy of the Mortal World, but none of these theories have been substantially proven. Some believe it was spontaneously created within the Veil, others believe it was the creation of some dark god of death that wanted to reign over their own version of the Material, and others say it was created after the Outer Gate was formed as energies from the Void made their way into the Prime and through happenstance or divine intervention created the decaying echo of the Material with a connection to that could not be severed.

One of the most well known locations in the Withering is the city of Dreadharrow, an ancient Eldar city that existed millennia ago in Eldaria and now exists both within the Shadow Plane and the Mortal World, shifting between the planes intermittently. The original name of the city has been forgotten by all but a few, and those who would remember it do not speak it. The people of the Eldaran Ascendency do not allow visitors to the Dread Isle on which it sits, broken from the continent of Tol'Galen long ago to prevent the spread of the siphoning magic of the Withering that had spread across the lands around it and used to drain the land of its life.

City of the Nilalain, an ancestry native to the Plane of Shadows. Ombos is the shadowy reflection, and heretical opposite of the holy city of Iunu in Khalimar on the continent of Lithria. It sits among the blackened, ash-sands of the Shadowlands and is home to a great many Nilalin. It's most prominent structure - as with its Material counterpart - is an enormous temple devoted to the worship of the patron goddess of the Nilalin, Corva.

The Withering has connections to a handful of known demiplanes. Some travel through it like a dark mist, swallowing anything they can find, others are anchored to specific locations. The most notable of these demiplanes is the Realm of Dread, the home of a fabled vampire lord that travels around in the form of a dense fog and sometimes finds its way onto the Mortal Plane briefly.

Shadow of the Maelstrom Sea

The shadow of the Maelstrom Sea between Harental, Tol'Galen, and Lithria does not swirl with the might of the Maelstrom like that of ours, but it does hold creatures of terrible strength and appearance. Bone serpents of gargantuan size roam the poisoned sea with abandon.

Remnants of the Black Empire

The remnants of the fabled “black empire” are scattered throughout the Burning Expanse, but it seems as though remnants of it exist as well within the Shadowlands standing where it used to. However the storms that circulate in the blackened sands of that area of the Shadowlands prevent extensive search without extreme danger.

Some gods have made domains within the Withering or connected directly to the plane, though they are often minor in power or distrusted among the other gods, watched for their closeness to the Mortal World. Among these are believed to be the gods Valkyr, Eir, Samandei, and Corva, all concerning death and/or the travel of souls between the Material and Mandos, the realm of the dead, to be judged and sent to their afterlife. Though it is also possible that these gods simply use the Shadowlands as a convenient place to send their servants so that they may travel with ease through the Veil and into the Prime to gather souls.