The Painted Bush is a colorful bush that was native to the Island of Creation (specifically the Origin of Creation before its decimation due to the construction of Puretopia. It now exists in gardens in the city as well as sanctuaries around the Old World. The bush, as true to its name, looks like a pastel bush painted in an impressionistic style agains the landscape. It uses a combination of colorful foliage and Illusionary magic to make it appear to would-be predators as something other than a plant. In low-light conditions, the bush fluoresces, bathing the landscape in pink, green, and blue lights. Its berries, Swatch Berries, are intense in color and high in chemical elements such as sulfur, lead, copper, and cyanide. These make them great for dyes as well as consumption to satisfy the Vabuian Trace Taste.   These beautiful bushes were created by Emeny a personal and final touch to the landscape, with Gaia breathing her strokes into life. These bushes were created for no particular purpose but ended up being extremely useful to early Sterian and Puresterian peoples.

The tale of the painted bush extends far and wide, with visitors to the Island of Creation bringing back fantastical tales of these bushes. In almost all languages, the bush is named for its rainbow color.In Rashuroar it is called Thai Ohwo which means 'Bush of Many Colors', in Dwarvish the bush is called Zwanada Hrtrt which simply means 'Rainbow Bush', and in Elvish the bush is known as Ria Suwegio which means 'Refacting Bush'. in Chaoxin the bush was called Emenaed Dagiae, which simply means 'Painted Bush'.

The painted bush was planted by farmers who chose to farm on the origin region's more flat and fertile plains up at the apex of the mountain. The bush would absorb heavy metals such as mercury and other trace elements and produce berries that are based on what it absorbed.   This property of the bush became incredibly useful for people who were born with or acquired an allergy to one of the many trace elements common to Vabu. This practice is known as pure farming, and is the predecessor to off-worlder safe cuisine.   The berries produced by this bush are incredibly useful in the process of dying fabrics and paint-making. Its variety of intense and vivid colors was incredibly helpful to the dominant Unitarianism religion of the time of the Sters, where the use of rainbow was dominant due to its importance in their religion. The red and purple berries, however, were the most prized to the sterian peoples as they were important colors to their nationstate. The Puresters however valued cyan, white, and gold berries above all else, and required the seeding of specific chemical elements in the soil in order to grow.

The painted bush is a 1 foot high (on average) thorny, woody bush that has ovate leafs with a net-like vein structure, clustered together in a Pinnate Compound arrangement. The leaves luminesces using runes biologically woven into the leaves to give them a vibrant illusory glow. It has a deep root system that absorbs heavy metals and other chemical elements from the soil. Flowers bloom which give way to berries that store the excess heavy metals. 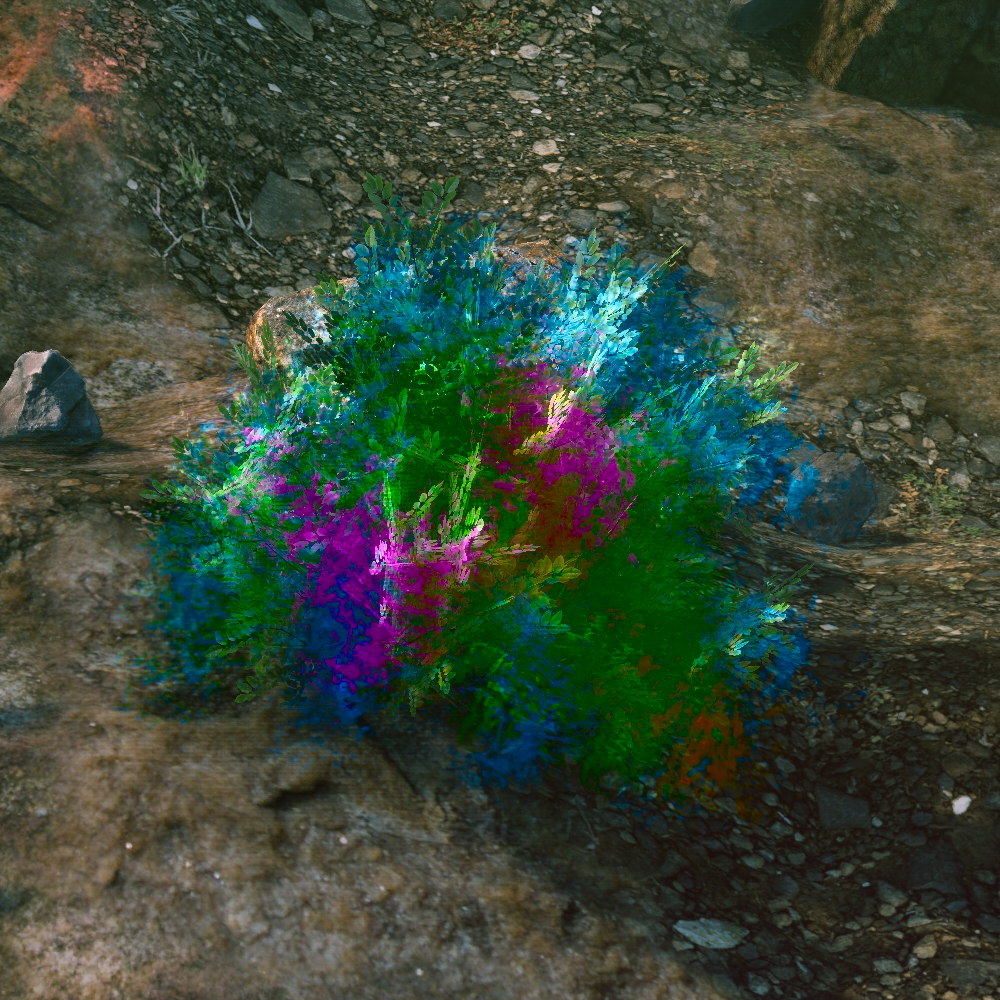 © 2021 | All Rights Reserved except otherwise noted. All images used are created in house or used under licence. All images without credit are created by Zack Hopkins-DeMerchant.
All nutritional information for food are largely based on information gathered form the U.S. Department of Agriculture's FoodData Central Database.
3D landscape scenes created in Flowscape. Photo-like scenes created in NVIDIA GauGAN.
Non-Public pages are considered CONFIDENTIAL INFORMATION. No parts of Non-Public pages should be shared without explicit consent.

This seems like quite a beautiful plant and the image you provided was a nice way to make that come across. The removing of metals from the envrionment seems like something very useful to do. That plant would be handy to have in real life :)

Nice plant and article! I like the colourful illustration of it that you have.   " make it appear to would-be predators as something other than a plant." What does it appear like? A colourful rock?   " such as mercury and other trace elements and produce berries that are based on what it absorbed." Oooh. So it can make poisonous berries with mercury? But come of think of it, all metals are toxic if too concentrated, so how concentrated are they in the berries?   " This property of the bush became incredibly useful for people who were born with or acquired an allergy to one of the many trace elements common to Vabu." I'm not sure why it's useful that the berries have a concentrated version of the metal. Or is it because if it's based on that one metal that means that it doesn't have other metals that the person is allergic to?   I love that the people are preferring certain colour types of berries and that they even add metal into the soil to help them grow :D   Just a small notes: you have a few typos that slipped through, if you can it would be a good idea to copy and paste the content of the article in Word to see them with the dictionary checker. 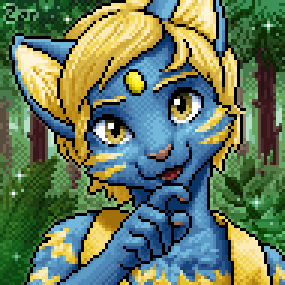 Hi there! To answer some of your questions, its worth noting that the vabuians are capable of consuming otherwise toxic elements. In fact in some cases, some are even required to consume these elements for their Trace Tastes, i.e. the chemical needed to maintain their hair and eye colors in certain situations. The berries are useful as a way low tech way to extract this element for use in food or supplements. Additionally, these berries could also double as pigments for paint. By allergies I meant more like sensitivities in most cases, and as far as its usefulness extracting these elements I was thinking of the bush being used like a phytoremediation plant. If it feels a bit shaky in terms of its belivability, its probably because it is. It is honestly less developed than I'd like. My goal is to try and make it for the peoples of this world to have technology capable of making food safe for people outside of their own universe to eat due to plot points within and outside the scope of this WorldAnvil world.   I also totally space pushing this article through the wringer to catch the typos, if I still can (I'll check with the contest page) I will get them fixed.   Thanks for leaving me a comment and a like! Cheers!

Gorgeous! I want to plant my entire garden full of them. o_o