"North of the Fell Crags lies a land many would deem inhospitable. A land where the permafrost meets the stone below, a land where naught but conifer forests can survive and even these are limited in their size and scope, the trees never able to reach towering heights of lusher woodlands like one will find in the southern regions of Durol. It is a land of mountains and glacial highlands, boreal woods, and tundra lowlands. A land of snow and ice for much of the year. Yet life thrives here in its own fashion. Many are its rivers, and its two massive lakes draw life like bees to honey. The coastal waters teem with all manner of aquatic flora and fauna as well, and though no trees or large plants may grow here, many are its swift growing and hardy grasses, brushes, mosses, lichens and small flowering plants. Summers, though short, are beautiful upon the Suranthi Tundra and something any journeyperson of the world should seek out to experience."

Suranth is a sub-arctic nation, though not a true tundra, for it is not beyond the tree-line. The land here is far from a barren wasteland, with all manner of variations in the terrain. Mountain ranges dominant its horizon, vast boreal woodlands, predominantly of various types of pine, spruce and fir break up the landscape of the windswept glacial plains. But even these plains are far from featureless, with many streams and rivers cutting through them, and many a crevasse, small plateau and craggy outcroppings. It is a picturesque landscape, primal in its nature and powerful in its visual impact upon the aware and artistic mind. 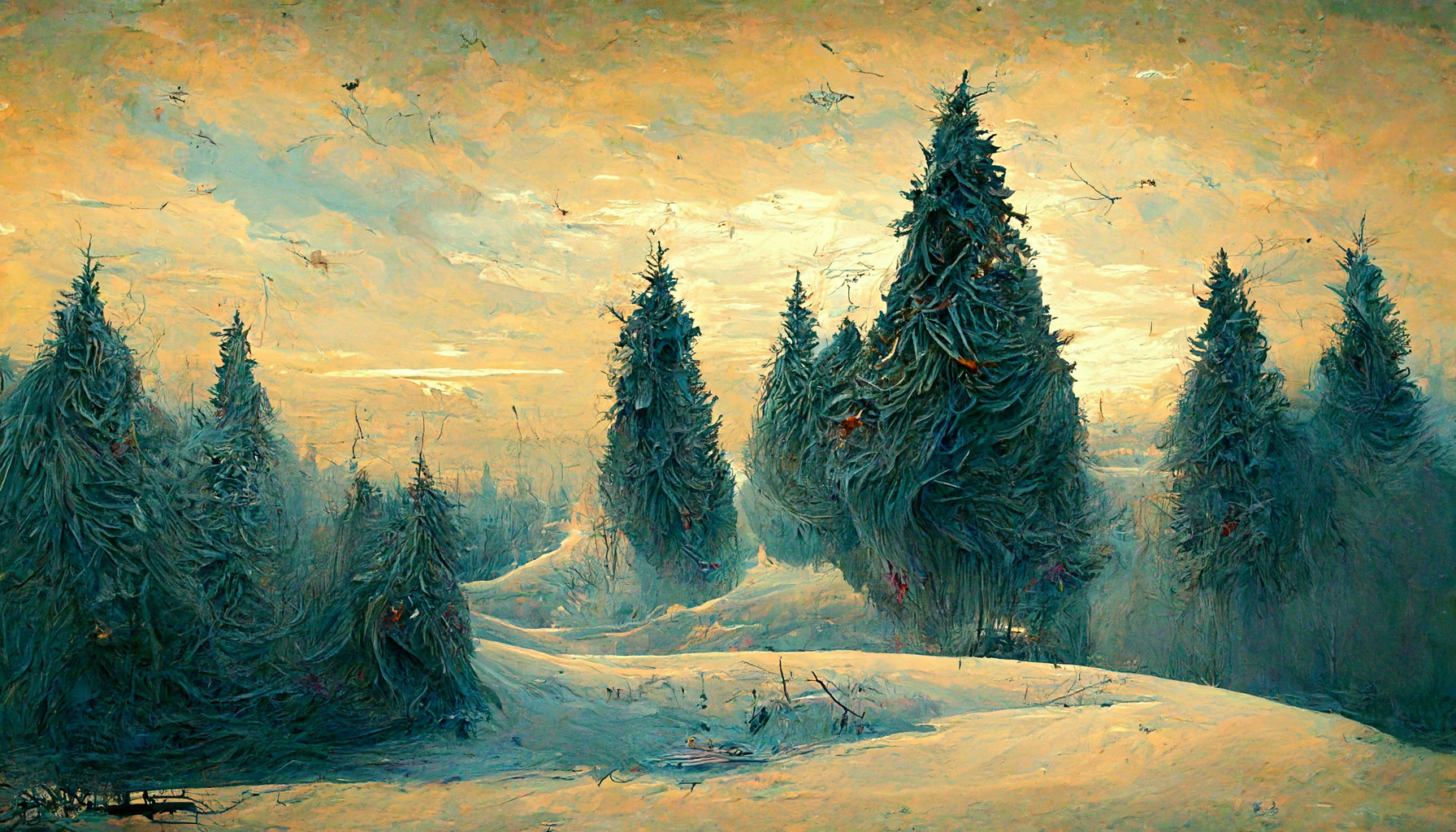 Artist's portrayal of the Needlewood on a midwinter dawn

One will find a greater variety here in the ecosystems than one might expect, both in plant and animal life. Many migratory birds, both inland and coastal species, spend summer and early autumn here, migrating south in the last week or two before winter fully takes grip of the land. The waters, both oceanic and fresh, are teeming with life, a veritable aquatic jungle. However these are small creatures, and as one might expect, larger beasts are less frequent and more notable. Caribou are one of the dominant large herbivores, though they, like many species, are migratory. Moose are not migratory, and are found primarily near the lake and riverlands. Heards of Murs Oxen wander the tundra plains as well, a highly successful species, their thick coats well suited to the winters here as well. They have the uncanny ability to digest the dead and rotting plant matter that ends up buried under the winter snows, and the seem quite content to plow the snow and pack with their snouts and heads to dig out such 'food'.

As to predatory species, again there are many smaller sorts, both aquatic and land based. Foxes, pike, badgers, wolverines, eagles and more. Wolves are one of the land's dominant predators, the packs quite transient, most following the caribou herds. White bears rule the coastal regions, feeding off fish, seals and other coastal game. Grizzly bears rule the riverlands and inland regions, masters of the salmon runs, where they feed in glut before hibernating for the winter. Sword-tooth Tigers rule the peaks and woodlands, masters of ambush, their mighty teeth and jaws capable of letting them even take down a white bear, though few would be the beast to try such willingly. Above and beyond them all however, though of no risk to most, is the orca. The killer whales are the premier predator of Suranth, mastering all in their aquatic domain. Fish, shellfish, birds, even foolhardy mammals, like a white bear, all are potential prey items to these magestic 'wolves of the sea'. It is harsh land, for though the cycle of predator and prey plays out in every environment, there is something about the Tundra Realms, something that makes it all seem more visceral, more primal.

Mosses and lichen dominate the flora, along with small, swift growing flowery plants like Arctic Cottongrass or Svalbard Poppy amongst many others. Dotting the landscapes near mountain ranges and all about riverlands are conifer woodlands, thick with all manner of pine, fir and spruce species, as well as some cedar species in the more southern regions. Many are the species of small mammals and birds that call these lands home, whilst even more numerous are the crustceans and fish. Further up the food chain, or larger herbivores however are more rare. Caribou, moose, murs oxen, and bighorn sheep in the mountainous highlands dominate that space. As to predators, besides the smaller sorts, snow owls, wolverines, foxes and their like, the apex predators in Suranth are of course the great white bears, their inland grizzly bear cousins, along with wolves, swordtooth cats, and in the ocean, orca.

Suranth is a land with a deep rooted, figuratively and literally, wealth of natural resources, including;

Suranth is rich in history, the land primal and scarred by it. As the last nation to be reclaimed some three hundred years ago after the Sundering, it is the land where the scars of that dark millenia are still the most visible. It is a land that is a technological leader in the industrial revolution that is gripping Valerick as whole, yet is one of the least 'civilized' by most estimations. With a sparse population of only roughly 2.3 million, though the region is well defined by historical claims and settlements reclaimed and rebuilt, the reality is those lands, the Connighclanns as they are called, are far from solid. The reality is the only 'safe' regions, by most modern definitions, are the routes along the major rail-line corridors and major federal road routes. Everything outside those corridors are less well defined and loose zones of control. Many still are the ruined and forgotten settlements, monuments of the ages before the Sundering. It is a frozen land steeped in history, particularly dwarven history. The mountain ranges are the long lost treasure to the Suranthi people, the places they wish to expand and extend into again, to reclaim some of these long forgotten places and the treasures within.


Show spoiler
In truth, though always temperate, the land of Suranth was not always a tundra. Once its climate was more like Raechin or Depenwood, though the geography was much different. prairie lands with many lakes, rivers and streams, the mountain ranges much smaller and with many hill-lands. However the when the world was broken, much of the country was stripped in the apocolaypse of the Sundering, and as the continent of Durol was altered and changed, so to was the very climate patterns of the world, the temperatures dropping substantially, turning the now rather barren rocky landscape over time into a mountainous craggy glacial tundra. Over time the land has warmed back up slightly, and conifer forests took root, glaciers began to melt, and eventaully the land became what it is today and seems to have been in the last few hundred years. Not much sense can be made of how the world behaved during the Sundering, and most folks do not try to hard as time goes on.

Suranth is very attractive to those seeking to walk the path of Exemplari, for the possibilities for adventure and tales worthy of saga and song are many. Even more so now, coming off of the death of High King Cormac for with the death of the High King will come a new leader, and there is very likely to be an opening of the coffers to come with that to fund expeditions into wild places seeking and following up on any and all sorts of rumors or scant historical records seeking resources, treasure, reclaiming lost places and heritage, and general expansion and consolidation.

It is also a place of great interest to travel to those of an engineering bent, for it is the nation that can boast to be the birthplace of steam power, of locomotion. It is a place of industrial diversity, its many cities places of learning, of the sciences, of education. Many are those whom come here to visit places like An Pointe Thoir, or the capital, Geata-Iarainn, solely to seek to take the entrance examinations of the Engineering Universities that are in those cities. Others still come to seek opportunity professionally in a growing industrial nation, willing to adapt to the difficult weather cycle for that opportunity.

Pilgrims of a different kind travel extensively into Suranth as well. As the birthplace and home of Sir Kartheart, it is also the birthplace of his religious following, and Geata-Iarainn is home to the Grand Temple of the faith, the Armory of Valor. Any member of the faith wishing to ascend into any position of authority at any church across the world must at some point make such a pilgrimage. This is true for any of the orders under the umbrella of the faith.

Besides this, and the expected merchant types seeking resources like ores, stone, coal or precious ghel, that sort of 'tourism' is one that should go without saying.