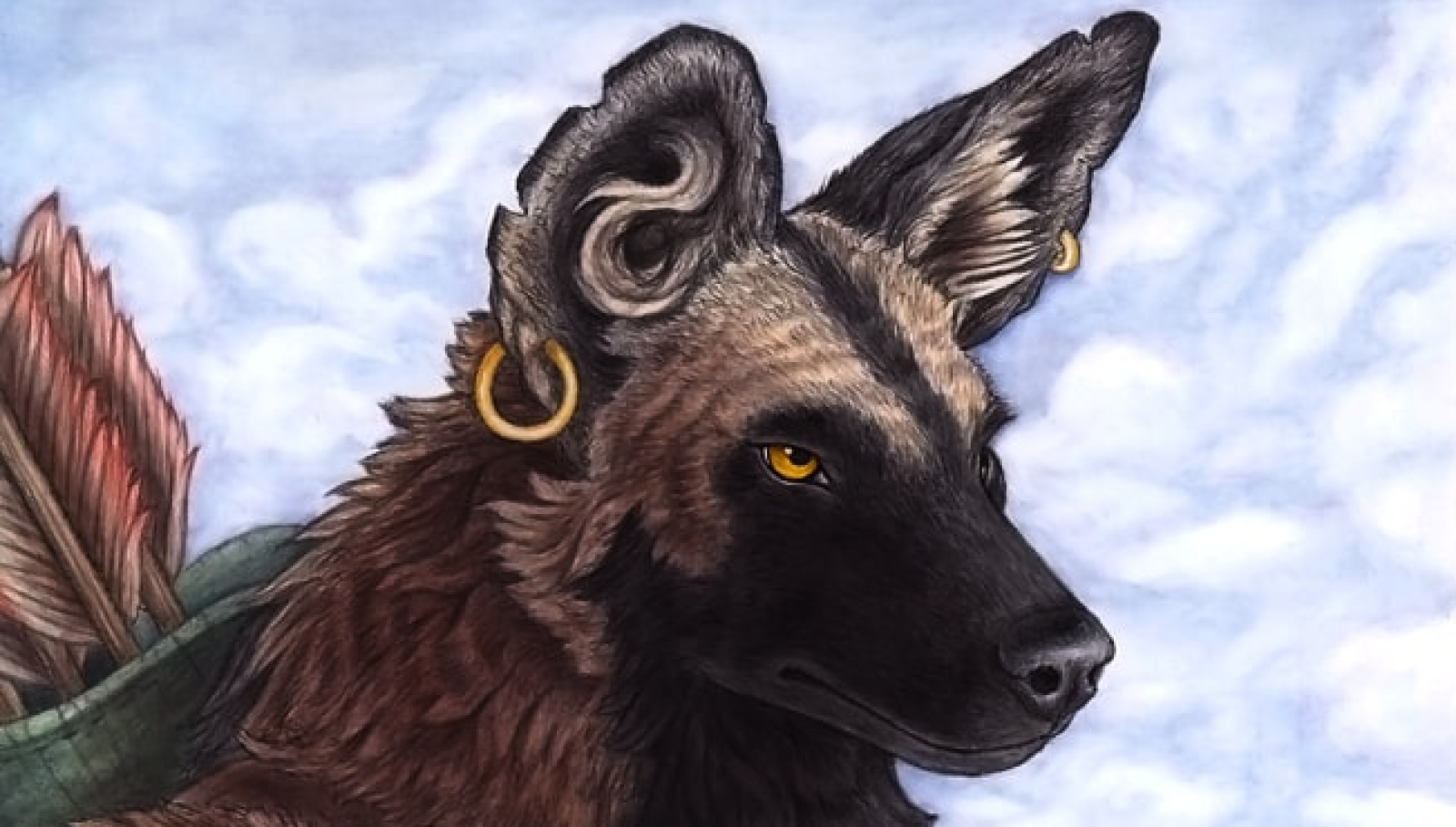 The Jackals of the Plains

The kuna are a collection of canine tribes who united under one banner thousands of years ago. Today, three of these tribes are all referred to as just "kuna", rather than their own phenotypical names. Before joining the Trifolk Alliance, they went by the name "the Natukunautep Nomads", they are now an integral part of Kykr society. In spite of their fierce appearance, kuna for known for being kind, warm and welcoming, preferring the company of others. They are charismatic, charming and a kuna makes for an excellent choice for a social character.

The kuna evolved in the deep south on the open plains and deserts of the region known as northern Kharamôr and lived as nomads and herders, traveling along with their herds. They were a tribal people with strong family ties and this trait still affect the way they form relationships today. They enjoy having many friends to spend their times with, usually live in larger than usual families and easily feel exposed and uncomfortable when alone.

With the formation of the Trifolk Alliance, the kuna quickly disseminated within the alliance territories and found their place as traders, entertainers and teachers. Today, 500 years later, the kuna are an integral part of the Kykr civilisation and are found at every level of society as equal partners. 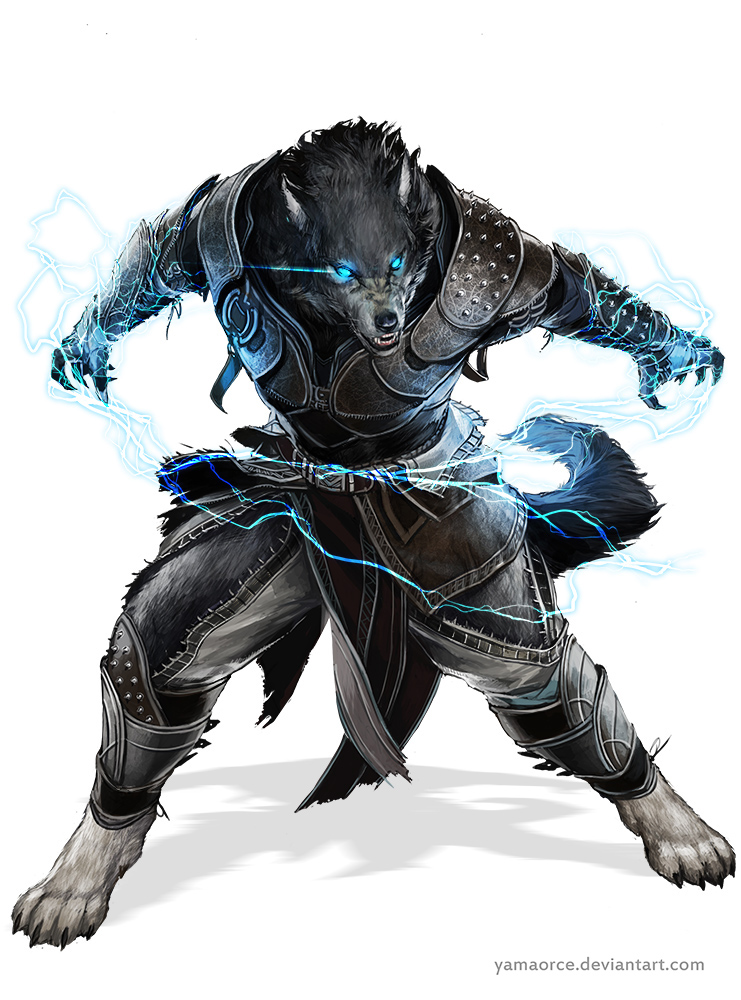 Kuna are canine-like in appearance with a wide, strong chest, thin waist and slender limbs. Their thighs are strong and muscular, allowing the kuna to be quick runners, especially if they forgo civilised manners and run on all fours. They have fur covering their entire bodies that is longer on the back, tail, cheeks and underarms. They have five dextrous fingers on their hands that end in sharp claws. Their feet have four toes that are alse clawed.

The Kuna are primarily made up of three phenotypes: The kunaupti, the natukep and the nihatmaturu. Collectively, their species' proper name is "Natukunaupti", but everyone shortens it to kuna. There are rarer phenotypes of kuna, but these are rarely seen and many believe them to be extinct or live in insular societies. The three phenotypes are so alike that most non-kuna don't consider them different species. Genetically, they are incredibly similar and are considered phenotypes rather than subspecies.

The natukep are hyena-like in head structure and facial features, have shorter, stubbier noses and broader, somewhat more rounded ears. They also often have brown or black fur on their snouts and their fur is multicolored. The kunaupti are jackal-like and have longer, thinner snouts and sharper, pointier ears. Their faces and furs are more often uniform in color as opposed to the more speckled natukep and their fur is glossier and softer. Kunaupti are usually more slender and somewhat taller than natukep. The nihatmaturu are rarer than the two others and are foxlike in features, with narrow, sleek snouts and bodies, triangular, furry ears and prominent cheek fur. Nihatmaturu have the longest fur out of the three and are often single-colored, even though there are patterned individuals. White fur is the most common among the nihatmaturu, as opposed to the darker natukep and kunaupti. Second most common coloration for nihatmaturu is a dark red fur with white detailing.

Kuna have lively faces with articulate facial muscles and expressive eyes. The eyes are usually green or yellow, set under pronounced brows. Kuna ears are long, triangular and pointy, but as previously mentioned, natukep usually have shorter, more rounded ears and the kunaupti's ears are usually long and thin. The "stereotypical" triangular ears are found on the nihatmaturu. The fur on their cheeks is longer than the rest of the face giving some of them a foxlike appearance. Kuna have sharp fangs they can use in melee combat. 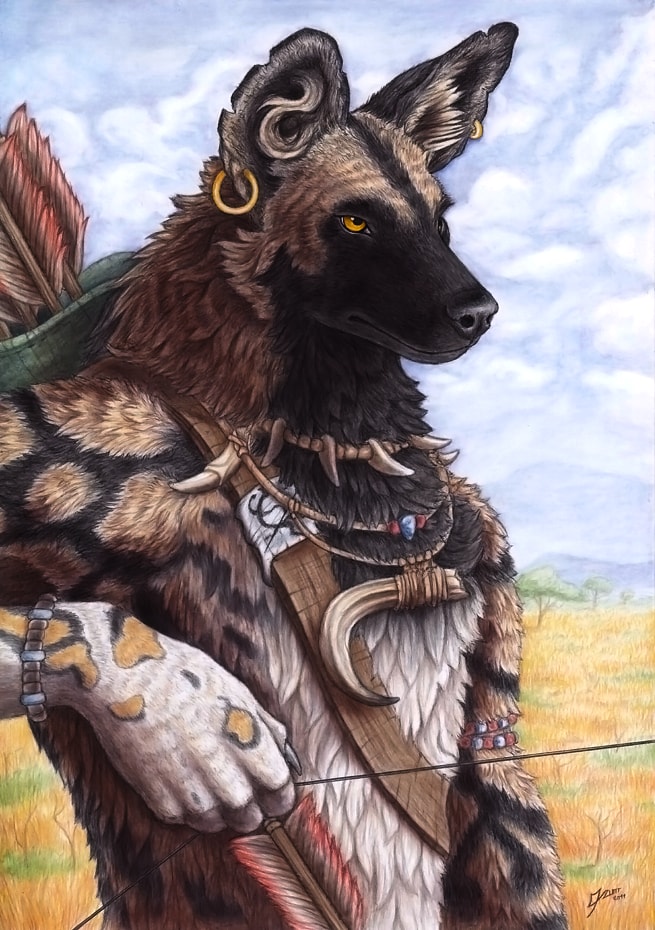 Slender, dextrous and tall, the kuna are excellent sprinters and can easily outpace any of the other species in a dash. Despite their slender builds they are quite tall, often reaching over two meters if they stood straight. However they have a naturally hunched posture which makes them to appear somewhat shorter than they actually are. Their ears are sensitive and kuna have good hearing, on par with vindral. They also possess hypersensitive noses and can identify individuals on their smell alone, smells too faint for most ther species to even pick up on, with the exception of some dru'un. They can also detect smells from further away than other species. Kuna unfortunately do not have good eyesight. They are both myopic and partially color blind, being unable to see clearly further than five meters without some form of eye correction.

Kuna age at about the same rate as illim and gestate for approximately 11 months. Kuna cubs are notoriously clumsy and take much longer to develop proper body coordination than other species. They are considered fully adult by the age of 15.

The kuna have a notable sexual dimorphism where female Kuna are, on average, about a foot (~30cm) shorter than the males and have an even slenderer build. Their facial features are also more delicate than the males, who by comparison are rougher.

Kuna have soft and beautiful voices with relatively small variance. Other species' individual voices vary more than between most kuna. The men have deep, barytone voices and the women have breathy, fragile voices. Both are perfect for talking and singing, further advancing kuna in the entertainment business.

Kuna prefer a balanced climate which is not too humid or too hot. Due to their fur they can handle cold very well, but seem to not prefer it over a temperate climate. Like most civilized beings you can find kuna just about everywhere in the world. Due to their preference for temperate climates, you find most of them in the Kfandr Bay area and on the Great Plains.

Kuna are often stereotyped as carnivorous beasts with their ferocious appearance, and while they certainly evolved to be a predatory species, the kuna can eat just about anything and their primary diet varies a lot with individual preference.

Gelsir, an old Nahut word meaning "rage" or "fury", is a congenital condition carried by all kuna subspecies. Few ever develop the symptoms, but those that do become progressively more aggressive and violent, eventually losing all sanity and reverting to a feral state. Kuna who are in late stages of Gelsir are referred to only as "Gelsir" to differentiate them from healthy kuna and also help build a detachment to them as people. Treatment of Gelsir kuna is something incredibly morally gray and anything that can be done to blunt the feel of moral ambiguity is welcome.

Gelsir is a neurodegenerative disease with genetic origins and is not contagious and not found in any other species.

While a single species according to definition, the kuna evolved as a plethora of phenotypes in the southern plains. Early tribal warfare saw several of these ethnicities become extinct before three dominant tribes emerged as real political powers. The natukuna, kunaupti and nihatmaturu initially squabbled for territory, but eventually banded together to fight the greater threat of roaming álfr packs, dru'un tribes and fay.

The Kuna spread across the Great Plains and became fruitful, fought off the dru'un who tried to invade from the Spineridge, and made a great name for themselves. Once they developed tools and domestication, they domesticated several different animals, including the fierce álfr that previously threatened them.

Once they encountered the Vindral Exiles and the Blood Coast Settlers, the Trifolk Alliance was born and with it the greater Kykr civilisation. 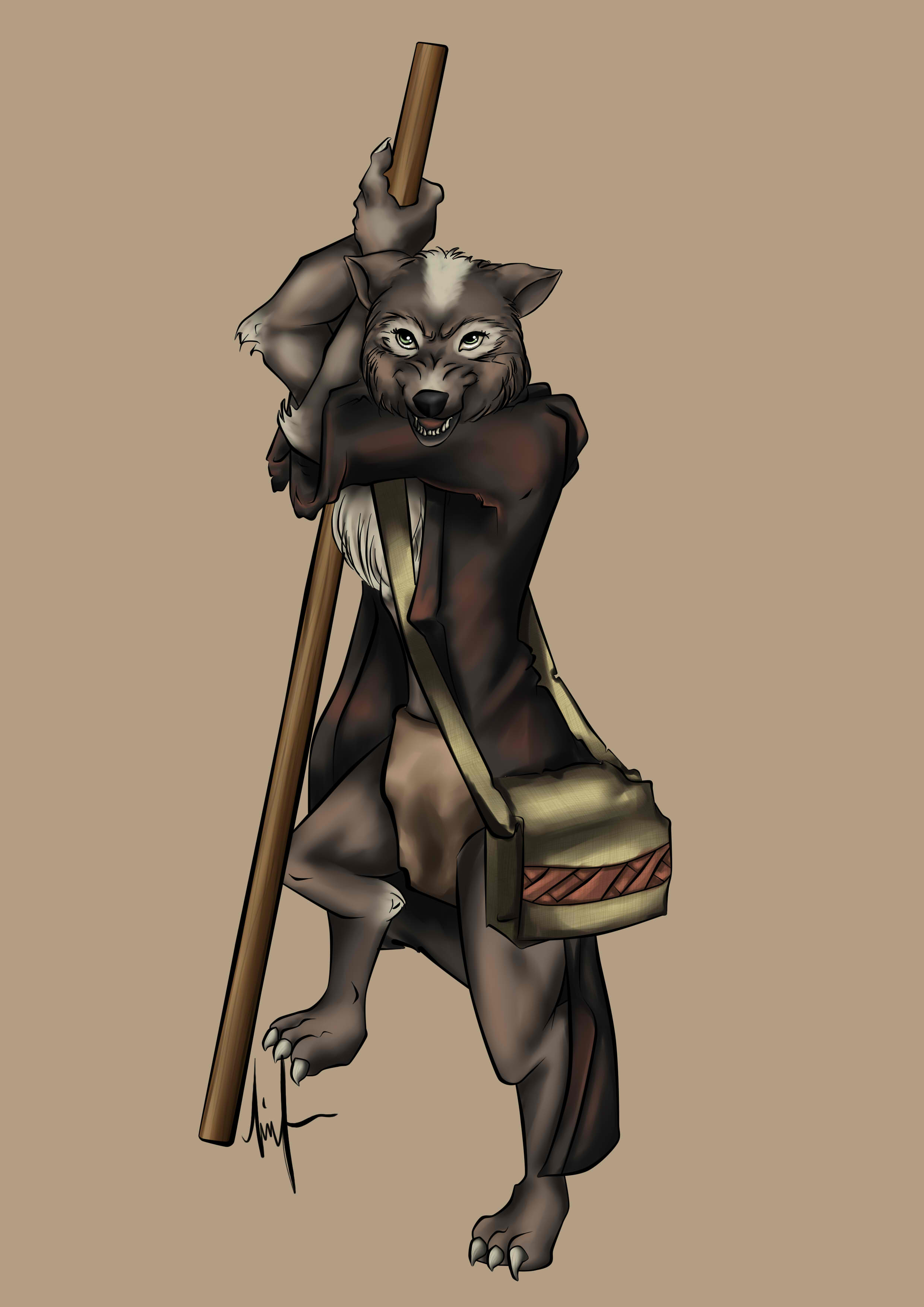 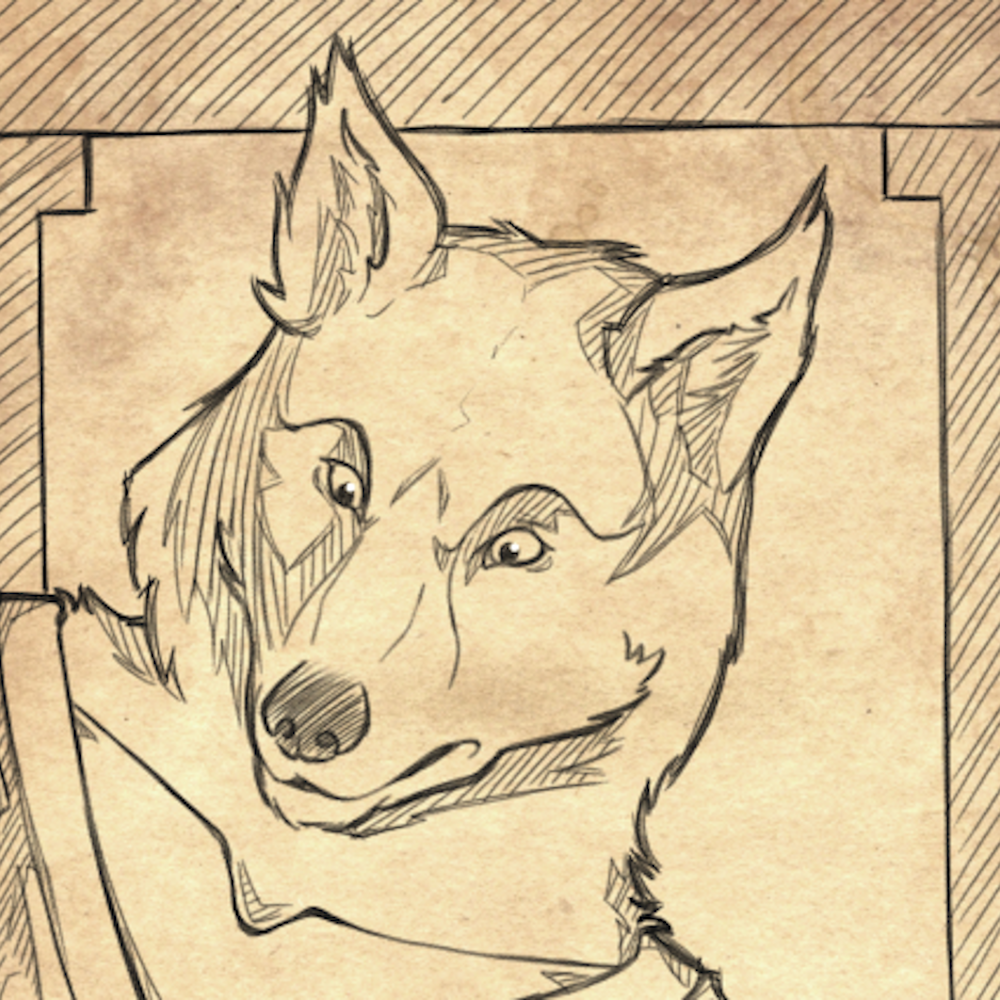 The Illim are a strong, sturdy and enduring species of humanoids.

The Vindral are a smallfolk known for their limited emotional range and ice blue eyes.

Join Dark Shadows Discord!
This article has no secrets.