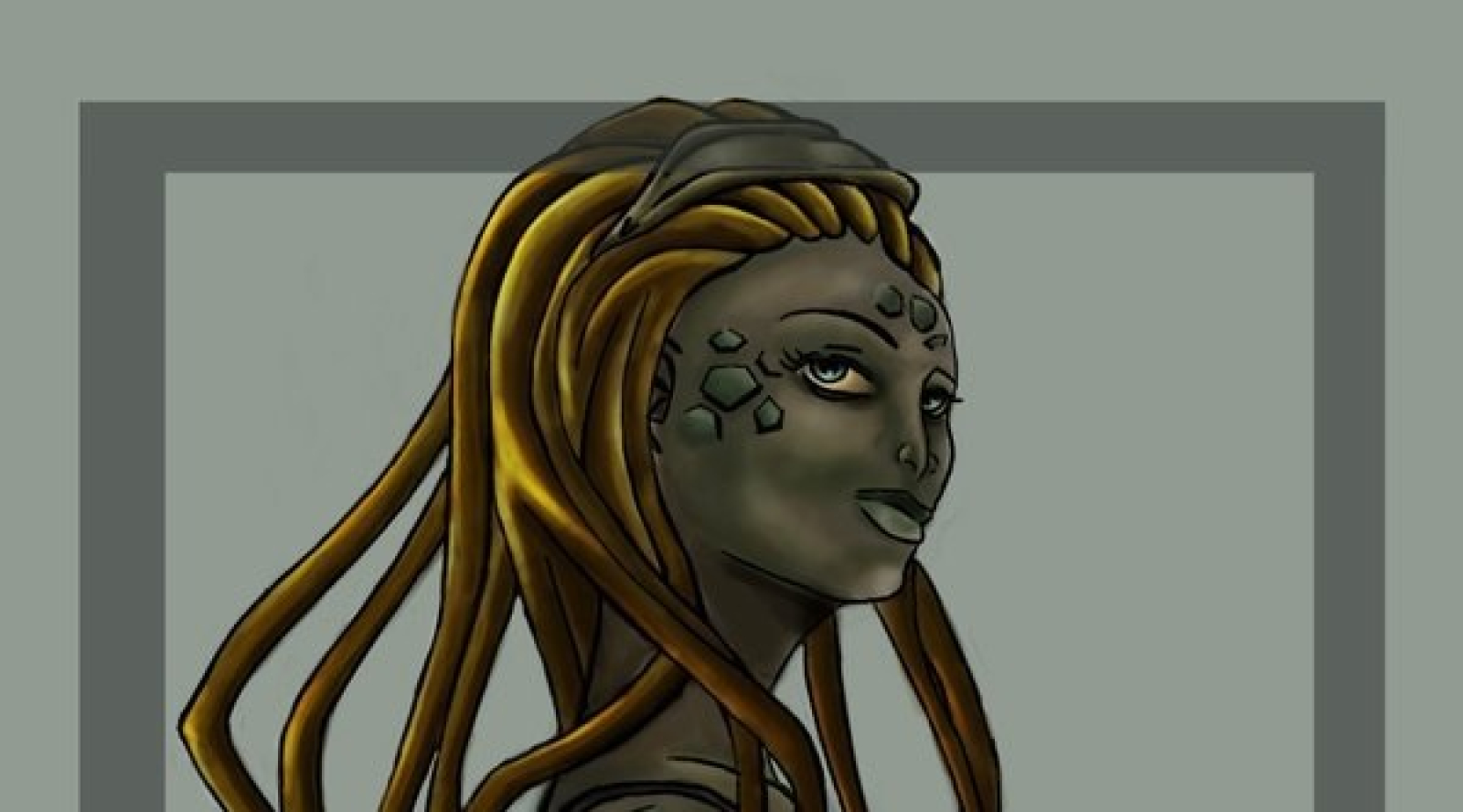 WIP! Not yet started!

The illim are sturdy and diligent, enjoy hard physical labor, the ocean and freedom. They hail from an ancestry of exploration and adventure, being the first species to brave the seas upon ships. They were one of two original species to join forces against the fay.

Illim are resilient, carefree and very curious as a species, so no wonder they were the first to find what was beyond the seas. Their curiosity have driven them to many discoveries and together with their allies; the kuna and the vindral, they have forged a mighty civilisation. The prehistoric illim settled on the frigid Blood Coast and early on discovered the secrets of metalworking. The shores and sediments of the Blood Coast is rich with iron, which they levied to make great ships to sail with on the seas. It also came in handy when the vindral exiles sought refuge among the Blood Coast settlers, fleeing the wrath of the fay.

Illim are strong, sturdy and good all-rounders and fit for any character type you might want. They excel in physical combat because of their resiliance, but they have the potential to be adept at almost anything.

"Dólgþrasi!"   The yell from his mother rang through the house like metal pans falling on a stone floor. He crept further in under the covers of the bed.   "Dólgþrasi!" his mother yelled again, as she spotted the bundle on the bed. "Did you steal the biscuits?" she demanded.   "No..." he whimpered. He absolutely did, but did not want to face his mother's wrath. His voice was drenched with guilt. It was a transparent lie, even for an illim.   Her face softened somewhat and she sat down on the edge of the bedding. "Dólgþrasi, what have I told you? No lies, boy! Honesty will get you far in life. Lies will make enemies out of your friends."   Dólgþrasi shuffled under the covers.   "Besides, you're not very good at lying." she added, with a smile. "At least I know now who took the biscuits."   "I didn't take the biscuits!" he insisted.   "Then who did?"   A long silence followed. "A town guard snuck in while you were out." he stammered.   His mother pulled the covers off of him, her ice-blue stare meeting his. She had one of her eyebrows raised, in that typical vindral way.   "Fine..." he admitted. "I took them." he looked down to avoid her eyes.   "I was hungry."
— Illim are not very good liars. Especially children.

Illim are bipedal, stocky and compact. Their tough skin, rough features and long arms make them look like they could tear down mountains if they wanted to. They're not too tall, sitting at an average of 170 cm and an average weight of 70 kg. Among all the Kykr species, the illim vary the most in physical appearance.

They come in all kinds of colors, ranging from dark gray skin to ocean blue. The same goes for their thick hair-locks that can vary greatly in color. This is because of a peculiar feature in their biology. Illim's skin and hair color is greatly influenced by where they grow up. But more on that later.

The most stand-out feature of the illim appearance are their crystal growths. These crystals grow naturally out of the illim's skin and are generally the same hue, only slightly darker or lighter than their skin. They grow near places where the skin may experience excess wear such as elbows, shoulders, knees etc. The crystals also flock near bony ridges, such as the backs of the hands, collarbones, jawbones, cheek bones and the brow ridge. Each illim's crystal pattern is unique and not two are alike.

The growths themselves are rock hard and the illim lack sensory nerves inside these growths. What their original purpose was is long lost to history but everything from reproduction (beauty) to tools and natural armour are popular suggestions. While the illim feel nothing on the growths themselves, they have nerves in the surrounding tissue, so they can sense pressure on the growths, but not soft touches.

Illim sturdy and stocky, built for strong labor and resistance to the elements. Most of them possess well defined musculature, even if they don’t spend any significant time exercising and their skin has this thick, almost leathery feel to it and is very strong. This makes illim unusually durable.

Their hair forms great, strong locks that are oily to resist moisture. These locks require a great deal of maintenance by the illim to prevent them from tangling and snarling together, leading to mold and bad smells. Most illim have taken it to custom to wear the hair in matted locks to prevent it from tangling together and rotting.

The hair is too tangled and oily in its natural state to make much sense wearing it loose. Those who do not care well for their hair find it becomes like a lump of tangled strands. The felted locks of hair become so dense that they can keep moisture for days. An illim must take great care of their hair or this state can cause mold to form and the hair starts to decompose from within the locks. An illim with a hair in this state is either ill, destitute or does not care about their hair.

Their hands and arms are strong, broad and stocky with their five fingers ending in stubby, but strong claws. These claws are strong enough to be used as makeshift tools for digging and such tasks. Their four toes are clawed as well.

Illim’s faces are characterised by smaller crystal growths that flock around their cheeks, cheekbones, jawbones and eyebrows. Their noses are narrow, somewhat flat and defined by a bony ridge that start at the edge of their brow ridge, and run over their eyes and down the centre-line of their nose. Illim have monolid eyelids and their eyes are somewhat deeply set, allowing them to be well protected by the bony brow ridge and the defined cheekbones.

An illim is considered beautiful when skin and hair colour match the preferences of the viewer, when their features are symmetrical and sharp and possessing particularly pleasingly placed crystals. Somewhat dependent on culture, males should have a muscular build, and women should have well-groomed hair and stylish and beautiful crystal formations.

The "kykr" are the dominant civilisation of the world, encompassing three sapient species: The Illim, the Vindral and the Kuna. They rule over the continent of Arjin in a diverse collection of cultures and nations.

The kuna are one of the founding species of the Trifolk Alliance and are a canine-like species who are playful and always enjoy a good laugh.

The vindral are a minute, fay-like species belonging to the Trifolk Alliance and the Kykr culture. They are most known for their emotional detachment, sharp intellect and great ambition.

While illim are rough on the outside, they are candid and honest as people. They prefer to be straight and to the point, rather than “tiptoeing” around issues. They usually don‘t lie and most are naturally terrible liars. With them being bad liars, they prefer to deal with facts and absolutes as much as possible and prefer to say what they mean, rather than sugar coat things. This can, sometimes, make them feel a bit direct and blunt, but they are friendly, positive and encouraging in general, so the bluntness is not as bad as it sounds.

Most illim are loyal, honest, a bit shy and often quite set in their ways, having trouble adapting to new situations and ideas. Much like their body shape, they are somewhat square and stocky mentally as well. But if you've gained the trust of an illim, it is not easily lost again. They are keen to be there for their friends, family and lords and their word is not easily broken.

Overall, illim are a calm and tempered people and don’t fly out into fits of rage or violence. They are mostly jovial and friendly, preferring to solve their issues through talking rather than fighting. They are also warm and welcoming to strangers, much like the kuna.

Illim are curious to a point of obsession. They ask many questions, don't really think twice before stepping through closed doors or exploring new paths in the forest. While this can in some cases lead to trouble, most of the time, illim lead exciting lives with many discoveries, new friends and frenemies thanks to their curiosity.

All illim seem to suffer, to some degree, from claustrophobia. No illim enjoys cramped or tight interiors, and while far from all illim will collapse in an anxious pile of sweat indoors, almost all of them will feel at least marginally nauseated or on edge while indoors. Especially caverns and heavy stone buildings seem to trigger this genetic claustrophobia.

The outstanding feature of the illim, aside from their crystal growths, is their highly varied skin and hair colors. The illim possess a weird natural ability to adapt their skin and hair color to match or blend with the environment they are in. However, this ability is non-voluntary and they have no control over it. In addition, their color will "set" at an age of about two years and then will never change again.

This has the interesting side-effect that you can sort of guess where an illim grew up, based on the color of their skin and hair. An illim growing up near a desert may have brown, gray or beige skin. Another near a forest or meadows will have green and yellow tones and so on.

Illim share many of the kuna's maturation aspects, both in gestation time and average age. The illim are somewhat more sturdy and have a slightly higher average age, but otherwise age almost identically to the kuna. Joint and respitory problems are common ailments among the old, and their hair will whiten, their skin will become wrinkled and their eyesight and hearing poorer.

A healthy illim who is not prematurely killed by a rough life, disease or famine will live to around 60 years of age on average.

The strongest and sturdiest of the Kykr species, the illim's thick skin, strong bones and dense muscles all contribute to making the illim walking brick walls. They are not prone to injury, bruising or cuts like other species and seem somewhat resistant to diseases as well, although not to the degree of their sturdiness against physical injury.

I like the sound of these guys, especially the gems that grow from their skin and the fact they're not great at lying or small spaces. I really like the section on the hair care they need to do in order to not go mouldy. :O