Beware the fay and their cold-hearted goddess! They will lure you astray and leave you to die in the snow.
— Traditional warning among the people of Arjin.

Ayla is traditionally depicted as a pale-skinned, tall vindral woman with blue hair and a plain blue dress. She is considered to be the patron of winter and is connected to the Fay. Her realm is the giant forest of Winterweald and she is said to reside at the top of the lonely mountain that sits at the center of the island, named Ayla's Peak.

Worship of Ayla is very rare among the people of the world, stemming from the connection to the Fay. No Kykr wants to be connected to her or her Fay.

With her connection to the Fay forest peoples she is also considered to be a goddess of magic and mystics. This further leads to her disconnect with civilized people, since magic generally is considered something bad.

A number of near ancient texts and tomes speak of Ayla and her magics, but most of them are either lost or even forbidden among the civilised folks.

A snake forming a circle around a large tree.

The preservation and return to domination of the Fay. Not necessarily by the destruction of others. 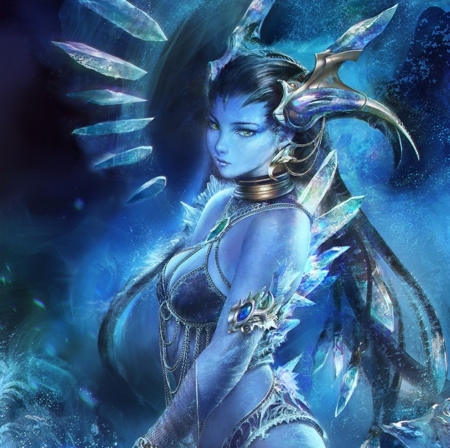