Episode 68: The Path of Darkness

Upon their travels through the Wastes, following a common pilgrammage path, the Wayfinders stumbled across what remained of a demilich, time storms that skipped them through days of travel jumbling their memories, and made their way around a blue dragon's oasis. Reaching what was left was


The Last Day of Travel

With a day's travel ahead and barely sorting through the jumbled memories of the past couple of days, the party spotted something off in the distance making its way towards them. After Nyx scouted and reported back to them that what looked to be a spectral undead was making their way towards him, the party was just cautious and a bit more welcoming of undead after their previous encounter. Nyx and Tetran approached and asked a couple questions learning of what waited ahead and that Death awaits at the Altar and to not follow the path of Light.   Moving forward with warning in mind, the group came across a portal that peered into the remnants of a knight with a sword through him in what clearly looked to be Ithlondian woods. Nyx, Tetran, and Vasya journeyed forward though later it was discovered that going through had been risky as the Needle of Mending was lost in an effort to assist them repair the broken sword. By hand, Vasya and Tetran repaired the sword with Vasya keeping hold of it eventually discovering that her name was written on the blade and she now had a longsword of her own that she could wield without issue.   Lastly, the group came across a point of rest, what looked to be a place of worship to Selune discovering Ambrosia of the Moon that could lift curses as well as alleviate lycanthropy- which Reylan took and made a plea to the goddess to allow her to help her friend- and also an anvil that could combine two items of the group's wish.

What Lies in the Darkness

Arriving at a fork in the paths, with one leading to the light and one into a dark crevice by the base of the plateau, the group followed the revenant's warnings and descended traveling for an hour or so before reaching what seemed to be a large circular stone monument with four large gateways. Killian made quick work as if a man possessed and driven by will with the others assisting in any way that they could before the stone monument lit up.

Something's not right. There's something missing from the center. Something black and gold... and shifting.

A bit reluctantly, Tetran steps into the middle activating the circle and revealing what the gateways were, doorways to what someone wanted most. After Nyx tried it as well, Killian stepped into the center, each doorway leading to the same place.

On the other side of the portal, lay something glittering and shifting with what looked like sentries standing guard. As Nyx and Tetran once again journeyed forward together to scan the area, the sentries turned to them and approached them weapons raised. The others rushed through the portal, discovering that it remained open for a little while after someone had focused it.   While battling the sentries was a bit brutal, Vasya was able to forge the key through focus and willpower, able to shoot it through the portal for Terra to retrieve on the other side. After destroying each sentry, what seemed to be a large stone snake awakened and before it could attack, the group rushed through before closing off the area.

Replacing the focus with the key and placing it in the center of the monument, a singular portal to the northside of the room opened revealing what looked to be someone chained to a chair. A prison.   As the others stepped in, the man called himself Nobody and traded answers to questions the group had in exchange for a sip of the Ambrosia which he identified when Tetran offered it to him to drink.   He revealed that he was just like them, adventuring and visiting other worlds. However, he had found something that the gods didn't want found-- a dark secret that revealed it all to him. He was shown the truth by something-- by someone... Belikor. The prisoner claims to be the Herald of Belikor and tells them that HE is coming. That the gods have sent many other adventurers to him and all he knows is that they keep dying as they've sent more and more with the Wayfinders being the latest ones.   He taunts them even after Killian cuts out what seems to be a metal rune jutting from his chest. In a small act of mercy, Reylan used her magic to clean him up as well as healed him, but channeling her energies through Arclight, which glowed red hot upon touching him. While she threatened to end his existence in an effort to gain knowledge about him, the sword warned her not to do and she backed down before backing out and the others closed the portal on him.

Placing the metal rune in the middle to see what focus this could show them, Killian inadvertently activated something. Each member of the Wayfinders was shunted to a place on the far edge of the circle platform and the magic from the center dispersed shooting into everyone burning something onto their skin. Looking down at their hand (or paws), they saw a rune etched in to their skin and understood what it was for, a spell to close the rifts.
Report Date
29 May 2021

Each time someone steps into the center of the monument, a portal opens as per the focus's desire of place, person, or item. Depending on familiarity, the portal may be specific or very broad merely opening up in a general location. 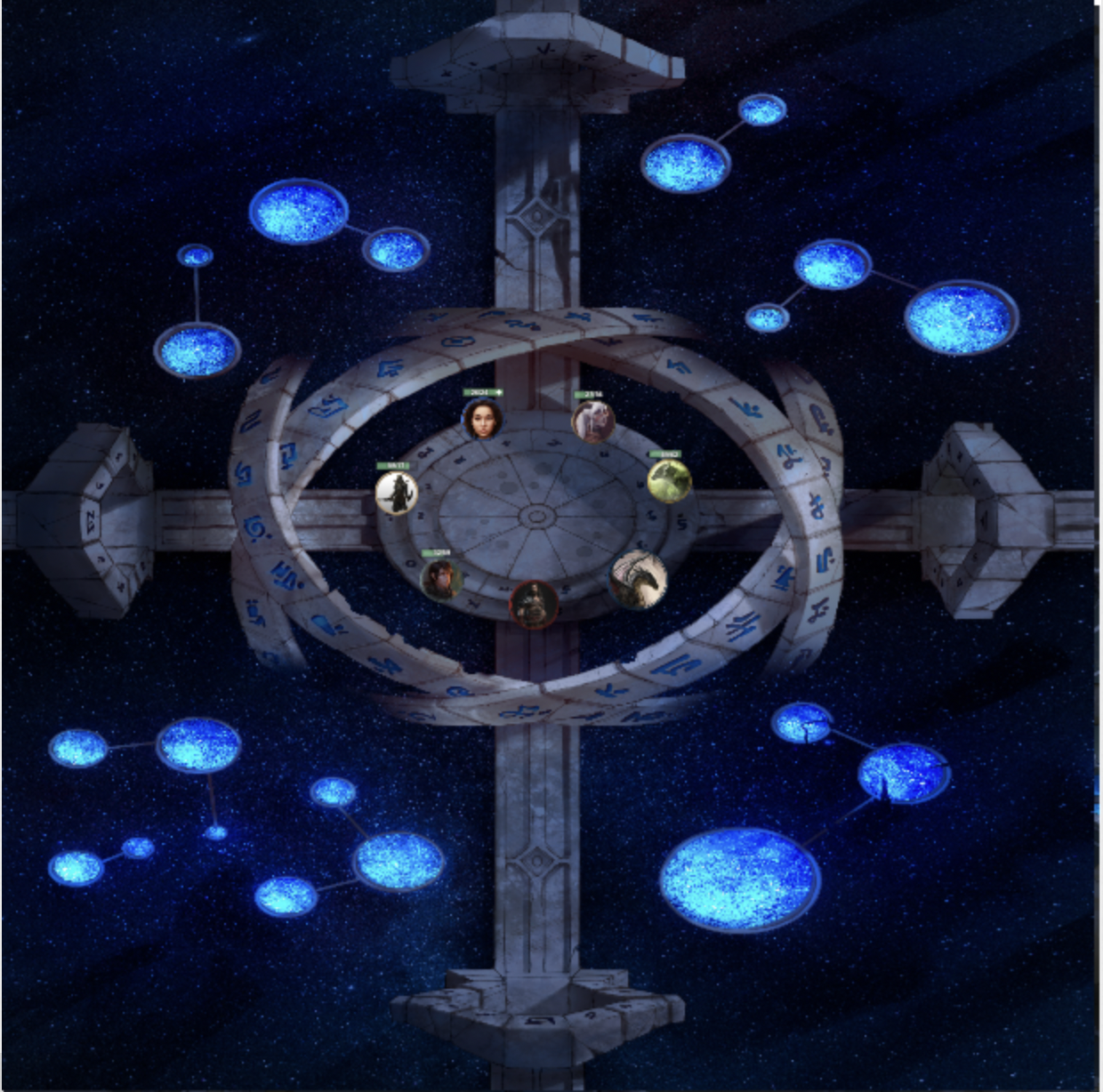 by Cze and Peku
When Tetran first stepped into the center, he saw a thundering celestial realm to the east, the interior of an inn to the south, a dark corridor to the west, and something that frightened him to the north. As his focus was not what they were searching for, Nyx tried next as he was the only one that could possibly fit the black, gold, and shifting-- though Nyx only really fit two of descriptors. He opened a portal to a library, one to the captain's quarters of the Blue Falcon, one into Arvanoc, and one into a field of the Confederated States.   Killian took over the following attempt and all his portals led to one location, the canyon of the key. Once the key was retrieved, the item itself was used as a focus, placed into the center where a northern portal was opened into the Prison of the Herald.   After shutting the portal and utlizing the rune, the party uses the portal a couple of times. Valentine while unable to get two portals to stablize, he was able to get one opened to the interior of an inn where he asked a familiar halfling some questions before rejoining the others. Reylan's focus was really two things, the Blue Falcon to the north and Artemis's home to the east. Using her one minute, she rushed into the eastern portal to give Artemis the Ambrosia of the Moon Goddess to help him in his quest to free him and his wife.   Tetran, after using the portal to check on someone, tested out the group's theory of how the portals work and was able to open a portal to the Herald without the key before agreeing with the others that the key needed to be hidden as a whole, whether broken or pieced together.   With each use, the portals seemed to dim and dim further and no one could hear what was being said from one side of the portal to the other save for telepathic means such as Nyx's mental messages or the use of 'Message'.   However, when Reylan used the portal one more time, she focused on one person, her mentor Ellana able to conjure up a portal to her quarters where the woman was able to communicate through the portal as if it were open space. After taking the key and the others seeing a bit more than they bargained for, Ellana dispelled the portal and from the group's observations, they believe that they have one more use left.
Episode 67: The Power of a Soul
Wayfinders Session Notes