This clandestine means of obtaining the meat makes it seem all the more decadent!
— Gerhard Minestra, food critic

I first tasted this dish at a small restaurant in Pekubogo Monin after a day of play at the Pleasure Villa run by Amando Fazio. The activity there was, shall we say, strenuous, and we built up quite a hunger. We headed down the street and found this wonderful little place making dishes that were a fusion of Baduhmian, Orsholonian, and Chadi. The variety was amazing, and due to the city's location along the shoreline, the seafood was magnificent.   We sat on a veranda looking down the street, and in the distance, we could see the ocean and the faint white line of foam from crashing waves. We could see the sun reflecting off high, wispy clouds to the east, while to the west, the sun had already peaked and was dropping toward the horizon. The sea air served only to enhance the appetite, and by the time a beautiful Chadi server had come to our table, we were famished.   After some small talk and a bit of teasing about the initial awkwardness at the Villa, the server brought us some wonderful mead from the south of Orsholon. It had a crisp apple taste and a slightly sticky lip feel. The aroma was a mix of green apples, cinnamon, and mint. And odd combination that somehow played perfectly together. A swirl around the mouth revealed the heat from the alcohol on the palate without a true burn. Simply delightful!   The server sauntered over with a small plate of fruit, cheeses, and charcuterie and handed us menus. Selections included non-meat items, poultry, meats, and fish. Some of the more interesting items included a baked fish from just offshore called Ogre Cod cooked in a yak butter sauce, Baduhmian oxtail soup, and roasted Akuapa Mekape. The latter was charred first over an open flame, then the skin peeled and removed, exposing the tender meat to the flames. Served with a spicy root sauce over a bed of Chadi rice.   But the item that intrigued me most was the Baduhmian Crackling Beef. The cut of meat used is thick beef tenderloin, roughly the size of a balled fist. It is seared quickly on both sides, then put to one side of the open pit grill over smoking applewood to finish roasting to the desired doneness. While that sits, small cubes of "Dwarven Bacon" are tossed into a vat of boiling oil. This, of course, is not true Dwarven Bacon, but a local product that purportedly is as close as you can get to the real thing without risking your life on the high seas. These cuts of bacon include a bit of meat, a bit of fat, and a small section of skin.   The fat quickly renders off in the roiling cauldron of oil, and the meat cooks up to a crispy consistency. The skin also cooks, turning into a light, crunchy layer of goodness on one side of the bacon. Melted bacon fat, crispy pork, and crunchy skin? Yes, Please!   The textures are heavenly! The soft, slightly sweet rice is a wonderful complement to the gentle heat of the sauce poured over the tender beef. The sear on the tenderloin gives it a firm surface, but the meat cuts like soft, warm butter once you have made the initial cut. The small cubes of bacon add a crunchiness to top off the textural wonder of this dish, giving a pop to the sauce and dimension to the rice.   Of course, not lost on the diner is the fact that Baduhmian Oxen meat is a "forbidden" food, as the oxen are not raised for slaughter. The oxen must be smuggled out of Baduhm, at risk of penalty by death, before they can be slaughtered. It is believed that they are often brought just across the border to Orsholon, then taken to a small dock on the Nawal Sea coast to be shipped out. This clandestine means of obtaining the meat makes it seem all the more decadent!   This meal is a wonderful, sinfully good way to enjoy the evening, and the savory dish fully sated my companion and me. It took a bit of convincing on my part (and few pieces of gold), but I was able to get a transcription of this wonderful dish. If you cannot obtain the Baduhmian Oxen meat, then any tenderloin should do but may not have as rich a flavor.

All Images created BY Kahuna the Elder, with source materials from Pixabay, Pexels, Unsplash, Artbreeder and public domain sources. 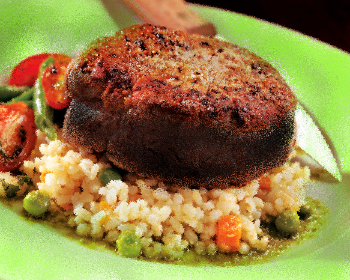 I like the POV of the day mixed in with the meal. You started the recipe itself with "Fry bacon" and this is always correct. It's how I started breakfast this morning!

Ooh, I may make that tonight! Without using Oxen, of course. Nicely done!