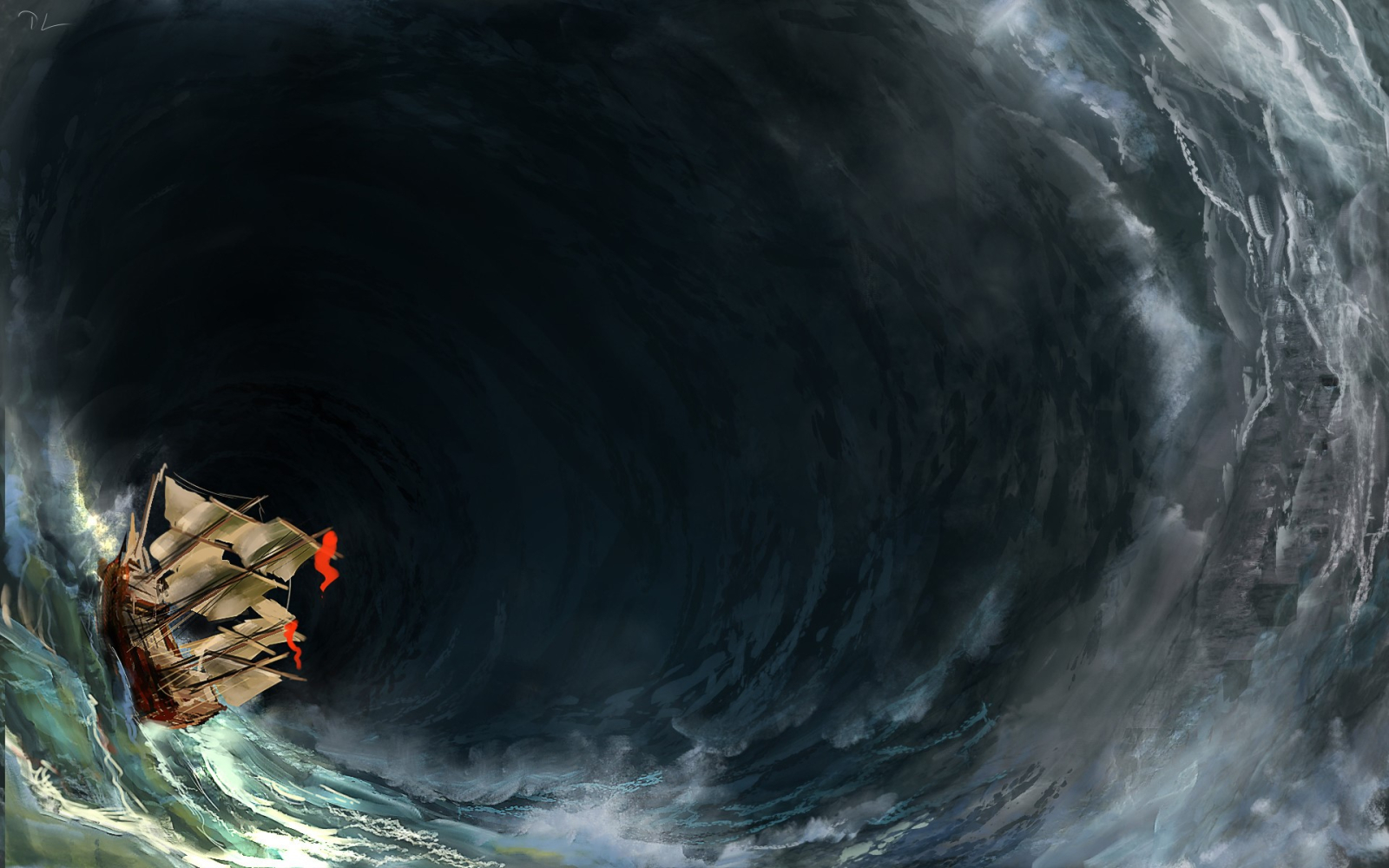 I was sure we was 'bout to meet our doom - crested 'round the cay and came smack up against a half dozen Jugeum Men O' War, bristlin' like angry sharks after three whole days of chasin' our sorry asses 'cross them choppy seas.   'Cept for him - we could hear the bloodcurdling screams, howls, scrapin' and bangin' from his room as he worked.   "Now listen boys, it's time to meet our fate" the cap'n said - 'cept when the smoke cleared, four o' the six were smokin wrecks, the last two fleein' for their lives into a howling storm 'came out of nowhere. Ship was possessed, i tell ya - whole damn thing movin' by isself, riggin' whirling about like mad, sails filled with air that never blew...never doubted him again, after that. He'd made us damned rich men.
— Handwritten account of the Frigate Ynnograd's victory in the battle of the Kitaran Channel

No one exactly knows what rigors, trials, and tribulations one must undergo to fully become one of the mythical Sailshamans, but from the rumors whispered in the darkest reaches of ships across the world many speak of deeply spiritual journies undertaken by prospective Sailshamans involving ritualistic use of mind-alterting incense to go on a spiritual journey to commune with mysterious spirits and beasts where prospective candidates put their lives on the line to submerge themselves in the mystical "other-realm" of spirituality that gives them their mysterious voodoo powers.

Because they are so incredibly rare outside of their homeland of the Khyarmani Atoll, the Sailshamans are almost assured to experience great wealth and success in their lives if they can but find a decent, honest ship and crew who requires their services - though even darker and sketchier crews are also incredibly viable career paths for Sailshamans who are more comfortable with looking over their shoulder and keeping one eye open at all times.

Because of their incredibly high demand and exceedingly low supply, a talented and qualified Sailshaman can demand nearly any reasonable payment from the crews with which they serve - though they usually demand more esoteric payments such as the rights to the organs of sea creatures the ship finds and kills, the right to seemingly useless baubles in plunder and treasure hauls the ship takes, and other potentially shamanistic or arcane forms of payment...though some have been known to settle for a portion of plunder or a regular wage, depending on the Sailshaman and the crew in question they join.

The benefits of being a Sailshaman are innumerable - at least, from the perspective of the countless sailors who yearn for their services. In contrast, their homeland views the role as almost sacrificial somewhat - viewing them as those who give something about themselves, something vital, up in exchange for the strange voodoo powers of the Sailshamans. As such, while the material benefits of the Sailshamans are countless and many in the wider world, the benefits in their homeland are somewhat unknown.

Sailshamans serve as spiritual guides and mentors for their people(For those who remain in their homeland), though even those who venture far afield and serve in the crews of all manner of sailing ships seem to operate with a goal in mind: though whether that be to find something and bring it back or something else, is unknown. Wielding their strange voodoo powers over storm, rigging, wood, water, and space itself they move towards goals unknown - some seem to wander aimlessly serving on various ships for months to even decades at a time, while others return home to the Khyarmani Atoll almost immediately after they leave.

In their homeland of the Khyarmani Atoll, the Sailshamans seem to serve the role of 'shaman' - operating as an expert of the mystical and supernatural while also seeming to serve the role of mentor, guide, and repository of their people's history, lore, customs, and traditions. They are revered and treated with great respect, but also with a strange forlorn respect - similar to what others may have for veterans of horrific wars who sacrificed everything for the sake of one's home.

The amount of Sailshamans in service is altogether extremely low - as they only originate from the customs and traditions of the natives of the Khyarmani Atoll, of whom only a small percentage actually end up leaving that homeland to serve in the wider world, each sailshaman is understandably in extremely, extremely high demand.

The history of the Sailshamans is mostly unknown - the secret nature of the natives of the Khyarmani Atoll who dislike sharing their traditions and secrets with outsiders means that the Sailshamans have remained an object of great mystery and intrigue for many years.

The tools used by the Sailshamans are strange fetishes, shamanistic totems, unsettling powders and inhalants, bone-carved implements, blood, and many other strange and unsettling objects and rituals with which they carry out their unsettling practices. Adding onto their strange implements, the Sailshamans seem to ritually carve, tattoo, and maim their own bodies for the sake of their work - carving strange patterns into their bodies, blinding themselves, and countless other strange circles, channels, and pathways into their flesh to aid in their strange and otherworldly powers.

When they join up with a ship and crew, Sailshamans tend to prefer either operating out in the open on the deck of the Ship on in a secluded cabin in which they can practice their strange voodoo rituals and strange magicks without prying eyes. Almost universally, their work produces horrendous sounds, bangs, scrapes, smells, sights, and more - as if hell itself begins to scream around them as they work.

The services provided by the Sailshaman primarily deal with protecting a ship and its crew - they are an invaluable asset to any good ship they serve on, as they strange and shamanistic magicks let them control wood, sail, rigging, weather, storm, and even move the ship between the planes itself in some extremely rare cases. They can do anything from allowing a ship's attacks to find their way without deviation into the most vulnerable spots of an enemy ship, make enemy attacks miss, and countless other benefits and boons only limited by the captain's demands and their own creativity.

The life of a Sailshaman is inherently quite dangerous - not only because their rarity means many would kill ships and their crews to get them and possibly enslave them. Their own magicks wreak havoc on their bodies over extended periods, such that while many elderly Sailshamans are unfathomably powerful, they are often bereft of nearly every sense except touch, crippled, missing limbs, and wasting away as they work. 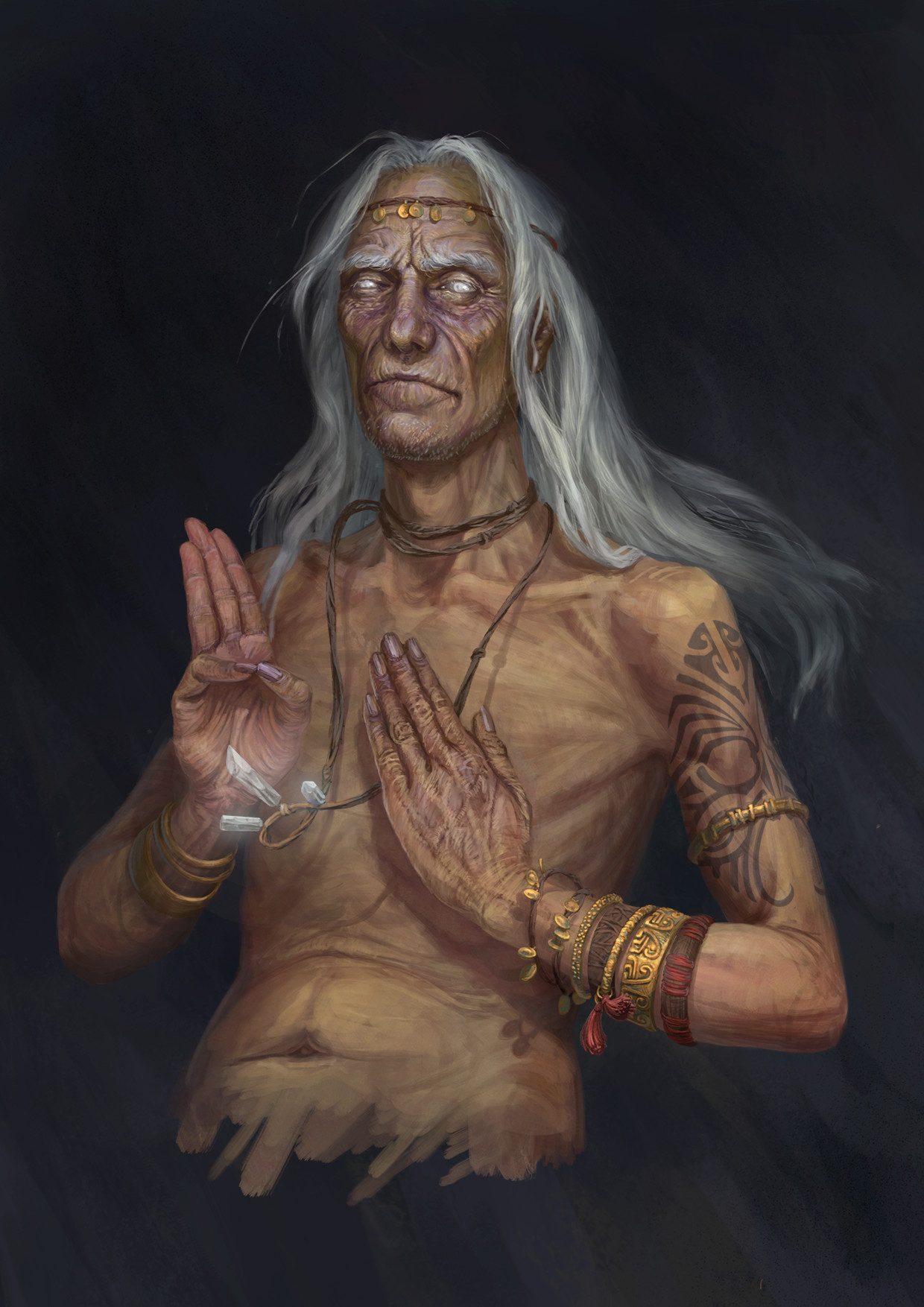 Alternative Names
The Scarswains, The Blind Bosons, The Shipwhisperers
Type
Arcane
Demand
The Sailshamans are in constant demand by nearly every nautical ship and crew on the seas, each desperately yearning to have the invaluable skills of one for themselves.
Related Locations
Used By

Thank you so much for the beautiful article. I was very pleased that it was included in the professions and would have so wished that you had made it through the competition. So on this note: I found the idea of linking shamans to the sea extremely creative and the depiction of it very well done. Including the anecdote, which also aptly had a completely different level of language. I would be happy to read more of this.