Barol Tree-Feller is a half-orc adventurer and historian from the town of Forough, in the nation of Zephra. Born to an orc mother and giant father, he's spent much of his life attempting to learn as much about the wider multiverse as is possible. Throughout their life, he has endeavored to compile the collective knowledge of all of Yrnath into one complete text, so that others may easily come to share in the knowledge that the world holds.

Barol Tree-Feller has, to the best of their ability, actively attempted to hide their upbringing. That being said, as this account is being written by Barol himself, this is to be the only complete account of his birth and upbringing that will be put to paper.   Barol was born in the year 2E 344, during the Age of Wonders. His mother, Saoirse Tree-Feller, was a well-respected orc chieftain who was known for favoring discussion over conflict. His father, Ozar Tzun, was a wandering Cloud Giant who had crossed Saoirse's path during a military exercise. The two began talking as a result of this chance encounter, and soon grew close to one another. In time, the pair would welcome nine children into the world, with Barol being the seventh such child. During the time that Saoirse was pregnant with Barol, her tribe's oracle had told her of the greatness their future held, and the importance of raising them to be ready for the world that awaited them.   The two parents had vastly different opinions on what the oracle's advice had meant. Saoirse had decided it important to largely disregard the oracle's advice, as attempting to ensure his fate might end up derailing it instead. She raised the young Barol as she did the rest of her children, teaching them the importance of understanding your opponent and looking for non-violent solutions to problems. Ozar, however, believed this prediction to be a warning, and took it upon himself to train the young boy. Once Barol turned 6, Ozar began isolating him from his siblings. The next several years were filled with grueling tasks and harsh punishments, nearly killing Barol on several occasions. Ozar's behavior towards his son would drive an irreparable rift between him and Saoirse, leading to his banishment from the tribe.   After Ozar's banishment, the young Barol, now 13 years of age, would receive near-constant attention from his mother and some of the elders of their tribe. While Saoirse had wanted to make up for the damage caused by her now former husband, the elders worried that the damage done had set him too far off his destiny, and hoped that they could reorient Barol towards their predestined fate.

As Barol's destiny began to take shape, it soon became apparent that his future was filled with events that would spell the end of their tribe. The elders of the tribe began to debate what to do with the boy, though shortly after his 16th birthday, the universe would decide for them. In the year 2E 360, the banished Ozar returned to the tribe seeking revenge. As the tribe began to put up a resistance, the disgraced Cloud Giant had already made it to the house of his former lover. Bursting open the door, he was met with his children, all standing against him. All, it would have it, except for one: Barol. Thanks to the intense training he had received, Barol had a great deal of knowledge about how his father fought, and by the time he made his way into the house, Barol had already encircled him, and delivered a blow to Ozar's back, paralyzing him. As the wounded Ozar lay bleeding out on the floor, Barol forced him over, allowing his father to see that the one taking his life was a killer of his own creation.   Despite the quick death of their leader, the rest of Ozar's forces were still hell-bent on raiding the town. Dozens were killed, including two of Barol's older brothers. One of Barol's sisters had also been lost, taken prisoner along with a number of other women as prizes for the invading army. By the time the fighting had stopped, Ozar's forces had also stripped Barol of his home, reducing the tribal settlement to ashes. In the center of town, the raiders had tied the elders of the tribe to the posts of their tent before setting it ablaze, causing the smell of burning flesh to spread throughout the ruins.   Saoirse would lead the expedition to find a new place to settle, now that she was the eldest member of the tribe. Instead of joining his people, however, Barol chose instead to follow after the raiders who had burned their home, hoping to rescue those taken as prizes by Ozar's barbaric forces.

Barol's journey would eventually lead them to the D'Nalsi Islands, a group of landmasses in the Vertric Sea. In the year 2E 362, they experienced an encounter with Aestra, the D'Nalsi pantheon's goddess of wind and air. They informed Barol that, during the Age of Lost Shadows, the disruption of the heavens had led to the death of the figure known as The One, the quasi-head of the pantheon. 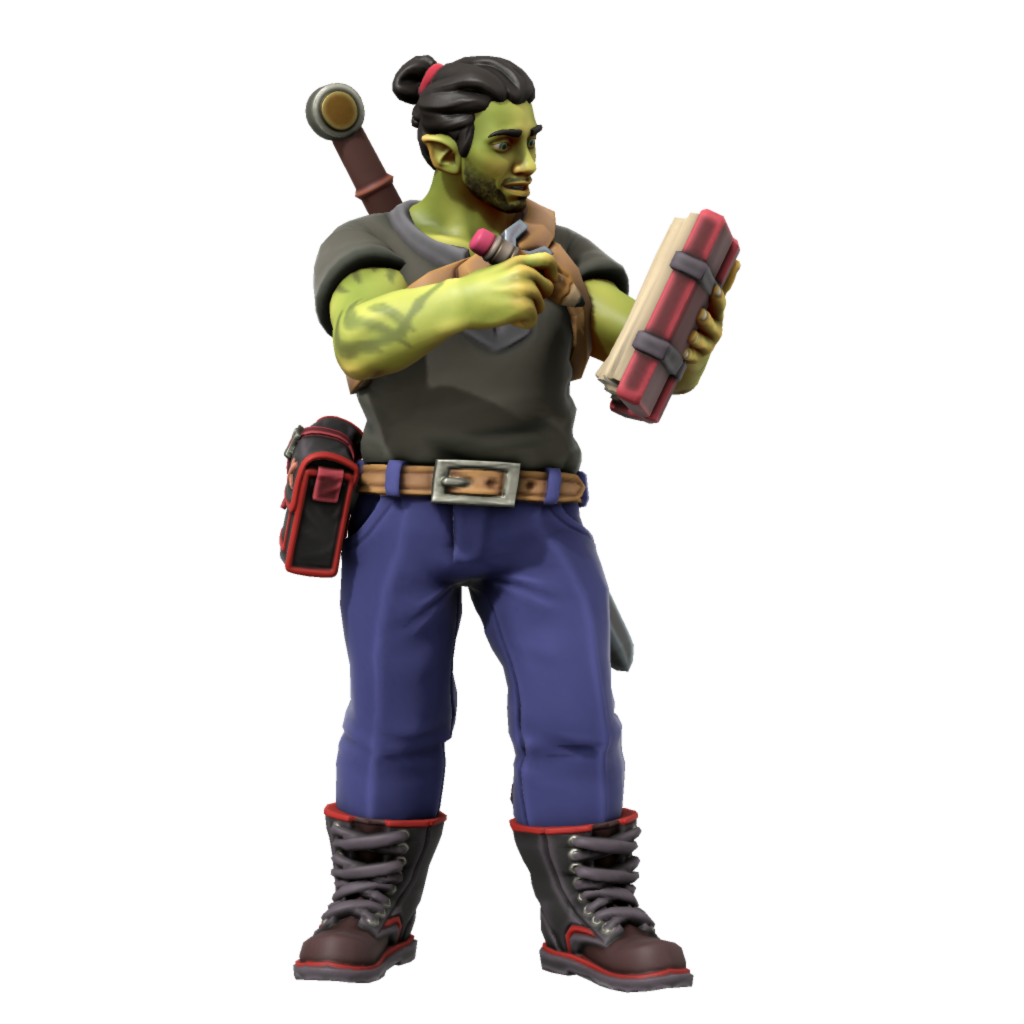 Pronouns
He/They
Author's Notes
I must say, the prospect of having to write my own biography into this book was not something I wanted to give much thought. That being said, there is nobody more qualified to tell this story than I, and gods know I certainly couldn't trust anyone else to do it.
Supporting Cast / NPCs