Yonderverse    Dimensions    Sabala      Sabala Rift
Of the many dimensions in the Yonderverse, Sabala is a dimension made of pure light. Because of how much energy is stored in the dimension, 3 billion years ago a tiny tear in space appeared. It appeared to be a small rift that led to Sabala, the rift causing light to leak out. This had immense effects on the surrounding space, as the light can be seen from unimaginable distances.

The Sabala Rift appeared about 3 billion years ago. Its appearance was noted by hundreds of space-travelling races, and was seen as a danger to all life. As the rift kept on growing, more light seeped out, but it wasn't the usual light people were used to.
Roughly 2.2 billion years ago, the first sighting of a giant serpent-like creature was documented. It was described as an infinitely long, goldish snake with a large head and long snout, and an extra snout on top of its head. Nobody believed this at the time because there was absolutely no evidence to support the claim.
That was until a billion years ago. The rift massively grew in size, abnormally so compared to its regular size increase. Emerging from this rift was a massive snake like creature that perfectly matched the description from 800 million years ago.
Since then, this creature known as the "Solar Serpent" has been spotted about 30 times, and it is assumed that it continually wakes up from a deep sleep inside Sabala. 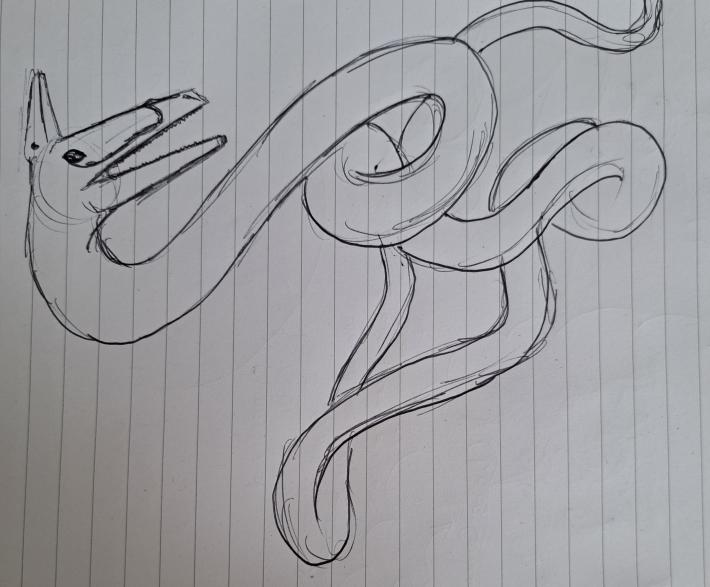 Placeholder by Mochi
The Solar Serpent has been spotted many times, so it's description is fairly detailed. The creature has glistening gold scales, a large head, two snouts - one where a snout usually goes and another directly on top of its head. The Solar Serpent's body is of an unknown length; many have theorised it might be endless. It is also unknown if it is the only one of its species.
Sabala