Yonderverse       Encyclopedia    Fauna & Flora    Fauna    Mammals      Rune Deer
Rune deer are a common herbivorous mammal from Maloruno. Rune deer are known for their psychic abilities, that they use to defend themselves against White Tigers, their main predator.

Rune deer have a very impressive anatomy. They have the typical physique of a deer, only stretched. Their necks stand twice as tall as their bodies are long, along with their impressively long legs. Their fur is short and stiff, a creamy brown with darker brown scruffy stripes.

Their heads are small, but on top are two monolithic antlers. These antlers, unlike most other animals in their family, don't shed. Between the antlers is a small, pinkish-purple levitating orb. It is said that the psychic powers of a rune deer hail from this orb, and if it is destroyed, the deer will be killed.

Rune deer mate just once a year, and each year with a different partner. Females are pregnant for 15 months, and they give birth standing up. Unlike the giraffes of Earth, rune deer use their psychic abilities to slowly land their baby on the ground, otherwise they would drop to the ground and potentially injure themselves.

Rune deer are a herbivorous species, consuming the various plant matter that grows on the tall maze pines. As the tallest species in the forests they inhabit, they are able to eat a large amount of food. They must eat up to 100 pounds of food a day to stay alive, and they spend most of their days eating. With their psychic abilities, they pull the leaves of the maze pines towards them to save energy.

Rune deer inhabit the maze forests on Maloruno. They have a large range, as maze forests spread over two thirds of the planet. They are about the same height as the maze pines, and can easily be seen wandering the forest.

The older a rune deer is, the stronger psychic abilities they have. As well, the orb above their heads continue to grow at a slow rate. Rune deer have shown various abilities, such as telepathy and telekinesis. The telepathy that rune deers exhibit are not what one would expect - they instead speak the same language of trumpets and screams that rune deers make normally, which Runos still cannot understand.

Elder, and therefore more experienced, deer display mediocre telekinesis. Simple moving of rocks and ground debris have been recorded, and on rare occasions, destroying of trees and boulders, as well as using telekinesis to defend themselves against white tigers. Rune deer are generally calm animals, and don't set out destroying things.

Rune deer are unfortunately preyed upon by many animals. Aside from their psychic powers and impressive kicking strength, they have no other defenses from predators. Their most common predator is the white tiger, a malicious mammal species that occupy the entirety of the Northern Hemisphere.

Because rune deer are three times the height of white tigers, their legs alone taller than them, white tigers have to outsmart the animals. They are an incredibly intelligent species, and know that they could be killed with just a kick from the deer to the face. Typically, white tigers will use their triple-split tails to grasp rocks and fling them at the deer's legs, bringing them down to the ground where they then target the orb floating above their heads, but if that fails then the tigers will climb the giant trees and pounce on them which is arguably more terrifying.

White tigers aren't the only species to hunt rune deer. Maze hawks are a gigantic bird of prey, with a wingspan of about thirty feet. Their wingspan alone rivals the height of a rune deer. With their aerial abilities, are able to fly down and break the orb above the rune deer's heads, the quickest method of killing them. Maze hawks then fly off with the rune deer corpse with its unparalelled strength to their nests atop noble maze pines, a rarer subspecies of maze pine that grow ten times the size.

Rune deer are hunted for their psychic orbs. Because rune deer die immediately after the orbs are taken or destroyed, the harvesting of the orbs are incredibly controversial. Hunters typically drive camouflaged off-road vehicles, so low to the ground that rune deers cannot spot them. They usually wrap rope around the deer's legs, pulling the massive creatures down to its knees, where hunters can climb up their necks and grab the orbs, ripping them out of their powerful grasp.

Rune deer have been featured in runo folklore and mythology for thousands of years. Their impressive height and abilities made for menacing mythical monsters. Stories told around raging campfires about rabid beasts, trampling entire settlements, made waves around the general population.

The stories of abnormally aggressive beasts is still believed, and is actually reinforced thanks to the discovery of ereberries. Ereberries are a rare type of plant that grows about half-way up a maze pine. Ereberries have hallucinogenic properties, and causes uncontrolled rage in whatever eats it. People now believe that these stories are true, rather than horror stories designed to scare.

A group of rune deer are known as a herd, and herds can be anywhere from a ten to a hundred individuals. These herds are tight-knit, and it is rare for a herd to introduce a new member that has no familial connections. Herds contain up to 4 families in them, and the deer will mate with another from a different herd, yet still remain in its own herd.

Like many herd animals, rune deer herds are led by females. They have a strict hierarchy, with every female at a higher rank than males. The alpha female is the strongest rune deer and is in charge of the actions of every other member of the herd. Adult females, as long as they are in a healthy condition, are just below the ranking. Below them are elder females, with adolescent females and males just below.

The alpha male is a ranking in its own right, and is the strongest male. He is in charge of the other males aside from adolescent males, yet must oblige to the alpha female's rules or else he will be replaced and kicked out of the herd. It is still uncertain what the purpose of the herd's hierarchy is, other than keeping the deer in line. 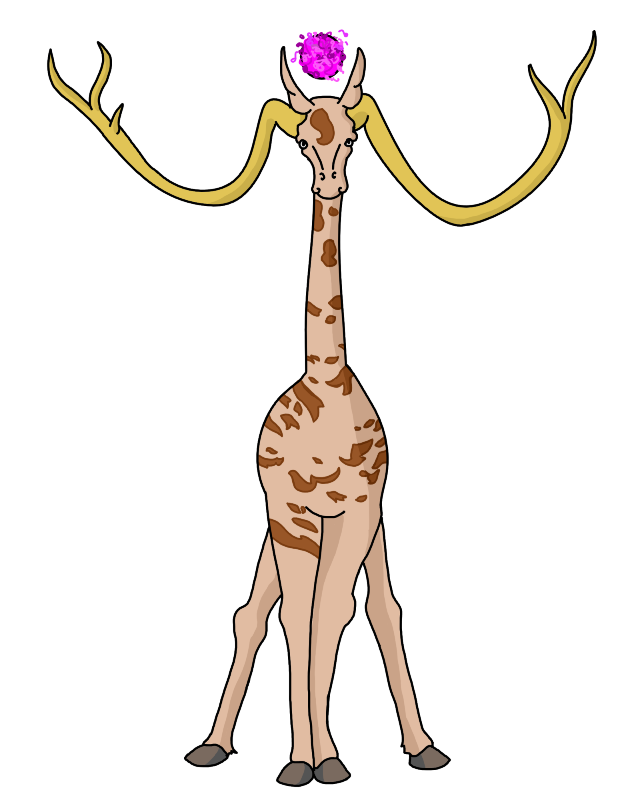 An apex predator from Maloruno. White tigers are known to be incredibly powerful, skilled hunters, showing absolutely no mercy.

The sixth planet in the Ria Solar System. Home to the runos and white tigers, who dominate the southern and northern hemispheres respectively.

I didn't think about that! They probably do! Thank you for bringing it to my attention :D

I really appreciate the addition of the art! Such long fellas!

Oh no, poor rune deer! D:   I love that they use their psychic abilities to gently lower their babies to the ground. Watching giraffes give birth is terrifying. XD

Thank you so much! I felt bad for giraffes so I had to make it a bit easier for rune deers xD

Very cool species. Smart of all the predators to attack those orbs. I wonder how they defend against the birds. Do they use their psychic powers to throw rocks at them as I can image them being the most difficult to defend against.

Thank you for liking and commenting! I suppose they do! It might be difficult for younger rune deers as they don't have much power, but adult ones probably could!

This is super cool. It totally subverted my expectations too. I was imagining a glowing deer with rune like markings on their pelt. Not a massive giraffe like creature with psychic powers. I think this is far cooler than just a simple recolored deer and I quite enjoyed the subversion of expectations. What are the harvested orbs used for? Has their use changed over time?

Thank you so much! Glad I was able to subvert and exceed your expectations! As for the questions I'm not too sure, I'm still working on developing runo culture so I probably won't have a good answer for a while :P

That's an awesome article and I now picture a herd of rune deer sticking just above the maze pines with their huge antlers.   In some way, it reminds me of the Nightwalker from Mononoke Hime. More in being magical, enormous and normally an astounding stag. I'm curious about the antlers. In typical deer, these would grow on males and be dropped each year. What is the case for Rune Deer? And are they as valuable as the orbs but in a different way? Also, if the females form the higher section of the hierarchy, this could suggest they are superior to males. I kinda miss that information. Are they bigger, stronger, show more powerful psychic abilities?   At one point you mentioned Runos. These are the inhabitants of Maloruno? A tooltip would be nice for that.     Thank you for a nice chunk of read for the morning! :D