The first planet orbiting Ria is Uriti. This planet consists entirely of rock, magma and lava, and large volcanoes that erupt almost constantly. The planet is largely inhabitable, except for a few creatures that can withstand the temperatures. The rocky landscape is carved with lava lakes and rivers, mountains are coated in lava and their waterfalls provide a deadly but gorgeous landscape. There is almost a complete lack of plant life, except for a few species that can survive the temperature and feed from the water vapour released by volcanoes as well as the mineral rich ground.

Greenerth is by far the most inhabited planet in Ria, and maybe the entire Yonderverse. The planet contains five continents, all with relatively different climates and temperatures, and are home to an abundance of biomes such as the deserts and savannas in the Region of Sarra, the frozen plains and mountains of The Frost Lands, the tropical rainforests of Tropacia, and the cool temperate forests of Aekor. The variety in environments means that tons of races have found a way of life on the planet, including but not limited to Harmonids that have labelled most locations on the planet, including the countries and continents themselves.

Like Talerin and Ocearia, Dracosei is made of a lot of oceans. However most creatures live on land, on the only continent Etrea and the hundreds of thousands of islands that sprinkle the planet. These islands are all vastly different in climates, temperatures, and terrains; Red Rock Island is a very hot island, with several volcanoes and a unique type of stone that lines the beaches and burn when stepped on, and Botanic Bogs is a very muggy island chain with a lot of plant life. The main continent of Etrea is full of biomes, each corner different to the other, which means that a lot of dragon species and plant species live on Etrea as well as some of the only sapient races.

Talerin has a cool climate compared to Uriti, but still the planet is largely desertified. Talerin is mostly an ocean planet that is completely uninhabitable because of the Striders of the Deep, but the single island continent that exists is uninhabitable because of the temperature. The dangerous climates means that few species exist, and they all fight for survival. Most of the continent is a large desert, with savannas and the occasional mountain range, as well as some tropical rainforests. But the plant and animal life has made it impossible for people to live in, and so the Ukari People, the only race to live on Talerin, is forced into a limited sized city called Tak'are just west of the Dry Reef.

Ocearia is the fourth planet, and like Talerin, is mostly made of oceans. Apart from a few small islands dotted about the planet, Ocearia is dominated by oceans and seas. The regions on the planet are divided based on biomes, including blood rivers, kelp forests, shallow sands, and thermal spires. The planet has the deepest oceans in Ria, the deepest is 29,380 metres deep in a ravine in the southern hemisphere of the planet.

Maloruno is a mostly forest-covered planet with several continents, countries, and a stable population of Runos, the dominating race on the planet. The continents are all temperate and boreal forests, with many mountain ranges and valleys in the north and south hemisphere.
The large population of white tigers in the northern hemisphere has left no room for runos to live there, so runos dominate the southern hemisphere.

Cavotov is the seventh and final planet to orbit Ria. It is a cold planet, and so most animal and plant life exists underground in large cave networks. The planet on the outside is covered in oceans and continents, both of which are layered with snow and ice. Large ice paths connects the continents which means migration of some species is rather easy.
The cave systems on the planet are full of life, much more than the surface, and are home to an abundance of plant species. The cave systems all open up into large corridors and spaces that are sometimes miles wide; it is a wonder how the ceiling hasn't crashed down with almost no support.

Yathera is a dwarf planet that orbits Nasara between Ocearia and Dracosei. It cannot support much life, yet it still finds a way. No sapient races call this place home, but a select group of reptiles live on the dwarf planet called runners. The whole planet itself is quite warm, with a mostly desert environment it has a small landlocked ocean with some plant life.

Vipheanus is a dwarf planet that orbits Nasara between Talerin and Greenerth. The lush climate on the dwarf planet provides beautiful tropical rainforests, vibrant oceans; it is one of the most popular dwarf planets to stay on as major holiday resorts have built on it and people across the Yonderverse can stay here.
It is also home to a lot of creatures, from the mangrove rottler to the ornament fish, there is no shortage of brightly coloured creatures and plants.

Aiamaia orbits Nasara after Cavotov, and is quite a cold dwarf planet. It is home to the terrestrial tusklin species. The planet is mostly snow and ice, with a thick layer of permafrost covering the entire dwarf planet. It has no sapient races, and few flora species.

UV, short for Ultra-Violent, is the largest dwarf planet in the Ria Solar System. It orbits Nasara after Aiamaia, and is the coldest dwarf planet. The planet got the name "Ultra-Violent" after its inhabiting species, the Onara. They have taken over the dwarf planet and have scared off every single spaceship that has set foot on it, even destroying some and using the parts as weapons.

Ria is one of the most bustling Solar Systems in the entire Yonderverse. Because of the constant visits from people from other planets and Solar Systems, special routes have been cast from planet to planet, from entrances into the Solar System from outer regions. One follows special pathways guided by flittering lights that will guide you to different planets, in the hopes of preventing the entirety of space being too clustered.   Greenerth is the most popular location for tourists, as people from so many planets in different Solar Systems are attracted to the beautiful sights and bustling cities, they don't feel so isolated when they go on holidays as there are always people to talk to. Talerin is a surprisingly popular planet for tourists, as the largely uninhabitable continent attracts millions of tourists a year. The city of Tak'are is so popular that they had to build a special spaceport just to funnel in the spacecrafts; previously they had no regard for property and would land literally anywhere, even on top of random houses.

Outside of the planets, there are quite a few creatures who live on the various dwarf planets, A-planets, asteroids and other objects. One of the most abundant creatures are cyclops tadpoles who live in large puddles and lakes on A-planets. There is an estimated population of about 160 billion. As well as cyclops tadpoles, godrills, shorps, and pitter snakes live on the A-planets and asteroids that orbit Nasara.   In space itself, a stable population of severins has been recorded, which migrate from around Dracosei to Cavatov when they get too warm. Using specialist telescopes they are tracked from various planets as they migrate around the Solar System, and graphs of their travels have been presented which show where they go and for how long they remain at those locations.

Ria holds one of the largest deposits of laurelite, a rare and valuable crystal that is found as dust in space. Two deposits are located on Dracosei and Greenerth, one under Sanra Forest on Greenerth, and one under Kazaharo Cliffs on Dracosei. These deposits are some of the only ones found in the Yonderverse, and have caused a unique meteorological weather phenomena known as glaze storms. 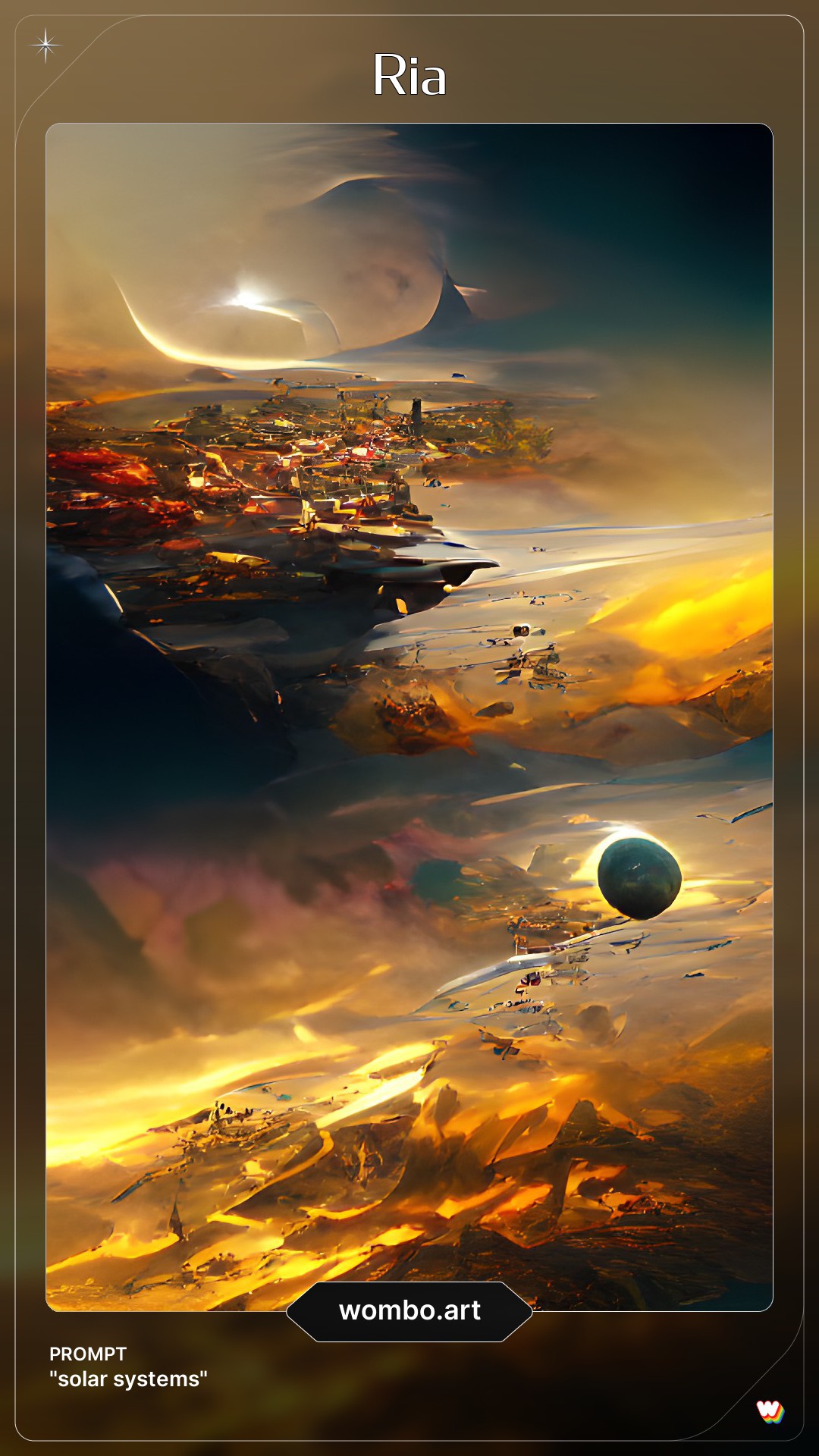 The first planet in the Ria Solar System, Uriti is home to the Uritians and the Calhans. The planet has achieved space technology, and is no stranger to venturing beyond their solar system.

A planet in the Ria Solar System. The only sapient species is the Ukari People, who closed themselves off in a city named Tak'are.

A planet in the Ria Solar System.

A planet in the Ria Solar System.

A planet in the Ria Solar System. Dracosei is inhabited by hundreds of dragon species.

The sixth planet in the Ria Solar System. Home to the runos and white tigers, who dominate the southern and northern hemispheres respectively.

A planet in the Ria Solar System. Most of the fauna and flora on the planet exists

Out of curiosity, given the age-difference between the planets, any sapient species that have wiped out since?

I'm sure there would be a lot, and in fact centaurs are an extinct sapient species however that was due to them losing a war. I know I'll make a few extinct races on some planets and dwarf planets. Thank you for liking!