Yonderverse    Space    Atlas    Natural Objects      Crystal Minefield
Located just a few trillion megaparsecs away from Aavar's River, the crystal minefield is one of the most grand locations in the Yonderverse. The beings living here are the same size as any regular star in a galaxy, and they spend their entire lives mindlessly mining away at the crystals, as part of one massive hivemind.
Included Locations

The crystal minefield is comprised of crystals gigaparsecs tall, forming almost infinitely tall sheets of colourful rock simply floating in space. The reason for it being called a minefield is not because it is mined by giant beings, but because of the crystal's tendencies to explode. Any loud noise and the crystals will vibrate, causing massive explosions, the noise causing more and more crystals to explode.

Chaoslings are the mindless husks of workers who mine away at the crystals in order to feed the Chaos Queen. These four armed, six legged beasts are the size of an average star. Their skin is coated with acid to protect themselves from the infinitely hot crystals, which get delivered straight to the Chaos Queen. 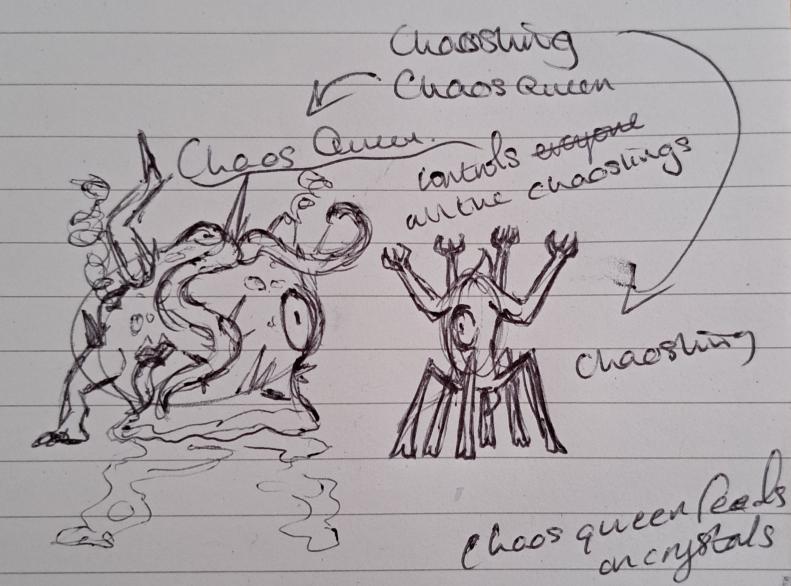 For some unexplained, bizarre reason, a group of chaoslings were given a soul. It is assumed that some god gifted them souls, but nobody really knows. Now with thoughts and emotions, about a million chaoslings fled the mines where they were working and revolted against the Chaos Queen. Because of how few chaoslings fled, she did not care and replaced them instantly.   The chaoslings fled to an undisturbed part of the crystal minefield, and hollowed out a large crystal that they now call home. They created long, winding pathways out of stardust that wraps all around the crystal, and leads to every entrance into the city. The city is incredibly minimalistic, only having access to a handful of resources, but the chaoslings believe it is a better life than the one they previously lived.

There is not much to tell for the crystal minefield's history, as the only significant things that have occurred was the arrival of the Chaos Queen and the chaosling revolt.   The Chaos Queen arrived soon after the crystal minefield was created, at the very beginning of the Yonderverse itself. Those who know of the Chaos Queen's existence believe that she was created by demons from the Horror Dimension, as her personality and appearance fit that dimension incredibly well. Once she arrived, she immediately started creating her minions as she was too lazy to eat the crystals herself, and wanted these chaoslings to feed her.
Thirteen billion years later the chaosling revolt occurred.

The only chaosling settlement, on the edge of the Crystal Minefield.