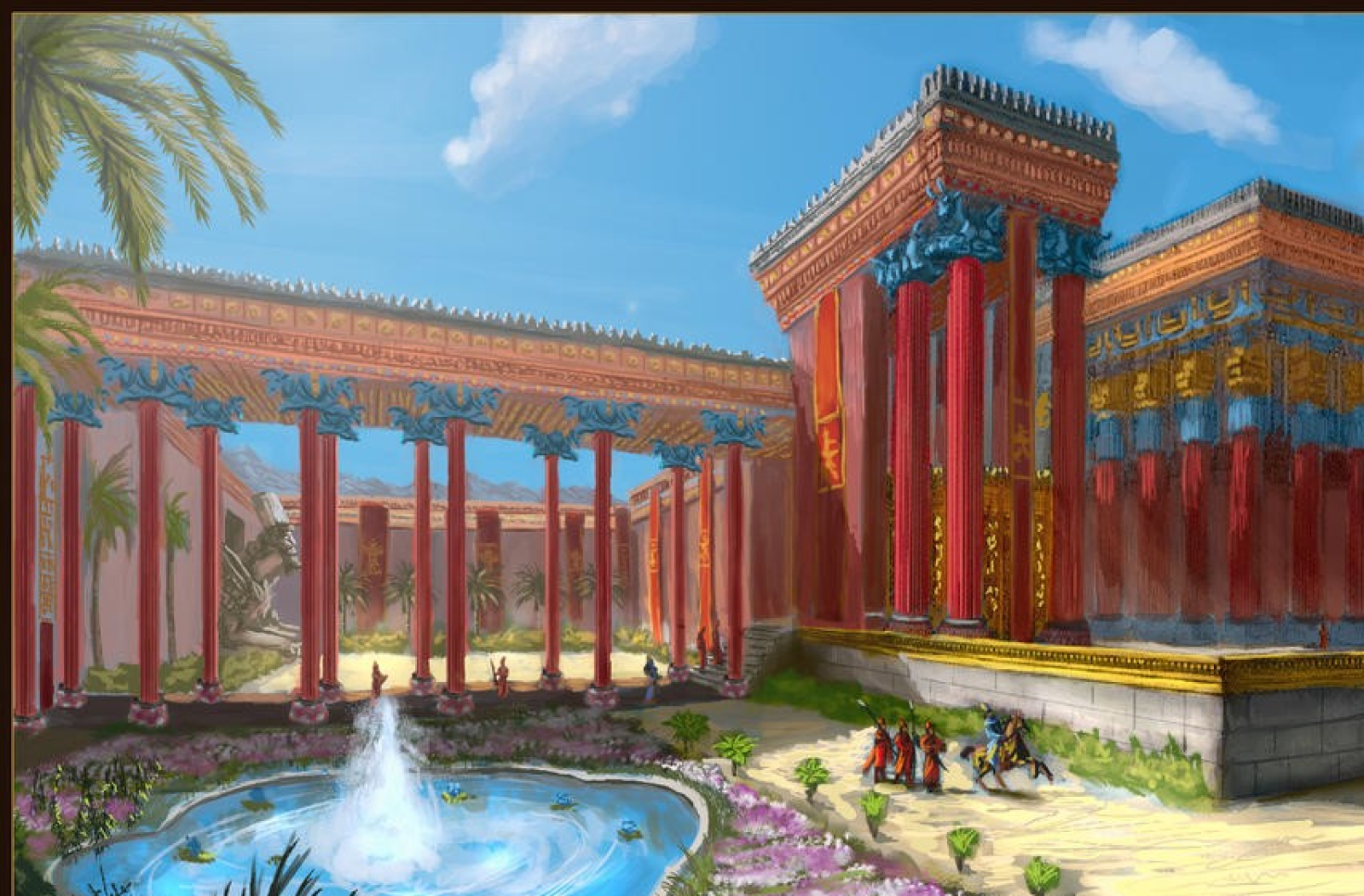 The Palace of the Thousand Columns

There is no other palace more beautiful in all Karia, due to its architecture, its materials and its gardens, than the Summer residence of the Seris Emperor. Its columns are made of porphyry, with capitals covered in gold depicting animals, and its roofs are covered in gold too. In their vast gardens you can find almost every plant and tree known in the world.   Each year, at the end of the 5th month, the emperor enters the palace in an splendorous procession , and rules the country from there until December. And it is also there where he receives the homage from the vassal rulers of the Empire; the King of the Nomads ( The Farai Nomads), the High Priest of Lashel, the King of the Sun elves, and the monarchs of the Naris.
— Macarius of Morya, Ikarian ambassador to the Seris Empire in 367 AP.

Asurlan I conquests had brought immense wealth to the already rich Seris Empire , among them the golden treasures of the Sun Elves and Menarites. With them the Seris Emperor financed the construction of a new and grandiose palace that would be the envy of any monarch in Karia.     The palace was design according to the Emperor’s wishes by the famous architect Ściryekaum Totkaru. Asurlan wanted its palace not only to represent the majesty and power of his realm but he also wanted to include elements from the lands he conquered or submit as tributaries. So Sciryekaum included in his design, gardens inspired by those at Ymhilean , great stairs leading to the throne room, decorated with the Emperor making a sacrifice to Abina and behind him the subjugating peoples paying tribute to the Seris Emperor, inspired by those at the temples in Orhad and Aphyr, today lost cities in Nythia. A temple dedicated to the goddess Youri ( as Pyra is known to the Seris), the divine ancestor of the Seris Imperial family was also built.   Behind the throne room, designed as a great room surrounded by thousands of columns (thus giving its name to the Palace), were located the Royal Bedrooms and also the Emperor’s Office where he would discuss the empire’s policies and laws with the closest members of his Council. East of the Throne room hall was a little library where also the Imperial exams took place, and next to it was the "Royal Observatory" and the "Academy”; quite prestigious buildings at that time, that attracted scientists from many foreign realms. North of the Throne Room were the different chambers of the Ministers and the Councillors and also the baths and Imperial Stables. Finally, in the nearby hill, connected to the palace via a great avenue lied the fortress where the Imperial Guard was located.

Constructions began in 271, thousands of peasants were recruited for the building of the palace. Most of them came from the nearby regions, and were mostly peasants who wanted a bit of extra money. The throne room and the main rooms of the ministers were finished in 281. The gardens and the Imperial Guard Barracks were finished in 287 and the last constructions added were the great baths and the stables, in 290 AP. In total, the palace had 450 rooms, 25 fountains, a big throne room, 7 gardens, a library a great bath, and 2 temples (another one, dedicated to Abina, was added later in 419AP by emperor Vima IV)


Rise and fall of the Palace of the Thousand Columns

The Palace continued to be the residence of the Emperors of the Sittakid Dinasty from Asurlan I till almost the end of the Dynasty. It maintained its splendour well until the late 5th century. In 491, the Sittakid dynasty was in steady decline. Corrupt officials ruled the court and the fall of the Ikarian Empire, almost 30 years later, disrupted the lucrative trade with the West for a while. In 478 AP a rebellion in Adhel expelled the last Seris viceroy putting an end to 203 years of nominal seris rule ( as the Seris Emperor was also the king of Adhel), although Adhel would became again a tributary of the Empire in 495AP thanks to the campaigns of Mithradates I. 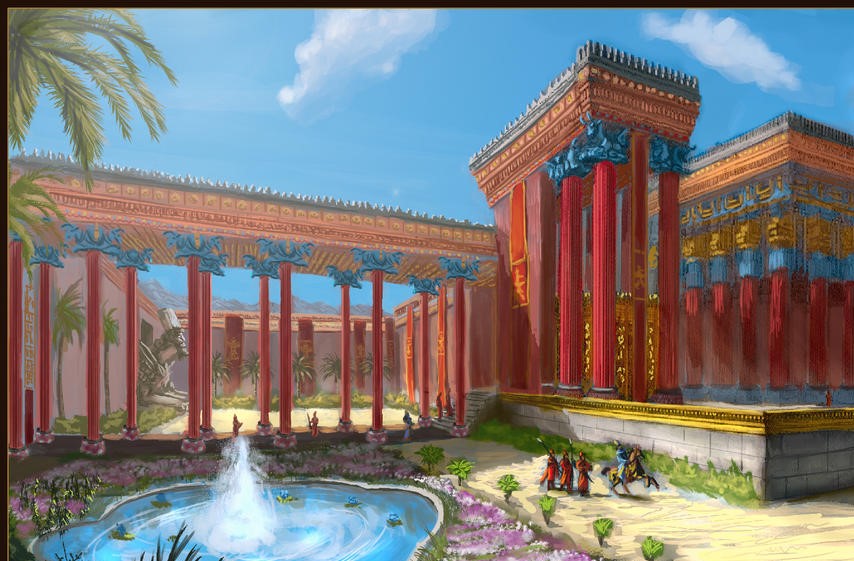 Palace of the Thousand Colums by IRCSS
Also bad harvests have happened in the late 480s that led to famine and unrest among the peasantry. This situation, both internally and externally led to the " Revolt of the five commanders" in 493 AP. Sitak , governor of the Elven provinces, Orashi, governor of Lizarash, Yüttak, governor of Eshan (the future Yüttak VIII) Kaum, governor of Bezan and the Protector of the East, Heran, attempted a coup to purge the ministers and proclaim the cousin of the current Emperor Mithradates I, Visuparad, as Emperor. They marched north and reached the Palace of the Thousand Columns in 495 AP and burned it to the ground. The reason remains unclear, some believe they sacked and destroy it because they needed the gold to pay their troops, others, that they stormed that palace thinking that they would encounter the Emperor here ( which was not true as the Emperor was in Sakouramish visiting a sicked friend).

Burning of the Palace by IRCSS
But still, nothing, aside from the porfiry columns and the empty temples remained of the palace. The statues were said to be melted for paying the soldiers as well as the golden capitals of the columns and the throne. Despite their advances, the rebels where defeated by Mithradates I and, aside from Yüttak who fled to the realm of the Faray Nomads, all the leaders of the revolt were killed. And after the ascension of the Yüttakid dynasty to power in 527 AP, no efforts were made in rebuilding the destroyed palace and what remained of it was left to ruin. Today the place is known as the King's towers.

Not only the famous golden statues and gardens were destroyed, but the great Academy and the Observatory were destroyed and more than 60% of the works of famous scientists stored there were burned. The rest, thankfully, had already been copied and stored at the temple of Alara in Sakouramish . So it was a great tragedy for human culture and knowledge. With this loss, the Seris Empire ceased to be the leading human realm in science and technology, a place that was quickly occupied by the Blatian Empire and its greatest library at Blati, built only 40 years after the burning of the Palace.

A bee perches on some flowers, with little steps inside them she wanders,  She is like me, she has found paradise, at the seat of the monarch with infinte powers.
— Poem of Asurlan I, composed ca. 294 AP.

Answering: "A lost or discovered monument."
Visit Callyxtus's Competition Page Check all other answers to this prompt Competition Homepage

Reminds me of the Lost City of Iram & the Library of Alexandria that one. Nice work.

Hi Colonel! thank you for commenting on my article!. I didn't know about the city of Iram, but now I've learned about it and its a quite interesting story. And yeah the burning of the library was totally inspired by the Alexandrian one. I'm glad that you like it!!

Aye it is a good article. Glad to have read it.