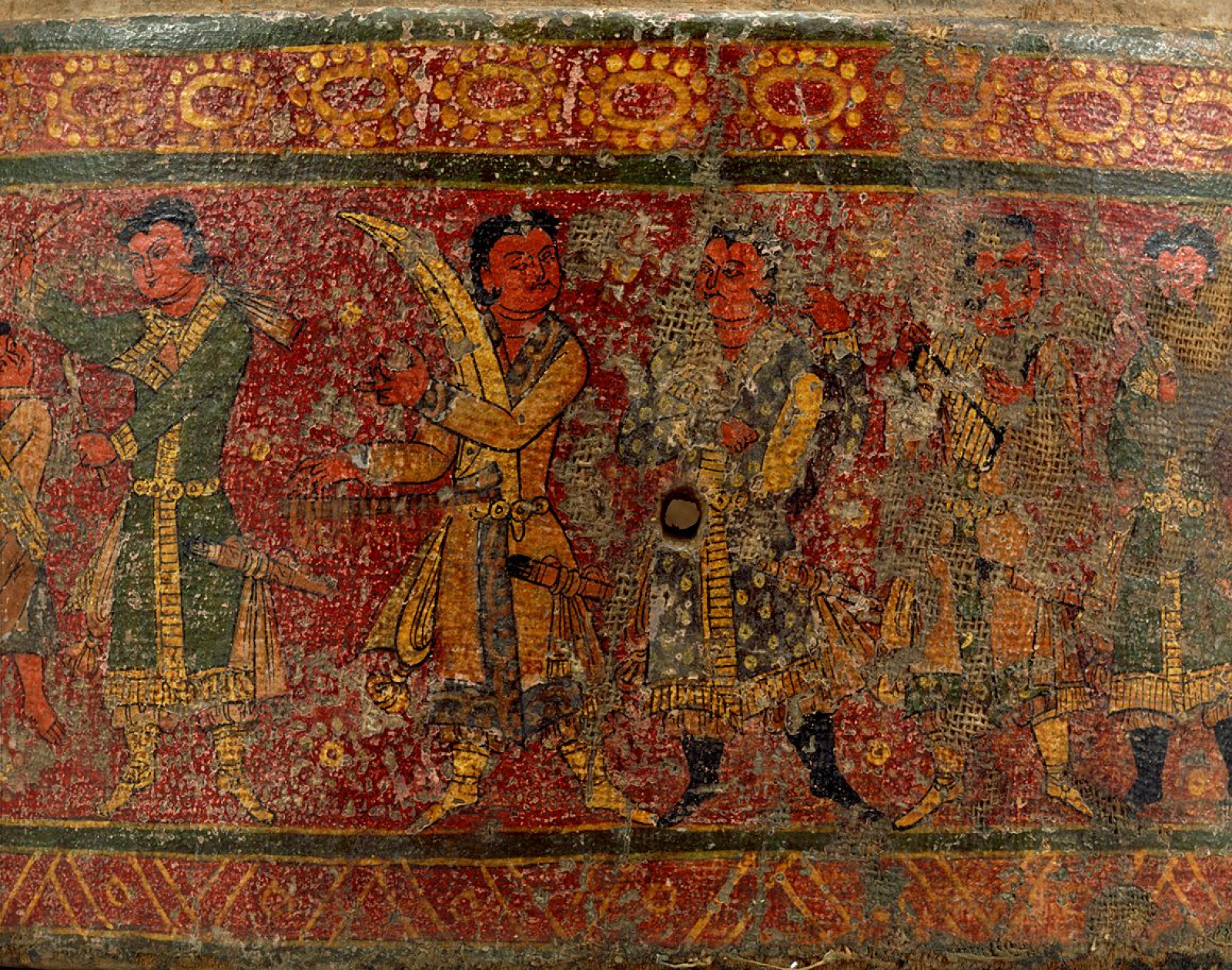 Seris Festival of the Moon Goddess

Then, no mather if it rains or it is hot, a group of dancers disguised  as rabbits, bears, cats, dogs, birds... as past heroes of the Seris..., all beautifully dressed, almost like kings makes their way through the main street, dancing  and making fun of the viewers or simulated little fights between the animals. And the people of the city seemed to enjoy this entertainment very much.
Then came the statue of the goddess accompanied by musicians, also dressed in lavish clothes playing a variety of instruments like harps, drums, flutes, and every citizen present at the procession bowed as the statue passed by, dress in beautiful white garments,as this is the color of the moon, and the Seris have such reverence to the goddess of the moon, that they considered white almost like a sacred color.    Mauricius Peditianus, Ikarian traveller and ambassador, ca. 258 AP


Oh Sek, beautiful and shinny goddess, Queen of the Skies, whom is most reviered by the Seris people, we ask you for your blessing and protection. That through your divine powers our realm, our people and our Emperor shall be safe and prosprerous. And following your example, we could give light where is darkness. Make also the sea calm, oh you mighty goddess, as it is because your might that the sea moves , make our sailors and merchants travel safely to these our waters in order to bring wealth to this nation.
Oh mighty and  gorgeous dancer, now in your honor and after delivering to you these gifts so carefully and humbly presented to you by your faithful servants , we should dance around your home (your temple) to please you and to ask for your divine intervention

Prayer recited by the 10 maidens.

The origins of this festival are shrowded in myth, it is said that it performed each year in king Davidion's palace, and that his son, Kushi, the first Seris king, ordered this festival to be celebrated in the first Seris city in the continent of Karia, when they arrived crossing the Suris Strait.
For millenia each city celebrated this festival but it wasn't until the unification of the Seris and the birth of the Seris Empire, that the ceremony became standarized and performed each year during the first full moon after the Spring Equinox at the imperial capital, Sakouramish .

At first the ceremony was very simple; a procession of the 10 maidens of the Moon goddess Sek, accompanied by some musicians and carrying gifts to the goddess in form of fruits, necklaces made with pearls, entered the city through the Southern Gate heading to the temple of the goddess located in one of the courtyards of the Imperial Palace, there they were recieved by the Seris Emperor and together they offered libations to the goddess and the maidens offered their gifts and danced around the temple until finally reciting a prayer asking the moon goddess for the protection of the city and the Empire.

Around the 1st century BP the ceremony has transformed a bit from its ancient form. Now, apart from the procession of the maidens and the musicians a group of citizens were selected each year to dress as animals and mythological figures, either gods or heroes of the past. They wore elaborate robes made of silk and beautiful masks. Their main role was to accompany the procession dancing through the main avenue of the city entertaining the hundreds of thousands of people that went on to see the parade. According to tradition, if the day was hot, one of their roles was to trow water at the public for fun (and also as a reminder that spring had arrived and the days were getting hotter).

There was also another difference with the ancient ritual, now the statue of the goddess that usually is located at the temple was transported outside the city and then parading through the main avenue heading to her temple (simbolizing the entrance of the goddess as protector of the city and the empire). Then the statue together with the musicians and the maidens is recieved by the Emperor at the entrance of the palace, and according to tradition, he bows 3 times ( this is quite significant as the Emperor only vows to the gods and to no one else) and then the rest of the ceremony inside the palace is performed as described before.

Aside for the aforementioned entry of the goddess statue through the Southern Gate the main symbolism of the ceremony resides on the rituals done in the Imperial Palace. The Emperor is the one designated to  put incense at the bottom of the statue  because of its role as High Priest of the Seris religion and because its him who in theory is asking the goddess, in the name of his subjects, for protection.    Then the prayers and the dancing of the maidens are realised to please the goddess who is said to have been also a wonderful dancer, and every banquet the gods hold she is the first to dance and amuse the rest of the dieties.    After this ceremony has been completed, the city burst with life and celebrations during the night . Bonfires are stablished in the main streets and squares of the imperial capital and around there, people drink, sing, listen to bards and musicians all under the wonderful light of the full moon. Meanwhile another more "elaborated" banquet  is held in the imperial palace where the emperor, the imperial family and the main dignataries and aristocrats of the Empire eat, drink, listen to poetry, watch theatrical plays and dance also under the night sky with the omnipresent, full moon.

The main tools used in the ceremony are of course the statue of the goddess, which is covered by a pallium . Then incense is used across the main street each time the statue moves by and also once the statue is placed on its temple again.    Then of course there are the musical instruments as music is a key part in this festival, both in the religious procession and then also at night when bards and musicians can be found in the main streets and squares of Sakouramish  either singing epic tales or poems or playing music for entertaining the people.

Everyone can assist to the procession and even recite prayers and ask for favours to the statue of the goddess. But the main participants of the ceremony are the 10 maidens of the moon goddess who  carry the gifts to the goddess.     But perhaps the dancers disguised as animals and legendary heroes are the most colourful element of the whole procession.   As for the maidens, this 10 young ladies are selected among the most beautiful girls in the city, aged between 16-25, they held the position of maidens of the Goddess usually until the get married and their main role is to custody the temple of the goddess, perform the sacred rituals and collect the offerings that the common people give to the goddess. Their main distinguish feature is their hair dyed white, as it is the color of purity and of the moon.

Acording to the Seris calendar the festival should be celebrated the first full moon after the Spring Equinox, so the date changes each year. There is an special commitee of sages and astronomers that establish the exact date.
Primary Related Location
Sakouramish

Answering: "a festival associated with a celestial body"
Visit Callyxtus's Competition Page Check all other answers to this prompt Competition Homepage

Nice article! The procession with all the people dressed like animals sounds interesting and must be fun to see. It was also quite interesting to see that the emperor does bow during for the gods even though he normally never bows.

Thank you!!!. I'm glad that you like it, the procession of the animals is almost like a "carnival". And the fact that the Seris Emperor bows 3 times in front of the statue of the goddess, as you say is very interesting and significant. The reason why he does this is because he is the representative of the goddess, the Chosen one by the gods to rule over the world ( or that whats the seris believe), so his power cames from the gods, they are the ones who are above him, no one else. So its both a sign of devotion and respect towards the gods, as "supreme rulers" of the world.