One of the oldest if not the oldest realms in Yeia that has survived into the present time. Founded at the zenit of the Bronze Age . Nowadays is the most powerfull and prestigious elven realm in the world. Because of its enormous wealth due to the trade routes and caravans that travel across its territory, the Sun elven kings have not only an imposing army but also have comisioned great works of art and hired some of the best elven scientists and writers for their courts.   Alongside the fertile margins of its rivers and oasis many towns and cities thrive thanks to agriculture. The rest of the country is mainly desert and the home of the Desert Elves, better known as the Sand Lords, a sub-race of the Sun Elves that have adapted to desert live, wondering around the country, from oasis to oasis trading their goods.
Kingdom of Unhelion
Open full size


The kingdom of Unhelion's goverment form is an elective monarchy in which the King is elected among a list of 5 candidates belonging to the 5 most important families of the Kingdom.
The country is divided into regions (Twadyn) each one ruled by a Petty King or Wise Man, as the elvish called them. They ruled this regions for life and its not unusual for powerful local families to monopolize the rulership of these areas. These Wise men form the High Council of Unhelion, that helps the king ruling the country and enforce the law across the realm, but also is the council responsable of electing the new king.
In total there are 14 regions: Spearhead, the Royal Land, Sunlake, Wetlands, Iron Fortress, the Chain, Sun Mountains and the Valley of the Kings. and also, each leader of the Sun Lord tribes ( 6 in total as each tribe, due to its nomadism is considered a region itself).

We, the sons of the dunes, bend the knee to no one but to the one chosen by the people, the reflection of the light of the Sun, our lord the King. (Oath of the desert elf kings to the King of Unhellion)

The positions of the court on the other side are not chosen by the High Council (although its members can be elected to court positions) but by the King. The most important positions are:


The ethnic group that we know today as the Sun elves (and inside them the Sand Lords too) is formed by two groups:

First, there are the Anthineryn (newcommers): They are the descendants of elven groups that migrated from Karia's Southern Regions in an unknown date around the Middle Bronze Age, due to either the expansion of the first humans, climate change or preasure from the Dark Elves and that intermarried with the indigenous elven tribes that already lived in the region we know as Unhellion. They often display fair skin and blonde or light brown hair. Most of them live in the cities and nearby lands and also they are the group that gave birth to the Sand Lords. (They are also believed to have been the responsables for the introduction of the  Classical Elven language into Unhellion, that would eventually become the only elven dialect spoken in the region, and the origin of the modern Sun elf dialect). 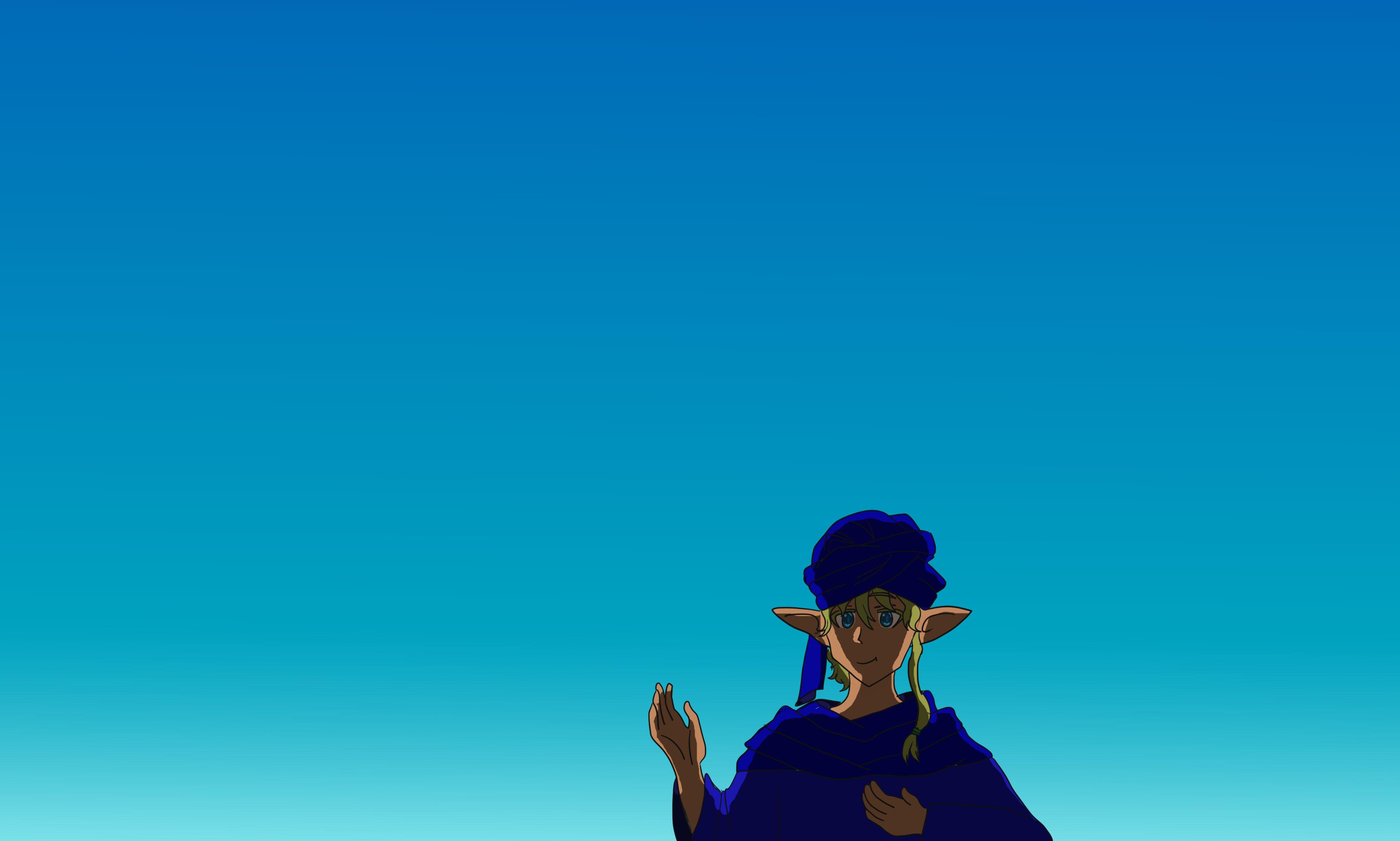 Desert Elf (also know as Sand Lord, dressed on their traditional clothes) . Art by me.   Secondly we have the Batheryn (meaning indigenous) or Theys Anerion (people from the land). They are the descendants of the first elven tribes that settled the region "in the beggining of time" as they like to say. Their fashion is slightly different that the Anthineryn and have some unique traditions. They also have some degree of Anthineryn blood since both groups intermingled very often. They have more darker skin and hair than the Anthineryn and most of them live in the countryside and specially in the eastern regions known as the Wetlands.

Sun Elves are considered as one of the proudest elven races but also as the most welcoming to foreigners that came in peace to their lands. A common custom among the Sun elves is to welcome a visitor into their homes offering him drink (usually tea or coffee) and food. Sun elves have an special tea and coffee ceremony for such ocasions as a sign of respect and friendship to their guests. Sun elves expect that if they visited the house of their guests in the future they will be treated with the same respect and friendship.

One of the things Sun elves are famous for is their pasion for music. Bards are really important in their society as they are the keepers of the traditions of the ancestors and remind the people about the deeds of the elves and their relation with the gods. Each city and each lord has a bard to tell with their beautiful voice and harp stories about battles, love, adventures, monsters or lives of Wise men, and also dance pavilions, specially at the palaces of the aristocracy where dancing festivals are held during religious festivals or other occasions such as the birth of a child, a wedding or a birthday.

As famous as its pasion for music is also its love for spending nights in the desert. This is a very old tradition that was spread among the aristocracy and then to the common people. The first books about astronomy and about relaxation and their properties written by the Sun elves mentioned the benefits of spending the night in the desert. When summer arrives many families travel a couple of miles from their homes to spend the night on tents watching the sky full of endless stars, comets and planets "stablishing a conection between them and the gods" as one famous text says.

As it has been said, Sun elves are considered as the most cultured of the elves. Most of them have notions of magic superior to other elven races and certainly, the best elven sorcerers come from Unhellion. There is no home in the Kingdom of the Sun Elves that doesn't have a little private library and its not unusual to see people reading in the balconies of their homes in the shadow during spring or summer.


As many other societies, human and elven, Sun elf society is divided into classes.   One thing that shall be noticed is that these categories doesn't apply to the Sand Lords, for whom there are only 4 categories: The leader's family, the friends of the king (the aristocracy), the priesthood and the rest of the people known as "the followers".

The Power of the Sun


"May the Light of the sun shines upon you" Common greeting among the Sun elves
Sun elves have basically the same faith than the other elven groups, but they worship the Sun god with special devotion due to the fact that their magic comes from the light of the Sun. Its through its power that the Sun elves can use magic to protect their homes or create magical creatures like the Ilidari, the protectors of children and families and also Unhellion's national animal.   Temples are built in honor of the Sun where its light passes through the windows and its stored in magical scepters. People go there to make offerings or pray so that through their prayers the Sun will continue to shine high in the sky and protect the elves giving them their powers. The high Priest of the Sun God is the King of Unhellion, considered the reflection of the light of the Sun (because of their luxurious garments covered with precious stones and pearls that reflect the light of the Sun).
Founding Date
ca. 3500 BP
Type
Geopolitical, Kingdom
Alternative Names
Kingdom of the Sun elves
Demonym
Sun elf
Government System
Monarchy, Elective
Power Structure
Confederation
Economic System
Traditional
Official Languages

Relations with their neighbours:


Being such a great nation in extension, Unhellion has a lot of neighbours, almost all of them human realms with either good relations with them or the opposite. This is the case with the human realms to the North, extremely xenophobic with elves and worry of their magic potential. Despite their succesfull defense of their homeland, the humans from the north are a force to be reckoned with; as well as the Seris Empire, until now the only human realm that has defeated the sun elves in open battle. But that was more that 400 years ago and now relations between Karia's  two strongest powers is very peaceful and cordial. The Narin peoples to the east of Unhellion and the Desert peoples to the south have had very peaceful and friendly relations with the Sun Elves. Sun elves are also very curious about half elves, as they are almost nonexistant in their kingdom, so the idea of a half elf kingdom as it happens in the continent of Teria is very exotic to them. They had the opportunity of witness the half elves from the kingdoms of  Brire  and Stormitia (and fight alongside them), almost a century ago during the Wall of the Great Call.

Remove these ads. Join the Worldbuilders Guild
Realms of Yeia

This is a gem to find! I can't believe more people haven't seen this yet. It's so relaxing, and the art is beautiful! :O