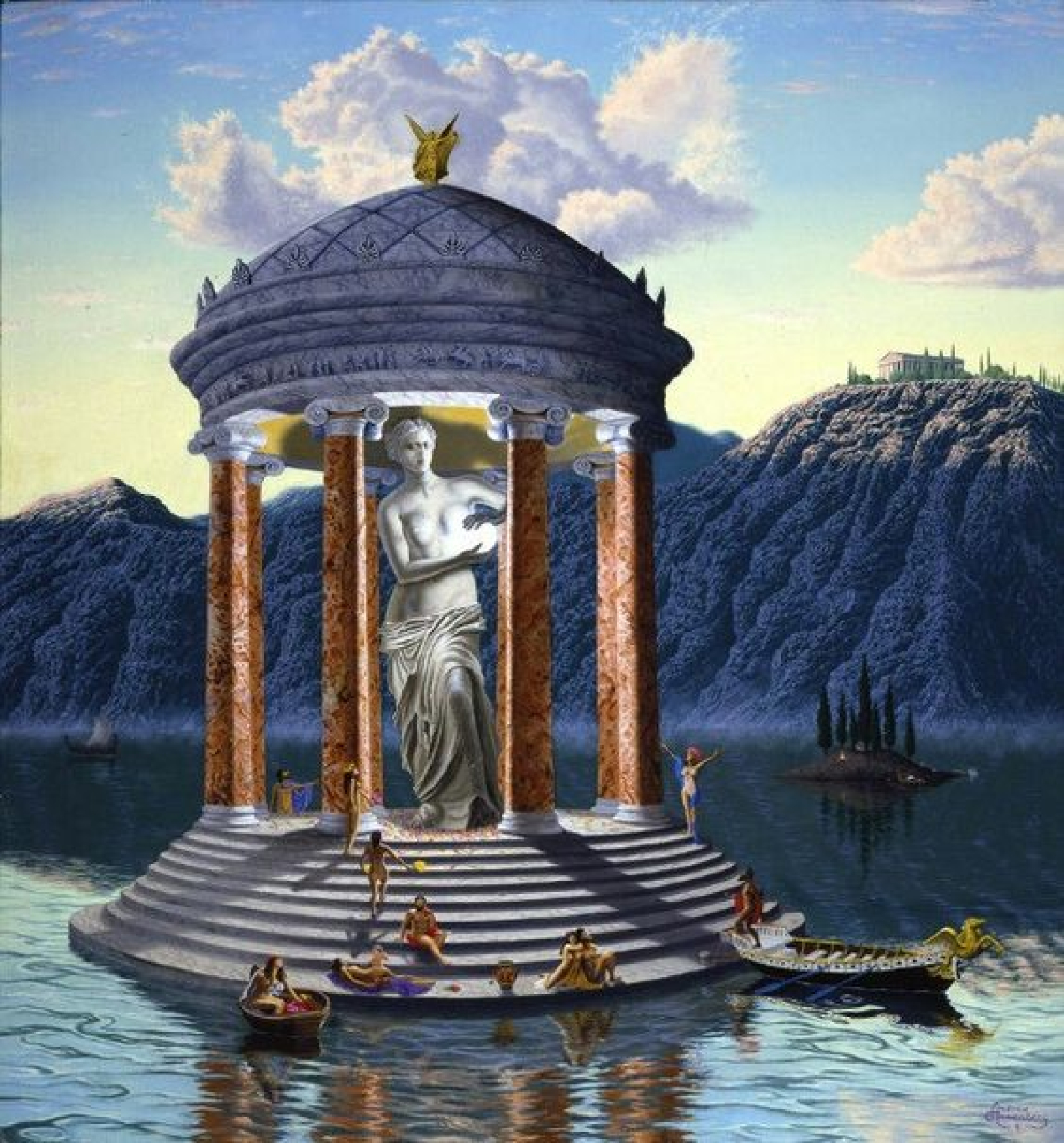 The Ikarian faith, once, the most influencing religion in the continent of Teria, and the official faith of the old Empire, and one of the world greatest superpowers. Today, after many centuries of debates, reforms and some unchanging traditions, it still survives as the official faith, in the form of the United Church of the Reformed Faith, of the Blatian Empire.
One cannot understand the mentality, psyche, politics and warfare of the Ikarians of old without understanding their faith and the power it had over every aspect of their daily lives. Their myths and epic tales are some of the oldest ever recorded, and they still inspire the great and proud people that are the sons of Zerah, the sons of Thunder.

The Ikarians and their Blatian descendants practise a polytheistic religion which worship a great number of gods such as:

Ikarian-Blatian religion belongs to the so called Davidovian religion shared by the Davidovian peoples that share similar myths and pantheons but each one has different characteristics.
The closest branch of the davidovian religion to the Ikarian faith is the Oronai one. Oronai and Ikarians apart from being both davidovian peoples are strongly related to each other, culturally, linguistically (they form their own branch on the davidovian languages) and religiously. Oronai Gods have the same names and the rituals are practically the same as those practice by the Ikarians and later the Blatians. Although the Oronai faith has certain aspects that differenciates it from its Ikarian counterpart (that i'll explain in its own article).
In the beginning Oronai and Ikarians shared the same beliefs as they' were part of the so called Yavana culture (located west of the Albine mountains) but after their split at the end of the 2nd millenium BP both people's beliefs started to diverge slighly.

The origins of the world and the gods are explained in the Ikarian myth of Creation, recorded in many books and stories such as " About the Gods and their deeds" by Ulpianus of Ikaria (written ca. 560 BP and one of the oldest mythological text of the Ikarian faith. This myth is very similar if not identical in the rest of Davidovian religions:
In the Beginning, there was only the primordial dragon,from whose eggs were born the first elementary gods: Abbon Shabai, God of Wisdom, Tyr, Goddess of Earth, Van, god of the water, Meterion, the first god of Fire, Fer, goddess of Fortune and Kallas, god of wind, Verin, god of the artisans and Khair, god of evil, death and hate. This was the first generation of gods. After them, 5000 years after, the Primordial dragon lay down the last eggs, from which there were born the lesser gods, the Spirits of the lakes, the Ladies of Honey, the assistants of the Goddess Tyr, and the Sphenetai ( half human/half lizards) which became the servants of Van and Khair.

When the dragon started to became older and older, she decided to abdicate from his throne as King of the Kosmos. This was announced after the wedding of Abbon Shabai and Tyr. Then The assembly of the Gods was organized in which most of them (including the lesser gods), aside from Meterion, Khair and Van, decided to proclaim Abbon Shabai as King of the Gods. Because of this decision, Khair and Van decided to retire to his realms to conspire to depose Abbon Shabai. Another 5000 years had past, in the meantime new gods were born, Piria, Zerah, Mithra, Sek, Alara and Psefona among them, the daughters and sons of Abbon Shabai, when the two gods decided to strike at the King. Why Van joined forces with these two?, well because he was offended for not having married Tyr.
In the so called Great war of the Gods, many battles were fought.   According to legend, Khair convinced the Sphenetai to join them in his attack to the Heavenly Palace. In the battle that followed, Meterion was killed by Piria with an special arrow casted by Verin and became the Goddess of Fire afterwards. The forces of Khair and the Sphenetai were defeated by a trap set by Abbon Shabai and Alara, in which they allowed them to enter what they believed was the palace, but was in reality a magical illusion as they were entering a jail made of gold. The Sphenetai were captured but the goddess of Death managed to scape. He spend the rest of history disguising himself in different human forms . As for Van, he was captured too but pardoned by Abbon Shabai who allowed him to retain his realm in the rivers and oceans, and pronounced this sentence while let him go: “ One day some will come that will be able, with the intelligence that I’ll give to them, to dominate you and do their will. And thus was prophesied the creation of humans and elves.

As for the latter, Ikarian myths as well as the rest of Davidovian religions tell us that the first humans and elves (who were a pair of twins of each specie) were also sons of Abbon Shabai and Tyr but Khair kipnapped them and casted an spell that nobody could reverse that make them mortals (although thanks to Fer, the goddess of fortune, elves where allowed to live longer than humans). Because they were mortals they couldn't become gods but Abbon Shabai in his divine wisdom granted them power and intelligence to model the earth and its resources to their will, becoming the kings of the mortal realms. Abbon Shabai also managed to modify the spell slightly so that after their death humans and elves that have following the path and ethics stablished by the gods should ascend to their Heavenly Realm and rejoin with their divine parents.

As Ikarians believe, they should offer sacrifices to the gods in order to ask for their favour, as they can modify the destiny of men and saved them from danger. But they can also can punish them if they misbehave or insult the gods. Ikarians understand these sacrifices as a kind of contract between them and the divinities in which they recieve their favour in exchange for food or liquids that are, as their believe, the main food of the goods such as honey, meat, milk or wine.

There is no official rules or commandments that define the Ikarian faith, but many priests and sages agree that the basics of the Ikarian faith can be resumed in worshiping the gods and making sacrifices to them, respect the elders and honor the family traditions. If every Ikarian does this, the future and safety of the State is assured.

Worship in the Ikarian faith is similar to the rest of the davidovian peoples. Praying to the gods, specially in front of an statue or altar at a temple or at home, is a way of worshiping the gods. This can be done at any moment or hour during the day. The other form of worshiping is doing a sacrifice. In the distant past the Ikarians (as well as most davidovian peoples) performed animal sacrifices (usually goats, rabbits or birds). Nowadays the sacrifice consists in a libation of liquids such as milk, honey, wine or water. And in the case of deities such as Tyr, flowers, vegetables and fruits can be offered to the goddess at the base of her statue.

Tips on how not to offend the gods

Priesthood as can be understand for other faiths, even other davidovian faiths, like the seris, is different in the Ikarian faith. Here you don't have people that became priests "as a job". Instead it is an office, specially in the cities of the The Ikarian Empire . Priests are selected from the middle and high classes of the city, and they perform their "priestly duties" for the following year.  Once their term is over, new priests are selected. The exception to this are the Archpriests and priesteses of Tyr, who continued to be priests for life.   In Ikaria, before the birth and rise of the "Reformed Religion", there was no Archpriest, and their duties were performed by a College of Priests at the Imperial Capital. This college was composed of  6 priests selected among the most prestigious temples in the realm. The High Priest of the Great Temple at Ikaria (who acted as the president of the council), a priest from the temple at Lake Bareotis , a priest from the Temple of the Roses, a priest from the temple of Van at Vegus, a priestess of Tyr and finally a priest of the Temple of Zerah (also located in the Imperial Capital). This priests were members of the college for 5 years, and at the end of the term another selection of priests would take place.   It was only after the adoption of the Reformed Faith that the office of Archpriest was created (and the College of Priest abolished), and it was stated that the ones elected for the office would hold it for life. They were granted an special house in the capital, inside the Imperial forum and they also hold the office of High Priest of the Great Temple. With the fall of the Empire the figure of the Archpriest continued to exist in the The Blatian Empire

Through their initiation rite into the priesthood, and despite their short term in the office, priest became the intermediaries between the mortal and heavenly realms. During their one year term the ikarian priest can perform magical healing, divination and have visions sent by the gods (that are usually sent in form of riddles).  Once their term ends the power of the gods lefts them and they become simple mortals again.
This is not the case with the Ikarian Emperor, that thanks to his divine ancestry and the imperial sceptre, can use the power of magic all his life.

One of the sect,  that later during the last 4 centuries of the Empire became the official religion ( and continues to be, alongside the traditional Ikarian faith, the official religion of the Blatian Empire) is called the "Reformed Faith". It believes that a man called Blaticusqui (meaning the Prophet of Blati) was the avatar of Abon Shabai, the father of the gods, that came to the mortal realm to fight against dark magic and to teach the Ikarians the right ways of worshiping their gods.  It was made the official faith in 145 AP by emperor Tiberius VIII.
Founding Date
Ca. 1500 BP
Capital
Blati
Leader
David I, Emperor of Blati
Leader Title
Emperor of Blati
Parent Organization
The Ikarian Empire
Divines
Related Ethnicities

Lake Bareotis, the sacred lake of the goddess Tyr