Nabastis are bidepal digitigrade or ungulate hermaphrodites omnivores. They are the only known sapient species in Xalier. Since they first appeared at the crossing of the rivers Arak and Udaino, they have spread throughout the continent which has led to some interesting developments in their morphology.

All nabastis have leathery skin, which once they reach their teenage years may be covered in scales, feathers or a type of thick fur.
Some examples:
From Left to Right: Scales, Feathers, Fur. 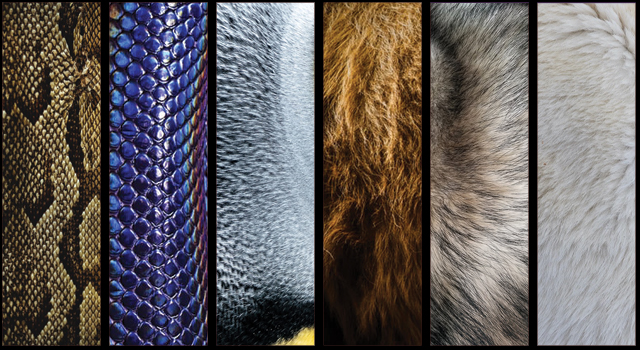 by Evan Carbajal with Unsplash

Despite these three classes, they all share some basic characteristics.

They have pointed ears located at the side of their heads, flat noses, and long mouths with a row of sharp pointed teeth at the front and flat molars in the back. In some cases, the upper jaw grows a hard outer layer similar in shape to a beak.
Their eyes have rounded pupils and a secondary eyelid which allows them to see underwater.

They have two arms with prehensile five-fingered hands and strong nails. Some nabastis may grow and shape their nails to be used as a writing tool.

Every individual has a tail and its longitude depends on their height. Tails come in various shapes and forms: they can be smooth or have bony formations, as well as feathers, hair, or scales depending on the type of nabasti.

They usually have long legs with padded claw-like feet. Nabastis living in the hot desert region tend to have thicker padded feet. Some mountain-dwelling nabastis develop cloven hoofs instead of regular feet.

Nabastis may have horns (a covering of keratin surrounding a core of live bone) of various shapes and longitudes on their heads. The horns begin to appear around ten years of age. The first set of horns is made of a softer tissue than the permanent ones, and they fall off during their first full shedding after which they grow the permanent ones.
The city of Rekia is known for having the best Horn Shapers in the region. The young nalakods wear iron casts around their horns to make them grow into different shapes.
This custom is almost taken to an extreme in Tree Braid's Families, where the ulurus go through the painful process of cutting and twisting their horns to resemble the famous trees of their homeland.

Independent of the morphological differences between each type of nabasti some individuals may be born with additional differences:

One of the rarest types of nabastis are the fire-breathing kind.
This ability manifests for the first time at the moment of hatching. Instead of ripping the shell of the egg, fire-breathing nabastis melt it away.
Same as with the wings, the ability needs to be trained to produce a long-lasting flame, and those that manage to do it are greatly sought after. Fire breathing nabastis usually work as artisans.

In rare cases, and independently of them having feathers, nabastis may grow feathered wings.
When they hatch, a future winged nabasti has a small pair of stunted wings that will fall off just a few days later, leaving behind two stumps that would keep growing until at approximately ten years of age when they will be ready to use.
The wings sprout from the top middle of their backs and are big enough to be able to fly, but doing so requires training, not only to learn the ability but also to gain the endurance necessary for prolonged flying.
Many proficient winged nabastis end up joining the Order of the Messengers or working for their branch organization: The Society of Explorers.

Nabastis are hermaphrodites, and usually oviparous. Some tribes who have lived in extremely cold temperatures have been known to become ovoviviparous.
Although it has zero relation, some cultures believe the number of eggs expelled during the fake laying is a premonition of how many children or clutches would produce the individual. This has been known to lead to social rejection, banishment, and even death.
They reach their sexual maturity around 30/35 years of age, after their second and natural last full shedding/molting. During this time they would experience, for only one time in their lives, a fake laying. Their bodies would produce empty eggs that would be expelled after two weeks naturally. Ovulation initially occurred during the end of the colder months. However, the spread
of urbanization and bigger settlements has led to the discovery of potions that trigger ovulation.

Nabastis reproduce sexually, they have both copulatory organs. After successful fertilization, the womb produces a secretion that surrounds the embryos after the first layer of the eggshell forms. One of the first signs of a successful pregnancy is the squisher abdomen.   Scaled nabastis shed their scales almost constantly during gestation. As this makes them more prone to infections some choose to go into confinement during their pregnancy.
Feathered nabastis grow down feathers between their regular ones as their bellies expand. These feathers fall off two to three days before laying begins, and it has been used to signal the beginning of labor.   Six months after conception the carrier (tsona) goest into labor and lays the eggs. The number of eggs per clutch is usually proportional to the size of the carrier and their nutrition before and during the pregnancy, but there have been exceptions. A normal clutch usually has 2 or 3 eggs. In most cases, eggs right out of the womb have a hard thick shell. They need to be incubated in a warm humid environment.
The eggshell is rich in nutrients, the humidity helps soften and dissolve the eggshell so the fetus can feed on it and grow. At the same time, the eggshell becomes soft and rubbery so it can expand as the fetus grows without tearing it.

When the babies are big enough, they would tear the eggshells by themselves.
As stated before, those nabastis who live in the coldest regions of the continent have been known to experience longer pregnancies, as the incubation period happens inside them. The kids are born still inside the leathery eggshell and parents are the ones who carefully cut it open.
Some mountain clans use the eggshell in different ways with their children. The people from Armobia make intricate patterns in the leathery shell and use it as a small hat for the newborn. The clans from Barinikha use it to hold the ceremonial stew to feed the carrier after birthing. They believe that by doing so they are returning some of the energy back to them.

All nabastis have three stages of development.

They are covered in soft down feathers, over leathery skin. These feathers are shed every 5 to 6 weeks, and replaced by more down feathers.
At ten years old, they shed the feathers and it is revealed if they'll have fur, scales or feathers into adulthood.

Begins with the "Fever". Once they have reached their full height, the nabastis would experience a bout of fever and they would shed/molt revealing their final base color.
Horns, and wings/fire abilities develop fully in this stage.
Scaled nabastis shed less often at this age.

Begins with the "Fake Laying" signaling their sexual maturity, afterward, they would fully shed their fur/scales/feathers one last time. The new ones would have their final markings.


After their last natural shedding, adults scaled nabastis only shed again if their bodies experiment some sort of major change to their anatomy (gaining or losing a lot of weight/pregnancy, severe injuries, or if their skin gets too dry during a prolonged period of time).
Feathered nabastis molten their feathers in sections every two years.
Furry nabastis tend to shed during the warmer months.

Nabastis recognize two different grammatical genders associated with the age of the individual.
The age groups are:
Nalak (from 0-20yo) and UIuru (from 20-30)
Numoke (from 30 onwards). 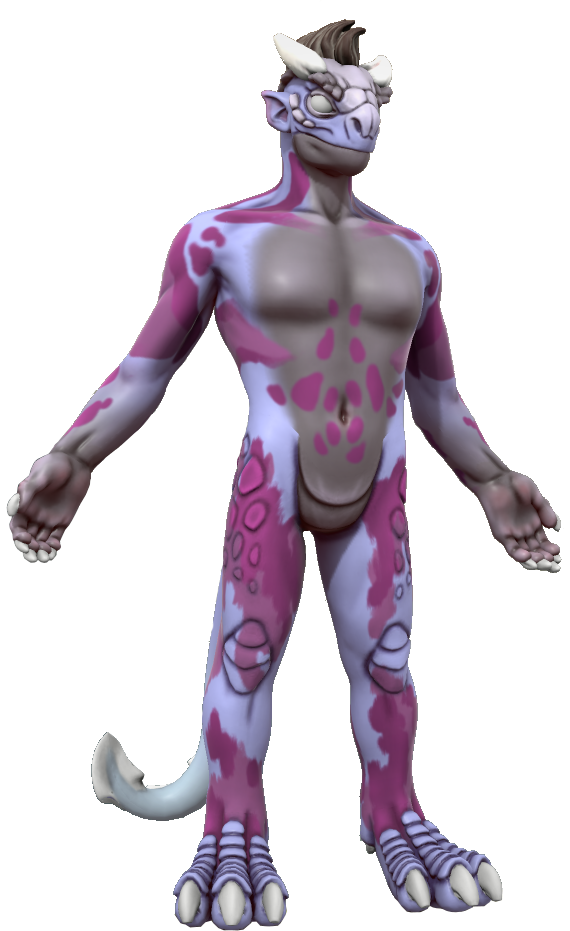 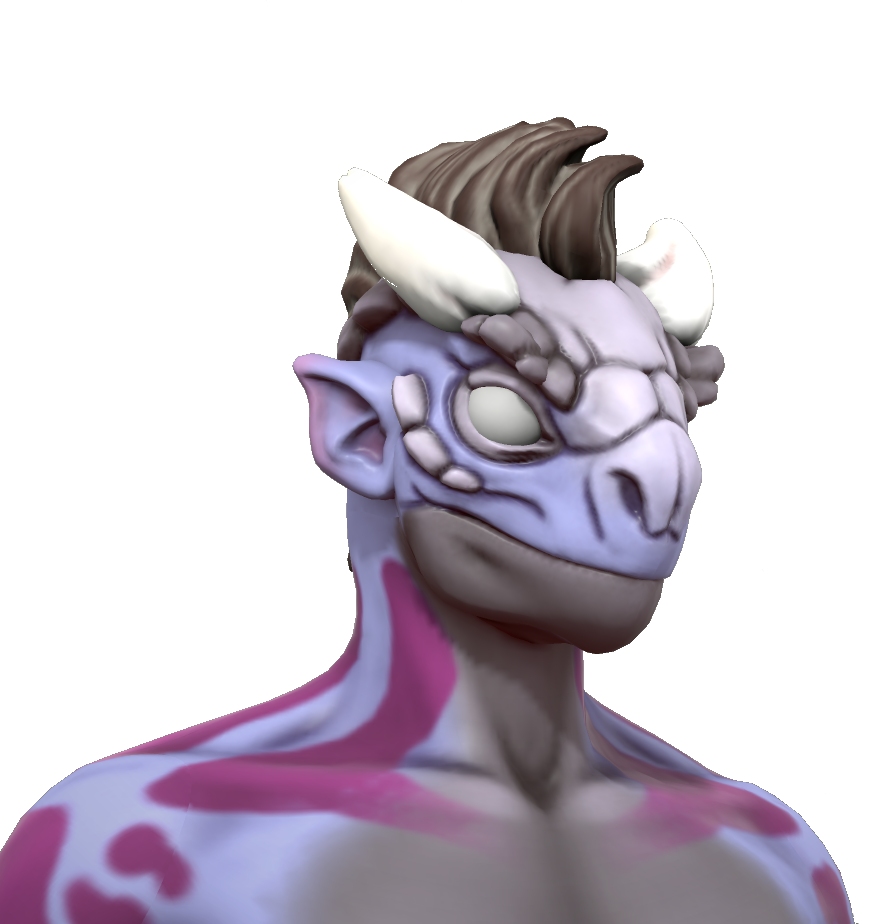 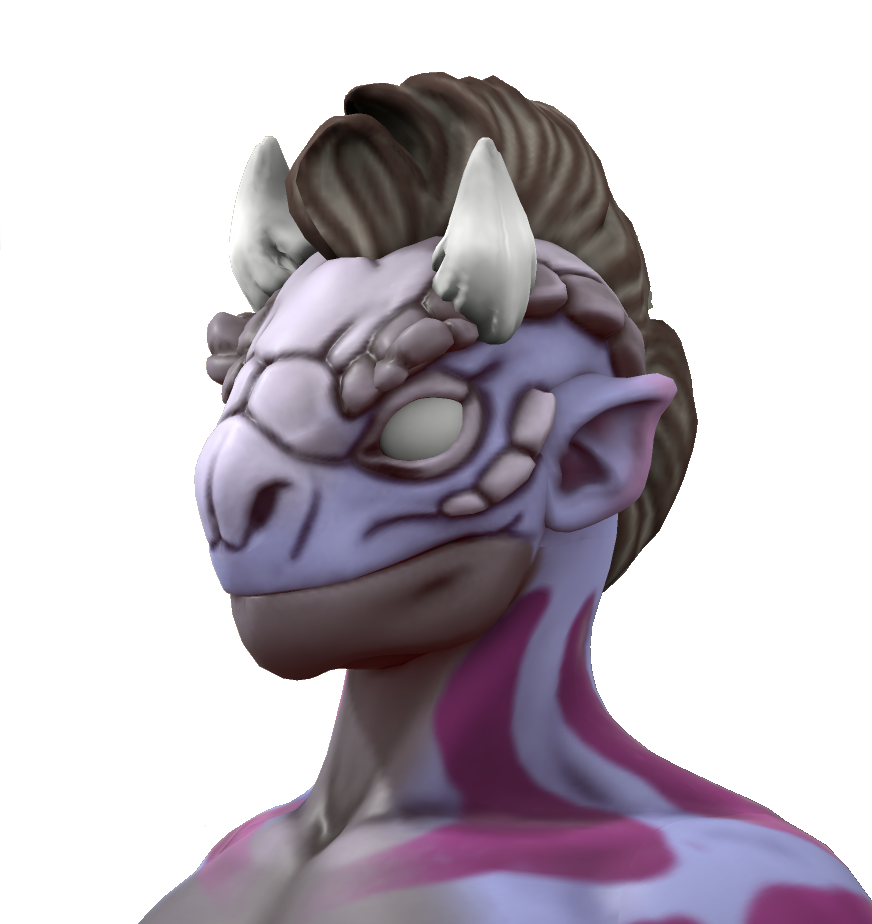 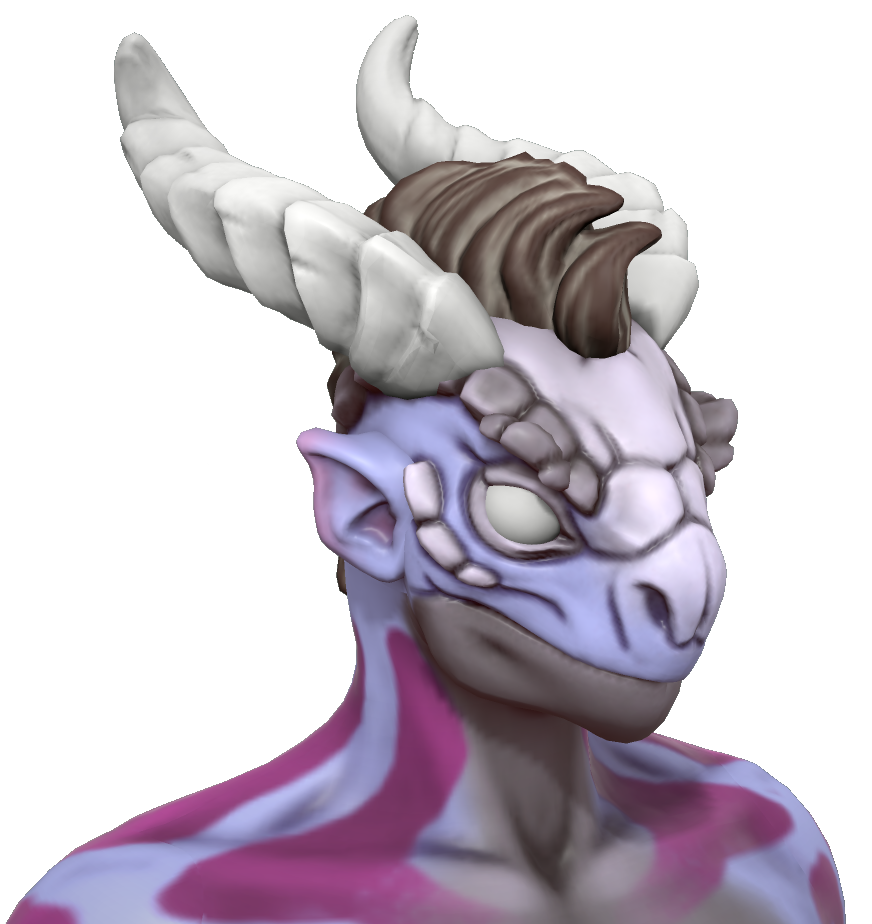 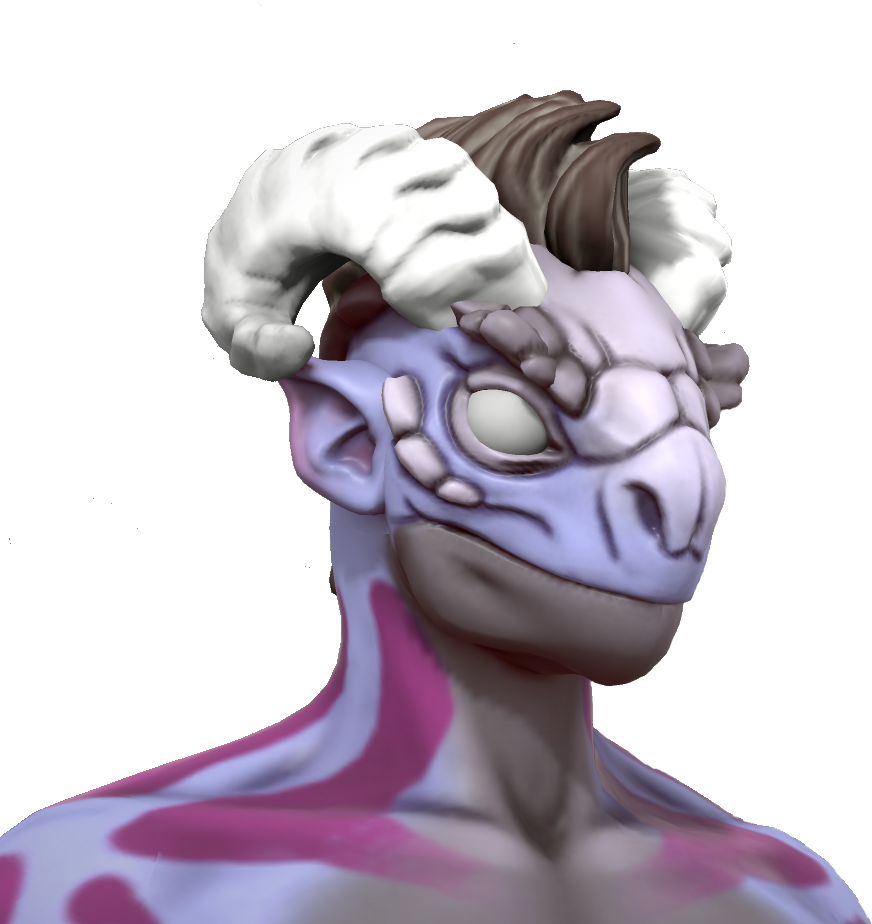 Really interesting article! I particularly liked the section on reproduction - the idea that some choose to go into isolation because of the extra shedding and risk of skin infections is really interesting. Love the bit about gender as well, and the nice table with pronouns! :D

Thank you so much for your words <3

The bit about shedding gave me some ideas about using that to create a difference between people with different incomes.

Evan! The new additions to this article are extra good, I love how they change through the life stages. Naelin had mentioned about the social gender and grammatical gender you were working on and they are a wonderful idea. I will have to give a good thought about grammatical gender in some of my conlangs, you solved the problem in a very clever way :)

aaahh thank you! Yeah, the idea for grammatical genders originated first from having to write about them in Spanish. English is a bit better, language-wise, with enby people, but Spanish is DREADFUL. Thanks for your words <3

Don't I know. Latin languages are awful in that sense. But I guess I can be as "she" as a chair :p

Nabastis are great and this article is so detailed! The "Did you know?" in every section add more depth to this species and their culture. Good job!

Gave it like, then unliked it and immediately re-liked it, so you get the notification of my liking this article twice :3

Ynar wishes you a nice day!   Feel free to visit my world, Ikaharin

Unliked and reliked too because good good job. I spotted a couple typos but I'll tell you in private :)

These are so cool!! I love the detail you've put in, from the hero forge models to accentuate their body descriptions to all the juicy info on reproduction and life cycle. A nice smooth read--Well done! <3