A staple and iconic feature in the Warrior Caste, Xahian power armour is the primary form of protection for frontline Warrior Caste combat Soldiers. At a doctrinal level, the Warrior caste does not employ large numbers of armoured vehicles, instead relying on armoured, mobile infantry, with air and orbital support. Due to the large, powerful nature of Warrior caste members, no other faction is able to field the same quality of armoured troops as the Federation of Xah; other factions do employ powered armoured soliders, but they cannot compete with the robust nature of the Warrior caste. It is the presence of these armoured suits, along with the Federation's superior space technologies, that keeps the Federation the most powerful nation in Known Space.   Although powered suits are commonplace, the Federation of Xah is able to continue to produce advanced suits with the Technical Caste consistently improving the technology, and equipping it with a wide suite of weapons, giving it an unrivalled versatility. Whilst the Federation of Xah has the manufacturing capabilities to equip all of its Warriors with power armour, in practicality, only frontline Soldiers are equipped with it on a regular basis, and even then only when the mission necessitates it. 'Standard' Warrior armour is still effective and the natural abilities of the Warrior caste give them an edge over the standard troops of other factions. 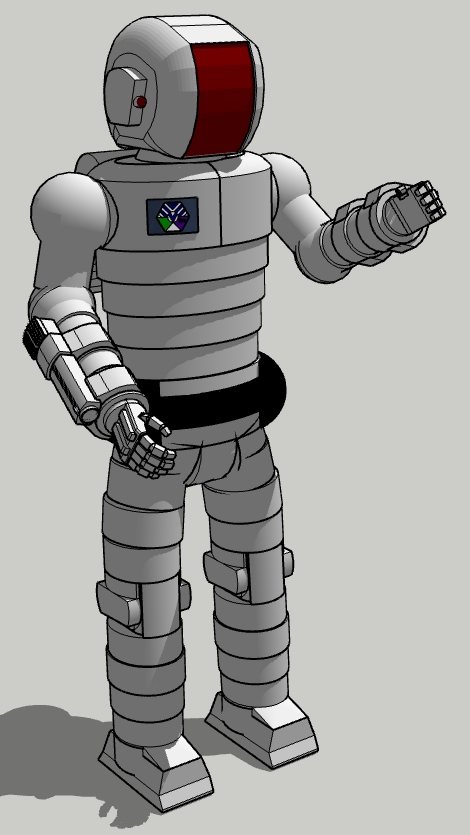 The modern powered armour suit is made of nanoscale materials in a flexible shell, enhanced with actuators and bundles of artificial muscles fibres, able to boost a Warrior's already considerable physical attributes. The exact nature of the material is a closely guarded secret of the Technical Caste, but is capable of resisting kinetic and explosive impacts with good multiple hit capability. It is layered, to allow for flexibility of the operator inside, and the armour itself is in banded plates that can be easily replaced in the event of damage. In the field, emergency repairs can be conducted by using epoxy resin to seal cracks in the armour that might occur from high impact attacks.   Compared to earlier versions of the armour, and to those used by the Northup Alliance, Xahian power armour is highly flexible and allows for almost unhindered movement by the wearer whilst retaining a high degree of protection. Additional modules are available that allow for sub-orbital drops, and even limited flight capabilities, but most field commanders prefer to leave airbourne activity to pilots and aircraft. 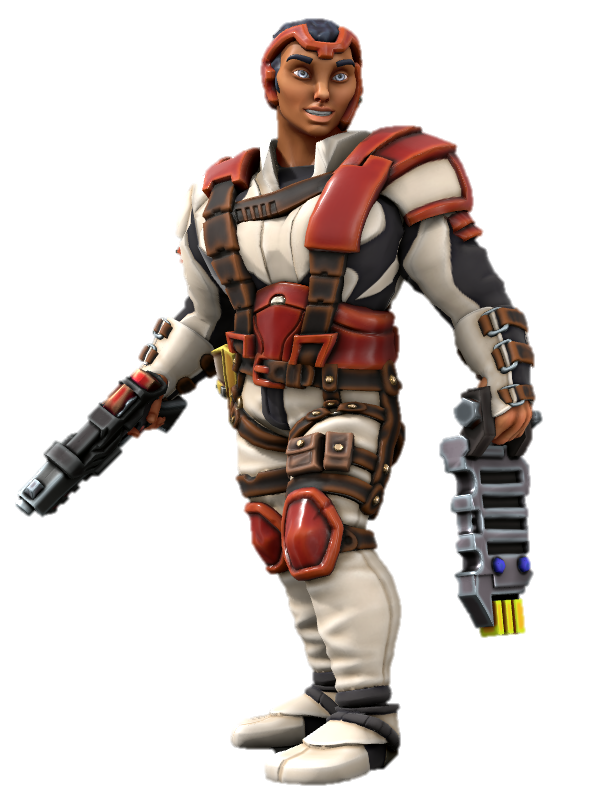 Inside the armour, the Warrior wears a sealed, close-fitting outfit similar in shape and material to a soft-shell spacesuit, but with a system of exoskeletal micro-hydraulics and servos. This outfit provides environmental protection and allows the operator to perform in conditions from toxic environment to a hard vacuum and is 'hard-wired' into connectors embedded in the Warrior's own skin. These connectors deliver the commands to the servos and micro-hydraulics from the Warriors own muscle use, allowing the operator to use the suit with minimal resistance and instant haptic feedback, which in turn is connected to the rest of the armour. Various other life-support systems are fitted to this inner outfit, including bodily waste disposal and IV lines feeding nutrients and combat drugs to the operator.

The suit is powered by a micro-fusion reactor attached to the back of the suit. This reactor is fuelled by a mix of tritium and deuterium, with a time between fuelling of 6 to 9 months, depending on workload and the weapon loadout equipped. Those suits equipped with energy weapons have a tendency to need refuelling more frequently than those with ballistic weapons. The reactor is designed to be removed entirely in one piece, and a fresh fuelled-up reactor added, with refuelling taking place at a specialist facility away from the front-lines. The armour also has a battery back-up that allows operation of the suit's motor functions for around 24 hours (but no weapon fire). This allows the operator to ditch the reactor in case of excessive damage, but still allow them to retreat to a safe location for pick-up. The reactor is passively safe, and a containment breach results in instant shutdown.

Whilst weapon load-outs can be varied according to mission requirements, for the vast majority of operations, a suit will be equipped with a pair of pulsed particle beams, known as a PPB, one on each arm. The PPB fires a short pulse, about a micro-second's worth, of ionised particles that cause significant damage to a variety of armour types, with good penetration and range. The PPB is capable of rapid fire, with a rate of fire of 10 shots per second, although most operators use single shots only, to keep the heat build-up down. The micro-reactor allows for almost unlimited ammo capacity, although the heat-exchangers and barrel can become heat damaged from excessive use, if not allowed to cool properly between shots. The particle beam itself is almost invisible in daylight and too fast to perceive normally, although there is a blue flash as it exits the barrel from Cherenkov radiation.   For specialist missions, one of the PPBs can be replaced with missile launchers, railguns, or lasers, depending on need. The suit also has a standard-issue side arm in a concealed compartment, should the operator have to evacuate the suit.

The distinctive look of Xahian power armour has become a symbol of either Xahian military success, or unwarranted aggression, depending on whose propaganda is listened to. For Xahian citizens, it is a reminder of the righteousness of their cause, that no other faction can create its equivalent, but to non-Xahian civilians under the Federation's sphere of influence, its a constant reminder that the might of Xah brooks no dissent. 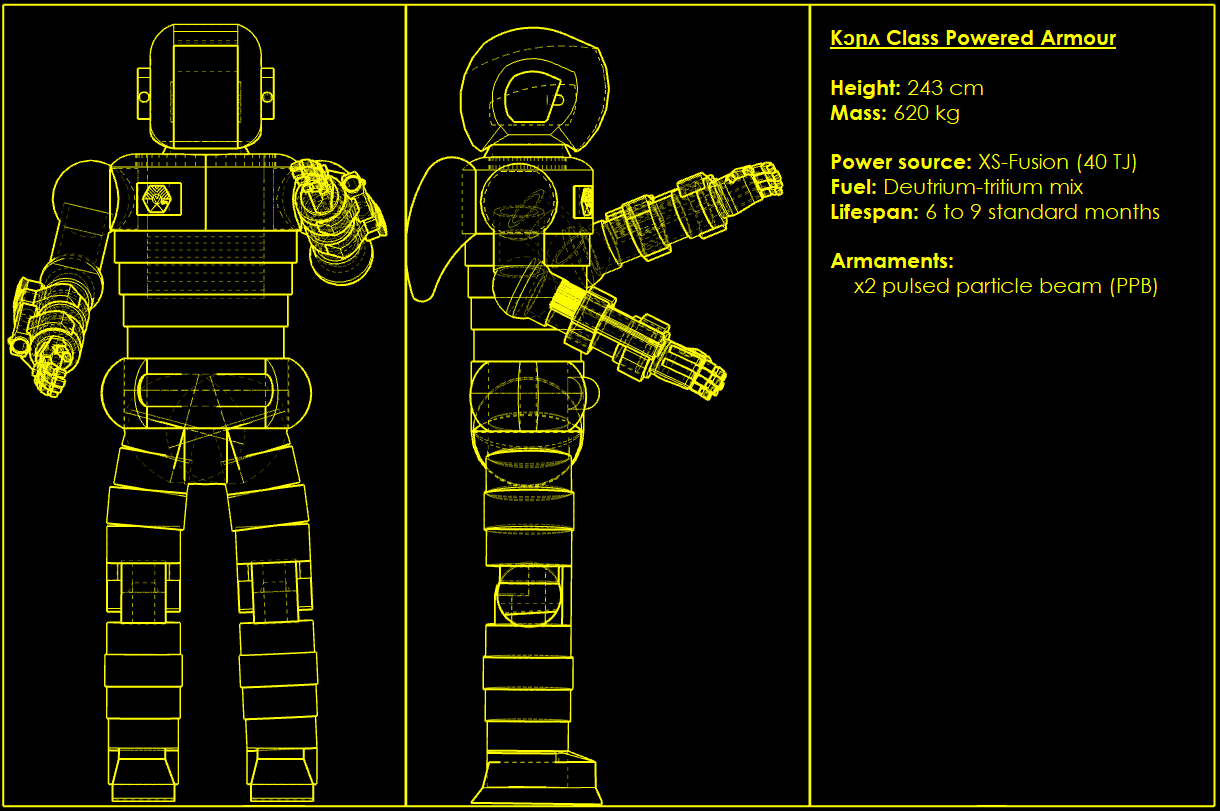 Nice article! I like the armour and the technical drawings that you have go really well with it :D   Regarding the design, even if it use a material more solid than glass, is it not a vulnerability to have a big see-through zone like that? Or is the gain in visibility overcompensating that vs a smaller a opening?   I'm wondering how the armour deals with ammunition. Is there a certain amount stored inside of it? Even so, I imagine that it needs to regularly refill and so there should be some kind of bag/box being carried around, with several armours moving together so that there are still some active while one is refilling.   I like how you've think about the risk of a damaged reactor :D   With the autonomy of the armour and the suit worn by the pilot, I'm guessing that they stay inside for long period of time. Is it physically tiring to be piloting those armours? Or will it be "only" mental fatigue? 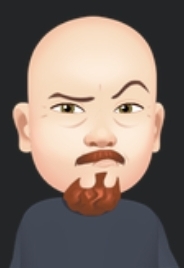 Thanks for the comment :)   The big see through area is the armour appearance when the front has opened up, to allow access for the operator, it's usually closed, and is as well armoured as the rest of the suit. I'll perhaps put in an image with better perspective in that regard.   Ammunition is carried in big drums on the suit's back; it's a lot, but will require refilling eventually. Units of armoured troops are typically accompanied by unarmoured troops, support people and supply vehicles, so restocking can happen. A bit like a tank would.   And yes, the pilots do stay in there a long time, days if necessary. It would be extremely fatiguing to most people, but Xahian Warriors are a genetically engineered caste, with heightened physical attributes, and are trained to deal with the rigours of this type of combat from their early teenage years. Reproduction in Xah is entirely in-vitro, and to contribute one's genetic material to new generations requires exceptional ability, so most Warriors would endure the uncomfortable nature of wearing the armour for long period, as to increase their chances of being 'worthy'.   I shall certainly check out your own article. Thank you for your interest in mine :D

Nice read! Great looking drawings as well, it gives it a real engineering feel. Nice addition of a fusion reactor to the armor and the drawbacks of the first generation xp Your writing style is pretty neat as well with a very technical feel.

A very nice article! A lot of detail. It really gives a sense of the setting too! Especially the different names or nicknames the power armour has.

This is an interesting article, the caste system plays a very fascinating role in the application of the power armor. It being used purely by the Warrior Caste, but worked on by the Technical Caste, allows for a nice mix. I notice you said that the image with the see-through area is the armor when opened, so I wonder how do the pilots see while the armor is closed?

The suit has a number of cameras on the outside that feed to a series of screens on the inside. It might seem reliant on technology, but it was deemed safer than eyeholes.   Thanks for your comment and like :)

I... Like big guns and I cannot lie, you Federationalists can't deny! These sound quite neat, and I love the header picture!