A giant weapon for emergency, made a tower for practicality.

Exclusively constructed by the Daskalarch.
"Kau Kroh" literally means "The Very Large," but it is derived from the headmaster's remark upon the project's completion: "Such a very long distance from the hilt to the target, made short by a single thrust."

The original intent was as a giant sword, though later it became a watchtower for frontier territory.   The Harmony Hunters, an order designed to hunt a supposedly-omnipotent, mythical being named Harmony, built the Kau Kroh after realizing that most of their entrapment and damage spells only affected creatures of human size. If Harmony was the size of a mountain, for example, they would be helpless to stop her. One member discovered a spell to sacrifice a hundred wizards to grow a target to two thousand meters but could not replicate the spell for the target's weapons and armor. The Kau Kroh was built to accommodate the giant, for use against Harmony. It was built as a single sword made from a single, giant, untampered ingot of steel.   Until Harmony came, though, the sword would rot unused. Upkeep of such a massive device needed some payoff, and the order wasn't exactly willing to kill half its membership to use it. However, the Harmony Hunters would need a lookout, both to protect the sword from enemies and to patrol nearby activity. Their order doubled as a keeper of the peace, and the surrounding wild-lands were fraught with bandits. Ergo, the sword was uprighted and used as a watchtower.

The only entry is through the tower's hilt. The hilt is buried deep into the foundation, so a visitor must travel down through several meters of concrete stairs to reach the base.

The tower has a tinny smell. In instances of unbearable rot and decay, it could be evacuated and set ablaze, until the rot is destroyed and the fire starves out. The lightest of sounds can reverberate through the structure, so it is common practice amongst inhabitants to talk through whispers. No talking is allowed when the sun is down, unless in cases of great emergency.   The land is north enough to prevent the sun from turning the Kau into an oven and cooking its residents, but an air conditioning system was built in the Kau's heart.

100 inhabitants of the Harmony Hunters, each one prepared to die at a moment's notice. Most have redundant or unnecessary jobs, since the population of 100 is vital to the tower's purpose, but each spell-caster must produce or govern something of value to justify their residence. A series of five lookouts take turns watching over the outside world. Ten wizards clean the outside surface of the Kau, while another ten clean the insides. Twenty do everyday chores for the other eighty, and twenty-five study their crafts for use in the tower's defense, producing small trinkets tho sell on the common market. Twenty-seven work outside the tower, gathering supplies, enforcing the peace, and selling wares. Upon the destruction of the tower, they have orders to take their own lives. One commander and two direct subordinates, usually the most skilled in a combination of science and the arcane, supervise daily operations.

It is a common joke amongst residents that one can hack off the side of one's room, melt the steel into something useful, and use that to pay the rent. The Harmony Hunters as a general rule share their knowledge of magic and science with any willing to learn it, but the books and alchemy devices used to discover and store particular secrets could be sold as a novelty. They were on occasions when the staff was underfunded, especially closer to its demise.

A lever was made in the Kau's center which, when pulled, would crack the foundation, sending the Kau falling over and killing its hundred inhabitants. The power from the sacrifice would trigger the giant-producing spell on the nearest individual human. The path to the top crosses every room, each of which would be defended by all the tower's inhabitants.

The Kau Kroh was originally a singular steel ingot, dipped into a volcano and tapered into a blade. When the sword was repurposed as a watchtower, the Hunters melted rooms and stairwells into the solid iron structure, to be used as living quarters for a hundred mages. Holes were carved into the side to act as windows, from which tenants could keep the blade razor-sharp and oil off any rust that formed on its sides. On the top was built a crow's nest, made of temporary wooden materials, from which a lookout could view the surrounding area. Utilities such as cool air, water, and electricity were built into the system as the technologies developed, to make life there much more bearable.

While the general structure is exclusively metal, inhabitants over the centuries left their mark on its function. The first generations serrated the blade's edges and chiseled long lines along the its length. Following generations scraped murals betwixt the lines, each generation becoming more and more creative with space. For example, one generation drew an epic encounter of a shielded warrior fending off a lion, while the following generation made a three-dimensional city on the shield. The next generation turned the houses' windows into new paintings, and so on. The end result was a fractal, made of thousands of designs of varying styles.   Each room was attempted to be a rectangular prism, which cross-sections of a square and a golden rectangle. Better tools through the years have made for more accurate edges and dimensions. Most rooms have at least one bed to accommodate the inhabitants, with one additional piece of furniture to define the room's role. For example, the kitchen has two beds and a stove, while the library has a bookshelf and three beds.

Harmony never came, but the surrounding land soon came under siege by more human elements. The Keyrit Empire, who housed the order, suffered a massive attack from the east. The tower was located outside the last major city on the continent to fall. In desperation, the commander executed the failsafe that would activate the giant spell and topple Kau Kroh itself. The inhabitants died, but a nearby loyalist woman, one Utra Trewo, received the relevant powers. She became a fierce warrior for the Keyrit and practically single-handedly won back the continent for her homeland.
RUINED STRUCTURE
3542 Weroo Vyiyi
Type
Tower, Mage
Owner
Utra Trewo, The Great Sentinel of Raweto
Owning Organization
Harmony Hunters
Characters in Location 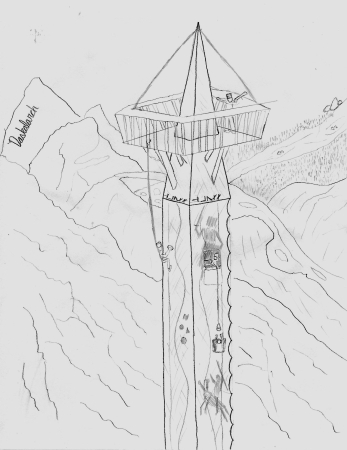