Hut Rarei was born to peasant farmers outside the village of Jattau. He was the seventh of twelve children, all of whom miraculously would see adulthood. The same could not be said for his childhood crush, who died of an unknown disease. Hut was devastated, and he never so much as courted another individual for the rest of his life. Whether he was too devastated, too dedicated, or too disinterested, no one will ever know.

Most other accounts of Hut's childhood are recorded through his autobiography, since information about him was censored by the Wlitowan occupational government. While most historians take it with a grain of salt, his account of his own life is notably down to earth and lacks exaggeration. Hut recalls being closer to his father than his mother, but closer to his brothers and sisters than either of his parents. He recalled accidentally running the family wagon into a rut. He was physically incapable of lifting the wagon, but he didn't want to catch his parents' attention. He inevitably attracted them, however, when he called his siblings to help lift the wagon.
He wrote about a time when he caught a few small animals stealing crops from the side of his farm. He knew that protocol was to kill the poor creatures, and perhaps cook them into a meal depending on which creatures they were. Be that as it was, he couldn't bring himself to kill small animals like that. He dislodged a fence post and began wiggling it at the creatures, pushing them back and separating them from his family's crops. He pushed them off his property without hurting a single one. A week later, the animals returned to ravage half of the crop, and the father had to do the dirty work of killing them. The family would never know that Hut let them escape, but the lesson Hut learned from the month's events carried with him through his entire career.

Hut Rarei, unlike most farmers' sons, didn't want to leave his crops to explore the great beyond. However, when the Rarei clan grew too numerous and his job became redundant, Hut joined most farmers' sons in joining the military. He didn't possess particular physical prowess in any category but was nonetheless able to defeat nearly any foe with foresight and quick thinking. When the military held an internal martial tournament, Hut didn't win but placed. The old general in command of the army was shocked yet amused to find a man of Hut's physique on the podium, and he took Hut under his wing to study further. Rarei went from a private in the ranks to a lieutenant as the general's aide to a major as the general's successor. When his mentor passed away in the night, Hut even took the title of general.

General Rarei took steps that gained the respect of his men. He increased and improved rations, establishing a farm on the military base and acquiring foodstuffs from the local area. While he himself was never given a formal education, he was given a tutor by the Tuhran marshal to educate himself. Rather than share the knowledge all to himself, Hut invited the tutor to lecture his men as well, building a large podium and platform to meet the needs of the tutor. Even still, he increased drills, indicating that he demanded a lot more for the additional benefits he gave. Massive construction projects made the barracks an impregnable fortress, mostly thanks to the hard labor of his soldiers. Equally many soldiers transferred out of his command than in, so brutal was the work. Those that stayed, though, were the toughest, smartest, and most loyal soldiers in the Empire.

Like all generals, Rarei was summoned to a war council by the Tuhran marshal. There, he was told that the Wlitowa and Keyrit had engaged in a battle that weakened both armies past the point of recuperation, and that both nations were ripe for conquest. Boats had been requisitioned to carry troops across the sea into Wlitowa. Hut was not just the only one against the invasion; he was the only one not enthusiastically for the invasion. All the others immediately began making plans to move their troops towards the coastline. General Rarei couldn't make a sound argument against the action, but his gut called for hesitation. He stated that he would decline the invasion. For this, he was laughed out of the council.

When his troops didn't show up at the docks, however, the Tuhran military considered General Rarei's statement more seriously. General Hut was declared an insubordinate, and the invasion was delayed a couple days as two generals rerouted their troops to deal with the traitor. General Hut's construction work paid off, however. The rival generals tried to rush the fortress but were soundly turned back. Hundreds fell, soldiers that were badly needed for the upcoming invasion. Instead, assassins were sent to infiltrate Rarei's ranks and kill the rogue leader. Hilariously, these assassins couldn't complete the hard labor tasks required of them as part of the daily soldier routine, and they were easily spotted and thrown out. Finally, the generals marched out to appeal to Rarei's conscience and patriotism. Rarei didn't bother to respond. Their precious time having been wasted, the main army resumed its invasion, leaving Hut Rarei victorious and alone.

Hut would be the only one to taste victory that year. The entire Tuhran invasion force was annihilated in the Battle After Marriage, and Tuhra soon found itself without a loyal military. Wlitowa and Keyrit, far from the crippled powers they were believed to be, were now Representatives of the City of Five Roads approached General Hut. The traditional regalia of the marshal had died with the marshal on the fields of Wlitowa, but the craftsmen of Tuhra had done their bet to forge perfect replicas. These replicas were given to General Hut, as a desperate plea for General Hut to take on the mantle and lead them through the new war. Hut was a nationalist patriot, and he took the mantle on proudly and decisively.

The few reports that came back from the Battle After Marriage were disjointed, conflicting, and not authoritative, but Marshal Hut assumed rightly that his army was outnumbered and outgunned by a staggering amount. He consolidated his forces in and around Jattau, where he expected the coalition forces would land. The only other coastal provinces adjacent to Wlitowa were marshland and steep cliffs, both of which would bog down the invasion enough for Hut to gather strength.

Keyrit was the first faction to invade. Hut was correct that the counter-invasion fleet would assault Jattau, but the lack of a standing navy meant that Hut couldn't capitalize on his decisions and pin the enemy down. Keyrit floated away with minimal casualties and was able to engineer means to scale the cliffs to the south of Jattau. The process, however, allowed Tuhra a precious few weeks of time.

Hut Rarei did what he could, but Tuhra couldn't mobilize fast enough to give him an advantage. Hut stayed in his fortress in Jattau as the Keyrit invasion force swept through the south, reaching the City of Five Roads and capturing it without the need for a siege. Hut now saw that he was cut off from the rest of Tuhra. To the north were the marshlands that would yield nothing but attrition when crossed. The coalition held the lands to his south and his east, and, while his fortress province was self-sufficient in terms of food, he knew that Keyrit could defeat Tuhra in detail. As a result, Rarei chose to sally out his forces.

By going around the City of Five Roads, Marshal Hut's forces could ignore the coalition garrisons in command of the city. They managed to catch up to the invasion just before it reached the last Tuhran stronghold in the east. Hut Rarei's first and only field battle ended in a Pyrrhic victory, where Keyrit was beaten back but could certainly return. By fighting the Keyrit forces, the marshal had abandoned Jattau to the Wlitowan prong of the invasion. Without his support, his stronghold fell within weeks. Rarei could not return to reclaim it, lest his own battlements be used against him. Instead, he chose to collect all the food he could find in Tuhra and prepare the last stronghold for a siege. His management could hold Keyrit off but could not keep the combined coalition forces from taking the walls. Once the walls were breached, Hut announced immediate and unconditional surrender.

While Hut was loved by those serving under him, his one Pyrrhic victory and his lost war made for a very poor track record on paper. The coalition forces that handled the partitioning of Tuhra and Unterritory brushed him aside, letting him go to do as he pleased. In their eyes, he was too small of a threat and too insignificant of a power player to include in their talks. Hut returned to his farm, embittered and psychologically defeated. He suffered from bouts of depression in his middle and older age, and he wrote books often to take his mind off his emotions.

While Hut Rarei was secretly admired throughout Tuhra, the occupational police from Keyrit and Wlitowa suppressed his identity as a national hero for over a century. Ironically, the suppression only served to build upon Hut Rarei's mythos, turning the man from a simple farmer-turned-marshal to a legend among humankind. He was the icon of the Great Eastern Uprising. Even though the occupiers won that war, Hut Rarei was never sanctioned again as a symbol of Tuhran nationalism. 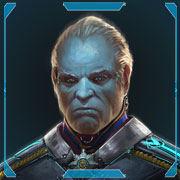 Really interesting man. I like that he was at least allowed to return to his farm, though it's sad that the war had a lasting mental effect on him. :(