In Eladriel, the capital city of the elven Kingdom of Amredhel stands a curious artifact, a silver and mithril statue of Valentine, the Vampire King. Elvish nobility and military leaders begrudgingly acknowledge that without Valentine's prodding, the elves might have gone extinct and the known world might have been lost to the Far Realm. The fact that they keep a statue of him in their largest city may be proof that the elves are more sentimental than they seem.

Them elven officers may not like him, but I've been out drinking with the enlisted Entulesse elves and, to an elf, they ALL love that Valentine fella! All their best drinking songs are "Valentine's Stand This" and "Our Debt to the Vampires That." The common enlisted elf's toast is, "We March to Valentine's Flag." If old Val wasn't properly dead, he could easily take that antlered Elf-King's place as leader of the Vindicators!

In the elven Kingdom of Amredhel, in the capital city of Eladriel is a grove known as Valentine's Flag. A statue of silver and mithril bearing a white flag marks the spot where Valentine, King of Vampires stood bearing the white flag of peace for three nights. Eventually, he was allowed into the city, the first vampire to enter the Court of Silver Stars as an ambassador.

Valentine proposed an alliance of vampires, elves, lycans, and all the peoples who loved the moon goddess Thaya. The Shattered Moon Coalition was formed because of Valentine's persistence and the mortals (and undead) finally won the War Against the Far Realm. 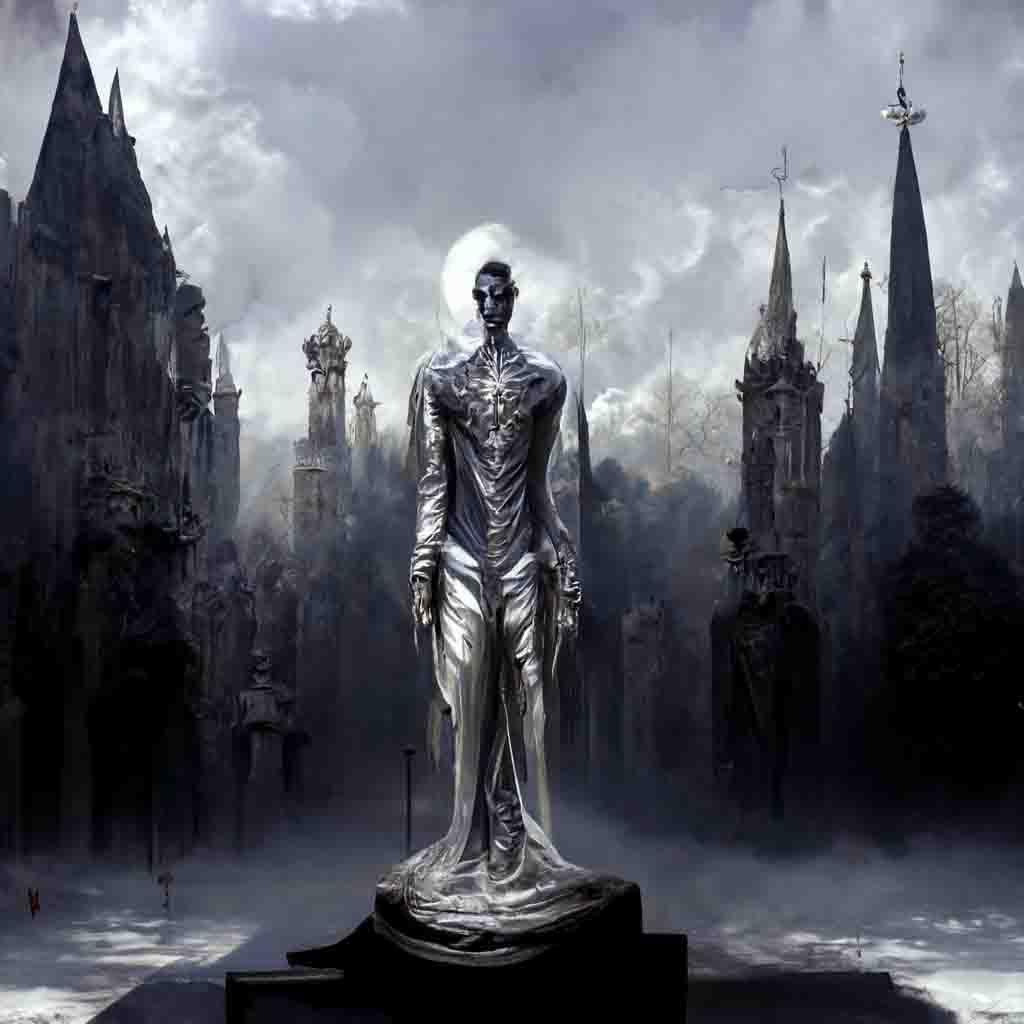 Unfortunately, Valentine did not make it to the end of the War. He was lost in the Battle of the Barrow Shard when he barrelled into a knot of aberrant soldiers. He never returned from the battle and it was assumed that his body was dusted by some anonymous aberration. Without Valentine to lead them the vampires of the Blood Moon Covenant were edged out of the alliance that they had spearheaded.

The Faithlessness of Elves

When the war ended the elves were given a spot in the Concordance for Survival and a leadership position in what became the mightiest civilization that the world has ever known. They dissolved the Coalition and created a new group called Thaya's Vindicators. They invited the druidic powers to join them and pointedly left out the vampires and lycans who had been allied with them during the Far War.

The vampires and lycans remaining on the Shattered Moon were given a choice. They could fly back to the world of Erathia below or they could remain on the moon. However, they would no longer be welcome on the Telperion Skyships of the elves now that their coalition was dissolved. Some stayed and some returned "dirtside", but the vampires and the "shifting folk" have not forgotten that the elves took away their chance to join the leaders of the Concordance.

The Legend of Valentine

Despite the poor treatment of vampires and lycans by their leaders, the fighting elves and common soldiers remember Valentine's gamble and his savagery on the battlefield. Over the years, vampires and werewolves have been allowed to become full citizens in the Zone. They have to promise to only feed on consenting mortals and they have to "Bear the Ident-a-hedron".

In the neighborhood grove of Valentine's Flag, young elves gather in Valentine's memory. There are music and dance clubs, such as the Bloody Flag, where gothic vampire admiring elves can dance until dawn. Actual vampires are rumored to also frequent those clubs.

On the Barrow Shard itself, a clan of vampires lives "Undershard", clinging to the bottom of the shard and staying in the darkest shadows of Lokorn. They commemorate the night that Valentine "died" with a great festival that the elves also join.

Only the highest members of the Vindicator military, the high nobility of Amredhel, and the royal family know that the silver and mithril statue actually contains Valentine himself. He is agonizingly trapped in silver and mithril barely able to perceive the world around him.

The former elven monarch, Thirion Elf-King decided that Valentine was becoming too popular. He did not want to share power with vampires when the Far War ended. He betrayed Valentine on the Barrow Shard and trapped his former ally in a torturous prison. The undead Vampire King patiently waits for his eventual release and his horrific revenge.

Valentine, the charismatic King of the Vampires allied with the elves after the tragedy of the First Armada. He was one of the leaders of the Shattered Moon Coalition that led the world to victory in the War Against the Far Realm.

The ancient elven capital hides in the center of Hartshome Forest. Tradition and modernity clash for the souls of elvenkind.

Answering: "an artifact that embodies a hideous or monstrous idea"
Visit kitoypoy's Competition Page Check all other answers to this prompt Competition Homepage

Oh, man, I love that spoiler! But I also love the whole thing, particularly the contrasting opinions on Valentine of the soldiers vs. the higher-ups.