Sir Basil Zaharoff, GCB, GBE (born Vasileios Zacharias; Greek: Βασίλειος Zαχαρίας Ζαχάρωφ; October 6, 1849 – November 27, 1936) was a Greek arms dealer and industrialist. One of the richest men in the world during his lifetime, Zaharoff was described as both a "merchant of death" and a "mystery man of Europe". His success was forged through his cunning, often aggressive and sharp, business tactics. These included the sale of arms to opposing sides in conflicts, sometimes delivering fake or faulty machinery and skilfully using the press to attack business rivals.   Zaharoff maintained close contacts with many powerful political leaders, including British Prime Minister David Lloyd George, Greek Prime Minister Eleftherios Venizelos and Ottoman Sultan Abdul Hamid II.   George Bernard Shaw based his character of Andrew Undershaft in his play Major Barbara on Zaharoff. He likely served as a primary inspiration for Ian Fleming's fictional James Bond villain Ernst Stavro Blofeld.

Zaharoff did not make arms dealing his sole business at first. After Cyprus passed under British control in 1878 he returned to the United Kingdom; by 1883 he was working as a shipping agent in Galway, Ireland, where he recruited local girls for work in American factories. He also had a spell in the United States where he worked as a confidence man, and later as a salesman for a St. Louis railcar business. In 1885, posing as "Prince Zacharias Basileus Zacharoff", he married a Philadelphia heiress, Jennie Billings, and was pursued to Rotterdam by detectives after his exposure as a bigamist by a Briton who recognised him as the same man who had married a British girl in Bristol in 1872.   Zaharoff sold munitions to many nations, including Great Britain, Germany, the Russian and Ottoman Empires, Greece, Spain, Japan and the United States. Despite his reputation for corruption, he was instrumental in marketing military equipment, including various famous weapons such as the Maxim gun (one of the first fully automatic machine guns) and the first working submarine. The British-Swedish Nordenfelt produced a range of anti-torpedo boat guns in Erith, Kent, Stockholm and Spain.   Zaharoff worked for Vickers, the munitions firm, from 1897 to 1927

In the years immediately preceding World War I, Zaharoff's fortunes grew in other areas to support his arms business. By purchasing the L'Union Parisienne des Banques (Union Parisienne Bank), which was historically associated with heavy industry, he was better able to control his financing arrangements. By gaining control of Excelsior, the popular French daily newspaper, he could guarantee favourable editorials for the arms industry. To gain public recognition and acclaim, he founded a retirement home for ex-French sailors, while a Chair in Aerodynamics at the University of Paris led to further honours. 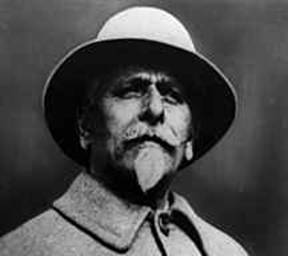