This article is one of a series providing basic information for someone choosing to role-play a Birdfolk of the Affected Culture in a TTRPG based in the World of Cartyrion. The series is designed to encourage preparation of a Player Character by focusing on the nature of the character without focusing on the game statistics.

Ever since your hatching, there has been something different about you. Misfortune seems attracted to you, and yet - more often than not - it seems to leave you unscathed. Others have noticed this as well, and as a result, you have been marked as one of the Affected.

The establishment of the Affected Birdfolk culture was not due to any migration or conscious choice of lifestyle. Those of the Affected Culture are who they are by the will of the gods, or an accident of birth (just like those of the Gifted and Truthseer cultures). Some say that the Affected are born to parents who were exposed to more danger and adversity than other Birdfolk, or to those whose families faced extended hardships, whether in the home city of the race or out in the wider world. This belief assumes that bad luck can be inadvertently concentrated into the young, and when this happens, the result is an Affected.

The Affected are referred to by Birdfolk of other cultures as "the Unlucky", "the Jinxed", or "the Hexed", but the fact is that the Affected have become somewhat hardened to the adverse situations that they seem to be attracted to. Bad things happen to them - and they survive. The Waveriders often try to recruit an Affected into their crew as a "good luck charm" -- somewhat ironic because the 'good luck' refers to bad things always happening to the Affected rather than any of the other crew!

The Affected can be found anywhere Birdfolk can be found. They do not form cultural enclaves; they live among whatever culture their parents belonged to.

Interacting with Other Birdfolk

Your relationship with other Birdfolk cultures is a bit complicated. Typically, there is little or no friction among Birdfolk cultures - to an outsider, it would appear that the Birdfolk do not even recognize cultural differences among their own kind. This is to some extent true. Unlike some of the other races, there are no Birdfolk cultures that deem themselves superior or 'purer' than others. Despite being quite different in practices and preferences, all Birdfolk cultures accept the validity - and even necessity - of other cultures to improve the lot of Birdfolk everywhere.

Birdfolk of other cultures may look upon you with a bit of pity since you are the brunt of more than your share of bad luck. At the same time, they are appreciative that with you around, it isn't them suffering. A rare few may fear having you too close; they don't want to be caught in your 'blast zone'. But most Awkwana never express these feelings or concerns, and the famed Birdfolk lack of body language and facial expression means you don't have to worry about seeing it everywhere you go.

Interacting with Folk of Other Races

Awkwana do not have any deep seated prejudices against other races, except perhaps Kobolds. Your people have been aware from their very Awakening that Cartyrion is peopled by many races; almost all of which had thousands of years to spread around the world before the appearance of the Birdfolk. The Awkwana are remarkably tolerant - perhaps the most tolerant race on Cartyrion. Those of other cultures are welcomed within Birdfolk society as long as they are willing to respect the rights and customs of the Birdfolk and any others around them. Temples or shrines to deities of other races are commonplace in the larger Awkwana cities.

You will not be put off by the customs, traditions, or attitudes of others even if they run counter to the norms you were taught in your youth. The most important tenet of your Birdfolk upbringing was tolerance, so as long as another's actions or beliefs are not a direct threat to you or your family and friends, then they are none of your business.

You will try to make the best of any situation you find yourself in - even when bad luck strikes. Optimism is as popular an attitude among the Affected as is fatalism.

You will never bemoan your "bad luck" lot in life, and especially will never question (or curse) your gods for making you one of the Affected.

Affected can take up any profession, but there are a few occupations that they are uniquely suited for among the Birdfolk. Lignthing Caller and Trapfinder are two examples - both involve deliberately putting oneself in harm's way in the hopes that misfortune will focus on the Affected and leave others alone.

While most Awkwana avoid heavy metal armor, the Affected may choose it for the better protection it offers - even though they may not be physically able to wear it without suffering loss of dexerity or comfort.

Like all Awkwana, you are already equipped with a sharp beak for a weapon, and you know how to use it. Otherwise, you will prefer the lighter, smaller bladed weapons that take advantage of dexterity as much as strength - as all Awkwana do. 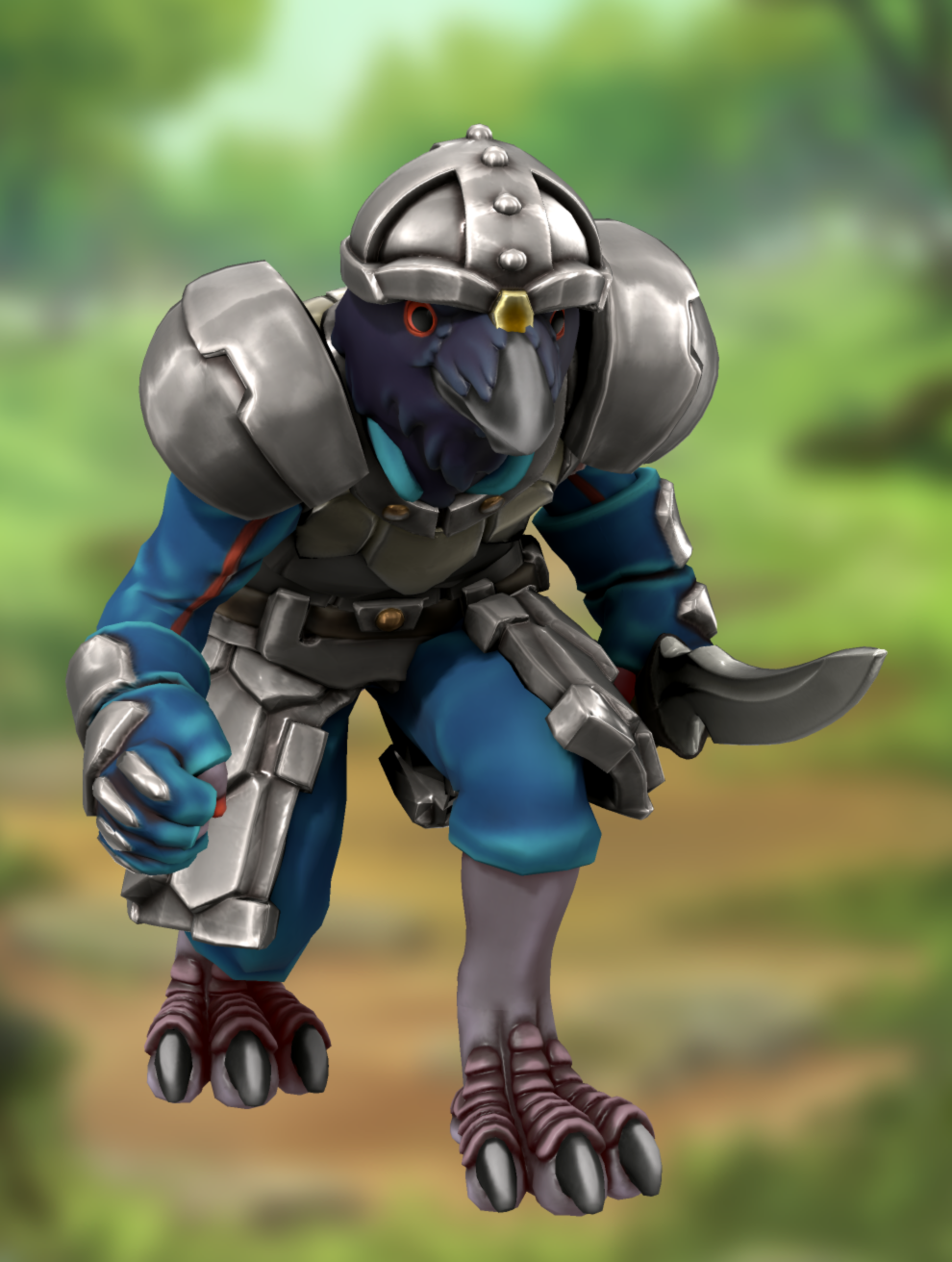 An Affected Trapfinder
Those of other Races that are accustomed to reading individuals by means of facial expression and body language will have a hard time reading you, since your physiology prevents the former and your upbringing prevents the latter. This may lead to some initial distrust that must be overcome by dialogue and action.

Interacting with Your Adventuring Party

If party members are not used to interacting with Birdfolk, they will have trouble reading your emotions since you lack the "body language" they are probably used to. This goes both ways, though... if you are not from a background that included interaction with non-Birdfolk, you may not understand the body language and facial expressions of your fellow party members either.

You understand that bad luck seems to be attracted to you, but at the same time you are better at enduring it than most others. This may make you more willing to take risks, and more likely to put yourself into positions where, if something bad is going to hit the party, it will hit you first. Eventually, your party will come to appreciate the fact that "bad luck" seems focused on you - assuming you continue to survive it.

The Birdfolk generally go by a single name which is given at hatching. Typically the name translates (sometimes loosely) into a simple phrase that identifies some dream or desire that parents have for their child - and that name will be used for life.

But the Affected are different. When you were recognized as being one of the Affected, your parents likely abandoned any original hopes for your future, and gave you a new name - one that is still hopeful, but is more cognizant of your reality. Thus, your translated name that meant "Reach the Stars" may be replaced by "Always Perseveres". Alternatively, your associates may give you a new name that reflects your "talents" in their circumstances. The Affected that finds a place on a Waverider crew may end up being called "Calls the Lightning", or "Survives the Storm".

When you become involved with an adventuring party that consists of Folk other than Birdfolk, you will typically give the Common translation of your name rather than expect your party-mates to be able to properly pronounce your name in Awkwan - a language with a number of unique phonetic structures.

Man I feel sorry for these.

Don't. They're used to it. Their in-game stats give them bonuses to every saving throw they make. (They also have the ability to "redirect" any ill effect - condition, AoE attack, etc.- from a nearby ally onto themselves -- and then they get to roll their enhanced save.)