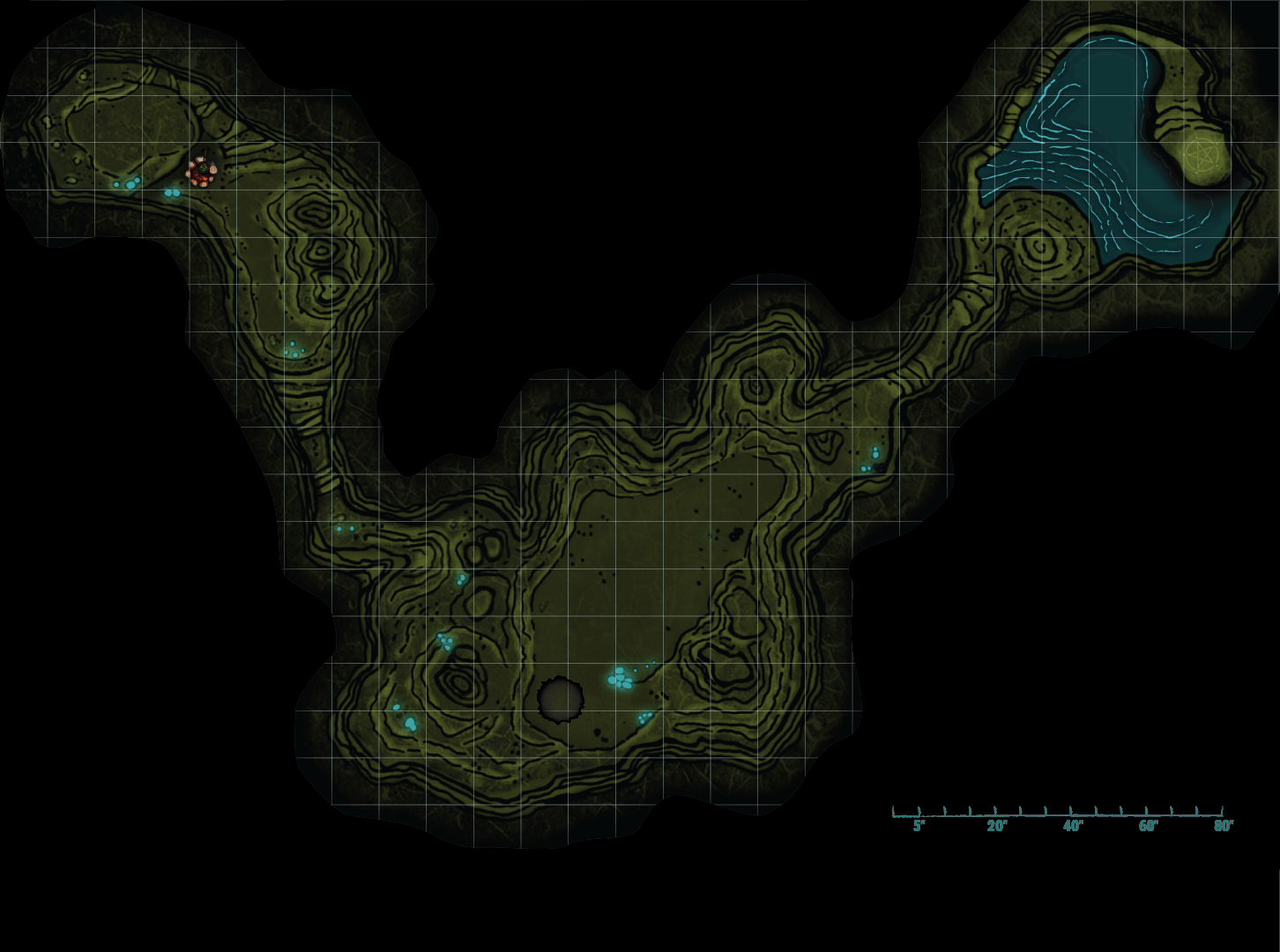 
Charge. If the baelbog moves 20 feet or more straight towards a target and hits with a gore attack on the same turn, the target suffers an additional 7 (2d6) 2d6 damage. A Medium or smaller target must succeed on a DC 13 Strength saving throw or be knocked prone.   Relentless Advance. The baelbog is unaffected by difficult terrain, and can ride over water and other liquid surfaces.   Shadowy Veil. The baelbog is treated as invisible to any creature more than 15’ from it while in any woodland environment.


At a distance, a baelbog appears similar to a large if somewhat gaunt stag deer. Closer examination, however, reveals this creature has deep-set red eyes, barbed and moss-covered antlers, jagged hooves, rows of sharp teeth, and fur covered in patches of mange.

These creatures serve Krampus as guards outside its lair and as mounts when necessary.


Trap. When an animated bear trap knocks a Medium or smaller target prone, it immediately makes a second bite attacks against the same target and automatically grapples its target if this attack hits.


These traps have been animated through the fey magic. It resembles a normal bear trap, albeit one with especially wicked sharpteeth.


After an evil steals a child, it may take them to its lair. It feeds them a magical slurry that slowly transforms the child into a mutated, corrupted monster. The change is irreversible. 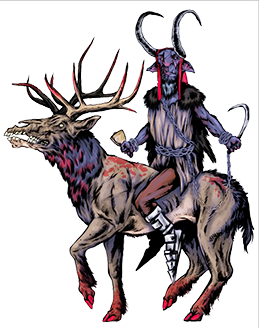 
Blood-Soaked Cap. Krampus dips its cap or coat in fresh blood (such as from a bleeding creature) as a bonus action, healing 10 (3d6) damage or gaining 1d6 temporary hit points.   Grisly Gift. As a bonus action, Krampus pulls a gift from its bag and presents it to one humanoid it can see within 30 feet. The target creature must succeed a DC 14 Wisdom saving throw or become charmed. The charmed creature uses its reaction to move up to its speed towards Krampus and take the proffered gift. The creature refuses to part with its gift under any circumstances. The charmed creature regards Krampus as a friend to be obeyed and protected. It accepts Krampus’s requests in the most favorable light possible. If Krampus or one of its allies inflicts harm to the charmed creature, it can repeat the Wisdom save, ending the charm on itself with a success. Otherwise, the charm lasts 24 hours or until Krampus dies. A creature succeeding at its Wisdom save sees the gift for what it truly is: a gnarled mass of hair, dried blood, and bone fragments twisted into a crude shape. That creature thereafter becomes immune to the Grisly Gift for the next 24 hours. Creatures immune to charm are immune to this power. Krampus can have up to three humanoid creatures charmed at one time, although creatures with a Wisdom score of 10 or less don’t count (i.e., children) against this limit. Krampus can release a creature from its charm as a bonus action or if it gives a gift to another creature in excess of its limit.   Iron-Shod Boots. Krampus suffers disadvantage on all Dexterity (Stealth) checks.   Magic Resistance. Krampus has advantage on saving throws against spells and other magical effects.   Squeeze. Krampus can move through any opening 1 foot or larger without squeezing.


This fey entity was once a hateful, bloodthirsty creature known as a redcap before swearing its service to Ninfa, the Great Witch of the Woods. Now, it serves as her messenger, enforcer, and collector of tribute. Krampus takes any insult against the crone personally, but at the same time he enjoys any opportunity to unleash his love of blood and violence.

This large, red speckled mushroom can be found growing in underground caves in the local area. The person who steeps this mushroom fruit body or spores in bark tea can see and hear anything the Krampus, or the wearer of the redcap, can see and hear. The imbiber must make a Constitution saving throw DC 14 or temporarily lose d2 points of Wisdom.   A single point of Wisdom can be recovered with each long rest. Magical means can also be used to restore these lost points per the spells description. 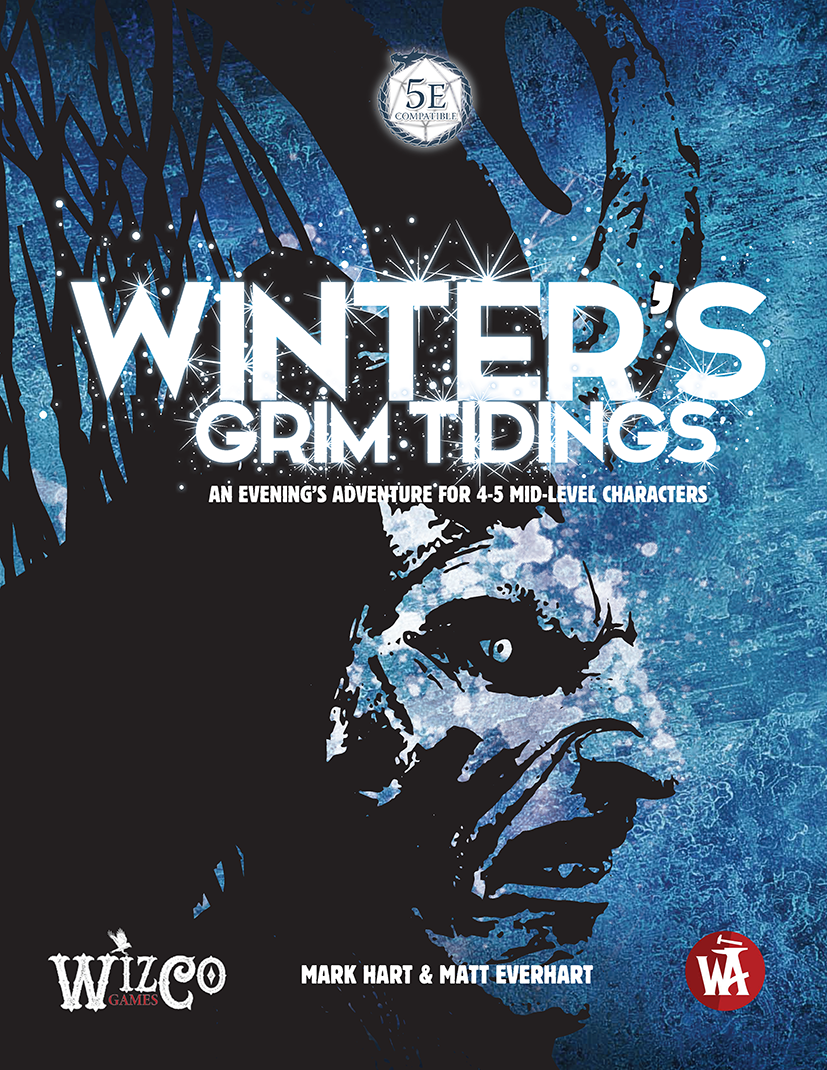 According to legend, the days surrounding the longest night of the year belonged to Jolfadr, the Yule-Father. Stories described how he, accompanied by the Great Hunt, scoured the lands of Baennor of the undead, evil spirits, and other fell monsters.   The Yuletide holiday lasted three days, culminating with a feast on the longest night to celebrate Jolfadr, who in turn bestowed his blessings upon those who feasted in his honor and respected traditions. Those who committed evil acts repented of their sins and offered penance to the Yule-Father out of fear that they, too, would run afoul of the Great Hunt.   The Winter's Grim Tidings is a one-shot adventure for 4 to 6 Players of 7th-9th levels.   Purchase: $2.99 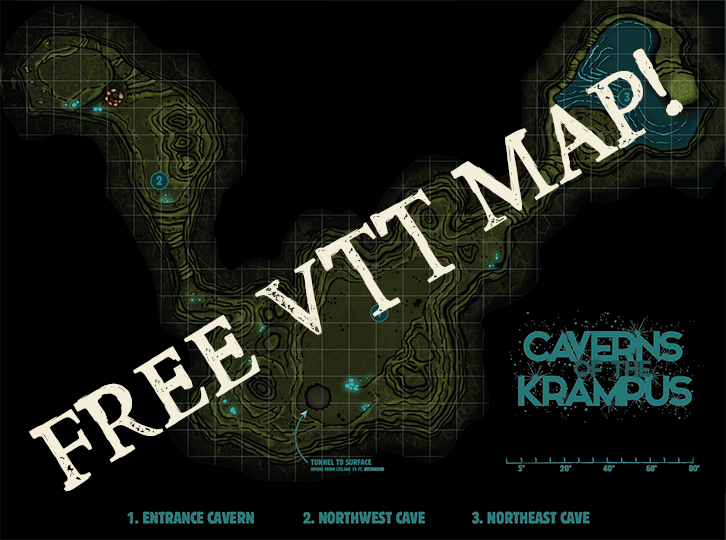 Upgrade to your FREE Virtual Tabletop Maps   Use this Digital Code at checkout: