Matron of the Lost, The Whisper Wind, Keeper of Waemylere, The Feathered Prophet, Foundling Mother

"A moment of indecency may follow a man all his life while bitter words and stares, like hammers and chisels, chip away at his value. Through ridicule, our purpose is lost in doubt, and our path obscured. It's not our place to judge, nor even to understand, but to accept; as quickly as we might judge others, we might find ourselves in their place."
— Mother Isilla 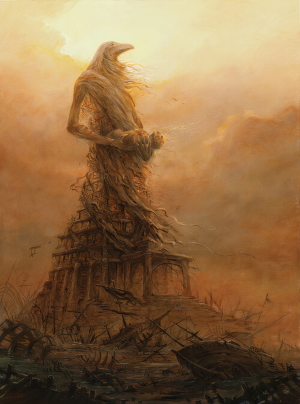 by Peter Mohrbacher
Aedwit is the Goddess of Clemency, Shame, Hope, and Blasphemy. Of the Noble Pantheon, She is the only Deity to side against the Divines and question their right to rule.
She usually represents rebellion against authority, finding one's own path, and sympathizing with those often misunderstood. On the fringes of Her worship, She may represent sacrilegious rituals, lonesome spirits, and twisting fate. She is a comfort to those who feel most alone, and is often followed by misfits, revolutionaries, and the most zealous and skeptical alike. While some see Her as a mothering figure, others do not trust Her and the strange Flock She flies.

Aedwit shares Her quiet compassion from the realm of desolation, Waemylere, a world marked by ruin and sand. Here, souls may wander in an eternal sandstorm, with oddly familiar ruins marking the world. They may also find respite in said ruins, discovering the company of other seemingly lost souls. The Goddess and Her Murder, the black-feathered crow-like angels that maintain and keep the ruins, occasionally visit these souls to chat. She solemnly watches over mortal affairs from here and listens to the most desperate of prayers.


Having dared to question the Gods, Aedwit has found Herself out of favor with most of them. She's since garnered a reputation as an untrustworthy figure, possibly traitorous in nature. This, coupled with sympathizing with other pariahs, results in Her worship often being looked down upon.

Small statues cut from sandstone show the Goddess with a raven's skull for a head (or headdress) emerging from a plume of dark feathers and long hair. She has thin features, tattered weather-worn clothes with unpolished jewelry, and a pensive stare. Her symbol is often a raven's skull, occasionally with a golden scale between the beak or set behind the skull.

It's believed She reaches out to those who need to hear Her voice, often speaking through ravens. The Goddess may encourage Her new followers to seek each other out, guiding those worthy to a member of Her Flock who holds the Black Book, commonly called Keepers. The book is purposely titled menacingly to sway the unfaithful and those too quick to judge. Inside, one will find Aedwit's teachings of compassion and empathy towards the most needy, moral guidelines for Her flock, and rituals and ceremonies practiced in times of strife.   Those who carry the Black Book have a deep and personal connection to their tome, as one may only obtain a copy through hard work and the trust of another of Her flock.


It is common for Her followers to have an idol of Her hidden away in their house somewhere, or to keep Her emblems under wraps. Since tattoos in some cultures are similarly disapproved of as Her worship, more dedicated followers are sometimes known to get crows or other iconography of Her tattooed on their chest to keep Her close to their heart. The most devout of Her flock will make no effort to hide their worship and will proudly face any scorn for doing so.

It's rare to find a temple to Aedwit, since Her worship itself is uncommon and Her teachings point Her flock elsewhere. It's most common to find shrines to Her standing alone off the side of an otherwise lonely road, holding offerings for the poor. Most of Her followers congregate naturally to where help is needed the most: battlefields, places stricken by disaster, poorhouses, and hospitals. Most of Her flock do charity work and help whomever they can, expecting nothing in return. Some followers pitch medical tents near villages ravaged by plague, helping the desperate and dying, while wearing bird-like masks to protect them against disease. Since their arrival is marked by pestilence, such doctors are often feared as an omen of death, and some would rather risk death than seek their aid.


1. Self-empowerment starts with humility. When challenged, assume you know nothing and put yourself in the shoes of others. Above all, listen.   3. Power is the strongest temptation to those who would misuse it. To trust those who lord over others is to let them lord over you. Stay true to the contents of your own heart.   5. Let your good deeds speak for themselves, for minds change quietly and heavy guilt weighs silent. Speak highly of yourself if you wish to undermine your work.
2. Medicine is the practice of compassion, and the tool often forgotten until needed most. Always be prepared to help, even those who refuse your aid.   4. Be a beacon of hope for the hopeless, a bastion for the weary, and a friend to those without any. Shoulder their burden and carry their consequence.   6. There is no righteous cause too small, no voice too little. If someone fears to speak out of retribution, use your voice to speak where they could not.

A young man known only as "Jiunzo" once traveled the lands of the far south on an unusual journey. To those he met along the way, he explained he was following a melody he had faintly heard all his life; a lone flute, whispering to him on the wind. He'd traveled far from his hometown of Mitsubo, and planned to go as far as the music would take him, eagerly claiming as he traveled, "I'm getting closer, y'know! It's getting louder!"   The last time he was seen, he was preparing to trudge through the Great Marshes, excitedly sharing that he was "... almost there!" After that, his story ends mysteriously as he was never seen again. Some say he was charmed by a devil since birth, others claim a spirit he'd known in another life called to him. Since his disappearance, just every now and then, someone else claims to hear a lonesome melody carried by the wind.

Kenkus are believed to be souls who deeply sinned during their beforelife in Waemylere, attracting the ire of the Goddess. They are a cursed raven-people, who may never speak freely, forced to speak only through mimicry. They must listen carefully to what others say and judiciously craft their own sentences. Their lives are thought to be a form of penance and, once over, they will return to Waemylere to receive Aedwit's final judgement.   Despite the theme of repentance, kenkus are most commonly known as spies, prophets of doom, and thieves. The Dark Prophets of the North are a notable sect of kenkus who caw the same speeches every day in the frigid snow, eager to spread the word of the coming apocalypse. There's the occasional rumor of an intricate network of kenku spies, helmed by a wealthy man in the Golden Sands. Talon is a surprisingly large and active gang of kenkus, thought to be rooted somewhere past the Red River.

Somewhere in the history of the Darmera Kingdom ruled a baron known for extravagant wealth and a love for malicious gossip. He spent most of his days with other nobles in his lavish garden, spreading rumors of his subjects and speaking ill of his colleagues. One evening, a curious raven perched silently in a tree nearby and seemed to stay to listen. The Lord thought nothing of it, until it spoke aloud and mimicked his own cruel words and flew away, towards the rest of the town. Before too long, all knew the contempt he held for them and even peasants would turn their nose up at the sight of him.   Instead of learning his lesson, the baron grew even more bitter, stubborn to the day where he was old and on his deathbed. Wheezing and labored, he had called to his family, who did not answer. Groaning in pain, he rang for his servants, who did not come. Gripping his sheets, he called out to anyone who could hear him, when a raven flew threw the window and sat at the end of his bed. The lord scowled, expecting mockery as he had received before.   The raven, as quiet and dark as night, kept the man company as he passed into his next life.

In some cultures, a lone flute is seen as a spiritual instrument.   In Mukano, flutes are believed to either attract spirits or to signal their arrival. Guan are thought to be lost spirits who wander aimlessly and play a somber melody on a bamboo flute. They visit houses in the night while playing their song, often standing right outside the front door as if waiting to be invited in.   In the east of Mukano, inviting the Guan in and showing them hospitality is believed to grant the head of the house a great boon. Failing to invite the spirit in means a cherished valuable will go missing the next morning. The west, however, believes the Guan to be a vengeful spirit who, once inside, will make increasingly unreasonable demands of their hosts. Once their demands are not met, they will fly into a rage and curse the head of the house. Having a raven's skull somewhere near the front door is said to ward against their anger.   Beggars have been known to dress as Guan and play flutes at night, posing as the wayward spirit. Because of this, it is speculated by some that Guan are mere myth, only beggars in disguise trying to earn a free meal.

Avatars are the chosen champion of the Gods and may act on their behalf. They serve as a manifestation of a God's will and are capable of performing miracles. 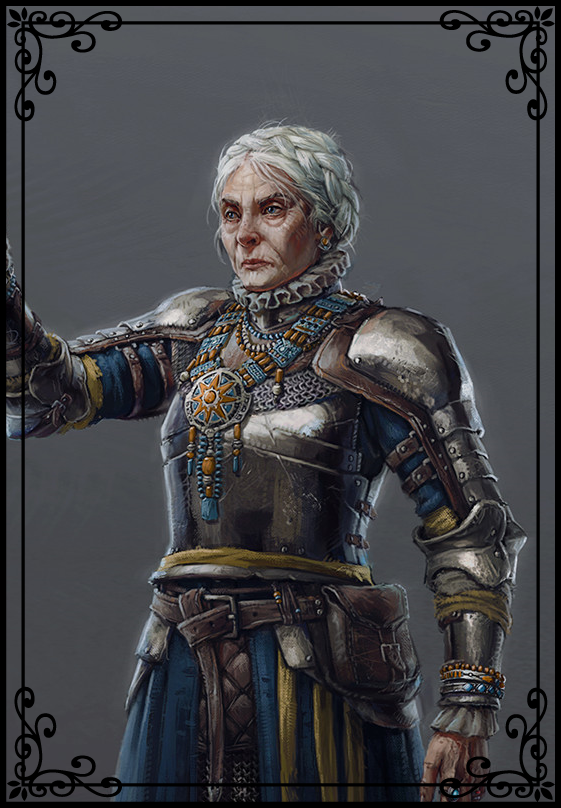 by Filipe Augusto
Founder of the Order of The Silver Sun, a militia of female knights dedicated to "keeping bad men from letting good men die", Lady Vinnia Austrance has been a stalwart beacon of hope for many women in Santolina and across the globe. After the Wars of Silver left many countries suffering, she called arms to women robbed of their men: widows, mothers, daughters, and sisters.   Together, they rallied to successfully threaten those who sent their soldiers to battle, forcing nobles towards diplomacy and away from needless violence. Decades later, the Order of The Silver Sun is as strong as ever and serves as a powerful reminder to those in charge the true cost of war.

"What? Your pride is a little wounded because he called you weak? Be glad that jackass is underestimating you, he's handed you an advantage on a silver platter. He'll be all the easier to topple."
— Lady Austrance


The Order of The Silver Sun is funded by many different countries in exchange for diplomatic representatives and pro- tection. A portion of this money is spent on many charities across the land, with a focus on empowering women.   It is believed that their core value of beneficence gained the attention of Aedwit. It is proclaimed widely by The Silver Sun that their leader has a very close relationship with the Goddess and has since become Her chosen, though not all take this as truth.