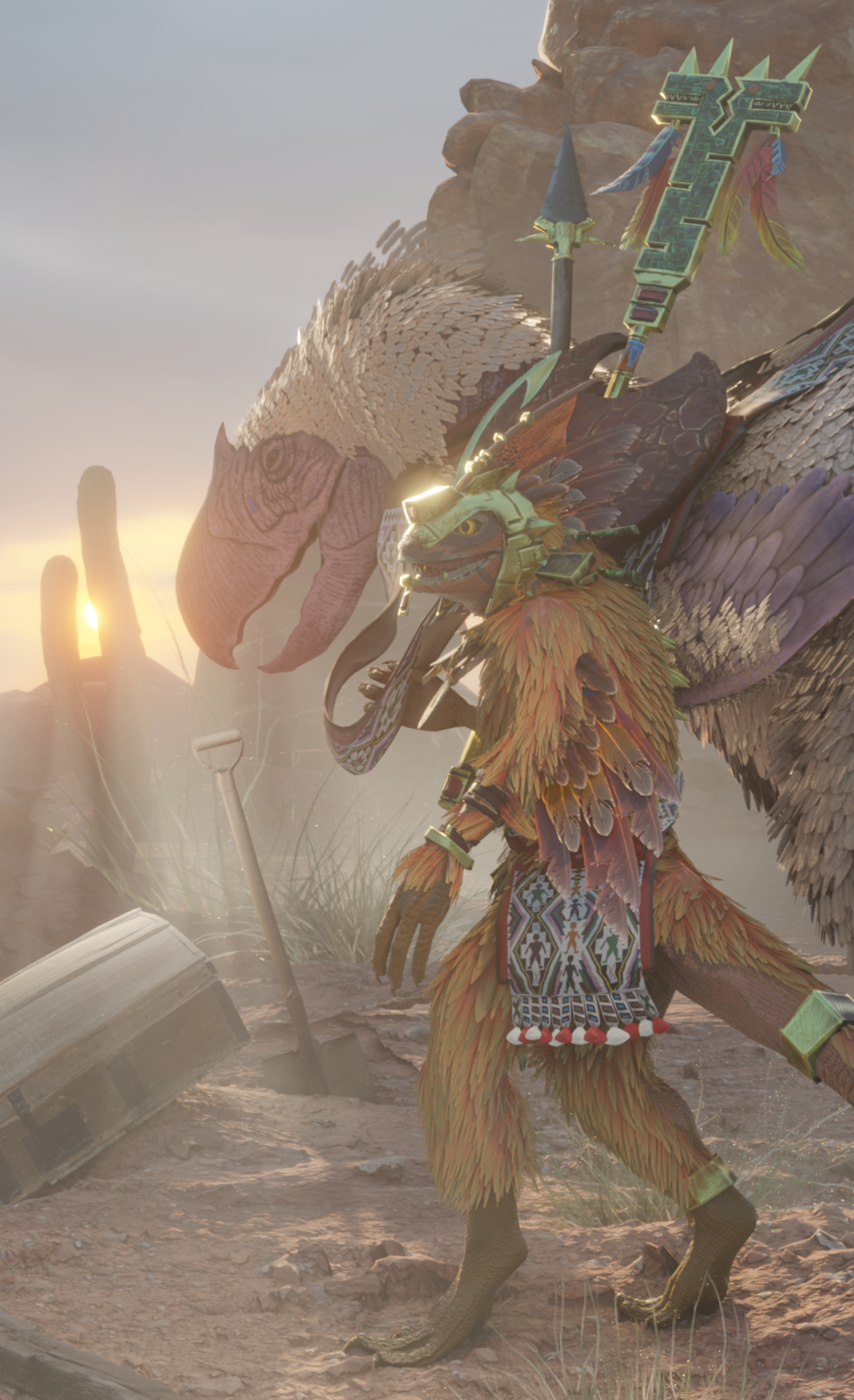 The Rangos, or Saurios as they are known as to most settlers in the West, are the remnants of the great power that once ruled all across the southern continent of Lustria. The first race to be born into the world, they were once a mighty and unified force that served their ancient gods, the Old Ones, with impunity and dedication.   Originally their Temple Cities was managed by four different subspecies - the amphibian Slann governed the cities through the divined will of the Old Ones, the Saurus provided the military might, the Kroxigor performed heavy-duty labour and the Skinks oversaw everything in between. Then the remaining Slann perished, and with them went both the sorcerous links that united the Temple Cities as one and the last means to call upon the Old Ones' guidance. Nowadays the Rangos either eke out a living in the ruins of their ancient cities, or make a living in the towns of men, Elves and Dwarfs to the north. Because of their reptilian nature it is easy for a Rango to stand out in a crowd, and they often make easy targets for outlaw gangs or Goldmann's thugs. Therefore, in times where it is required, the Rangos often band together in Companies, whether to strike back at some bullying warm-bloods, or to seek out a lost treasure of the Old Ones.
Rango Companies are usually led by a Skink Priest, one of those Skinks unusually gifted in the art of magic, though whose skills are a mere fraction of the abilities of the now-departed Slann. He will be protected by a bodyguard of Saurus Warriors, hulking reptilian humanoids that are brutally dangerous even when unarmed. In amidst the Company will . Though diminutive individually, Skinks are the most numerous of the four Lizardman species, and their ability to tame the creatures of the Lustrian jungle means one or two Razordons or Salamanders can often be brought as living artillery. In addition, they possess the greatest ingenuity, and are the only Rangos to have partially embraced the Western lifestyle, being capable of using firearms and riding on Culchans, an avian predator found across the desert, in the way humans ride horses. Finally there are the Kroxigors, towering crocodilian cousins of the Skinks who wield giant stone maces that can pulverise a man-sized creature in an instant. Spawnings of these have grown rarer and rarer in number in recent years, and thus it is rare for more than one to be seen in a small raiding party.   Figure: Skink Priest
Pluck: 4+
FV: +1
SV: +2
Speed: +1
Cost: 46 + Powers
Talents/Powers: Fearless, Leadership +2, Intuitive, Inspirational, up to 20 points of Mystical Powers
Equipment: Sacrificial Dagger (Fighting Knife), Priest’s Staff (Quarterstaff)