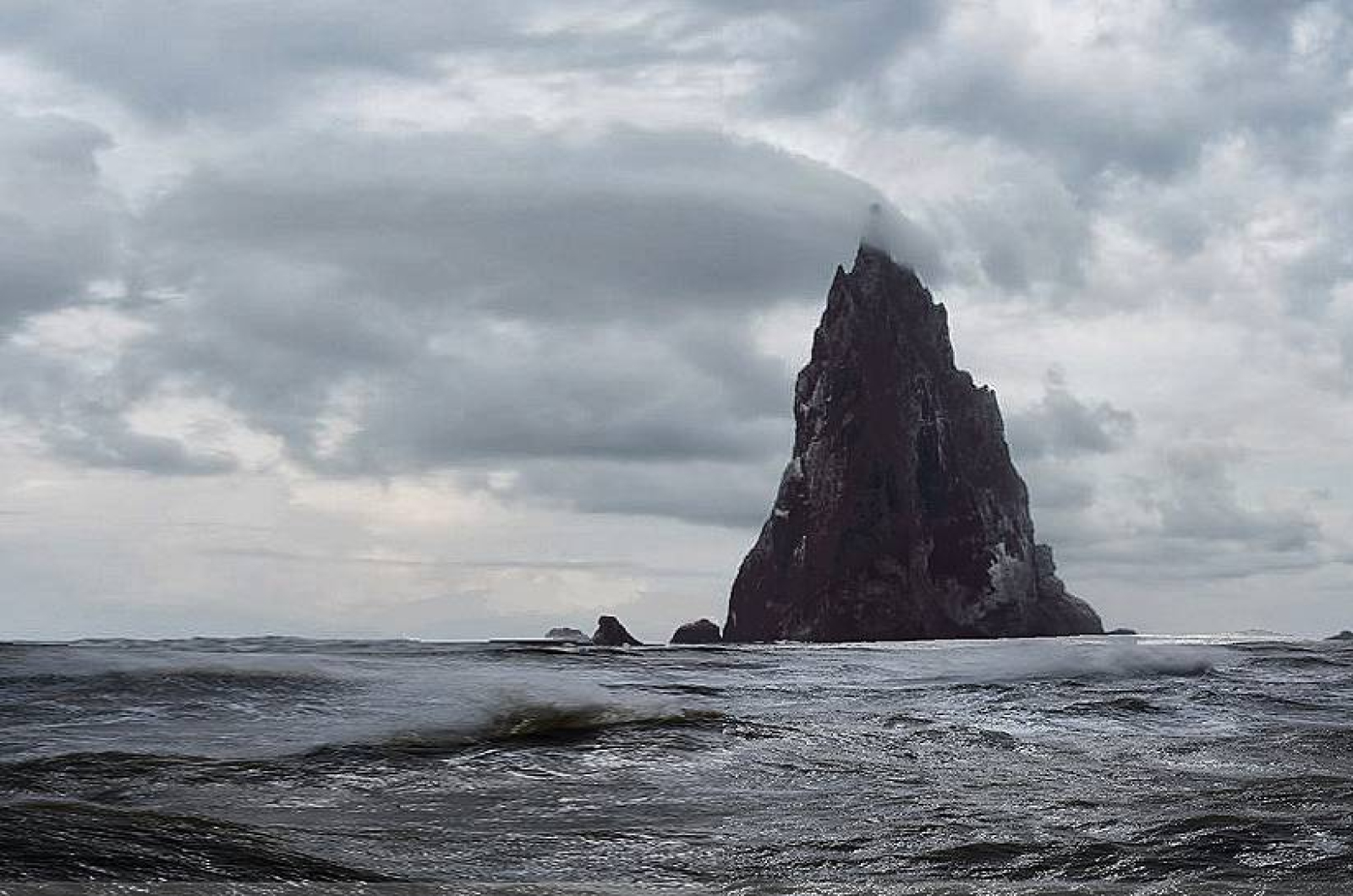 Castle Rock of the Siren Isles

In the wide sea between the sunny shores of the southern isles, the busy straights of Nhym and the grand lighthouse of Dawn lies a doom that every seaman has learned to dread. Lost amidst the tides and veiled in fog, lays the earthly domain of the arch-Siren Leucosia: the aspirant arch-fae who is death to sailors and mistress of the undeniable song. The siren isles are a small archipelago of sandy bluffs and rocky crags ringed by great stone reefs. This maw of earthen teeth has chewed to kindling uncounted ships, drawn in to the last by the lure of the Siren's song. At the heart of these isles lays the cruel fae's citadel: Castle Rock. A great spire of natural stone which juts from the frothing surf like the talon of some drowned titanic raptor. Amidst the caves which honeycomb the spire's interior, the Siren makes her lair, and from this nexus of her power woe befalls the sea. 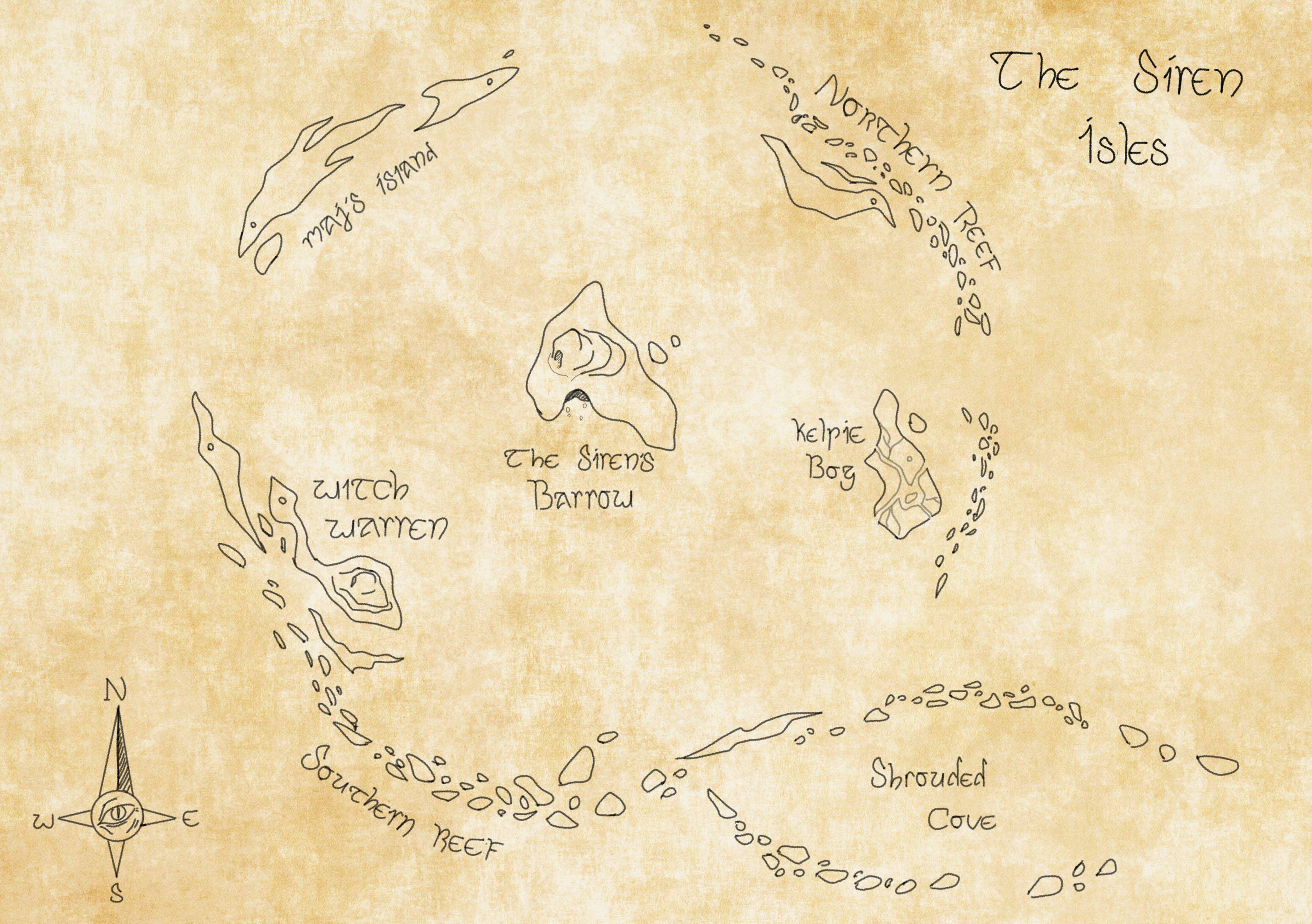 The legacy of these mist wrapped isles and the citadel at its heart is veiled in annuls of ancient history. Its mistress is of the fae, and by this merit, older than the dawn of the black sun, which sang into being the end of the last world and the beginning of our own. None can be certain as to when these isles came under leucosia's rule, for no written history reaches back into such primordial depths. However, if you were to entreat one of the pixies or dour nixies that flit about in Leucosia's grand gallery, you may hear rumor of a game of chance between a beguiling young Siren and Arcadia, mother of sand. Specifics of by-gone events rarely stick in the minds of such spritely fae, but the results of this gamble are plane to see. Leucosia had won her prized isles long before the first elves emerged from the primeval under-dark, and she intends to keep her prize long after the final sun sets.

Castle Rock, the citadel at the heart of Leucosia's mortal realm is a fortress to be envied by any lord. The island is surrounded on all sides by sheer cliffs that rise five hundred spans into the air, save for a single gravel strewn beach on the eastern shore. From this beach, a long snaking trail winds its way about the spire, until finally reaching the mouth of a high cave which grants entrance into the tunnels within. Along this path, silent draugr stand sentinel. These damned sailors, whose souls have been long ensorceled by the spire's mistress, watch the ashen sea without rest and promise doom to those who would intrude on their mistresses domain. Bellow their silent vigil, a cove warn into the southern shore of the islands constitutes the Stygian pits where these dark creatures are birthed. In the shade of this watery maw, Leucosia entreats an elder magic to bind these captured souls into the piteous watery husks of her garrison.   Within the stone of Castle Rock are the caves where Leucosia makes her home. A mix of natural caverns and pixie carved chambers compose the estate, which boasts a number of curious rooms and galleries. One is a long tunnel strewn with stalagmites, which have all been inlaid with intricate scenes of fae folklore. Another is a wide cavern filled with singing crystal, and a rumbling waterfall with no earthly source. A third is a comfortably appointed foyer, complete with fine rugs, elegant divans, and the petrified bodies of Leucosia's favorite mortal pets. These rooms and many others comprise the earthly manse where the siren entertains guests. Though, more often then not, it is the guests which are the entertainment.

The lowly drougr are not permitted into the hallowed tunnels of Castle Rock, but the siren's halls are far from unprotected. Leucosia's lair hosts a number of magical curiosities and defenses. Enchantments which would inspire the spells modern man knows as Haifzur's many-fold curtain of ineffability and Agrippa's unending hall of bewilderment guard the spire's true treasures, while cruel decoys spell doom for those guileless enough to fall for them. The spire is the home of an aspirant to the arch-fae, and as such is filled with illusion and cruel jokes for any unwanted guests. One such jape, A hoard of gold and gems in a deep inner chamber, is guarded by living suits of armor, whose intimidating statute is betrayed by flimsy construction. The treasure trove within is a king's ransom, but is inevitably the death of any who seek to plunder it.   What appear to be gems are in fact a clutch of mimic larvae, while the gold coins are possessed of sundry dooms. Some are coated in the potent pheromones of the red dragon, and will be an irresistible draw to any red-blooded creature within 20 leagues. Another mintage bears the mark of the crestfallen prince, whose likeness printed on the coins induces a near suicidal malaise in those who gaze upon him for too long. The largest connection of coins are plunder from spiteful fae, some from a leprechaun, a few from a greedy redcap, another from the brood mother of the faerie dragons. Each of these fae would go to any length to recovered their pilfered treasures, save cross the siren herself. Removing these coins from Leucosia's protection invariably compels their previous owners to make an attempt to reclaim their stolen goods... with interest. On top of these are crystal blades that shatter at inconvenient moments, statues of silver that melt in the sun and rods of blue concentrate which are prone to backfire. By design, not a terse of these treasures bear magic. Even the most paranoid of wizards could confirm that no arcane curse has been placed on this hoard. Unfortunately for them, no curse is needed.

The most curious magic to be found within castle rock are the Siren's standing stones. The artifacts themselves are unassuming: trunk-like basalt columns carved with effigies of sundry fae. Their magic is subtle, as are all the ways through the realm of faerie. Circling these stones thrice in a diesel fashion reveals their enchantment, for on the third revolution the wanderer does not find themselves standing before the original stone, but before its twin, which could have been placed anywhere in the multiverse. The siren's citadel contains many such gateways, some of which lead to the scattered beaches of the siren isles, and others to more distant locals. One stone leads to a craggy island where a coven of sea hags work their diabolisms in the shade of castle rock. Another has a twin on the stone reefs, where a choir of selkies sing to seduce sailors to a watery grave. A third leads a low marshy strand where a languid kelpie sunbathes with her collection of mortal teeth. A fourth hides the level islands where Leucosia stashes the handsome manling bards she keeps as pets.   Beyond these locals in the mortal world, one such stone leads to the sunless sea, a great and wild expanse of the faerie realm. This gate to faerie proper is held in the chamber of the singing crystal, and is guarded by a red cap which Leucosia has slaved to her service. Arch fae, from Arcadia of the sands to the Doe herself, have sent servants to infiltrate the sirens lair through this gate. Neither have known success.   The last stone, Leucosia's most guarded gateway, sits at the end of an infinite hallway. This final gate leads to the siren's denizen in deepest faerie; an inner sanctum coveted by man and fae alike, but an enigma to all.

The siren isles have scored a deep impression into the minds of the sailors who ply their trade along the gilded coast. The oceans are rife with sea devils and dooms without number, but few have had such an impression as mist and the rocks of Leucosia's domain. Those who escape a grave on the reefs return with tales of impenetrable mist and the lure of a weeping song. Those who venture deep enough to spy the citadel of Castle Rock, do not return at all.