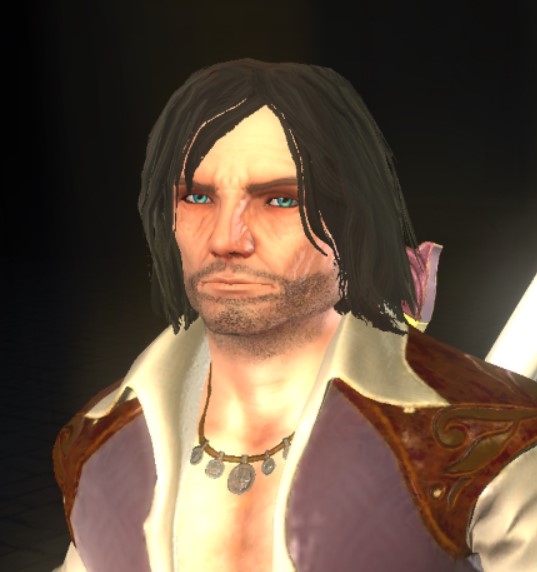 "They say I'm getting too old for love, it's true,
But I know that I struck gold when I found you."   ---Marko Guru 'Struck Gold'

The years have been less than kind to Marko Guru. Since the spotlight left him years ago, the lines on his face have deepened, his graying hair thinned further, and his fingers curled inwards ever so slightly more each day. The days of glory long behind him, all he has left are the memories, the scars, and the lingering effects of years of sex, drugs, and rock & roll. However, Marko is still believes that the right stage is being set and his adoring fans are waiting for him, chanting his name with wild passion. The lights are set just right, the instruments all in tune, and the groupies are young, dumb and beautiful, and one day, he’d going to walk out in front of the people and reclaim his title as a god of music.

"It'll leave you blind
And your fingers numb,
A bitter aftertaste
On back of your tongue.
It burns your throat,
It'll cut like a knife.
Yeah, love is like moonshine;
It'll ruin your life.   ---Marko Guru 'Moonshine'

As the founder and frontman of Hoarfrost, Marko Guru and his rhythm lute came up in the industry the hard way, learning his craft in the clubs and dirty bars of various cities and towns, trying with all his might to find the right gig that would shoot him to stardom. Years spent with his bandmates – Yent Ingram (lead lute), Oribal McRellan (piano), and Turi “Tarrasque” Bo (drums) – formed a bond stronger than blood, and they gave everything they had in every performance. Despite years of struggle, they failed to achieve the success they dreamed of. That was until “Struck Gold.” The bands first power ballad and to this day their most popular tune, “Struck Gold” was the crowd pleasing anthem that got Hoarfrost the attention that they dreamed of. In a whirlwind of gold, contracts and tour schedules, Hoarfrost were catapulted from obscurity to the big time, becoming household names practically overnight. Where their previous in the basements of dingy taverns attracted little more than a handful of people, aside from the regular crew of drunks and lay-abouts that made their homes there already, their arena shows and concerts now attracted fans by the thousands. Some of their events were so large that people would pay four tot five times the asking ticket price just to get in, while others of less financial ability would crowd the outside of the venue just to hear their favorite song. Some say that this was where Marko started to lose his grip. The stress of living on the road constantly hunting for gigs only to take in pocket change was replaced with the stress that gold, women and narcotics place on the mind and soul. Performing contracts ensured the money and drugs kept rolling in, but they also kept Marko tied to his quill and paper writing new songs, desperately trying to repeat the commercial success of “Struck Gold.” However, nothing ever quite came close, and the disappointment that Marko felt became a knot within his heart that grew with every subpar note and insipid lyric. The problem was that the songs weren’t him. Despite being a crowd favorite and an epic tune that has been covered by many musicians since, “Struck Gold” wasn’t his style, and Marko desperately wanted to his work to reflect the anger and anti-establishment sentiment that Hoarfrost were founded on. He was an artist, not just a performer, and was getting tired of being the dancing monkey he saw himself as. Since his bandmates were too busy enjoying the frivolities that fame brought them to care about Marko’s feelings, his frustration continued to grow, until he was closer friends with the bottles of booze than the musicians he had spend so many difficult years beside.

The day Utopia burned was immediately infamous as one of the greatest tragedies ever to occur in the music business. 87 people had been confirmed to die in the disaster, including all three other members of Hoarfrost. Several others were severely injured by flames, falling debris and smoke inhalation. By the time emergency services had arrived to put out the fire and treat the wounded, Marko Guru was nowhere to be seen. Since that fateful day, Marko has been plagued by the guilt of his misdeeds every waking moment. He turned back to the drink, but found that every drop evaporated from his throat as soon as the bottle touched his lips. Washed-up, alone and terrified of his own craft, Marko resolved to never touch his lute again. This proved easier said than done. He first tried to throw it in a river, but found it lying against his pillow when he returned to his caravan. Next he built a small bonfire of his writings and possessions, hoping to start a new life with a new identity, placing Fehn’Darr a top the pile, only to see the wood warp into weird grinning shapes yet never break, while the strings chucked gently throughout. He tried cutting the stings, but every blade dulled to nothing as soon as they touched. Even bludgeoning the wood with rocks left not a single scratch on its finely crafted form. Reluctantly, Marko carries the impervious instrument to this day, yet solemnly refuses to play even a single note upon it for fear of the damage it may yet be capable of. Instead, he has turned to the first instrument he ever mastered, the triangle. Now he travels alone in search of a reprieve from the terrible weapon he carries upon his back, desperate for a fresh start and an opportunity to recapture the beauty of the music he once wrote.
Age
57
Children
Presented Sex
Male
Eyes
Pale blue
Hair
Shoulder length, heavily greying black hair, adorned with beads and trinkets
Skin Tone/Pigmentation
Lightly tanned and heavily wrinkled
Height
5'9"
Weight
147lbs

Talked about the formatting stuff over on discord, so i wont go into that here. A good list or resources for character art is https://blog.worldanvil.com/2020/11/19/5-best-character-portraits-resources/ A lot of people have used either heroforge or art breeder for their character pictures for this challenge, and both are free to use.   You did a good job capturing the feel of a rock band who rose to fame to fast. There is some ambiguity in the writing as to your worlds age. Is it medieval fantasy (lutes and taverns) or more modern fantasy (arena concerts, bars and clubs) At least the arena concerts would require some form of magical or electrical amplification.   A very good take on a "deal with the devil" trope, and I like that the story leaves off before his death, leaving the possibility open for him to try to find salvation.

Thanks for the feedback!   In answer to the question of Era, the answer is sort of yes to both. The world I'm creating blends magic, science and technology to the point where they are nearly indistinguishable from one another. Since the world is being used as a setting for an RPG game I'm running, I want to keep it as open as possible.

Fascinating story! Such a shame he finally managed to make amazing music when the curse took hold :( You wrote very well Marko's slow descent to hell and his frame of mind during all of that...   Did people try to hunt down the creature after the incident? Or is there a warrant of arrest for Marko? If some people survived, I imagine the story of what exactly happened spread.   Like other have said on discord, I'd advise you to use more paragraph breaks, as beyond a few lines big paragraph are very difficult to read on computer screen

And yes, don't forget to submit the article to the challenge! :D

Nice read! Was truly interesting to read how he got that magical instrument and how in the end it would also prove to be his downfall. Still wondering in what type of technological era this all takes place. I also wonder if he was not arrested or sought after killing so many people, I can imagine some eye witnesses survived?   As for layout some pieces have very long text so you could try to divide that up a little :)

The storyline is great! I could really believe Marko's progression. As others have pointed out - some more fine tuning on the paragraphs, just breaking up the text flow and a bit of cleanup - and you have a very well done article.

A really gripping, grippingly written story with a whole lot of emotion, be it his despair about the music, the wordlessness after being kicked out of the group, the horror at the last big concert. And so completely fitting with the Bard theme when the Bard is about music. Well, at least I always associate music with emotions and they come across well.   It would have been nice to have more paragraphs and short quotations, a bit more around the character apart from the story, to make it even more attractive, to round it off, but: The story stands and that's the main thing. And the Triangle as a conclusion is just brilliant.