Peacekeeper armor is a type of heavy armor worn by the Peacekeepers of the Joint Nomad Fleet, an elite special forces unit employed in a wide range of activities and with a significant level of autonomy and authority when dealing with members of other species and factions.

Moira felt a shiver run down her spine. She had heard of the Peacekeepers, their 'frontline diplomats' as they called them — spec ops with the authority to negotiate treaties and the skill to annihilate armies.
— The Demon Star

While the basic armor design doesn't vary much, it's usually augmented to suit different types of assignments and the wearer's preferences. 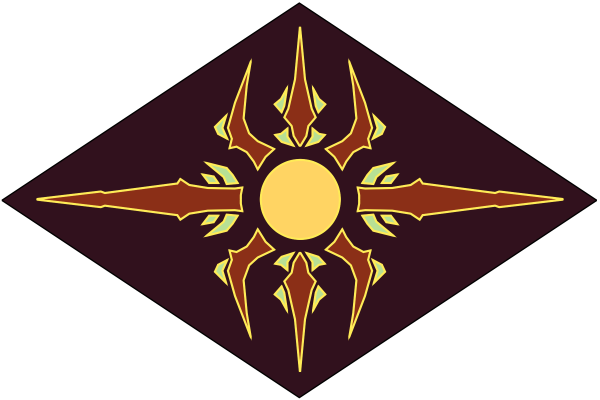 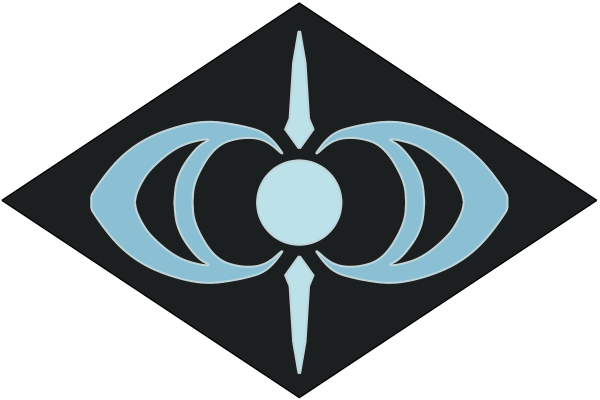 Dead Sun Insignia by spacetrash
Alliance and faction insignias as they appear on the right pauldron.

The base color of the armor is black or dark gray with a bluish, purplish or reddish tinge.   The highlights vary by the Peacekeeper's affiliation. Each wears the colors of the alliance their swarm belongs to, such as the Chimera Cabal, Plaguestar League or Silent Concord.   Members of non-allied swarms wear the colors of the larger faction their swarm is affiliated with, ie. the Blackreach Pact, Dead Sun Alliance or Wayward Coalition.   The Peacekeeper insignia are displayed on front of the helmet and on the belt buckle.   Swarm alliance or faction insignia are displayed on the right pauldron and specialist insignia (if any) on the left.   Insignia also vary in color based on affiliation.
Find a term you're not familiar with?
Check out the Glossary! 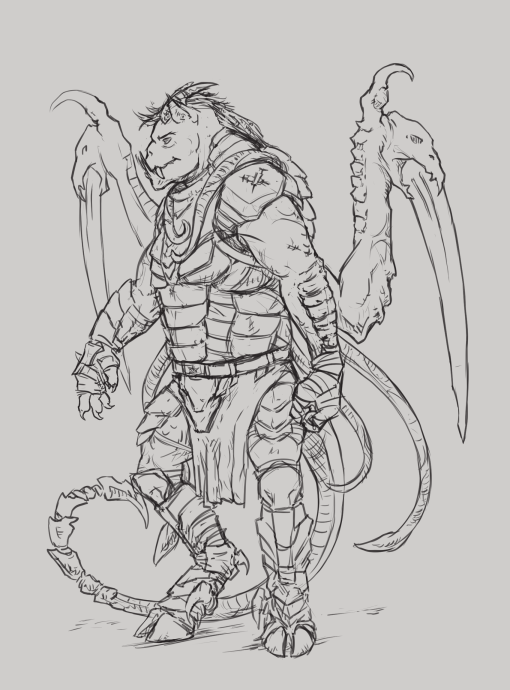 Remove these ads. Join the Worldbuilders Guild
Peacekeeper armor didn't change much over time. Materials were improved and small adjustments to overall design made, but modern 5XV armors still look essentially the same as those from the Last Age.

Peacekeeper armor has several layers. The inner layer consists of a pair of stab-proof trousers and a shock-absorbing vest. While not bullet-proof, the vest is designed to further spread out the shockwaves of center mass hits, reducing the chance of bruising and fractures at the point of impact.   Other parts of the inner layer are a pair of fingerless gloves and mag boots.   The outer layer consists of composite plate armor covering the torso, part of the upper arms and wings, the front of the thighs, and the forearms, lower legs, back of the hands and top of the feet.   The helmet covers the head and upper part of the face, though a variant covering the entire face also exists, but is rarely used except when using SLERA plates to augment the body armor.

The armor is made of non-energetic reactive armor (NERA) plates. They're thinner than the same type of armor used on tanks and APCs, but can stop lighter anti-vehicle ammunition.   NERA plates are a type of composite armor consisting of a layer of non-metallic elastic material sandwiched between two metal plates. The elastic layer breaks up the shockwave, thus lessening the force of impact. The plates are angled and overlap to provide to further slow down incoming ordnance, giving the armor its scale-like appearance.   In spite of the shock-absorbing vest worn under the armor, NERA armor is not recommend for use by people not trained and augmented to withstand the kinds of impacts it's designed for.   In combination with the voidbrood's natural armor, subdermal silicon-carbide scales (itself a common material used in amor plating), Peacekeeper armor is very effective against railgun rounds, RPGs and missiles.

The torso armor, and front part in particular, can be augmented with self-limiting explosive reactive armor (SLERA) plates. Designed in the same way to NERA armor, these plates contain a high-explosive layer at the center.   When hit by a sufficiently powerful projectile, part of the explosive ignites, deflecting and disrupting the projectile. The plates are designed to limit the explosion to the area around the impact, both to provide ongoing protection, and to reduce the risk to the wearer.   Peacekeepers only use SLERA plates when they expect to run into serious trouble.

Xyr attention was on the tactical HUD, the map overlay pulled down across xyr field of vision.   In the background, the slaved AI plotted routes off street level, synchronizing pathways with GPS from the drones scouting ahead, updating target information with fresh data relayed by the Warranty Void parked outside city limits.
— Voidbrood: Escalation

The helmet includes a number of sensors that mimic the voidbrood's own senses and improve on some of them.

Health, equipment and opponent statuses, maps and other useful information are displayed on the HUD, either projected onto the helmet visor or via the virtual retina display.

Peacekeepers often use a personal deflector shield. The generator is mounted on one forearm, and the armor includes the necessary mounts for it.   It's powered by the armor's pair of Po-210 SRGs, which also provide power for the weapons.

Besides the SRGs, the armor also has a kinetic battery charger used to keep helmet display, sensors and comm systems, and mag boots charged. 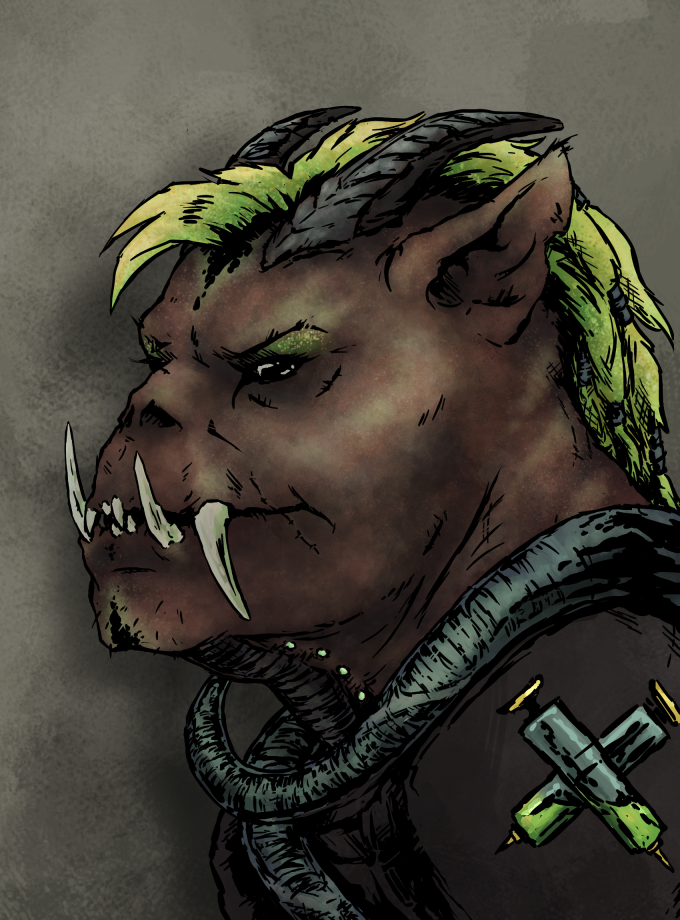 The armor is considered the personal property of the Peacekeeper, but it can't be given to anyone, not even a fellow Peacekeeper.   Retired Peacekeepers usually keep their armor, though they're no longer allowed to wear it outside ceremonies.   It's up to the unit to decide what to do with a Peacekeeper's armor upon their death. Most are disassembled and recycled just as any military equipment no longer in use.   A few suits of armor once belonging to Peacekeepers who earned themselves a worthy reputation are kept as part of the unit's history.

Voidbrood are hard to kill, but it's not impossible, and from time to time, a Peacekeeper is killed in action. If there's enough left of their armor, the victor may be inclined to take it, and they might get away with it.   If other members of the JNF find them wearing the armor however, there will be hell to pay. Not for killing one of their own, but for stealing from them. There's nothing particular or secret about the technology used for the armor that would make it worth taking back, but it's a matter of honor for the JNF to reclaim it.
Body Armor

Unless stated otherwise, the original content is by spacetrash and licensed under a
Creative Commons Attribution-ShareAlike 4.0 International License.
To the extent possible under law, spacetrash has waived all copyright and related or neighboring rights to hir conlangs,
and released them into the public domain by means of the Creative Commons CC0 license.
It is hir belief that a language, fictional or otherwise, is a means of communication and as such its use cannot be restricted by copyrights.   Third-party content belongs to its respective owners and may be subject to different licenses.
Unless stated otherwise, NASA images are in the public domain, ESA images are under the ESA standard licence,
and both ESA/Hubble and ESO images are licensed under a Creative Commons Attribution 4.0 International License.   Star system maps and celestial bodies created in Universe Sandbox2. World and region maps created in Wonderdraft.
Diagrams and flowcharts created in draw.io.
Conlangs created with the help of VulgarLang and ConWorkShop.

This article was originally written for a challenge. You can find past and current community challenges here.
(Y'all plz stop liking this, I put no effort into this article, it's not even particularly interesting, I'm just here for the participation badge.)
Please Login in order to comment!

"Frontline Diplomats" is a great and amusing term, and I really like that. A good, detailed article. :)   Some notes and questions:   Some of the article seems kind of fragmented, with loose sentences here and there. i.e

Instead of being part of the paragraph, it kind of sits there on its own. It happens a few times, and it kind of works against building up a nice reading flow.   Similarly this sentence:

Seems a little orphaned, without any additional details or anything like that :)   Question:   What happens if someone else finds a Peacekeeper armor or uses them? Are there any attempts by their enemies or third parties to reverse-engineer them or create counters? If a Peacekeeper dies and someone loots their armor, what's the response?   Nicely done!
Creator of Araea, Megacorpolis, and many others.   Current challenge article: ...

Glad you like!   Yeah, the loose sentences is me running out of ideas what to say, gonna have to fix that eventually.   As for found armor, good question, gonna update the article for that. Thanks!

This was great! ... if you dont plan to add anyhting more to the sidebar, your should move the rest of the article from Components on down to the full width footer section. This will fill in that long line of space. To do this you would have to not use the sections of the template prompt.

Good idea, I keep forgetting the full-width footer exists. Thanks!

Great article! I love the "science" aspect explaining how the plates work.   "frontline diplomats" XD   I'm not sure if you've forgotten the "NERA plates" subheader in the "Materials" section, as it could work both with and without it, so I'm mentioning it just in case.   How do other people react to seeing someone wearing the armour? I imagine they are rather impressed/fearful but that's something you could add. Also you mention at the end that there is no secret technology in the armour, but I'd like to know if the different elements are rather standards to all military groups or reserved to countries who have state-of-the-art technology or lots of money to throw at the equipment.

Thanks!   To answer your question since I prob won't do so in the article (I'll eventually add links to the materials used when I get around to it), it's all pretty standard stuff all over Terran Space. What sets is apart is the deflector shield and the type of SRG used, and the wearer is usually more impressive than the armor, tho I might add a small section on customization to address some variants.

What a great article! Lovely art and you explained every aspect of the armor very well. And 'frontline diplomats' is such a great term :p Does the regular armor without the additional gear need a battery pack as well in order to deflect?

Thanks!   Yeah, shields don't work without an SRG or similar power source.