A0620-00 is a black hole binary in the constellation Monoceros. It was settled by the Plaguestar League in 1380 TCE, nearly a thousand years prior to the first Trailblazer to arrive in the Sol system. While thus technically under Joint Nomad Fleet (JNF) control, its loyalty is uncertain.   The system has no jumpgate, as large JNF ships are all FTL-capable. Together with its great distance to the nearest inhabited system, that makes is almost inaccessible to other factions within reasonable timeframes.

At the center of the system is a black hole of about 6.6 solar masses, orbited closely by an orange star. The black hole's gravity has pulled the star into an ellipsoid shape, and draws matter from it, creating a bright accretion disk.   Matter from the disk falling into the black hole causes x-ray bursts approximately every 60 Terran years.   Map of A0260-00 by Konstantin M., created in Universe Sandbox2

At a distance of around one parsec from Sol, the light from the system reaching Terran Space in the 40th century dates back to before the JNF's arrival, making it appear uninhabited.   If Terran ships were to stray near the system, they wouldn't pick up much radio chatter either, as the JNF limits radio communication to low-energy short-range use whenever possible.   While the Dyson rings are not large enough to block significant amounts of starlight, the waste heat from the various megastructures present in the system would be quite easily identifiable as both artificial and in operation even from a distance.

The only permanent settlement in the system is the drift station JNFS Plaguestar Rising (PSR). It's a small outpost by JNF standards, but an important stopover point for ships in the area.   Like all drifts, PSR consists of an amalgamation of habitats, decommissioned ships, and cannibalized spin stations. It includes maintenance docks, refueling stations, bulk cargo and container terminals, and a variety of facilities catering to the ship crews.   However, PSR is primarily an industrial settlement and offers little infrastructure for travelers who aren't voidbrood, shadows, or affiliated AI.

The station is under the command of Marshal Envy Last-of-the-Rotten, and the majority of the crew are Engineers. It's also home to a significant stationside security force, and a destroyer squadron led by the cruiser JNFV Unconditional Subordination.

The black hole is far too massive to generate any significant amounts of Hawking radiation. Tapping its rotation for power is complicated by the accretion disk and companion star, but that same interaction makes for both a fuel and power source all of its own.

The companion star hosts three Dyson rings in non-equatorial orbits. The power they generate is beamed to the two relays at the star's Lagrange points 4 and 5, and from there to the drift station. 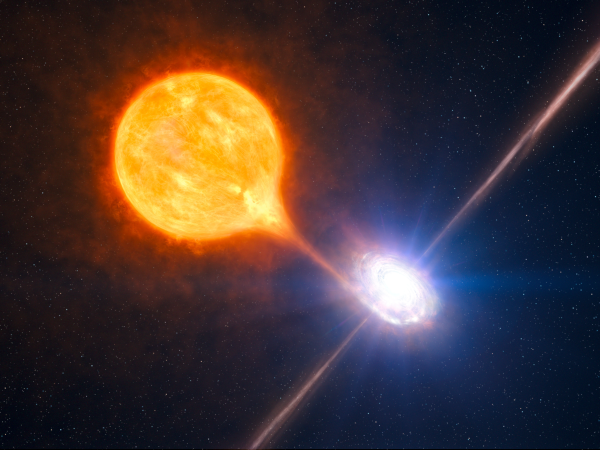 The accretion disk is rich in hydrogen and other fusion fuels. Autonomous havester swarms trawl the disk's outskirts and deliver their cargo to the drift station, to be stored there or distributed to spaceships or the nova reactors.   They're also equipped to shepherd the accretion disk and feed matter into the black hole to provoke x-ray bursts for the Nova reactors.

Two hybrid nuclear power plants are located above the poles of the black hole. Their primary purpose is to breed fission and fusion fuels.   Their secondary purpose is to generate power from x-ray bursts. Designed as scaled-down versions of Quasar reactors, they serve as a backup power plant for times of increased demand.
Find a term you're not familiar with?
Check out the glossary!
Constellation Monoceros

Site theme: "Modern Spaceships" by TJ Trewin, modified by Konstantin M.
Third-party content belongs to its respective owners and may be subject to different licenses.
Unless stated otherwise, NASA images are in the public domain, ESA images are under the ESA standard licence,
and both ESA/Hubble and ESO images are licensed under a Creative Commons Attribution 4.0 International License.

A space entry! I love this article so much! Its really nice to see a space like entry in this challenge full of fantasy entries( no offense to them though!) and i am absolutely stoked to know more about this system!   I really loved the technical details of this article! It really caters to me as a scientific sort of guy but i think that there just needs to be something to hook others. Perhaps some creepy event or phenomenon that makes this black hole system so creepy!   Anyways getting to the feedback part, i just want to say that all of what i am going to say are probably going to be personal observations. Feel free to discard them if they go against your voice!   1) Does this black hole system have anything that sets it apart from others?   2) How do the drones avoid being sucked into the black holes event horizon?   3) What is life like for researchers, workers and other personnel of the plaguestar league who are in the drift station?   4) Tell me more about the history of this place!   Now onto the formatting part! This is one part you can definitely skip entirely since again, this will be my personal views xD.   1) I think some of the more technical details likd the astronomical coordinates and magnitudes and stuff like that as well as the part about the life of Plaguestar personnel could go into the sidebar. Would look way better in my opinion!   2) A video with some space music at the very beginning of the article will be something very good to listen to and read this article with!   In conclusion, i can say that this article indeed is a great one! My feedbacking skills are horrid but i really hope i helped! Congrats my friend and keep up the worldbuilding! :D

Oh i forgot to say this but i love the map a lot! :D

Thank you very much for the feedback, and glad you like it!   The article isn't finished yet, I just got distracted by real life, so there are a few things I still want to add, incl some you mentioned.   I might not talk much on the harvester swarms in this article, bc I want to write a separate one on the technology, but that'll have to wait a bit bc I need to do more research. Most of the rest of your questions I should be able to include to some extent. We'll see.   As for the observation data, I put it in author's notes bc it's real-world meta. In-story, Earth is abandoned, so that data is mostly irrelevant (the coordinates may not be, but I've yet to decide if I keep that Earth-centric). It's just for us nerds who want to know where to find this system in the sky.   A video is a great idea, and I just remembered I made some music for this world (yes I forgot I made a soundtrack, I need sleep XD ), so Ill throw some of that in instead, heh.

Hi! I must say as an astronomer I really liked this article for keeping both the cool feel of a sci-fi space world and at the same time keeping the physics corrects and plausible :D   Really cool!

Thanks! I'm trying my best with the limited understanding I got, and I'm very happy it's appreciated.