Varic Berevan is an arcanist that worked in the Solis Heart Expedition guild. His time is spent nowadays as a member of the Guardians of Verx, assisting in matters of historical importance, be it cultural or otherwise.   He graduated from the arcane institute of Wadmia at the age of 23 and had a promising career in tutoring the arcane. Rather than that, Varic pursued a future in archeology and anthropology, specifically orc centered. His fascination with history is evident in his career path, working within the Solis Heart guild as an explorer, and reaching the esteemed rank of Professor within 5 years of employment. Among his discoveries were several tombs housing sequestered vampires, and historical records dating back to the ancient times of the Heartscar wars, around 1000~ AL.   Varic spends most of his time serving as supervisor, advisor and caretaker to adventuring groups within the Guardians of Verx faction, directly under Merriam's, the founder's, command. His goals remain inquisitive in nature, and most of his interests are still set in uncovering the truth that is hidden in the past. 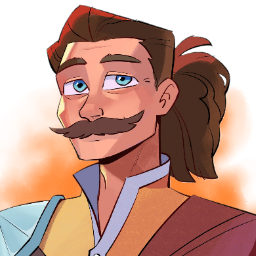 Varic is a rugged yet calm individual. He has ample patience and a positive outlook in most things. His experience in the arcane makes him a valuable member to the Guardians of Verx.