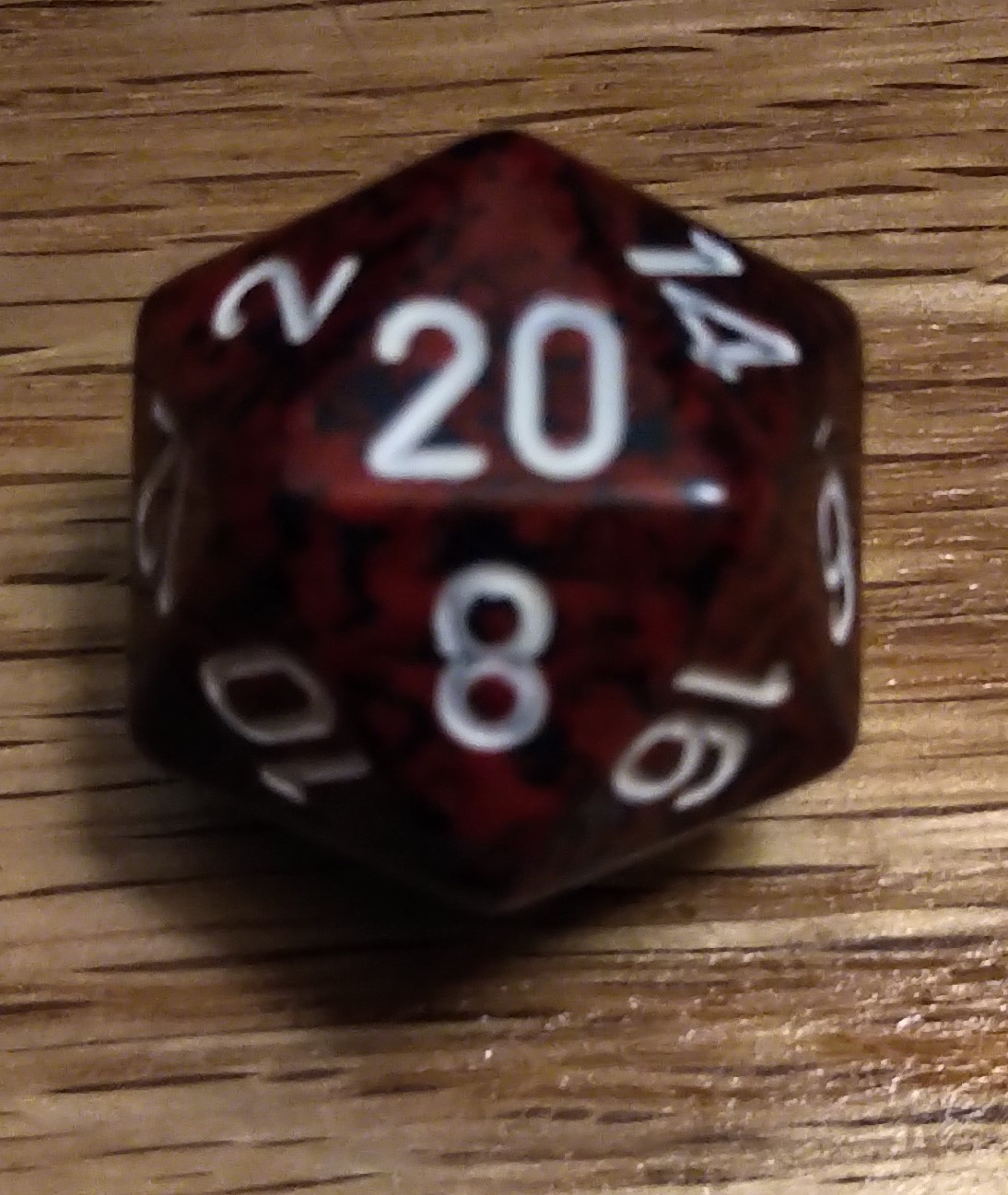 The goal of this system is to be simple, one-page system to pick up and put down, no matter if you are a veteran or new to dice systems. It is not meant to replace more intensive RPG systems (like Dungeons & Dragons or Eclipse Phase), it is more suited to games that just want a light addition of numbers and stats to the RP, to give a bit more structure to an otherwise Freeform RP.

Rolls will consist of utilizing D20 dice.
The number of dice available per stat is equal to the stat level, plus one: Stat Level + 1 = Number of D20s in Pool   For those already familiar with RPG Systems, the DC should normally be a value of 10. The table for success should look like this for most challenges: Under normal circumstances, take the highest die in a roll as the result. If under duress, take the second-highest d   Levels are reflective of one's natural abilities and are not meant to be earned often.   In addition to levels, skills and shortcoming are reflected in Proficiencies and Disadvantages. Each Proficiency gives a +5 in its respective field. Each Disadvantage gives a -5 in its respective field.   A Combined Roll is where more than one stat is challenged. The dice pools of each stat is combined and the result is taken as normal. (Hint: For story purposes, keep track of which dice belong to which stat, then you can mention which aspect pulls the player through the challenge.)

Vitality is the only skill that is auto-leveled and no points are put into this stat. It is reflective of your total level at all times.
From this stat, you can determine your Health and Exhaustion Points. - Health & Exhaustion -
Health is determined by (Vitality * 2). This is the number of times a character can take damage before they expire. The amount of damage received from different items can vary depending on the source. As a character is injured, add Damage until it meets or exceeds Health.
I.E. Damage vs Health : 0 / 6
Get punched for 1 Damage <
1 / 6 <
Exhaustion, like Health, is determined by the same equation, (Vitality * 2). Exhaustion is dependent on how much the character exerts themselves. Typically, exertion comes into play when the situation puts duress on the character and they put out deliberate effort to succeed. Similar to Health and Damage, add Exertion until it meets or exceeds Exhaustion.

The second Life Stat, Resilience increased a character's chances to defend against physical negative effects, I.E. Poison, Bleeding, Disease. Resilience can both be used to shorten the recovery time of bodily injuries and lower the degree of severity from some Damage-Over-Time effects.

The third Life Stat revolves around a character's mental fortitude. This is protection against mental types of effects, including but not limited to charms, intimidation, discouragement. Essentially, it is the ability to hold oneself together and keep focused on their goals. In some cases, this may involve forcing oneself to deliberately ignore certain facts just to get through something.

Probably the most straightforward of all the stats, Strength is one's raw might at their disposal. Their muscle and general ability to move objects or inflict force on their environment is covered in this state. However, it should be noted that Strength does not account for the smart application of it. Just using Strength alone to move a boulder would not factor in the idea of finding a tool and using a lever to augment the force applied to the boulder.

This stat covers long distance movements, full body stability, etc. The idea of having Agility is that you can move your self around your environment with ease.

The last Physical Stat handles manipulating one's environment on a small scale. It covers keeping a character's hands steady as well as being able to precisely and expertly control them to effect.

Raw data processing, memory, logistical handing. These sort of features are covered by Intelligence. An Intelligent character is able to take the data in front of them an manipulate, sort, organize, search, work with the information to achieve their goals. The limits to this are not being able to make leaps or connections that are not obvious.

Presence dictates the ability of a person to be in the moment. They can put themselves into an environment and be able to project themselves as well as take in their surroundings. This is useful for making observations and physically searching for desired targets of interest. This is used for charming or intimidation, as well as searching or spotting.

If Intelligence is the ability to put a puzzle together, Flexibility is being able to tell what the puzzle is a picture of before it is finished. Flexibility allows a character to examine the big picture, suspend rules of logic, and view or comprehend things from a different angle.

Below are a few examples of Proficiencies and Disadvantages that could be used. The third list are some flavorful special cases that cause other effects besides a +/-5 to a roll.

Join Versalis Discord!
All written works are owned by Micah J. Daniel (aka, Jim Vox or Hailed Manic) except where otherwise stated