Aeya normally appears to be a common, feral fox. Her fur is a soft cream color with white highlights.   When she is comfortable in her surroundings, Aeya will transform from her feral form to that of an anthro, eleven-tailed fox. In addition to the extra tails, Aeya's anthro form shows her with human-like hair reaching down to the middle of her back. 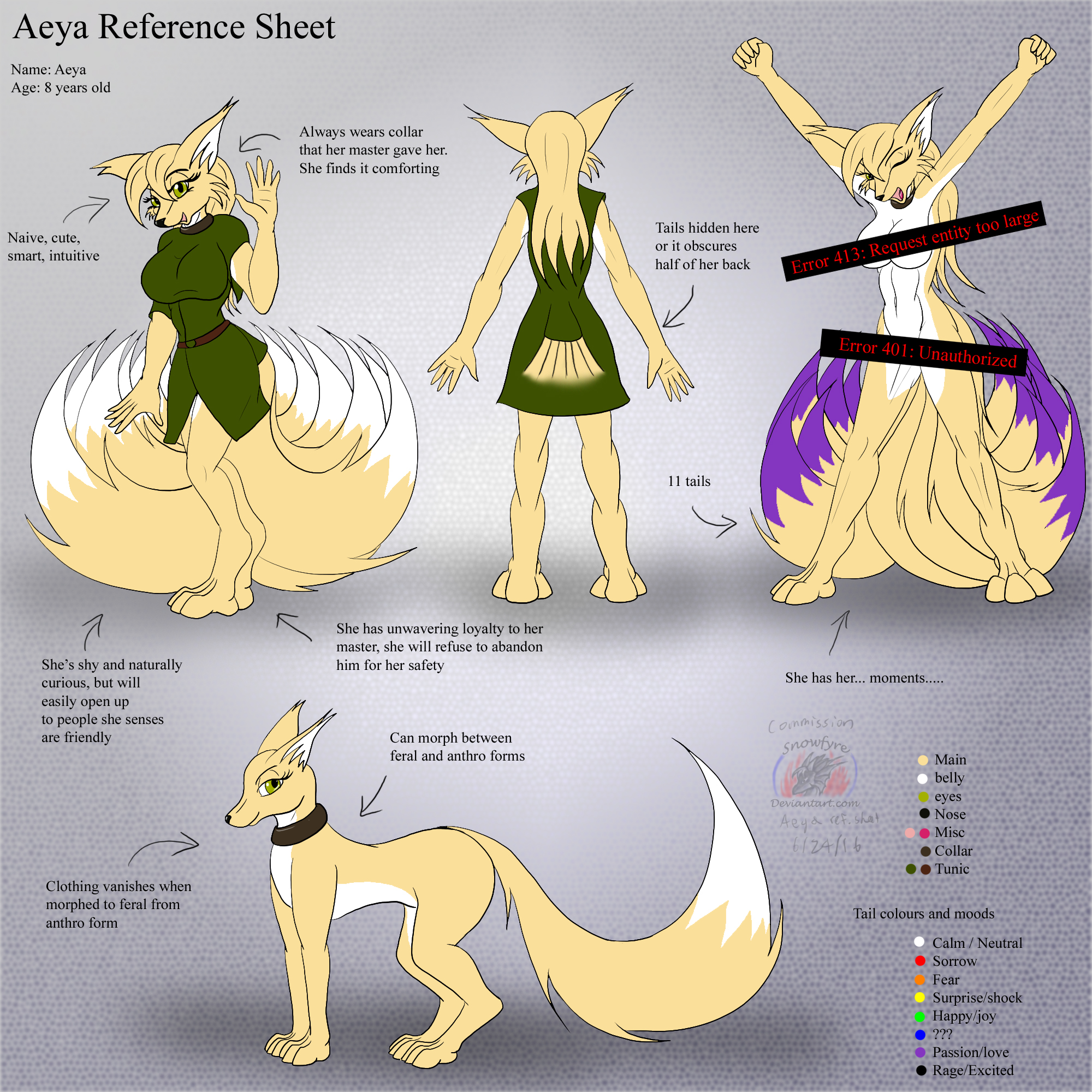 For what first seemed to be a simple pet fox, Aeya has displayed an array of different abilities. Shapeshifting is the first example, although it appears to be limited to two forms; feral and anthro. Additionally, there appearance to be a convenience attached to her clothing, vanishing whenever she shifts to her feral form and reappearing upon return.   Although she is not aware of it, nor seems to have control, Aeya has displayed imposing threats of magic while under duress.

At all times, Aeya wears a black, leather collar Magus put on her when he adopted the fox. She refuses to remove it under any circumstance, as it brings her much comfort and a sense of security.   When she shifts out of her feral form, whatever clothing she was last wearing reappears on her body. She wears a green, oversized shirted with a belt around the waist, like a tunic. It was gifted to her from Magus. Though she is comfortable without it, she wears it only because it is a gift from her master and that he insisted she wear it.

Aeya does not remember much of what happened before Magus found her. She vaguely remembers wandering in the forest, getting captured and put into a cage, then Magus taking her out. For almost her entire memory, she recalls Magus as always being her owner. He raised her well with much affection, leaving a steadfast loyalty for him in her. 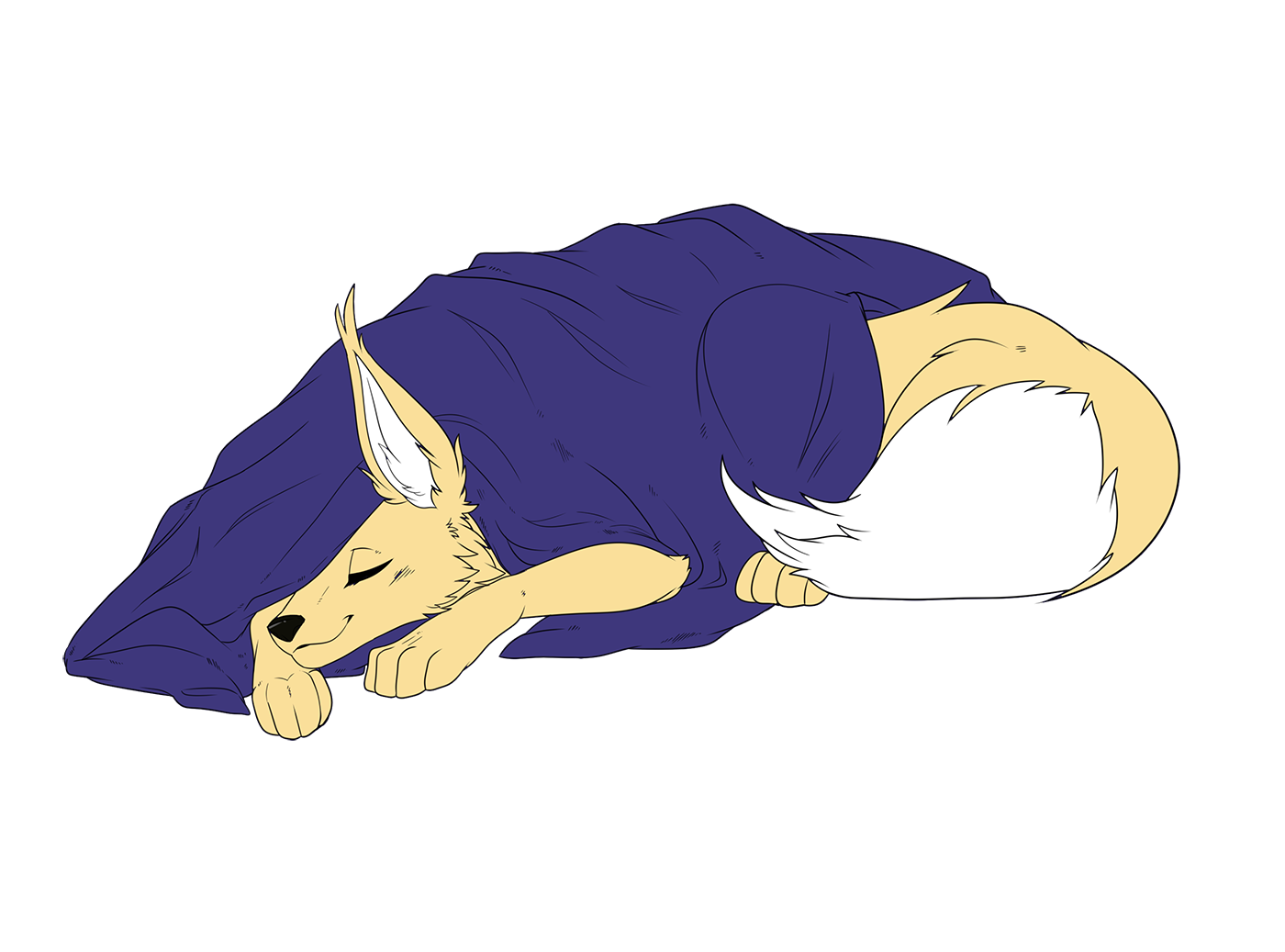 by Anon
After owning her for seven years, Aeya unintentionally shifted forms for the first time. She had no idea how the feat was accomplished, but was unperturbed by how strange it was. For the first time, she was able to verbally communicate back with Magus. Prior to that, the fox was only able to follow his around and obey his commands. People could tell she was an intelligent creature, but thought nothing of it.

Remarkably adept at learning and ready for development. Aeya is an avid reader, but has little in the way of practical experience. She can understand concepts and can receive deeper information from her naturally enhanced senses, but does not know how to properly apply the information.

Despite her appearance, Aeya is rather young in mind. Her lack of real-world experience gives her a brighter, if more shy, outlook on the world. There are plenty of concepts she has yet to learn about life. Until then, she maintains an innocent and naive perspective.

Magus has owned Aeya for seven years and essentially her whole life. She can barely remember any sort of time without Magus around as her master. Even with the addition of her new, anthro form into the relationship, she still sees him as her one and only master and owner. Whereas Magus tries to see and treat her as more of an actual person than a simple pet.

Join Versalis Discord!
All written works are owned by Micah J. Daniel (aka, Jim Vox or Hailed Manic) except where otherwise stated
Character Portrait image: by Alyssa Teumes
This article has no secrets.

Aeya is NOT to be lewded, save for specific circumstances. The little sweetheart deserves to be treated with kindness and respect.

Show spoiler
Those who must lewd her should only do so in a fashion that properly reflects her disposition. Improper lewding will not be condoned.
Please Login in order to comment!