To Comments
Interactive fiction running live now: Season 64 Sign-ups: Five Hundred Fun Ways to Die! & Rock Danger: Ask Me Anything. Participate as yourself or Subscribe to play as your own character in the universe of Vazdimet!

Seat of power of the Sparnell Fleet Command, the SAF Military Headquarters houses the greatest concentration of military military experience in the Confederation. Each member of the SFC maintains an office within the building, and the ability to project their will via hologram when otherwise engaged in fleet responsibilities in the field. The Grand meeting hall for strategic briefings and discussions also contains accommodations for attending in person or via holographic projection, often also joined by projections of the aloof Empress Rakethorne.   The majority of the building contains offices, communications centers for coordinating among the many fleets and planets under Confederation rule, and data crystal libraries holding a vast collection of military secrets and intelligence. The most defended building on the planet, its tyrellium shielded basement remains particularly inaccessible to all but the most trusted of SAF personnel. This is the Vault, holding the countless Oath Stones binding those who have sworn an Oath to bind themselves to the service in exchange for training or other promises.

The SAF Military Headquarters looms over the Sparnell capital, an imposing structure of black stone and reinforced one-way glass built atop the cliffside bordering the city. Its architectural lines stand as a harsh reminder of the brutal efficiency of the Sparnelli war machine. 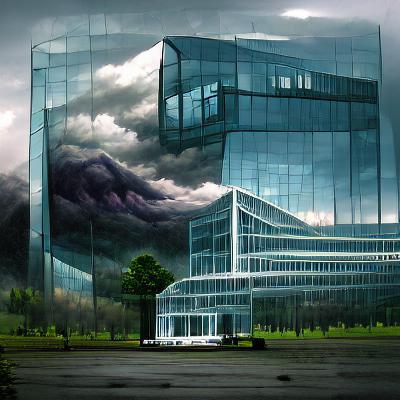 Answering: "a building associated with crime or justice"
Visit SolarCat02's Competition Page Check all other answers to this prompt Competition Homepage